Ilbery, London, No. 6900, Swiss, made for the Chinese Market, circa 1820. Very fine and extremely rare 18K gold and enamel, pearl-set, centre-seconds watch with special escapement. 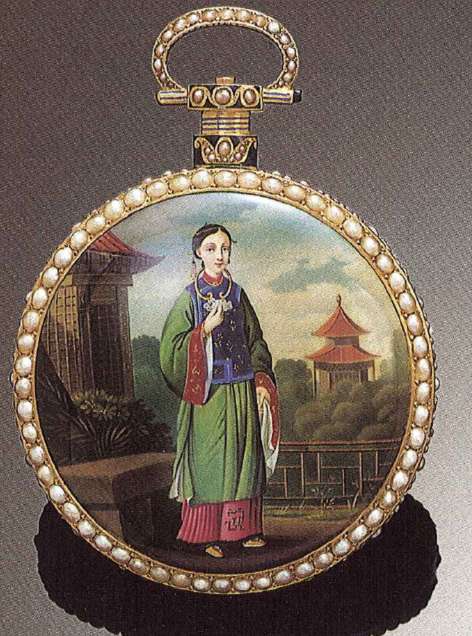 William Ilbery, London, recorded as working from 1780, diecl 1839. Specialised in watches for the Chinese Market, and worked closely with contacts itt Switzerland both for movements and enamel work. Strong commercial and diplomatic ties between Britain and the Chinese court ensured that many watches, despite being of Swiss origin, were signed with English names and marked London. Even the exceptionally talented Jaquet-Droz established a branch in London to take advantage of the China trade. The best period of watchmaking for the Chinese Market coincides with Ilbery's success - 1 790 - 1830 - and with the work of the finest enamel artists - Dupont, Richter, Lissignol etc. Almost without exception, the subjects depicted on these cases were taken either from classical mythology, Swiss landscape painting, or based on stories of an allegorical nature - Faith, Hope, Love etc. Examples with a portrait are virtually unknown for the time, and until the watch now offered for sale appeared, only one other was apparently known to have survived. At the Christie's auction of April 20, 1991 in New York - Important Clocks and Watches, lot 89 was a virtual pair to the current lot, but with the back panel depicting a portrait of a Chinese gentleman, also dressed in formal Court costume (present whereabouts currently unknown). Although not a pair in the generally accepted sense (ie. the identical subject but painted in reverse), they must originally have been commissioned for the saute customer and presumably the couple depicted in the portraits. Frequently sequential numbering of the movements can be found on 'pairs' of watches, but it does not appear to have been an infallible rule. Since there is no tradition of Swiss enamellers working in China at the beginning of the 19th century, it is interesting to speculate as to how the 'master' portraits were communicated to Europe. Towards the end of the 19th century, photography was used, and drawings do exist from the!860's or later (see A. Chapuis, l.a AVlontre Chinoise, Neuchatel, p.187, fig.148). In view of the rich colouring of the costume, and the incorporation of flecks of gold to simulate braid, it seems possible that the port r aits may have been taken from glass paintings, a technique that enjoyed considerable popularity in China. Plate glass mirrors were exported from Europe to be partially decorated with the same technique and returned for framing in the chinoiserie style.