Ilbery, London, No. 6094, made for the Chinese Market, circa 1815. The case enamelled by Victor Dupont. "Ulysses' farewell" Extremely fine and rare 18K gold and enamel centreseconds watch, with special escapement. 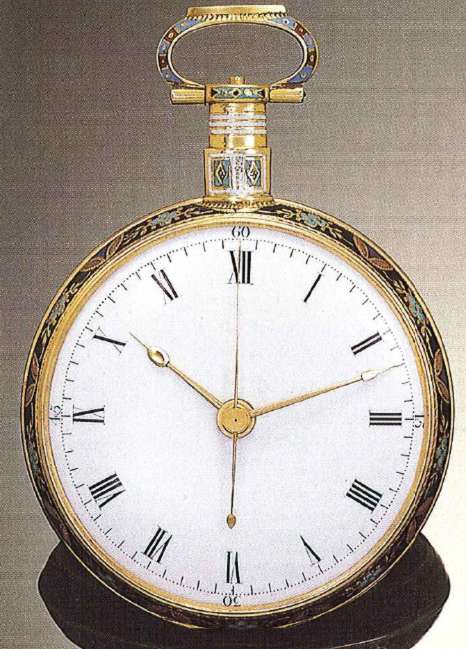 Dupont used to sign his best works only, therefore very few watches made for the Chinese Market, with enamel paintings signed Dupont are known to exist. This watch, in perfect condition, is certainly among the best examples bearing his signature. A particular feature of his work was his distinctive palette which may well derive from the fact that, like most of the best enamellers of his time, he used to mix his own colours. As opposed to most of the compositions of the other enamellers, also working in Geneva, such as Jean-Louis Richter, he also has a special ability to paint a group of figures placed in the foreground and filling most of the space available highlighting the expression of the characters and giving to the spectator the i mpression of being involved in the scene. Jean-Francois-Victor Dupont (1785-1863), probably the finest painter on enamel of his time, working in Geneva. His work included portraits of distinguished figures (King George IV, Henry VI etc..) as well as boxes and particularly watches destined for the Chinese Market. For the latter, he cooperated frequently with Ilbery as well as Piguet & Meylan. A particular feature of his work was his ability to paint a group of figures posed in the same plane without giving an impression of overcrowding. His distinctive palette may well derive from the fact that he mixed his own colours. William Ilbery, London (?-1839) Active in London from 1780 in Goswell Street, he moved to Duncan Terrace towards the end of the 18th century. Following James Cox in London and Jaquet-Druz in Switzerland, he too specialised in the production of luxury watches for the Chinese Market. His early production was very much in the English style featuring a full plate movement and an English type single wheel duplex escapement; however, for his watches of the highest quality, he incorporated a spring detent escapement. I'he cases were also very much in the style of those produced in England at the time. Later, along with Jaquet-Droz's Swiss production, signed in London, and that of William Anthony, who worked in London, the watch movements he produced were much inspired by the Lepine calibre with free standing barrel. In fact, he seta new standard for all watches made for the Asian Market. He organised the production of profusely engraved movements in Switzerland, mainly in Fleurier; he was followed in that by makers such as Bovet and Juvct who also worked in Fleurier (Val de Travers). Bovet and Juvet organised a mass procuction of silv er-cased watches and later, once their Canton manufactures were opened, they assembled these directly in China. Ilbery can therefore be considered as the "father" of "Chinese watches", as they are known today. The cases of his watches were decorated in Geneva by the best enamellers, such as Jean-Francois-Victor Dupont, who often signed his work, and Jean-Louis Richter, whose enamels were generally not signed. He seems to have maintained close contacts with the continental made since a watch signed "Ilbery Paris" is known and Ilbery & Son are recorded in London and Fleurier, other than in Canton. "Chinese watches" were often sold in pairs and therefore each pair was fitted in an especially designed box. Whenever such pairs of watches were enamelled, their ornaments were always painted in a symmetrically opposed manner, as in mirror images.