LOUIS BERTHOUD NO. 35 MADE FOR CAPITAIN NICHOLAS BAUDIN FOR HIS EXPLORATION OF AUSTRALIA Louis Berthoud Horloger de la Marine, No. 35, sold on 22nd October 1799 to the Marine Ministery for the use of Capitain Nicholas Baudin. Extremely rare and historically silver-cased important marine chronometer. Accompanied by the original fitted box, winding key, pusher, and two books (The Baudin Expedition and the Tasmanian Aborigines limited edition No. 684/1000 and The Journal of Nicolas Baudin 1800 to 1803). 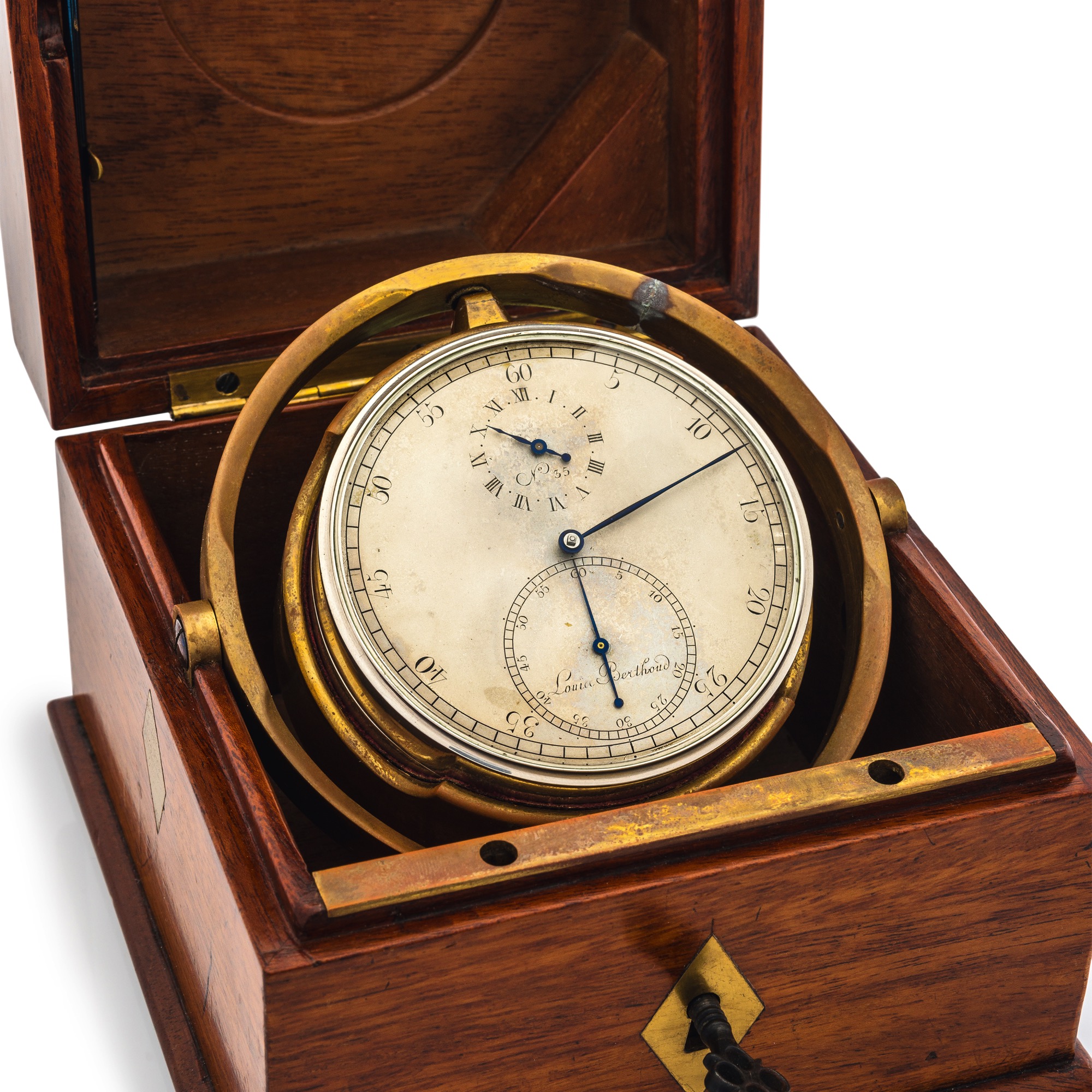 Signed on the dial, dial plate and pack plate. DIAL DIAM. 80 mm. DIM. 13.5 x 11.5 x 7.5 cm. CAPITAIN NICOLAS BAUDIN (1754-1803) was a famous French explorer, naturalist cartographer and hydrographer. After a long career exploring the world, he embarqued on his most famous voyage to map the coast of Australia on one of his two ships, the Geographe accompanied by his faitfhul Berthoud chronometer. He arrived in Australia in 1801 and mapped the Western and Southern coast as well as discovering more than 2500 new species. It was also a chance to meet the Aboriginal people that were unknown to most back then. After completing his voyage, he headed to Tasmania and eventually stopped in Mauritius where he died of tuberculosis. His legacy remains having 3 animals named after him and 8 monuments in his name in Australia. This rare early Marine Chronometer is recorded in his archives starting from 1798 (for further details see La Longitude en Mer by Sabrier, p. 515) before being delivered for the Australian expedition by Capitain Baudin. (1754-1813) The son of Pierre Berthoud, counsellor and master- clockmaker at Couvet, Pierre-Louis Berthoud (known as Louis Berthoud) was born in November 1754 in Placemont, Canton of Neuchâtel. At twelve, he began his apprenticeship in his father's workshop. He was hardly fifteen when his exceptional skill was noticed by his uncle, the famous Ferdinand Berthoud, who invited him to Paris to be initiated into precision clockmaking. Ten years later Ferdinand Berthoud retired to his property in Groslay, leaving his Paris workshop in the hands of Louis' brother Henry. On several occasions Ferdinand Berthoud had requested that his nephew be officially attached to his establishment, but the response was always negative. Disappointed, Louis Berthoud returned to Couvet. However, Henry committed suicide on June 29, 1783, and Ferdinand asked his nephew Louis to return to Paris to take over the business. Louis Berthoud seems to have arrived in Paris in the spring of 1784. On June 5, 1784, he became Elève Horloger Méchanicien de la Marine'. That same year Louis Berthoud married Thérèse Bezout, the niece and adopted daughter of Etienne Bezout, mathematician and member of the Académie des Sciences. It was not without some bitterness that Louis Berthoud worked in his uncle's shadow. In 1812, he wrote: "... I lived several years overwhelmed by the bitterest distaste. It is with a sentiment of the most profound recognition that I offer here to M. Monge, then Minister of the Marine, the respect and thanks that I owe to the goodness of his heart and to his fine spirit. I owe them also to M. Thevenard... for having helped me to emerge from the oblivion into which it seemed I should be for ever plunged." Berthoud produced a series of lever watches after examining one such watch produced in England by Josiah Emery, and also a watch made in France on the same principles. However, he soon abandoned the lever escapement in favor of the detent. He chose a pivoted detent escape-ment for a pocket longitude watch delivered to Chastenet de Puységur in 1787. Finally in 1792, following a proposal by the Bureau de Consultation, the Minister of the Interior awarded Berthoud the maximum prize of 6000 livres with distinction in the first class of national premiums for this watch. The mechanism of the watch, which is of an entirely new conception, is described by Louis Berthoud in a sealed document deposited in the Académie des Sciences 9 May 1792. It was the sum awarded by the Minister that allowed Berthoud to gain his professional independence. In 1804 the Ecole d'Horlogerie de la Marine was founded. Seven pupils of the Ecole Impériale des Arts et Métiers at Chalons were chosen to be instructed at government expense. Following the Imperial Decree of 10 March 1806, Louis Berthoud was charged with the training of four of these pupils, Motel, Henriot, Saulnier and Laurent. In 1812 Louis Berthoud published his "Entretiens sur l'horlogerie à l'usage de la Marine". In this short book, published a year before his death, Berthoud lavished on his pupils, in twelve "conversations", his last recommendations and advice, for exercising with success the difficult métier that they had chosen. Louis Berthoud had two sons: Jean Louis Simon Henri, usually called Louis like his father, (1793-1880), who on 17 April 17, 1819 married Thérèse Joly, the daughter of a watch-case maker; and Charles Auguste, (1798-1876), who married the second daughter of the same watch-case maker, Henriette Pauline Joly, on January 26, 1822. Louis Berthoud died at Chaillot 18 September 1813 at the age of 59.