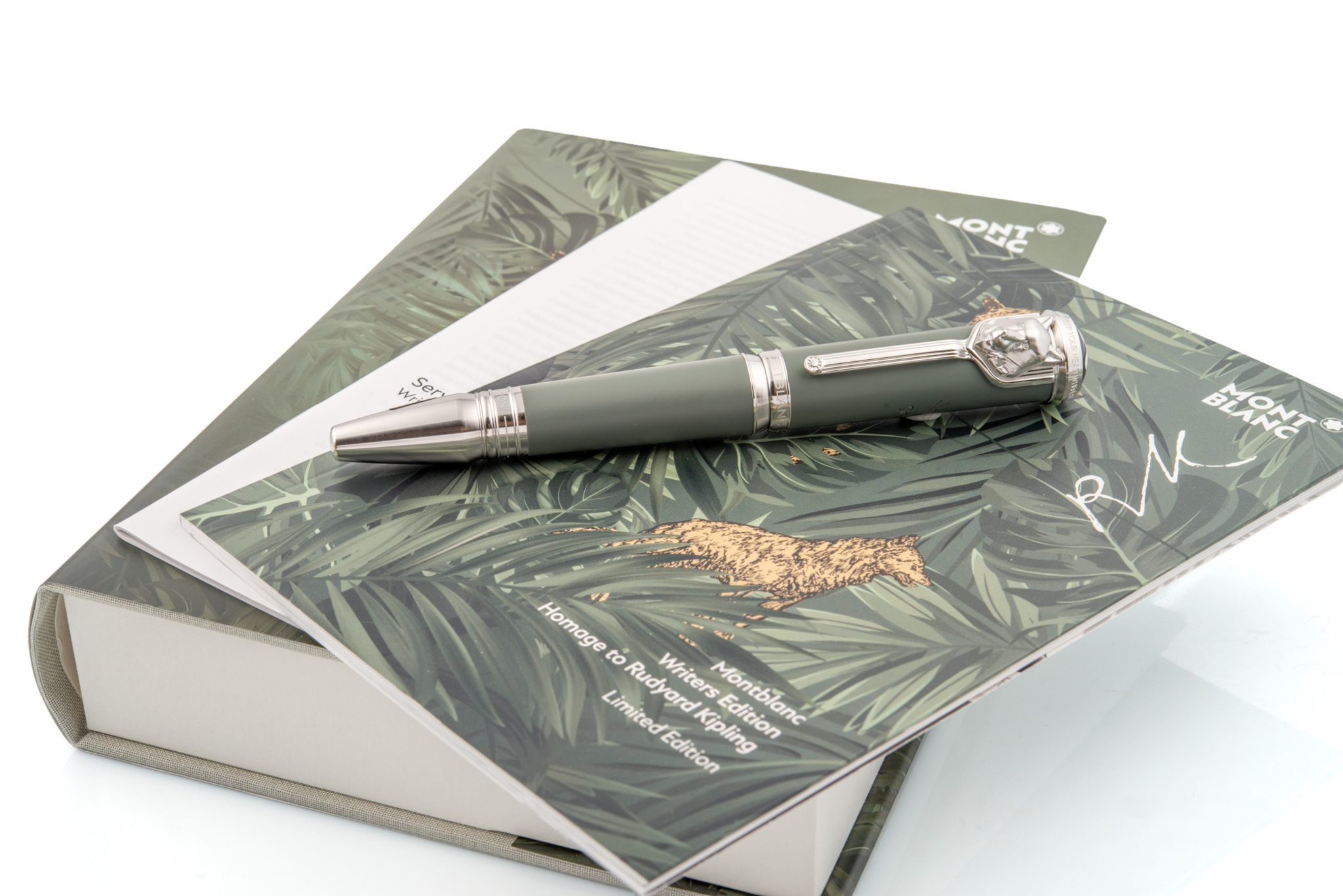 Montblanc, “Rudyard Kipling”
Montblanc created this pen in 2019 in honour of Rudyard Kipling (1865-1936), in a limited and numbered edition of 9 800 examples. The twenty-eighth of Montblanc’s “Writers Edition”.
The pen’s design evokes The Jungle Book, the Kipling’s major Work. The barrel and cap are crafted from precious jungle-green resin combined with platinum-plated attributes, whose elegant wolf’s head on the clip refers to the wolf pack that welcomed little Mowgli.
The ball-point-pen was produced in a limited and numbered edition of … 000 examples.
The mechanical pencil was produced in a limited and numbered edition of … 000 examples.
A set of three writing instruments, comprising a fountain-pen, a ball-point-pen and a mechanical pencil, was produced in a limited and numbered edition of … 000 examples.
--
Kipling, Joseph Rudyard
December 30, 1865 – January 18, 1936
English journalist, short-story writer, poet, and novelist. He was born in India, which inspired much of his work. Kipling’s works of fiction include The Jungle Book (1894), Kim (1901), and many short stories, including The Man Who Would Be King (1888). His poems include Mandalay (1890), Gunga Din (1890), The Gods of the Copybook Headings (1919), The White Man’s Burden (1899), and If– (1910). He is seen as an innovator in the art of the short story. His children’s books are classics; one critic noted “a versatile and luminous narrative gift”. Kipling in the late 19th and early 20th centuries was among the United Kingdom’s most popular writers. Henry James (1843-1916) said “Kipling strikes me personally as the most complete man of genius, as distinct from fine intelligence, that I have ever known”. In 1907, he was awarded the Nobel Prize in Literature, as the first English-language writer to receive the prize, and at 41, its youngest recipient to date. He was also sounded out for the British Poet Laureateship and several times for a knighthood, but declined both. Following his death in 1936, his ashes were interred at Poets’ Corner, part of the South Transept of Westminster Abbey. Kipling’s subsequent reputation has changed with the political and social climate of the age. The contrasting views of him continued for much of the 20th century. Literary critic Douglas Kerr (University of Hong Kong, Honorary Professor of English) wrote: “[Kipling] is still an author who can inspire passionate disagreement and his place in literary and cultural history is far from settled. But as the age of the European empires recedes, he is recognised as an incomparable, if controversial, interpreter of how empire was experienced. That, and an increasing recognition of his extraordinary narrative gifts, make him a force to be reckoned with.”.