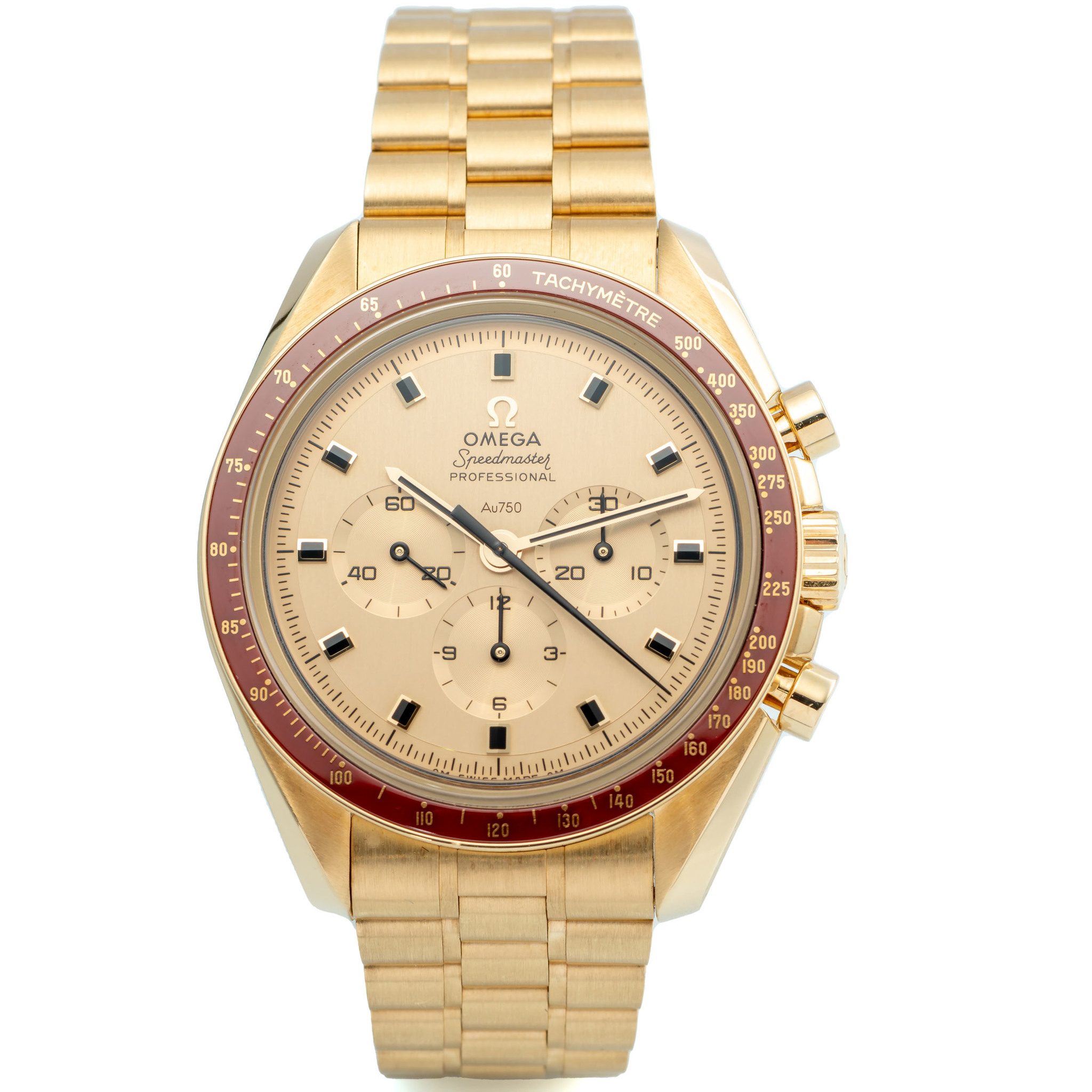 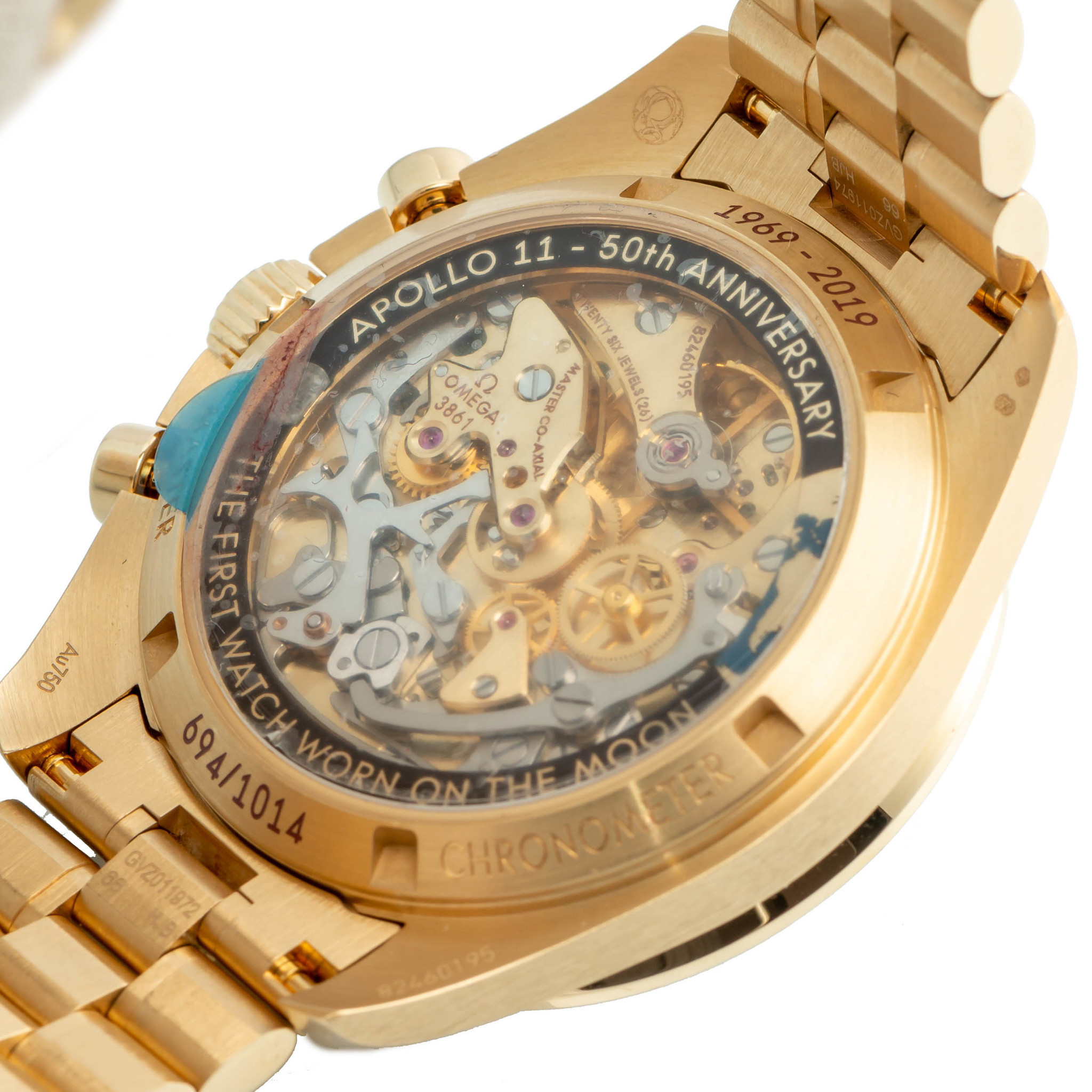 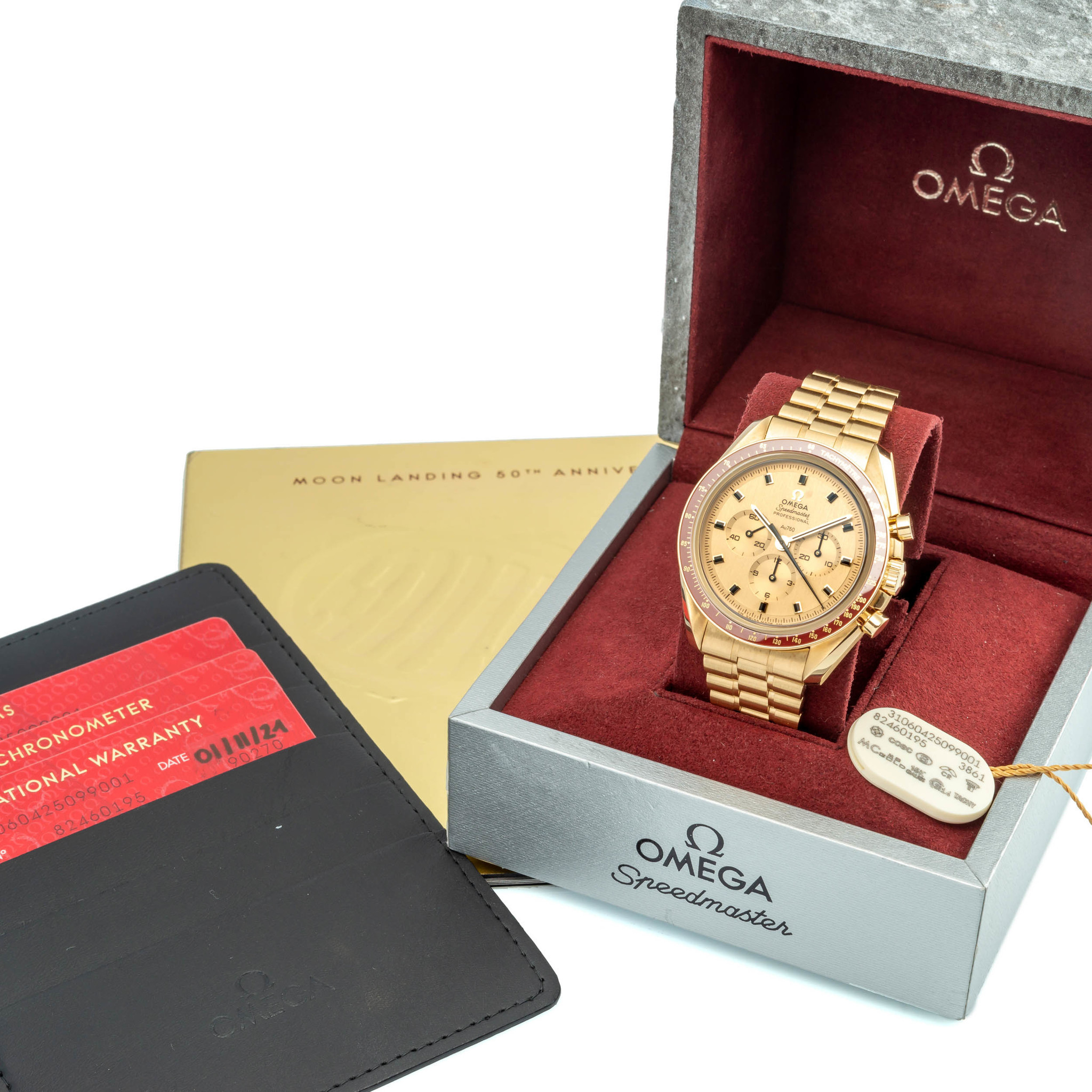 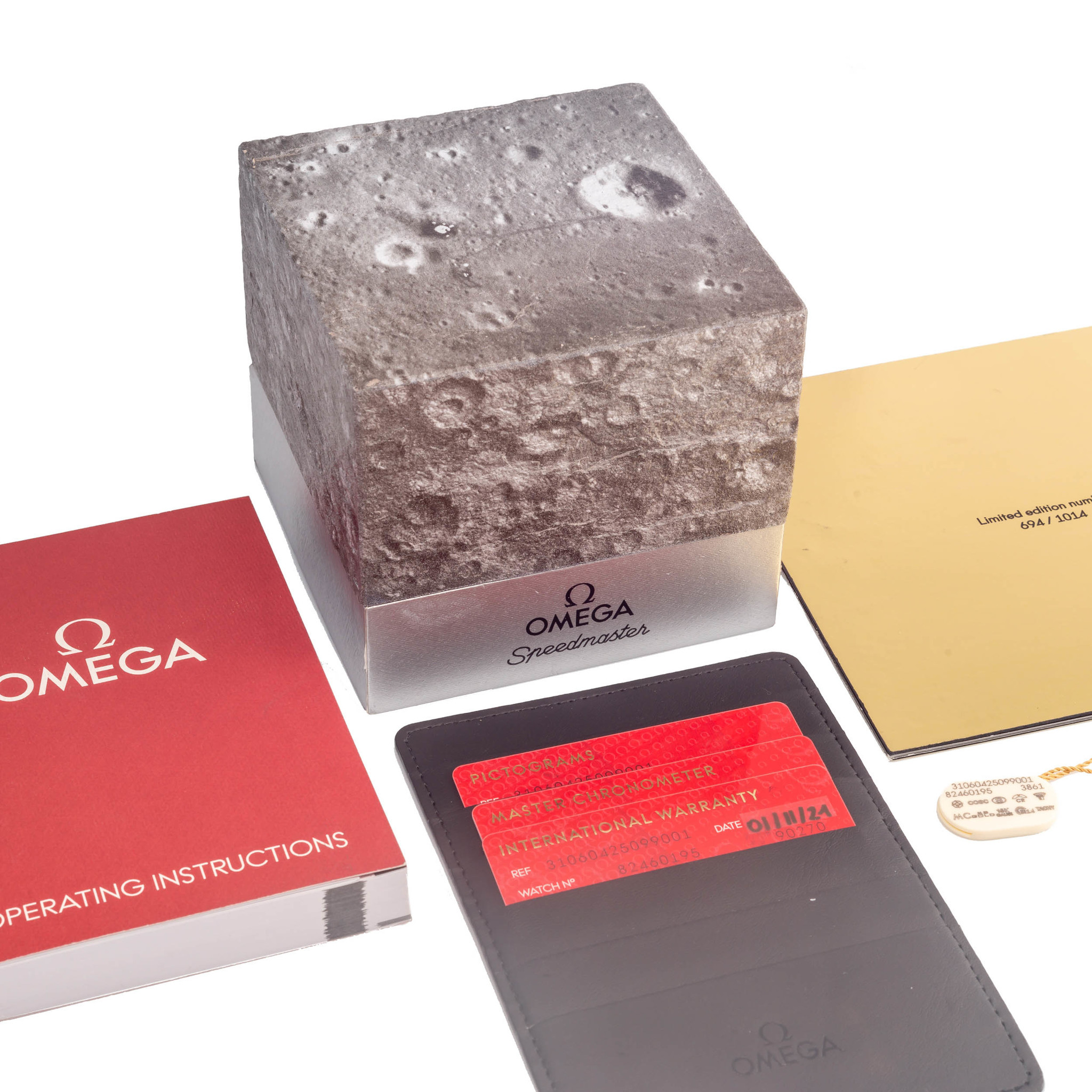 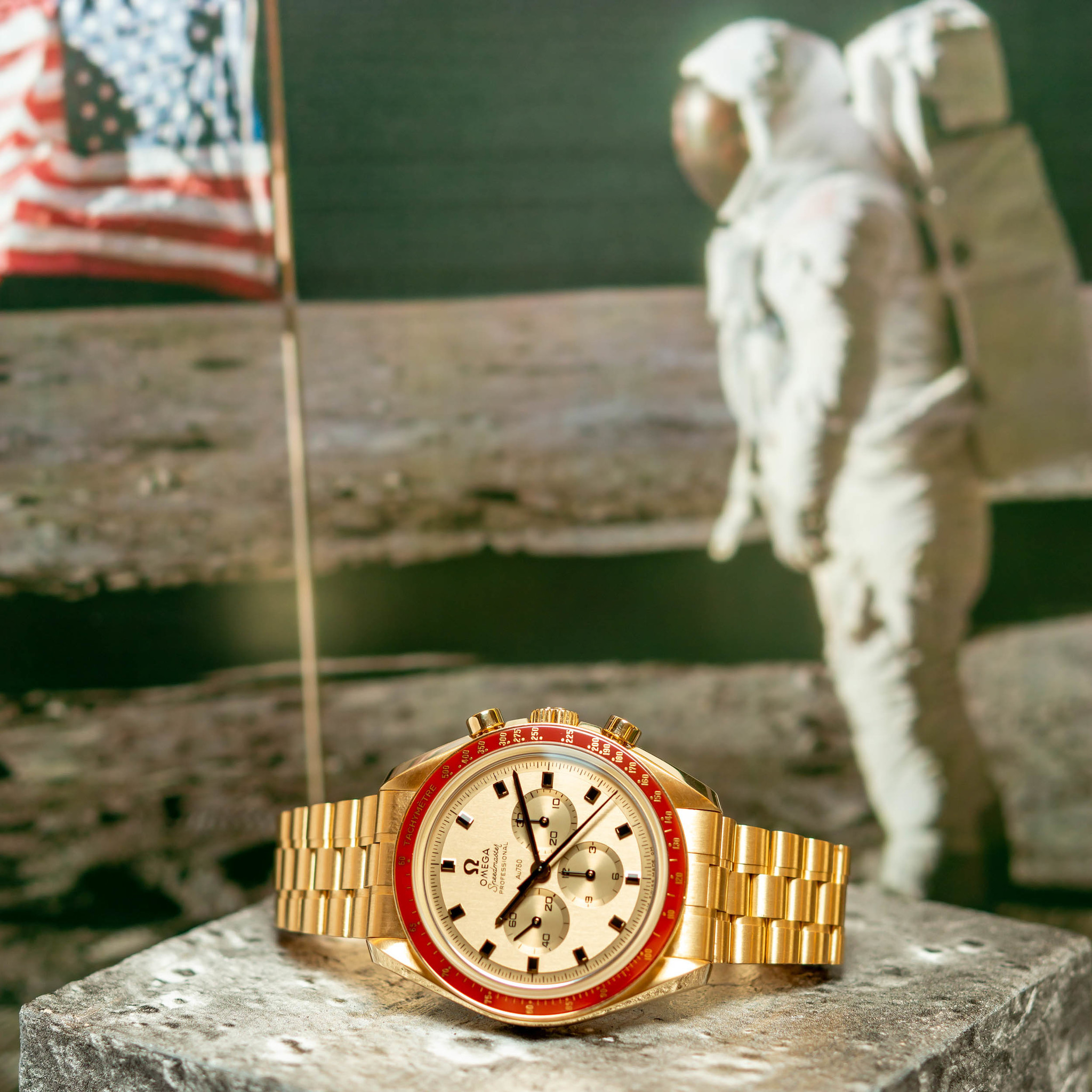 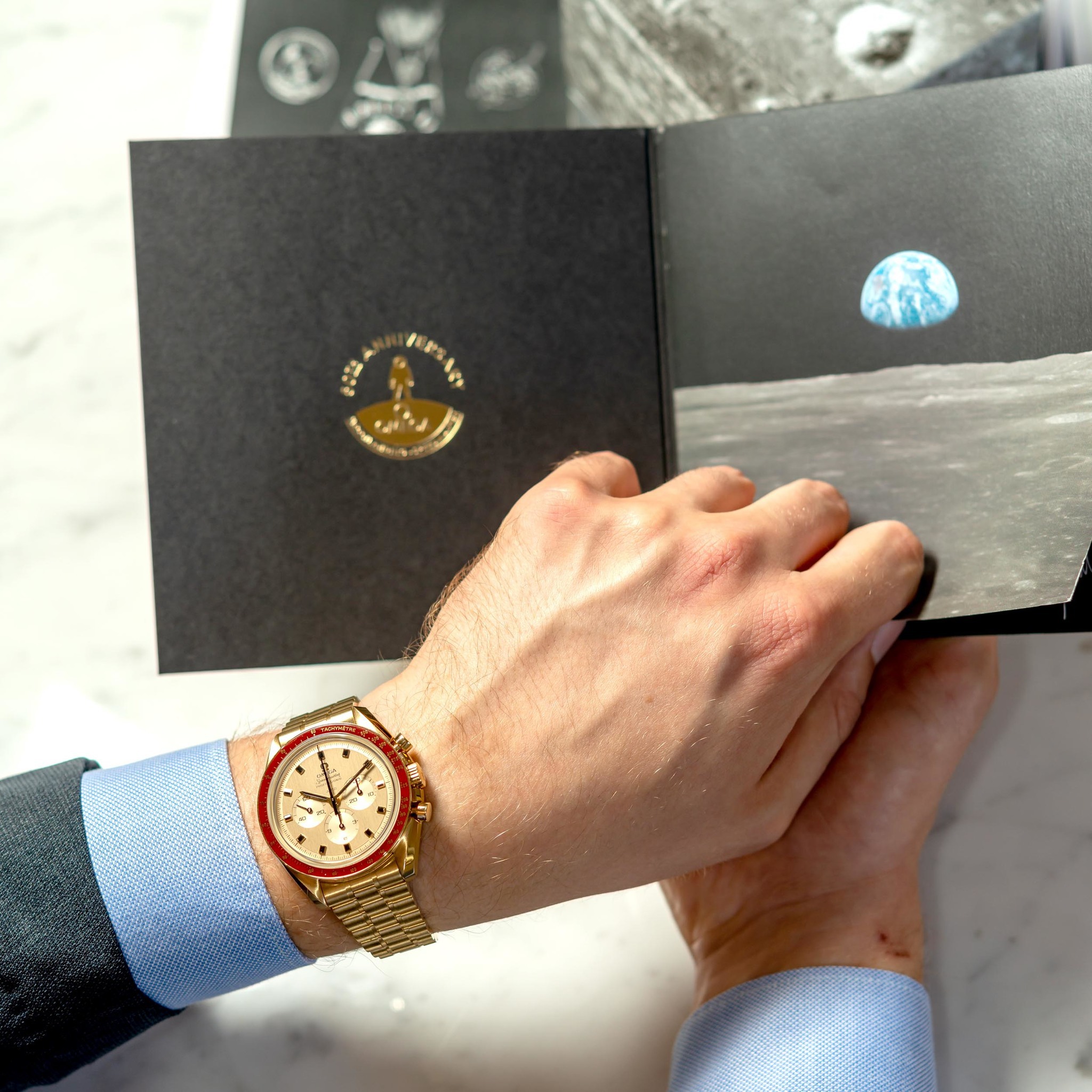 Omega introduced its first “Speedmaster” chronograph in 1957. From 1962, NASA acquired several chronographs from famous manufacturers such as Rolex, Hamilton, Longines and Omega. It is only two years later that an official call for tenders is launched. Becoming the symbol of the space conquest, the choice of the “Speedmaster” was therefore the fruit of a long reflection and heavy specifications from NASA. It became a milestone in the watchmaking history when Buzz Aldrin walked on the moon wearing a “Speedmaster Professonial”.
Marking the Golden Anniversary of the Omega watch that was gifted to astronauts in 1969 to celebrate the first moon landing, Omega has produced this "Speedmaster", Ref. 310.60.42.50.99.001, limited to 1 014 pieces,
It has been designed as an homage to the full gold “Speedmaster” Ref. BA145.022 which was produced at 1 014 pieces from 1969 to 1973.
This new watch is driven by the manual-winding Omega Master Chronometer Calibre 3861 with Co-Axial escapement.
18K Moonshine™ gold has been used to create this commemorative timepiece. The vertically brushed step dial, also in 18K Moonshine™ gold, includes facetted onyx hour markers. Inspired by the piece of 1969, a few touches of burgundy have been added, including the ceramic bezel ring, the markings on the case-back and the movement.
Besides, it differs from the vintage version with a very decorative sapphire-crystal case-back. The outer ring is engraved with “1969-2019” and the limited edition number in burgundy.
The inner decorative case-back ring, crafted from 18K Moonshine™ gold and blackened, features a partial world map of the American continent and a domed lunar meteorite inlay, representing the true proportions of the Earth and the Moon.
--