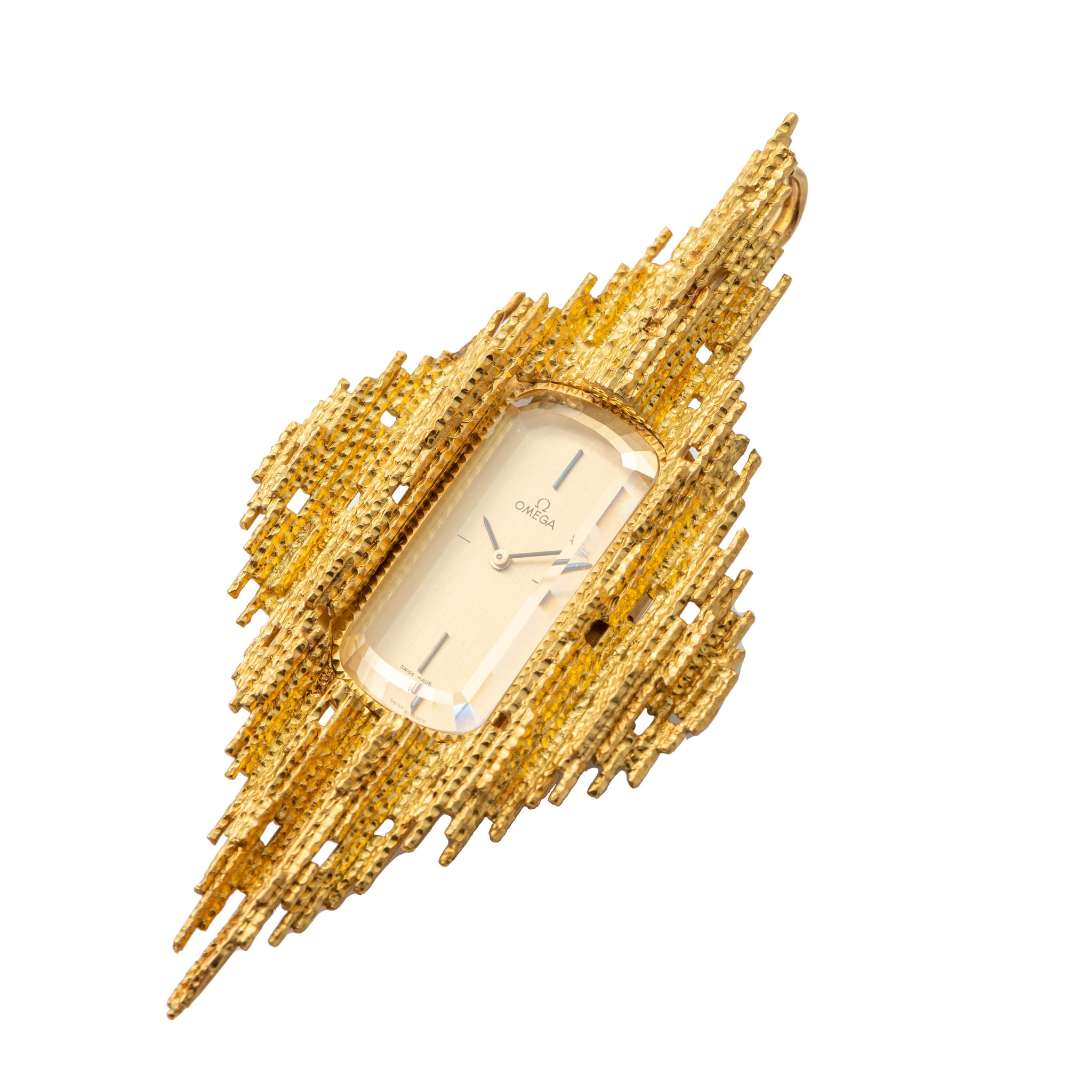 Property of the original Swiss lady

Andrew Grima (1921-2007)
one of the most innovative designers of his time, his cutting-edge designs drew clients such as Jacqueline Onassis, Ursula Andress, Princess Margaret, and the Queen. One day, as he was working in the accounts room of his father-in-law's small jewelry workshop, two salesmen arrived bearing suitcases bulging with Brazilian jewels, including vast quantities of aquamarines, amethysts and citrine. Grima persuaded his father-in-law to buy the lot, and used them to design his first collection. The results - rugged, sculptural and textured- were original and refreshingly unlike the set pieces depicting small animals or insects then in fashion. Grima favored a rougher look, using large stones to create texture. He preferred gold to silver and never made any piece in great quantity.
His designs were stimulated by a landmark show of modern art, sculpture and jewelry organised in 1961 by the Worshipful Company of Goldsmiths. Vogue photographer Lee Miller brought in art by Picasso, and works were commissioned from contemporary sculptors including Kenneth Armitage and Elisabeth Frink. Grima transformed their work into jewels, submitting original designs too. His fame was consolidated by his friendship with Lord Snowdon. Impressed by Grima's abstract, bold designs, Snowdon bought pieces for his wife, Princess Margaret. In 1966 Prince Philip gave the Queen a Grima brooch of carved rubies from an Indian head ornament, mounted on molten gold and diamonds. This piece, one of a 12-piece collection that won the 1966 Duke of Edinburgh prize for design, was worn by the Queen for her 2007 Christmas Day speech, the day before Grima's death.

In 1966 Grima was granted a warrant to supply the Royal Family with jewelry. That year he won the Queen's Award for Industry and opened his first shop in Jermyn Street. Designed by his architect brothers Godfrey and George, the exterior featured organic latticework of steel and slabs of slate, with display windows resembling brilliant jewels. The two-floor interior featured a spiral Perspex staircase. The shop was called a jewel of modern architecture in its own right. In 1969 Omega commissioned Grima to make 85 unique watches in a collection called About Time, with each timepiece encased in a gemstone rather than in glass. Grima called this "the greatest challenge of my career", saying his aim had been "to see time through stones". Grima opened galleries in New York, Sydney and Tokyo. In the 1960s and 70s he produced theme collections with titles such as Rock Revival, Supershells, and Sticks and Stones. Between 1964 and 1976, he won 11 De Beers Diamond International Design Awards. In 1986 Grima resigned his royal warrant and emigrated with his wife to Switzerland. Andrew Grima died in 2007 at the age of 86.