Very fine and extremely rare, cushion-shaped, large, water-resistant to 30 meters, platinum military-type divers wristwatch with Rolex movement.
Made in a limited edition of 60 pieces in 1997 to commemorate the first production of Radiomir Panerai watches for the Italian Navy in 1938. 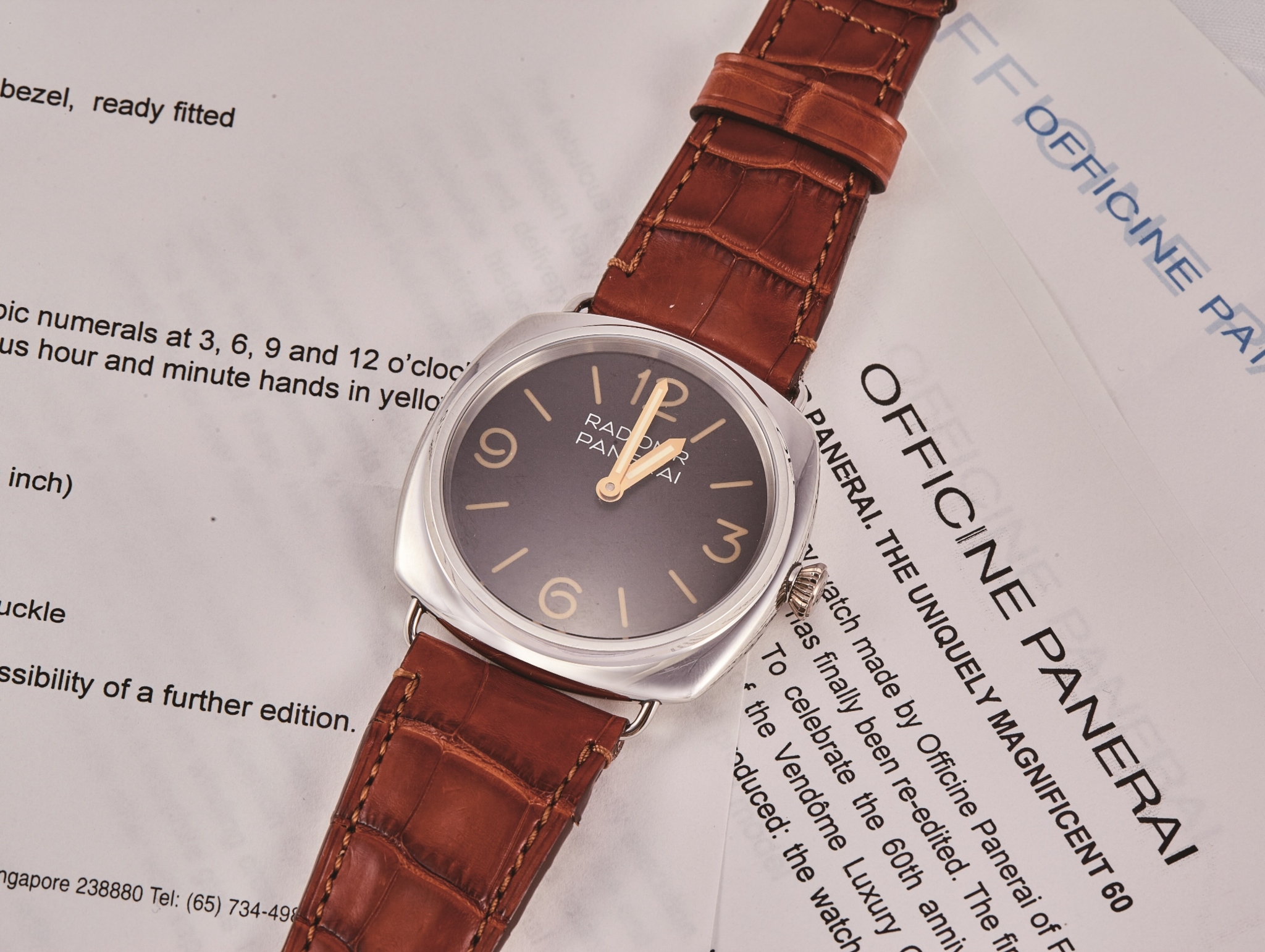 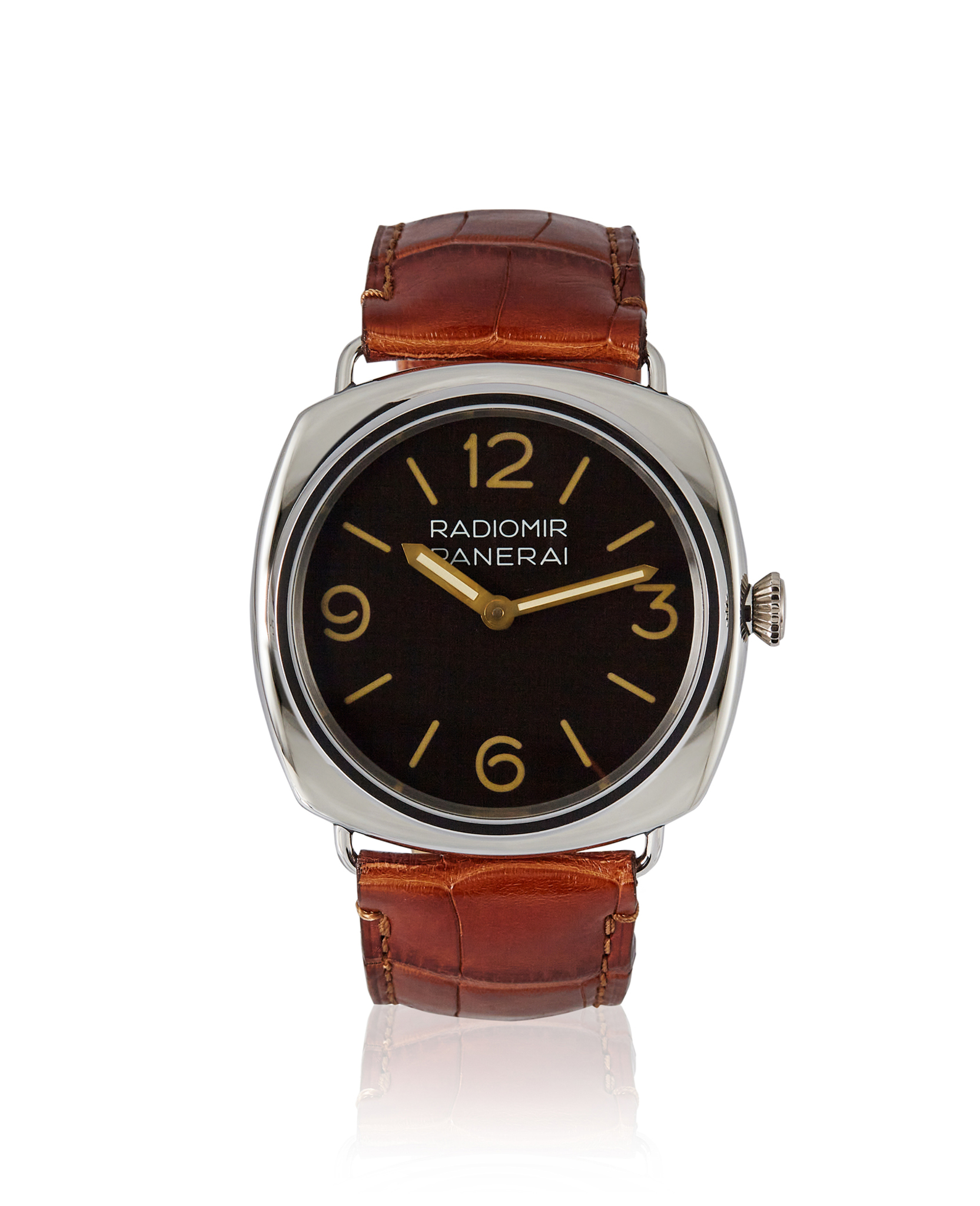 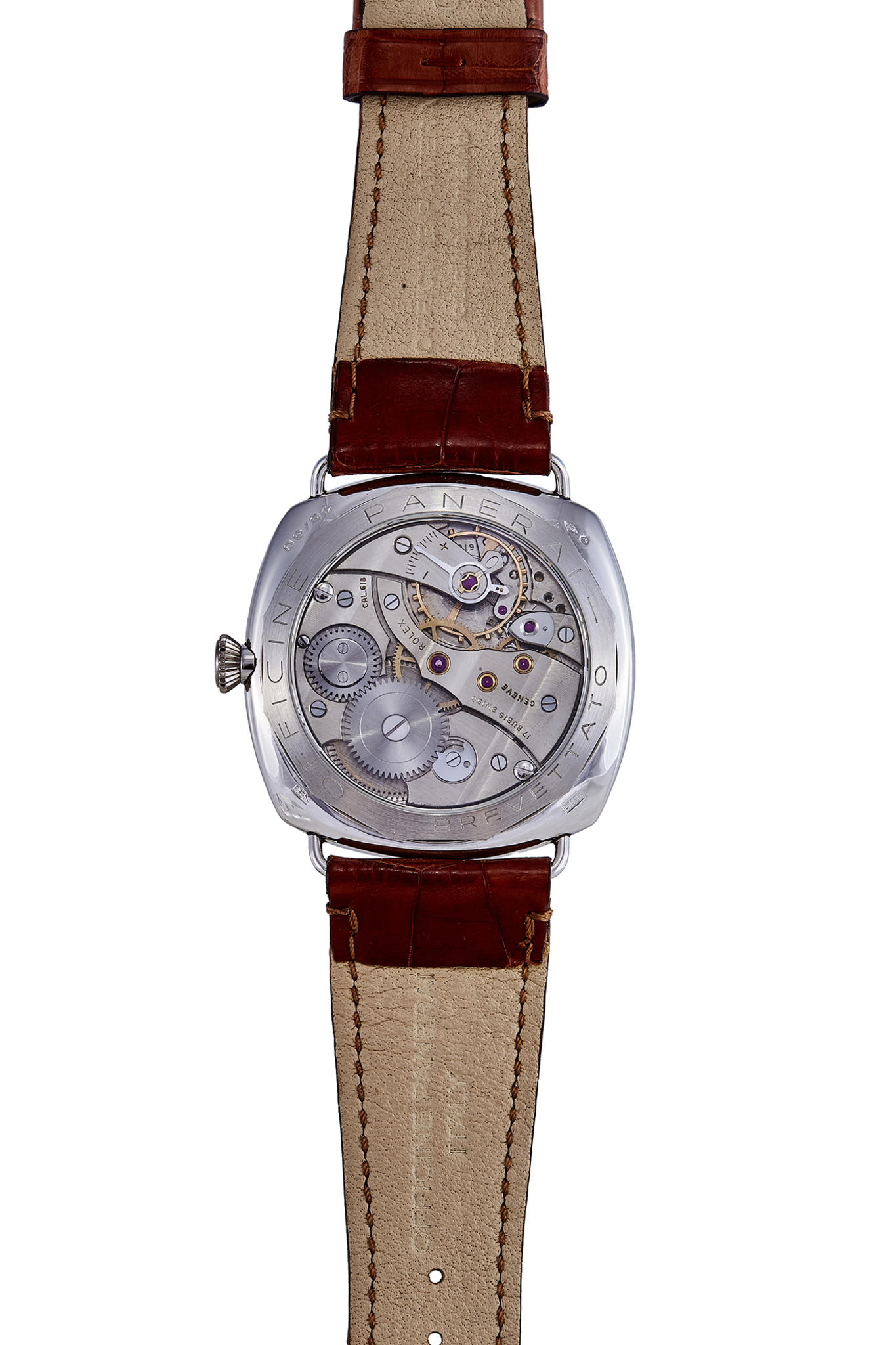 RADIOMIR PANERAI. THE UNIQUELY MAGNIFICENT 60
The fabulous Radiomir returns. The legendary watch made by Officine Panerai of Florence for commandos of the Italian Navy during the Second World
War has finally been re-edited. The first prototypes appeared in 1936 and delivery to the Navy began in 1938. To celebrate the 60th anniversary of the
birth of this remarkable historic watch, Officine Panerai, part of the VendOme Luxury Group, decided to create an exclusive platinum limited re-edition
of the first model produced: the watch which founded the dynasty of Panerai Radiomir and Panerai Luminor watches.
This is no ordinary edition of a particular design in a costly execution. Indeed, this edition actually uses the same Rolex movements as the Panerai
watches made at the end of the 1930s: a 16-ligne hand-wound calibre with 17 jewels, a winding reserve of 41 hours and a balance making 18,000
alternations per hour. The last 60 of these historic movements, still in their original packaging, had remained in the Panerai warehouse for over
half a century.
The case is 45 mm (1.75 inches) in diameter, made to the same design as those worn by the Italian commandos in their early exploits. Of cushion form
with rounded surfaces, the case weighs 124 grams (over 4 ounces) and has a screw-down winding crown and wire loop strap attachments welded to
the case band. The bezel, also platinum, has a sapphire glass 1.10mm (nearly 1120inch) thick; two screw backs are supplied, one of solid platinum
and the other with sapphire glass window through which the movement can be seen.
The dial is the typical Radiomir Panerai one with large luminous Arabic numerals at the four cardinal points and baton hour markers, guaranteeing
extraordinary visibility in all lighting conditions and also in complete darkness.
The dial plate has been executed in tobacco brown that reproduces the shade assumed by very old watches as a result of oxidation or prolonged
exposure to the sun. Instead of the brass used originally, the hour and minute hands are made of gold, further emphasizing the great value of this
exceptional platinum limited re-edition of the Radiomir Panerai.
Only 60 pieces are being produced for the world with delivery in April 1998 and each one is strictly numbered. Water-resistant to a depth of 30 metres
(98 feet) and fitted with a hand-sewn crocodile leather strap and Panerai white gold buckle, the platinum Radiomir Panerai limited edition is guaranteed
for two years.