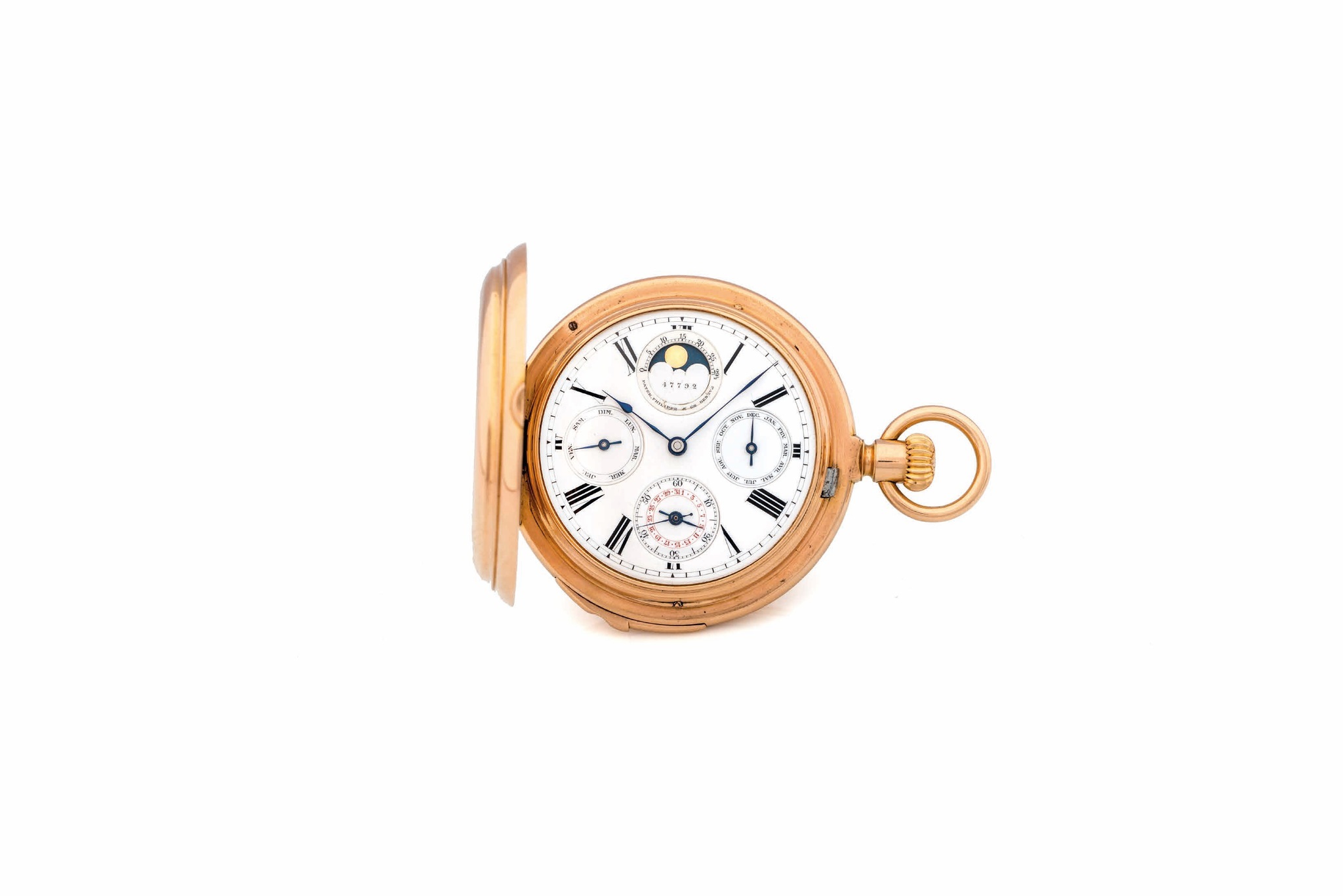 Patek Philippe, watches with perpetual calendar From 1874 to 1889, Patek Philippe perpetual calendar watches were all slightly different from each other, as the company worked towards perfecting the complication. In this field, the work of Jean-Adrien Philippe (1815-1894) will lead in 1889 to a new invention: the instantaneous and simultaneous jump of the calendar discs. The Genevan manufacturer Patek, Philippe & Co. will obtain for this very clear improvement a Swiss invention patent on May 23, 1889 (No. 1 018). The system of the present watch, manufactured in 1875, is already with a “primitive” instantaneous device, probably made on an ebauche of D. L. Golay (Geneva or Vallée de Joux). It is one of the stages which from the perpetual calendar with retrograde (fly-back) date leads to the invention of 1889. Güell i Bacigalupi, Eusebio Barcelone, December 15, 1846 Barcelone, July 8, 1918 Eusebio Güell is the son of Joan Güell i Ferrer (1800-1872), a wealthy industrialist from Torredembarra (Tarragona) who amassed a considerable fortune on the island of Cuba and ran a number of commercial activities in the city of Barcelona. His mother is Francisca Bacigalupi i Dolcet, a descendant of an ancient family of Italian merchants from the Republic of Genoa who immigrated to Catalonia at the end of the 18th century Güell is an entrepreneur who profited greatly from the industrial revolution in Catalonia in the late 19th century. He’s known for his friendship with architect Antoni Gaudí (1852-1926). Güell used Gaudí’s unique architectural vision to build a utopian town on the outskirts of Barcelona, including Gaudí’s crypt of the Colònia Güell and the famous park Güell. In 1919, he built the Pedralbes Palace, which he later donated to Alfonso XIII (1886-1941), King of Spain (1886-1931). He is knighted “Count of Güell” in 1908. Eusebi Güell married in 1871 Luisa Isabel López Bru (1851-1924), daughter of the Marquis de Cormillas, with whom he has 10 children: Isabel, Maria Lluïsa, Juan Antonio, Maria Cristina, Eusebi, Claudi, Santiago, Francesca, Josefina and Mercè. His elder daughter, Isabel Güell and López (1872-1956) became a noted composer. His third child, Juan Antonio Güell y López (1874-1958), will inherit the titles of Count of Güell, Earl of Ruiseñada and Marquis de Cormillas before embarking on politics and becoming Mayor of Barcelona.