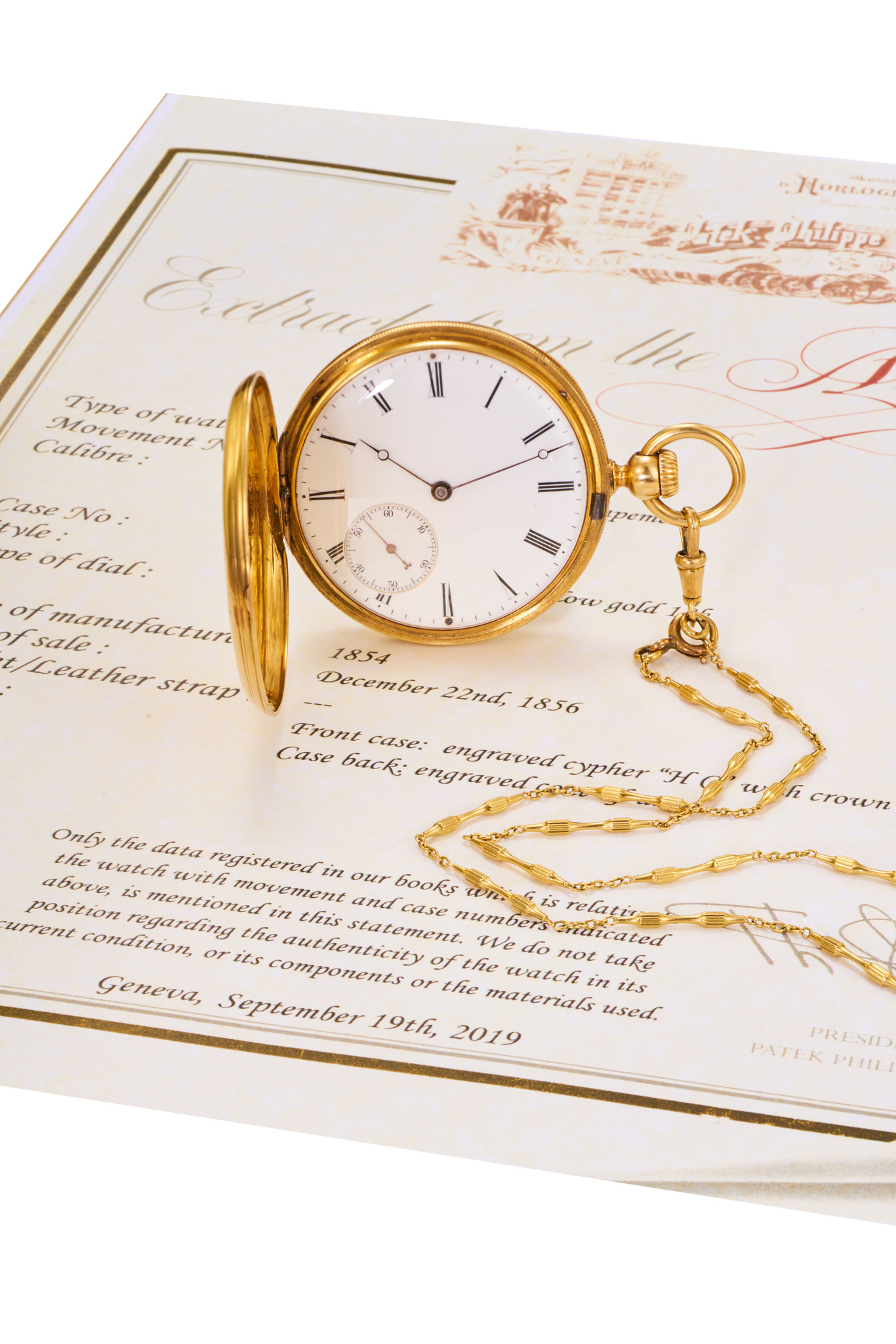 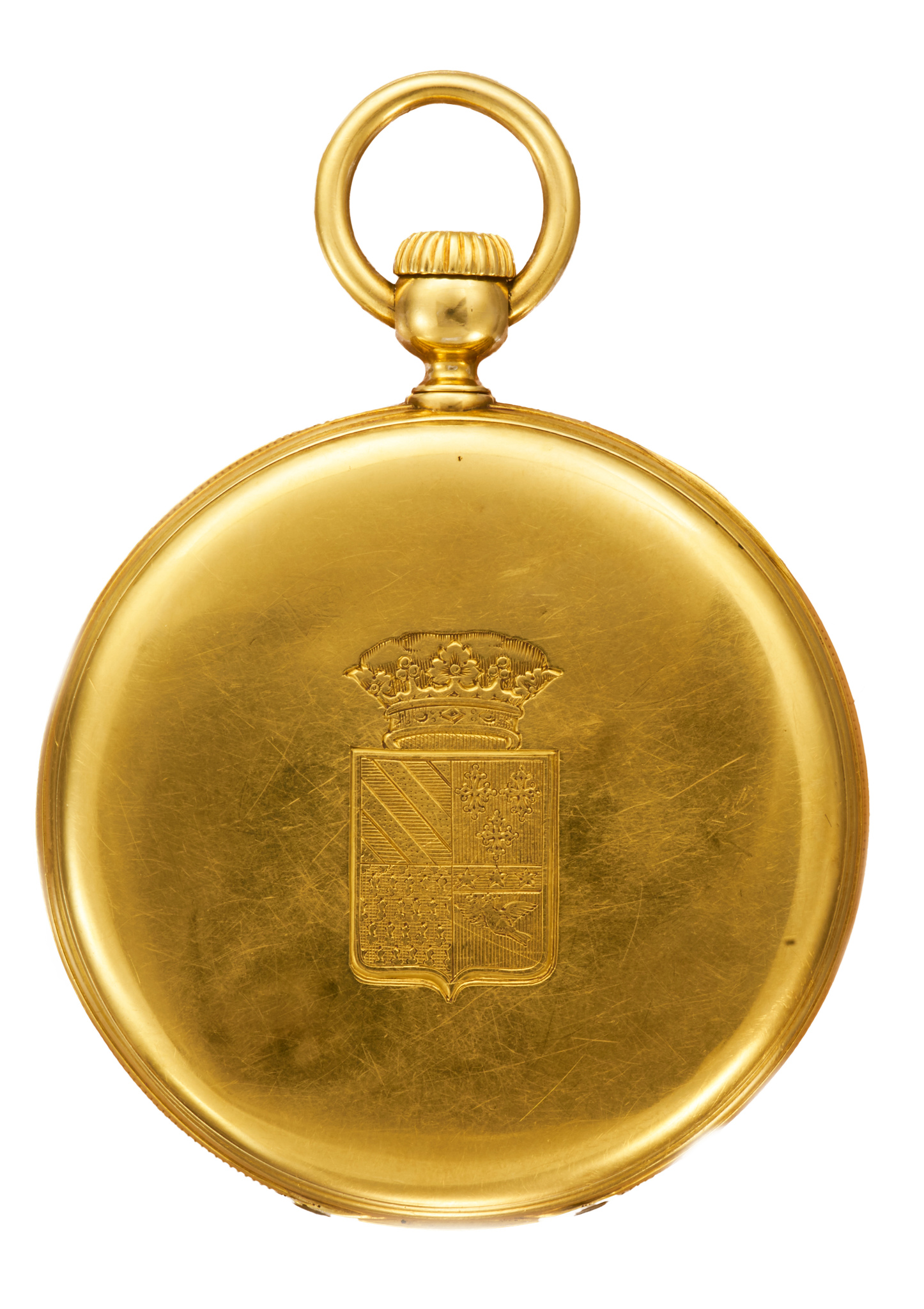 The Extract from the Archives, dated September 19, 2019, mentioned that this watch was sold on December 22, 1856, and engraved by the manufacture (cover and case-back).
--
Cuvette (dome) engraved with the mention “Invention et Exécution” (patented invention and realisation), a referral to the French Patent, No. 1 317, registered in Paris on April 22, 1845 by Jean-Adrien Philippe (1815-1894); this invention was described by his inventor as “un système ou disposition mécanique de remontoir et de mise à l’heure des montres par le pendant, disposition qui peut être appliquée à toute espèce de montres ordinaires, à répétition, de marine, et même aux montres à secondes indépendantes” (a system or mechanism for winding and setting watches by the pendant, which can be applied to all types of ordinary watches, with repeater, deck chronometers, and even for watches with independent seconds).
--

It’s difficult to say to which member of the de Castellane Family this armoured watch belonged. On these coat-of-arms we find different attributes from different families that take us back to a first person living in the 18th century:
Esprit-François-Henri de Castellane-Novejean (1730-1799), Marquess de Castellane, from the Adhémar de Grignan, Adhémar de La Garde and Aimars de Château Regnard families.

The watch being sold in 1856, it is most probably the property of Esprit-Victor-Elisabeth-Boniface de Castellane (1788-1862), even if the crown engraved on the watch is that of a Marquess while this character bears the title of Count.

Boniface de Castellane entered the French army on the day of the coronation of Napoléon I of France (December 2, 1804), as an enlisted soldier in the 5th Light Infantry Regiment. In February 1806, he was promoted to 2nd Lieutenant in the 7th Dragoons. The same month, he was transferred to the 24th Dragoons with whom he served in the Kingdom of Naples. In 1808, de Castellane followed General Georges Mouton into Spain as an Aide-de-camp. When Napoléon returned to Germany in 1809, de Castellane followed and he fought in that campaign at Abensberg, Eckmühl, Ratisbon, Aspern-Essling and Wagram.

Promoted to Captain in 1810, he further served Mouton, by now Count of Lobau, as Aide-de-camp and he accompanied him into Russia where he served at Vitebsk, Smolensk and Borodino. In October 1812, he was made Aide-de-camp of General Narbonne and was present at Krasnoi and the crossing of the Beresina. Promoted to Major, he served in the personal protection detail of the Emperor during the retreat. De Castellane was promoted to command of the 1st Regiment Garde d’Honneur in June 1813. During the German campaign he fought at Dresden.

In 1822, de Castellane was given command of a regiment of hussars of the Royal Guard. In 1823, he was serving in Spain but he was recalled in 1827 for his opposition to Ferdinand VII’s politics of revenge. In 1824, he was made Maréchal-de-camp (Major General). In 1829, he was made an Inspector-General of infantry. De Castellane was part of the French army sent to secure Belgium’s new found independence. In this campaign, he commanded the 1st Brigade of the 2nd Division. He served in the siege of Antwerp in 1832. In 1833, de Castellane was promoted Lieutenant-General and given command of the division of the Pyrénées-Orientales and in 1835 of the 21st Military Division. Appointed a Peer of France in 1837, de Castellane was sent to Algeria as Inspector-General. In 1838, he returned to his old post in the Pyrenées.

In February 1850, de Castellane was given command of the 42nd Military Division at Bordeaux. To this was added the 44th and 45th Divisions centered at Nantes and Rennes. Later that year, he was sent to the 6th Military Division at Lyon. In January 1852, he was named a Senator and Governor of Lyon. In December of that year, he was given the dignity of Marshal of France. De Castellane died in Lyon on September 16, 1862.