Case-back polished and polychrome enamelled with, on the cover, a representation of the rooster Chanteclerc in the guise of Constant Coquelin, and, on the case-back, the cypher “C C”. 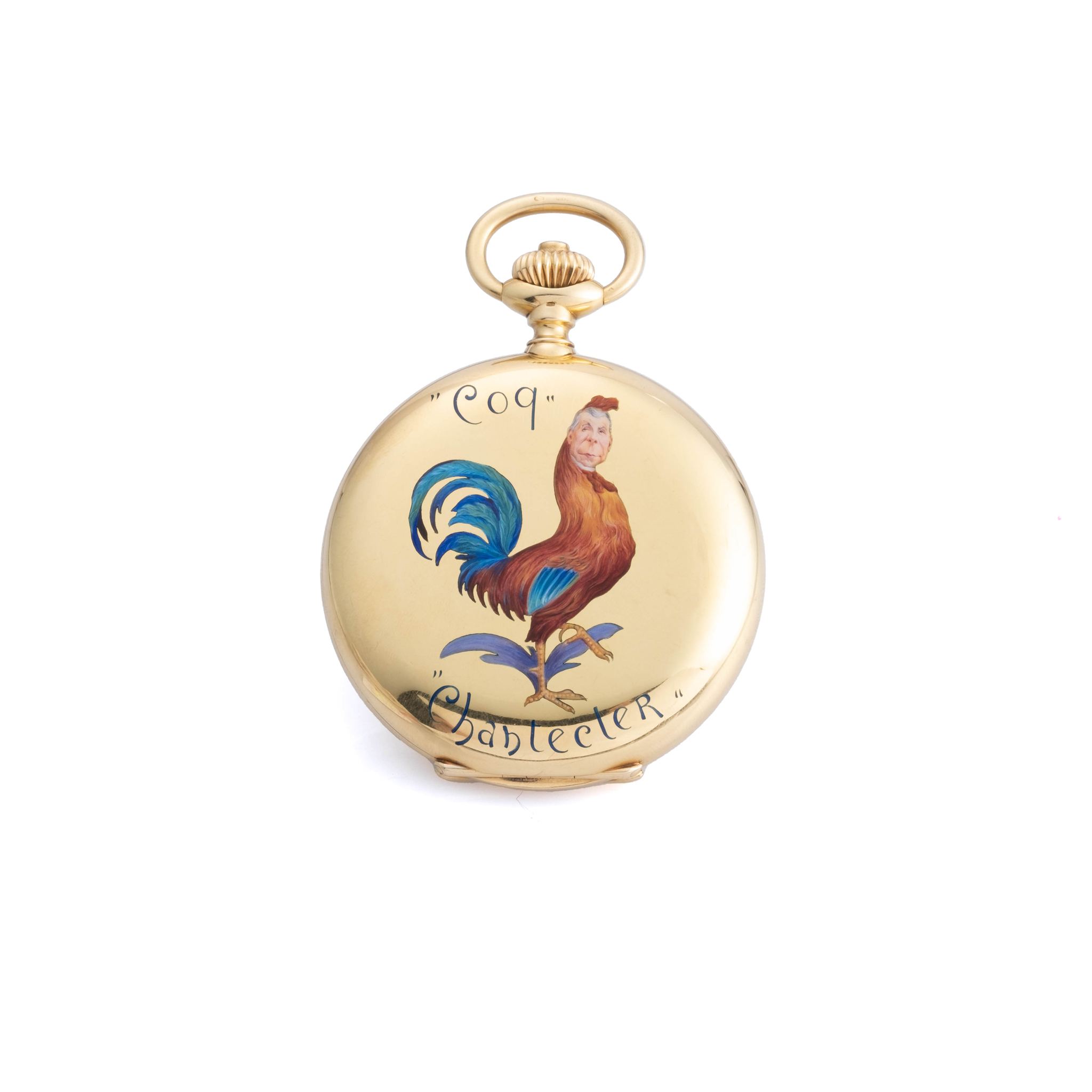 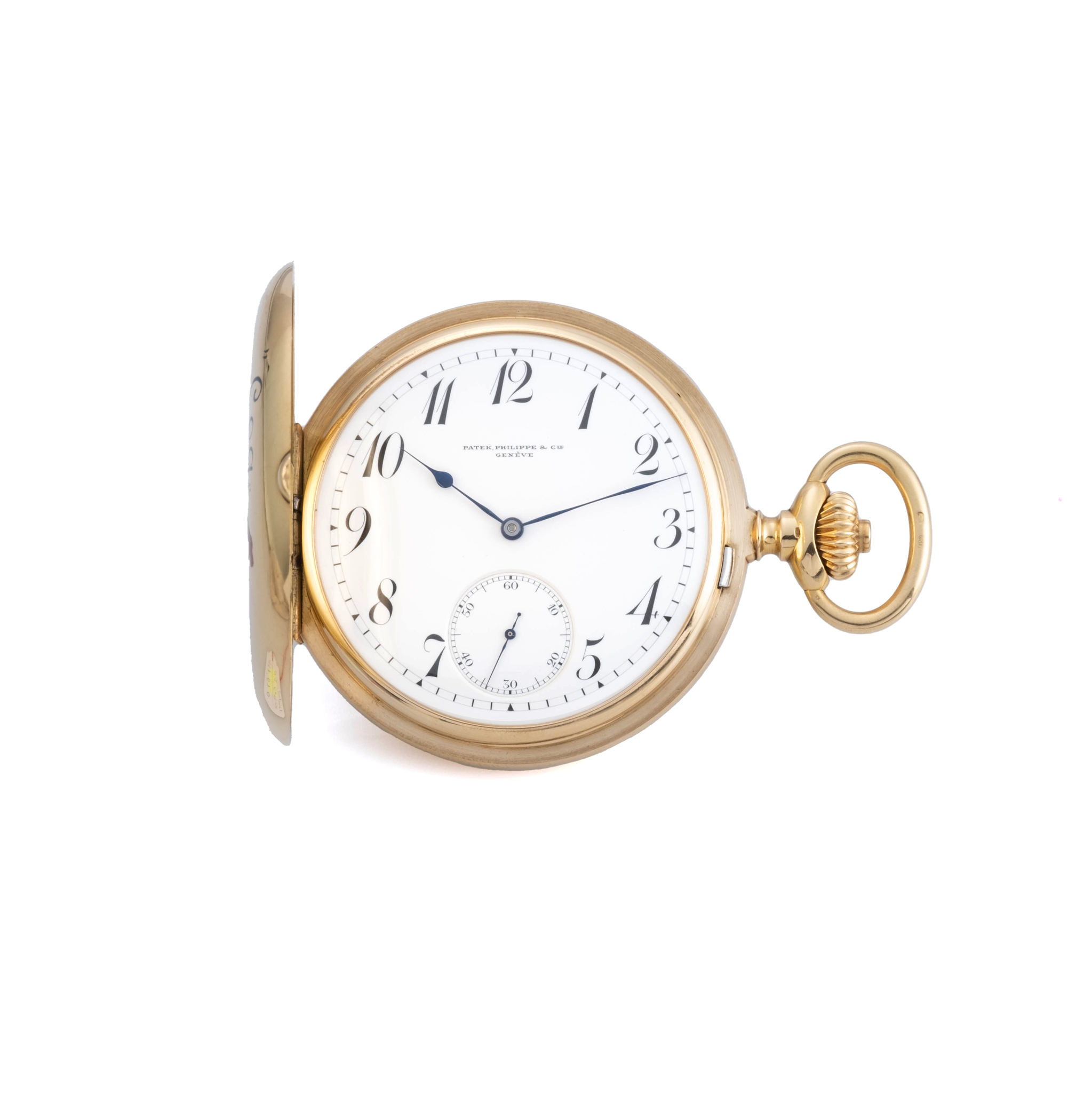 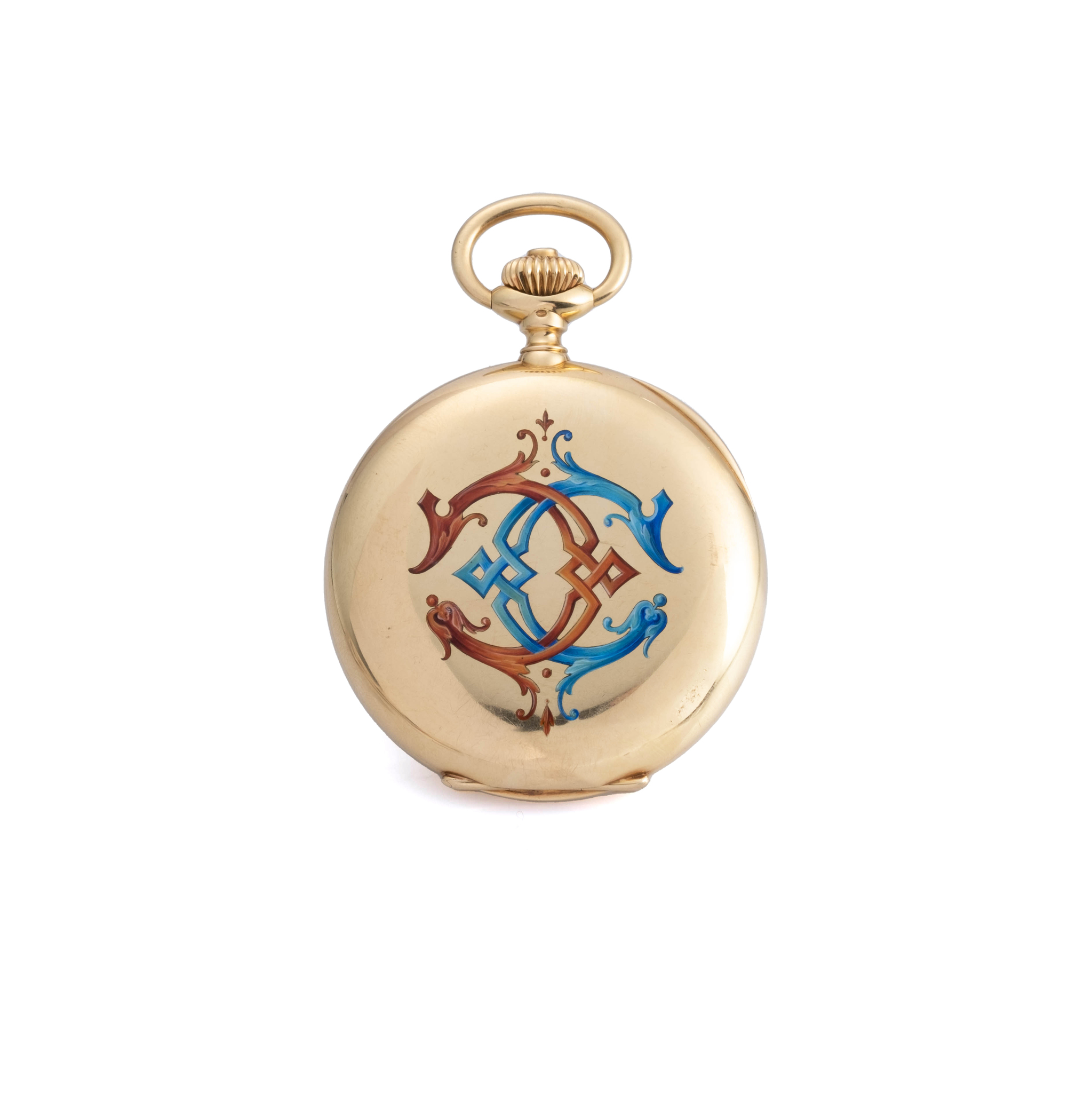 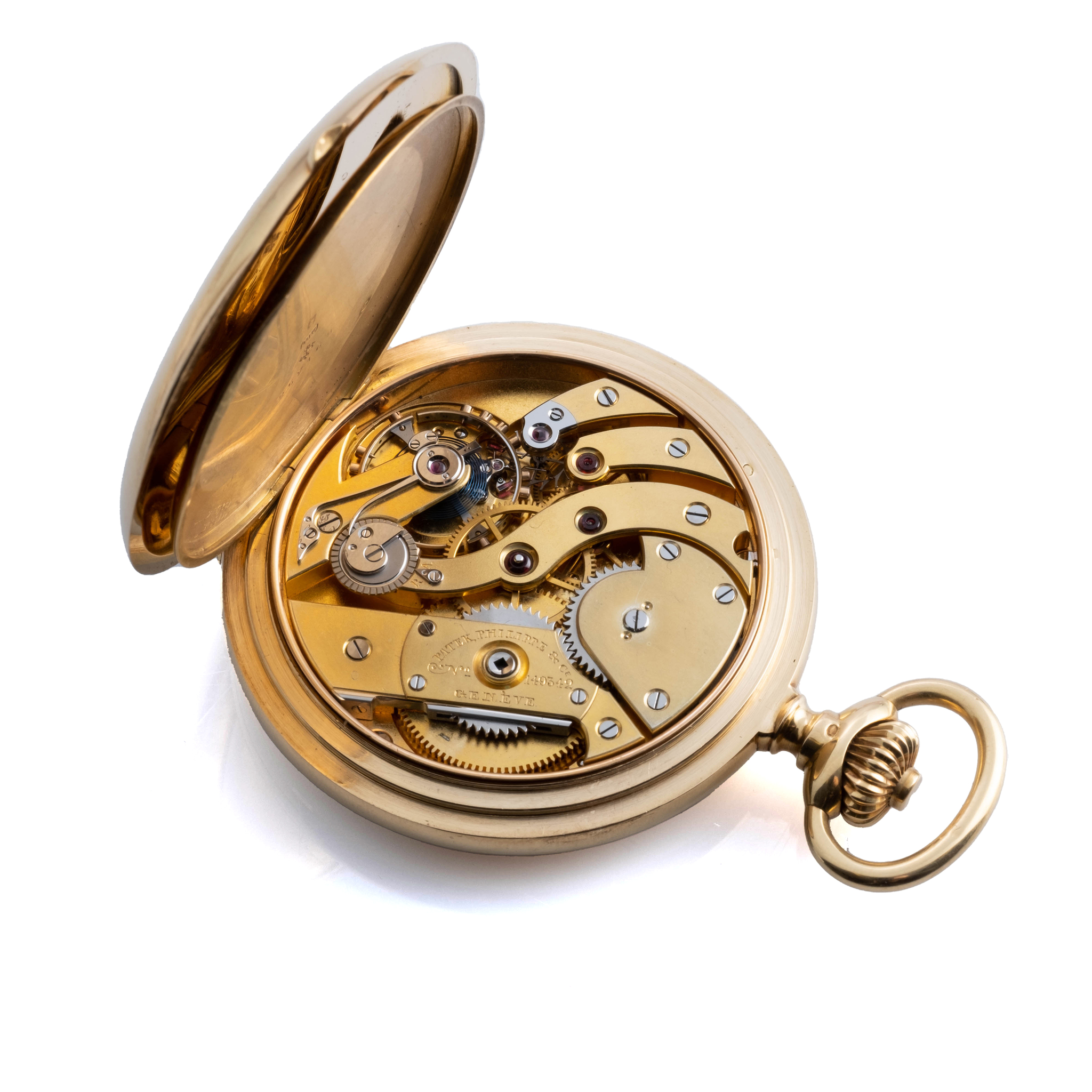 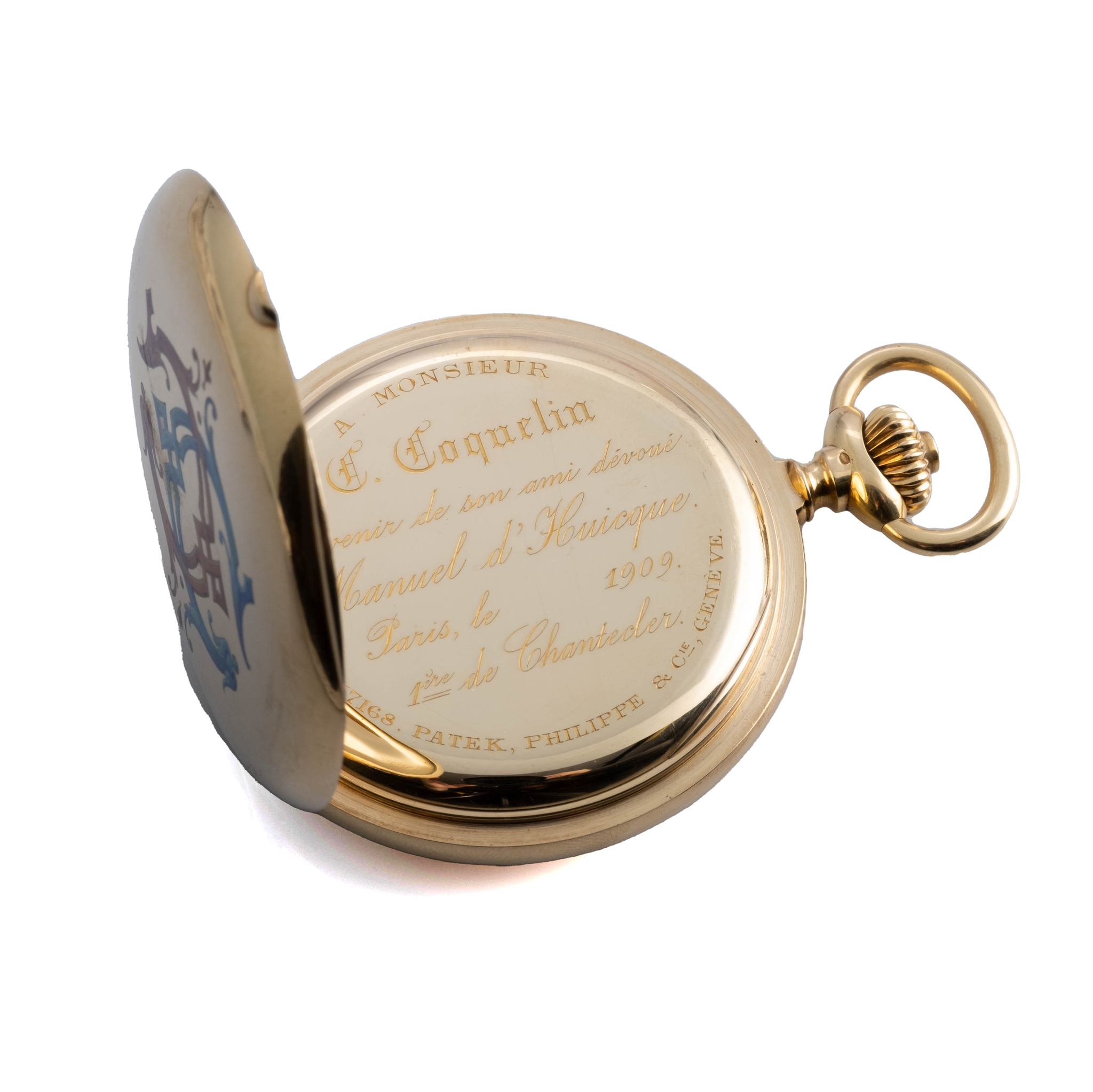 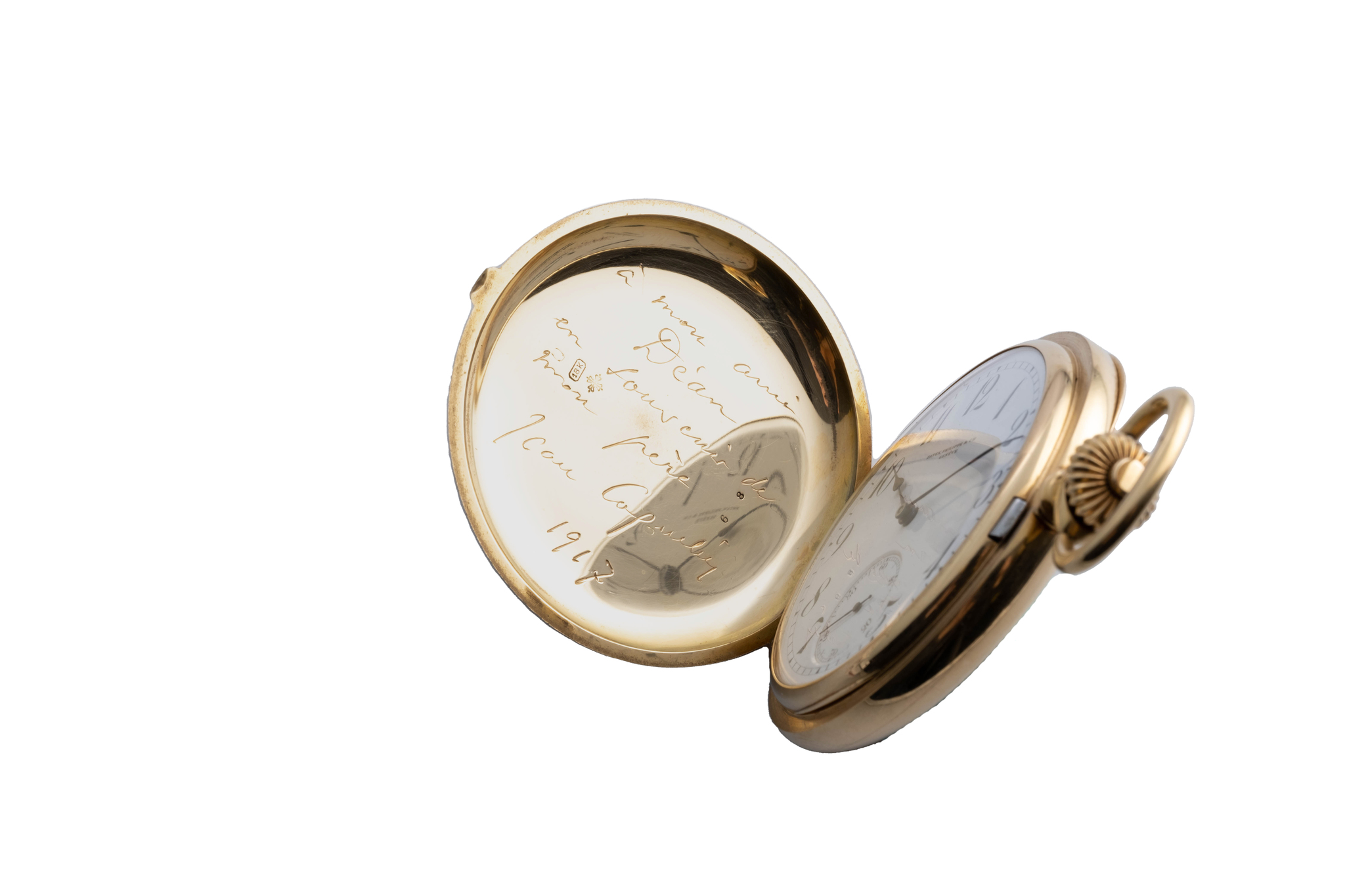 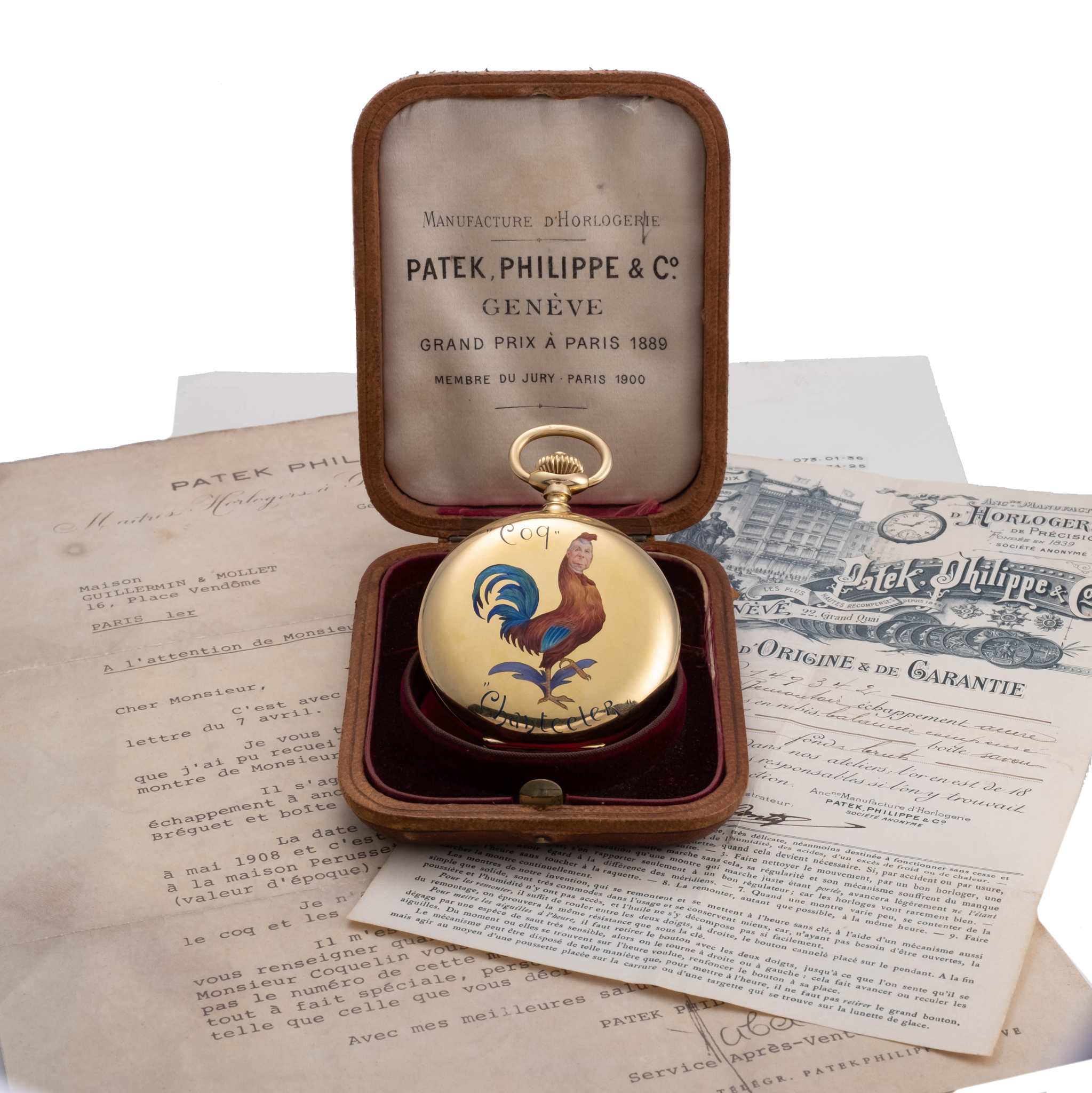 Movement also based on the Swiss invention patent No. 2 680, delivered on September 27 1890, to Patek, Philippe & Cie, Geneva, for a “Remontoir avec mise à l’heure perfectionné” (the definitive version of the keyless-winding and setting device), and, on the US design patent No. 20 483, delivered on January 13, 1891, to Adrien Philippe, Geneva, for a “Watch bridges for Watch-Movements”.

On the Certificat d’Origine et de Garantie (Certificate of Origin and Guarantee), it is specified that the backs are “raw”; this means that the watch was delivered by the Genevan manufacture with the cover and the case-back unpolished and without decoration. The enamel décors are therefore the work of a Parisian craftsman since the watch was delivered to Patek Philippe’s agent in Paris.

Let us also note another detail. On the cuvette (dome), the engraving indicates the case number, whereas usually the movement number appears. This suggests that the inscriptions engraved on this part of the case were not made by the Genevan manufacture but by a Parisian engraver.

Two letters accompany this watch and give us some information on its history. The first, dated April 11, 1972, addressed by the After-Sales Service of Patek Philippe S.A., Geneva, to Mr. Alain Mollet, Guillermin & Mollet, 16, place Vendôme, Paris, tells us that the watch was put into production in May 1908 and that it was delivered on February 25, 1909, to the Maison Perusset & Didisheim, for the amount of 790 Francs. This company was the retailer of the Genevan manufacture on the Parisian and probably French market. This house succeeded H. Rodanet and preceded Guillermin & Mollet, which was also the agent for Rolex, Geneva. The second letter, dated April 20, 1972, is addressed by Mr. Alain Mollet to Mr. Coquelin, 6, Villa Madrid, Neuilly-sur-Seine. This letter does not tell us anything else.

In a letter dated December 15, 2021, Mr. Thomas Sertillanges, President of the Edmond Rostand Festival, reveals the history of the watch. If it is possible thanks to the enamelled decorations and the inscriptions engraved on the watch, as well as the letters quoted above, to deduce a large part of it, the end of his letter throws light on the “third” life of the watch. Thus, we can tell you this story.

The watch was commissioned in 1908 by Manuel Alfonso d’Huicque Contesso (1871-1909), an Argentine impresario, to thank the French theatre actor Constant Coquelin (1841-1909), the creator of the role of Cyrano de Bergerac (1897). The play by Edmond Rostand (1868-1918) was a huge success worldwide, especially in South America during the performances organised by Manuel d’Huicque.

It appears that the watch was prepared as a gift for the actor at the premiere of Chanteclerc. He is shown in his stage costume as the Rooster. Edmond Rostand’s new play was scheduled for production in 1909. Unfortunately, Constant Coquelin was struck down by a heart attack on January 27, 1909. The favourite actor of the author of Cyrano de Bergerac (1897) and L’Aiglon (1900) never received the gift. The watch was probably given to Jean Coquelin (1865-1944), the son of Constant Coquelin, who played the role of the dog Patou in the play. The play was not premiered until February 7, 1910, at the Théâtre de la Porte-Saint-Martin, where Jean Coquelin was co-director with Henry Hertz (1875-1966). It was another sacred monster of the French theatre who finally played the role of the cock Chanteclerc, Lucien Guitry (1860-1925), the father of the playwright and actor Sacha Guitry (1885-1957).

A rooster, Chantecler, reigns over a barnyard and is so convinced of his importance that he imagines that his crowing will make the sun rise. But the arrival of a pheasant hen turns his life upside down, revealing love to him in such a way that he forgets to sing. However, when the daylight appears, Chantecler becomes the laughing stock of all domestic and wild animals, especially the owls, creatures of the night who hate him and force him to accept a public fight with another rooster. The fight takes place in the guineafowl’s literary salon. After a near-death experience, Chantecler defends the barnyard against the threats of a sparrow hawk and thus recovers some of his prestige. Unjustly neglected, but understanding that in the rooster vanity is stronger than love, the pheasant nevertheless sacrifices herself for him and goes in his place to meet a hunter. A shot goes off, but it is the golden-voiced nightingale who is mortally wounded. The rooster’s hoarse crow will continue to celebrate the dawn.

The work has a considerable number of actors, more than 70 characters, and 195 costumes that required 35 000 hours of work. After the success of Cyrano, its release was awaited with a fervour fuelled by repeated delays. Spectators came from all over the world to attend the premiere, and the price of official seats was doubled.

Edmond Rostand wrote Chantecler after two successes, Cyrano de Bergerac and L’Aiglon. He began writing it at the age of 34. The demands are as great as the size of the project. The pressure was enormous for the young author. Rostand wrote with ease, he designed the costumes and the models of the sets himself, but the completion of such a colossal play was difficult for him. He suffered from a combination of health problems and anxiety attacks. The obligation to finish the monster Chantecler became burdensome, and Rostand took eight years to complete his work. The technical prowess of this play has subsequently done it a disservice. It has rarely been revived, the means used by Rostand having been extraordinary.