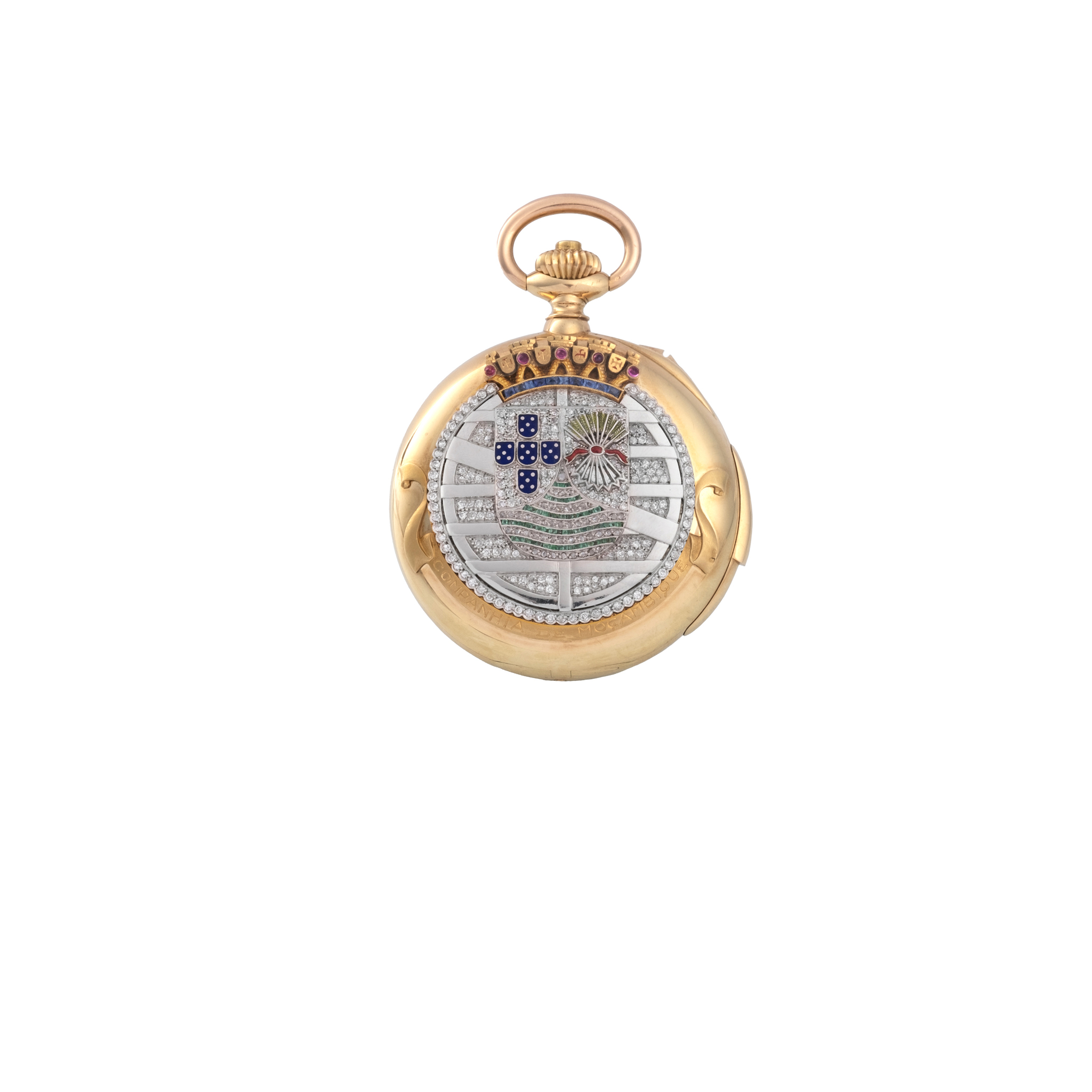 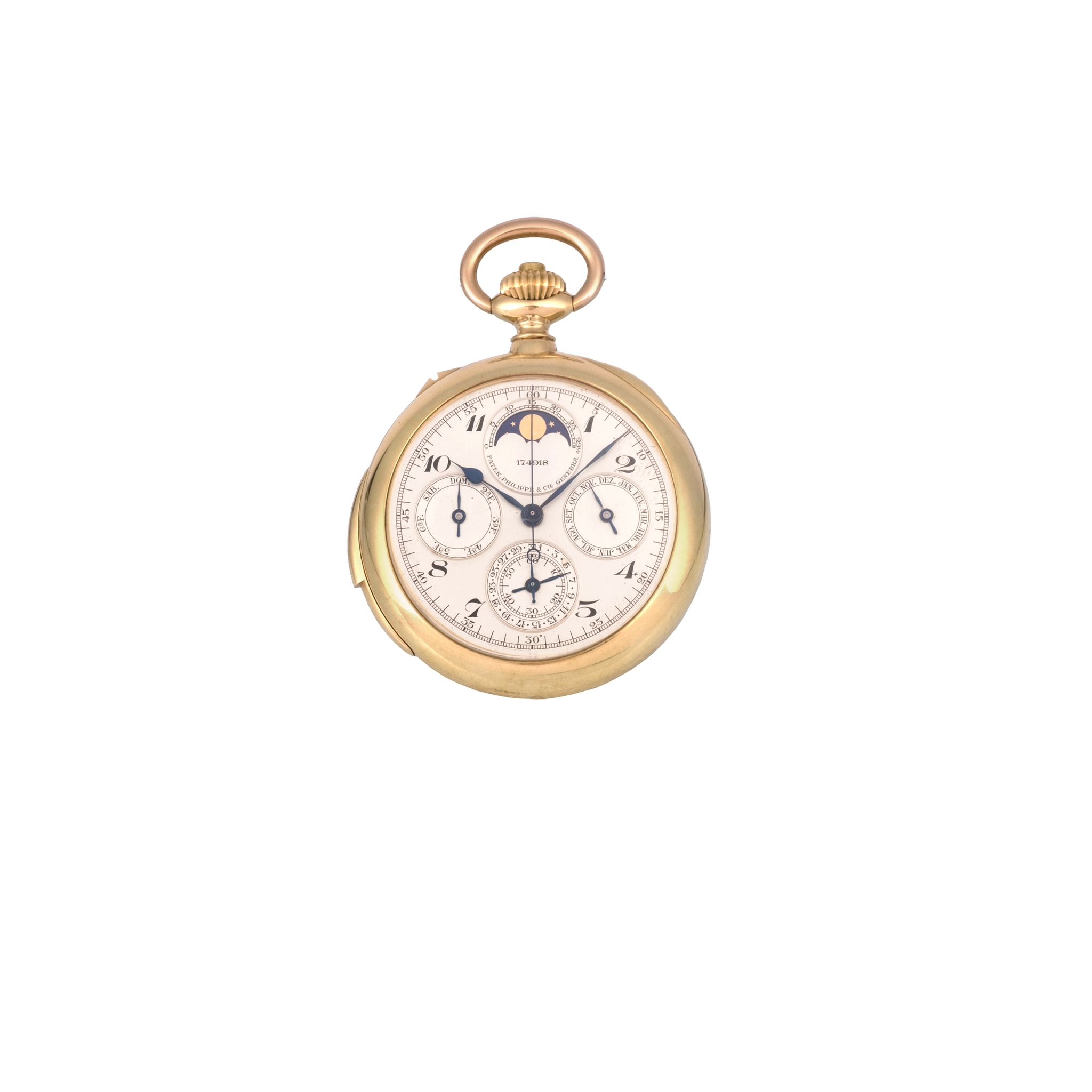 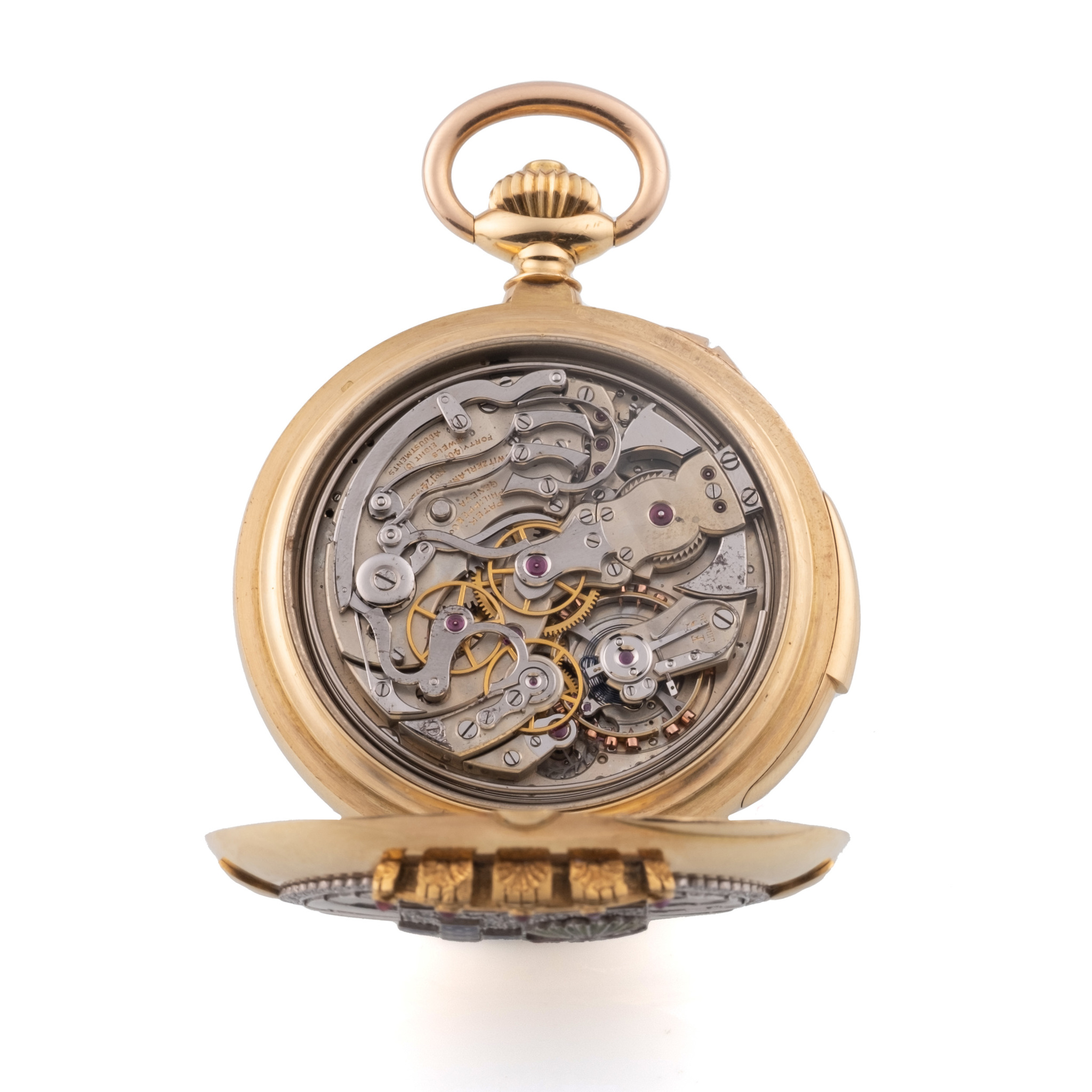 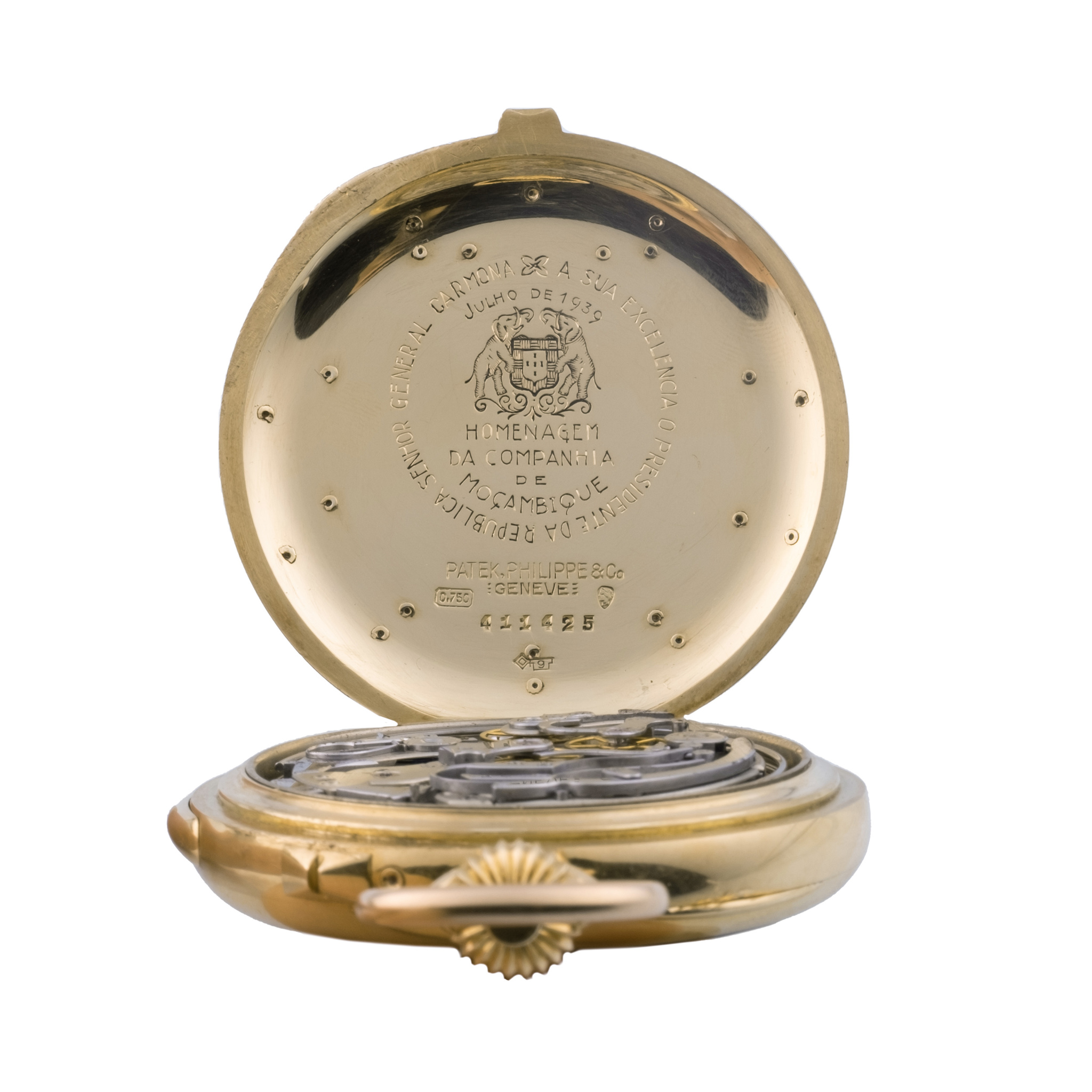 The Extract from the Archives, dated August 23, 2011, mentioned that this watch was made in 1919, encased in 1939, and sold on April 6, 1939.
--
Presentation Watch
A presentation watch is a watch offered by, or on its behalf, by a ruler / leader (Emperor, King, President, Prime Minister, Company Director, etc.) as an acknowledgment or thanks to a third person.
--
In July 1939, the President of Portugal, António Óscar de Fragoso Carmona (1869-1951), awarded the Mozambique Company the Grand Cross of the Order of the Colonial Empire; the first time such an award had been made to a company. This watch was most probably given to him on this occasion by the company’s Directors.
The coat-of-arms applied to the case-back of the watch was made by a Portuguese goldsmith in Lisbon, as evidenced by the master and control marks stamped in two places on the décor.

The Mozambique Company
The Mozambique Company (Portuguese: Companhia de Moçambique) was a royal company operating in Portuguese Mozambique that had the concession of the lands in the Portuguese colony corresponding to the present provinces of Manica and Sofala in central Mozambique.
The company was established the February 11, 1891, with a capital stock of about five million dollars obtained from financiers from Germany, the United Kingdom and South Africa. Isaacman & Isaacman report that the firm was capitalised at 40 000 pounds, and that British and French capital quickly predominated.
The concession was granted for a period of 50 years, during which the company could not only exploit the resources and existing manpower (partly through the chibalo system of forced labour) but also grant subconcessions. The company was granted the exclusive right to collect taxes, but was itself granted a 25-year tax exemption. In return the Portuguese state would receive 7.5 % of the company's profits and 10 % of the sold shares. The company was also required to settle 1 000 Portuguese families and provide education and public administration in its territory.
In practice, the company made only partial use of the prerogatives with which it had been bestowed; but this was balanced by the fact that it also met very few of its obligations. Having only limited capital, the company did little to develop the area, deriving most of its income from its ability to tax and its power to use conscripted labour on its plantations and for lease to adjacent estates. Resistance to the forced labour regime was a major cause of rebellions against the company which occurred in 1902 and 1917. Despite the company’s obligation under its charter to provide forces to maintain law and order, it was unable to meet these crises, and on both occasions, Portugal had to mount expensive interventions.
The Mozambique Company had its headquarters in Beira (Sofala Province), where it controlled the public administration and the post offices. The company also founded a private bank, the Banco da Beira, which issued currency in pounds.
Because of its bad performance and because of the shift, under the Salazar regime, towards Portuguese control and away from international control of the economy, the company’s concession was not renewed when it ran out in 1942. The Governor of Manica and Sofala commented: “They did nothing to develop the potential wealth of this entire region, preferring to plunder it and alienate the natives.”
On July 18, 1942, the territory of Manica and Sofala passed to the Portuguese colonial authorities and the Mozambique Company continued to operate in the agricultural and commercial sectors.
On October 20, 1961, The Mozambique Company became the Grupo Entreposto Comercial de Moçambique, which transformed itself into a holding on September 6, 1972, with the participation of capital from other companies, including Entreposto-Gestão e Participações (SGPS) SA.
In 1939 the President of Portugal, António Óscar de Fragoso Carmona (1869-1951), awarded the Grand Cross of the Order of the Colonial Empire to the company, the first time it had been awarded to a company.
Bibliography
· Isaacman Allen, & Isaacman, Barbara, Mozambique: From Colonialism to Revolution, 1900-1982, Editions Westview, Boulder, Colorado (U.S.A.), 1983.

Carmona, António Óscar de Fragoso
Lisbon, November 24, 1869 – Lisbon, April 18, 1951
After graduating from the Portuguese Military School at the age of nineteen, António Óscar de Fragoso Carmona climbed the ranks of the military career and became a General in 1922. In 1926, he was Governor of Évora.
Since the proclamation of the Republic in 1910, Portugal had been going through a serious political and economic crisis, marked by the crumbling of the parties, endemic ministerial instability (seven ministries in 1920 alone), bloody strikes and riots, the October Revolution of 1921, military “pronunciamiento” (three in 1925) and the collapse of the currency and the economy. Following the example of General Primo de Rivera, who had established a dictatorial regime in Spain in 1923, the Portuguese military, led by General de Oliveira Gomes da Costa, succeeded in a coup d’état in Braga on May 28, 1926, to re-establish order and found the “New State”. Power was in the hands of a triumvirate composed of José Mendes Cabeçadas, head of the provisional government, General da Costa, Minister of War, and General Carmona, Minister of Foreign Affairs. At the beginning of July, after having eliminated the first of his colleagues and deported the second to the Azores, General Carmona appointed himself Prime Minister and interim President. Supported by the monarchists, he suppressed the bloody military rebellions in Porto and Lisbon in February 1927, the last of a long and troubled period.
In March 1928, he was elected President of the Republic. The following month, in order to restore the finances, he called on Antonio de Oliveira Salazar, professor of political economy at the University of Coïmbra, who immediately carried out a spectacular financial recovery thanks to draconian measures, became Prime Minister in 1932 and in fact ruled Portugal for more than forty years. Until the death of the President of the Republic, Salazar was supported by the moral authority of Carmona, re-elected in 1935, 1942 and 1949.