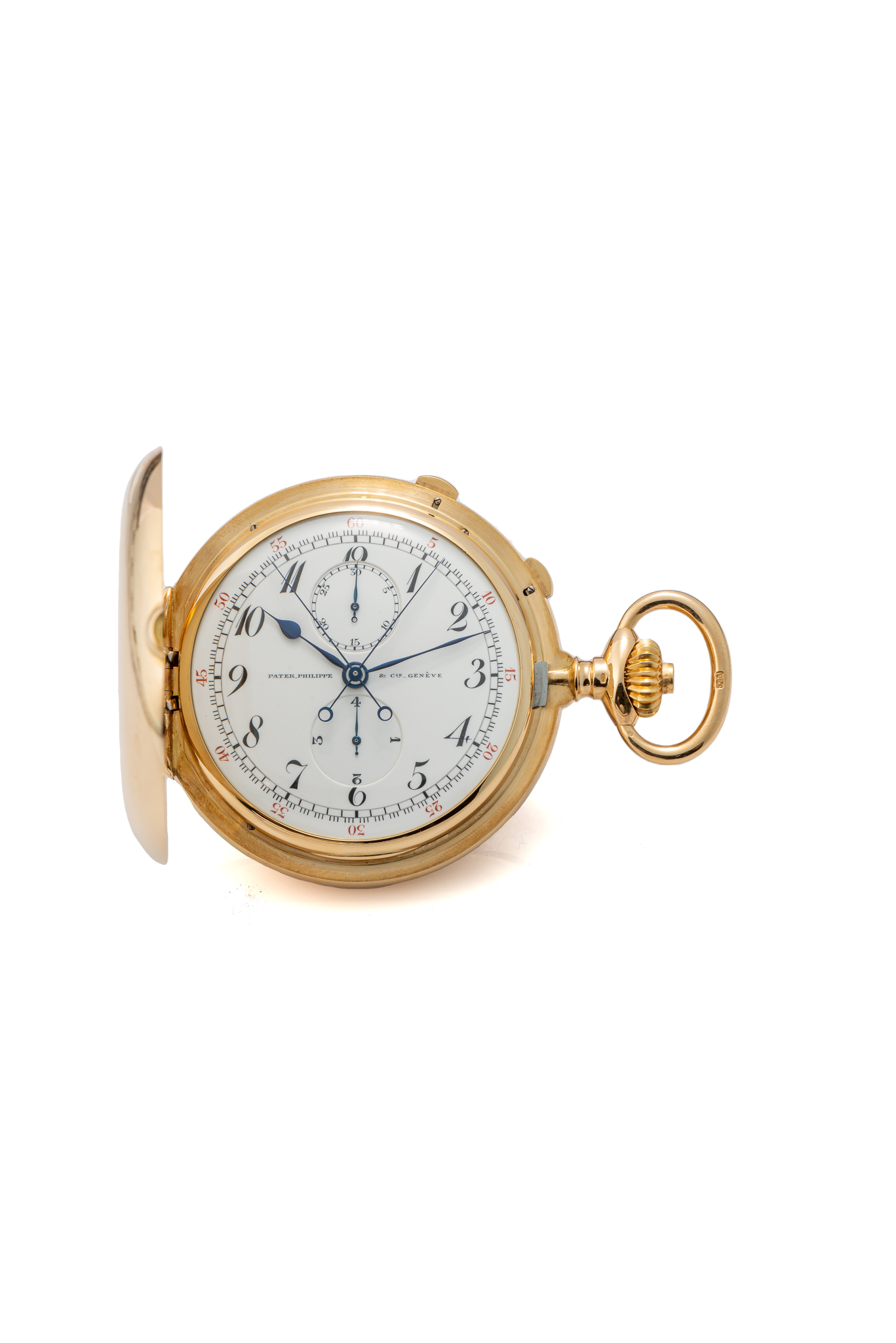 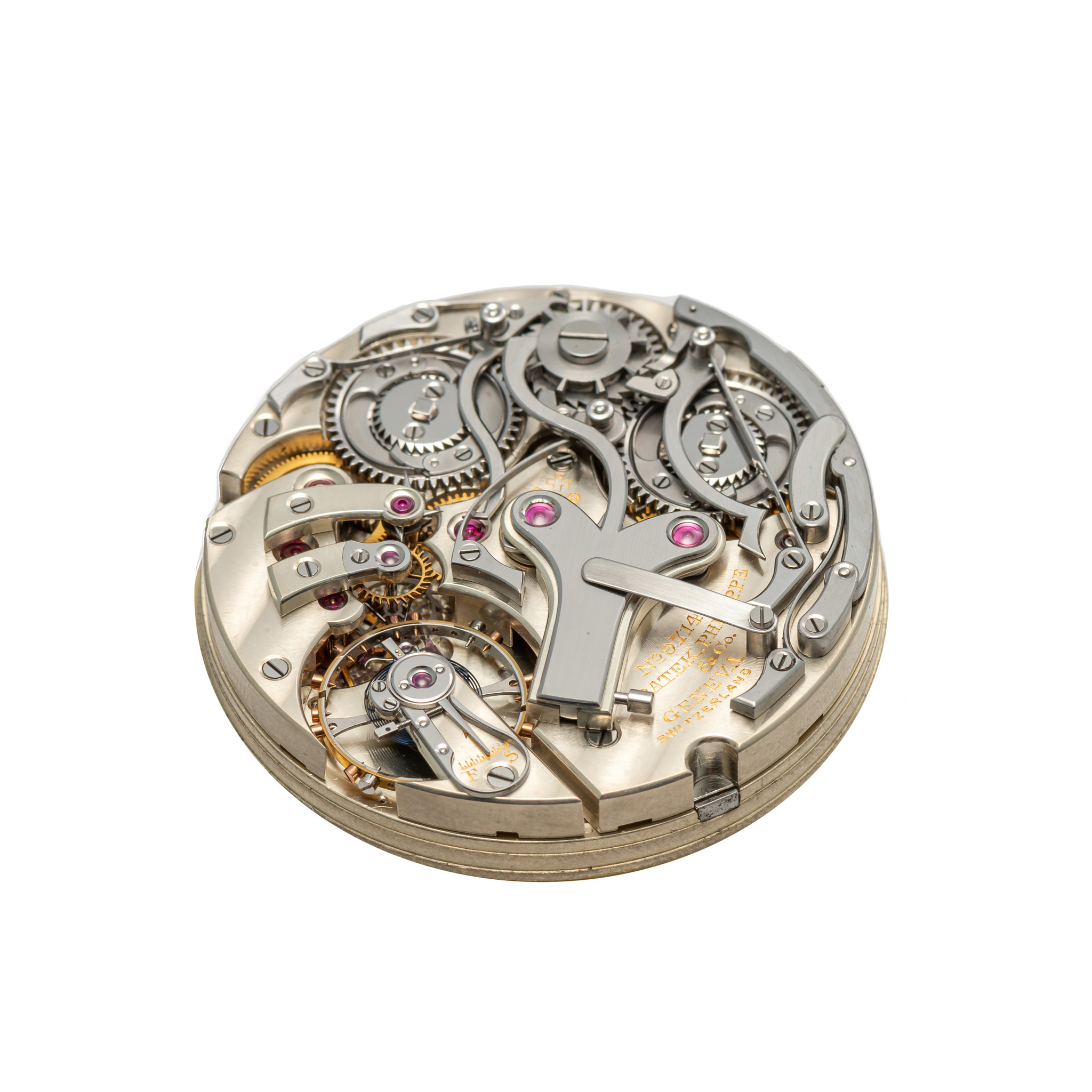 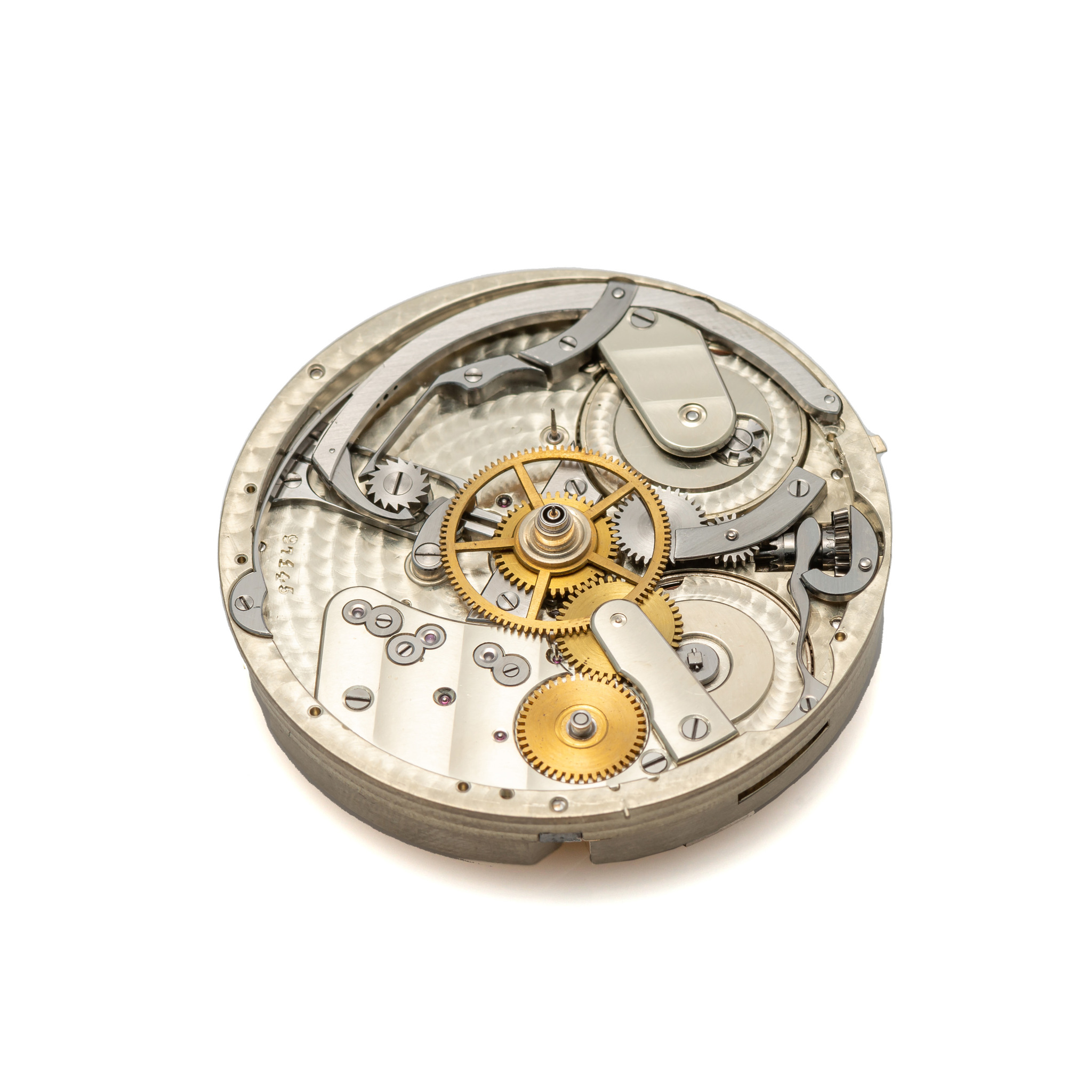 Model made according to the invention of William-Alfred Piguet, Le Sentier (Vallée de Joux)

Movement based on the Swiss invention patent No. 5 310, delivered on May 27, 1892, to William-Alfred Piguet, Le Sentier (Vallée de Joux), for a “Chronographe sans engrenage pour montre quart ou cinquième de seconde dite foudroyante” (Chronograph without gearing for a quarter or fifth of a second watch, known as foudroyante or jumping seconds).
--
The movement of this watch is built on an ebauche (blank movement) that can be used for a dead independent seconds mechanism with bidirectional winding. It has an “in view” (visible) chronograph mechanism and a hidden one for a split-seconds (on the main-plate, dial side). While this would become common practice in the years to come (circa 1890-1900), at the time it was not at all usual for this type of ebauche.
The jumping seconds mechanism is incorporated between the main-plate and the bridges but is driven by the chronograph (with “start” / “stop” / “return to zero” functions). The jumping seconds, here beating a quarter of a second (known as foudroyante seconds), is obtained in the classic way, as in watches with dead independent seconds. But thanks to a second four-pointed star-wheel and a heart-shaped cam mounted on the axis of the hand, there is also the possibility of a return to zero, a function which does not exist in watches with dead independent seconds.
This type of watch was used to time sporting events. The jumping seconds indicated either ¼ or 1/5 second; that was the standard of precision for sporting events at the time.
Only two other Patek Philippe watches of this type are known to exist. They are both based on William-Alfred Piguet 19’’’ ebauches, open-face type, with pink gold cases. They are kept in the Patek Philippe Museum in Geneva:
Delivered on July 30, 1892, to H. Pleister, 312 Regent Street, London (Great Britain), for the amount of 1 700 francs.
Provenance
Antiquorum, Geneva, auction, April 24-25, 1999, lot 598, sold for the amount of CHF 63 480.-
Localisation
Patek Philippe Museum, Geneva, Inv. S-1 126.
Sold on September 8, 1896, to Son Altesse Royale le Prince de Siam (His Royal Highness the Prince of Siam), one of the son of Chulalongkorn (1853-1910), King of Siam under the name of Rāma V (1868-1910), maybe Vachiravudh (1881-1935), future King of Siam under the name of Rāma VI (1910-1925), for the amount of 2 000 francs; the cuvette (dome) engraved with a Thai inscription.
Provenance
Antiquorum, Geneva, auction, November 11, 1987, lot 74, sold for the amount of CHF 40 250.-
Localisation
Patek Philippe Museum, Geneva, Inv. S-658.
Another Patek Philippe watch exists with the same functions, this one based on a Victorin Piguet & fils 19’’’ ebauche (with dragging 60-minute counter), hunting-case type, with a yellow gold case. It is also preserved in the Patek Philippe Museum in Geneva:
Delivered on July 10, 1889, to C. Fredenhagen, Agent Général, Buenos Aires (Argentina), for the amount of 1 475 francs.
Provenance
Antiquorum, Geneva, auction, November 14, 1999, The Art of Patek Philippe, Legendary Watches, lot 411, sold for the amount of CHF 78 200.-
Localisation
Patek Philippe Museum, Geneva, Inv. S-1 133.
The watch we present here is therefore of the utmost rarity and is also in a remarkable state of preservation.
The study of this watch and the three above-mentioned shows us the evolution, between 1888 and 1892, of the mechanism leading to the deposit of the patent of William-Alfred Piguet (1859-1917) at the end of May 1892.
This watch is also a beautiful testimony showing the close relations that the Genevan manufacture maintained with the blanks makers of the Vallée de Joux, including also:
All these gentlemen were closely related by family ties.
Note that the bidirectional winding mechanism with two barrels used in this watch is probably inspired by that of Louis-Elisée Piguet (a cousin of William-Alfred Piguet); a mechanism which will be patented only in 1895:
Piguet, William-Alfred
Chez-le-Maître, Le Chenit, Vallée de Joux, February 5, 1859 - Vevey, September 20, 1917
William-Alfred Piguet (1859-1917) was the son of Henri-Daniel Piguet (1817-1892) and Louis-Françoise Le Coultre (1822-1890). He was the younger brother of Emile-Victorin Piguet (1850-1937) and Henri-Julien Piguet (1852-1936). Victorin-Emile Piguet was the father of Jean-Victorin Piguet (1874-1949) and Paul Piguet (born 1885). Jean-Victorin Piguet was the father of Henri-Daniel Piguet (1904-1997). All were outstanding watchmakers who worked in the Vallée de Joux or Geneva and specialised in the design and production of ebauches (blanks movements) for watches with horological complications. For the most part, they are suppliers to Patek Philippe.
At the beginning, William-Alfred Piguet worked in the company Victorin Piguet Frères, founded in Geneva in 1880 by his elder brother. At the same time, Victorin Piguet ran a workshop-school in Geneva for teaching watches with horological complications. In 1883 he returned to the Vallée de Joux, to Le Solliat-sur-Le Sentier; his brother probably followed him.
In September 1885, William-Alfred Piguet married Elise-Adèle Reymond (1862-1941); the couple had six children (two of whom died in infancy).
In the late 1880s [1888?], William-Alfred Piguet founded his own company: Piguet, Guillaume & Cie, Sentier et Genève.
In 1892-1893, he participated in the World’s Columbian Exposition in Chicago where he made a small but very interesting display of 5 of their superb, complicated watches of the highest grade.
In 1896, at the Swiss National Exhibition held in Geneva, William-Alfred Piguet was one of the ten members of the Jury for the horological section. He exhibited a few choice pieces under his own name, hors concours (as a member of the Jury, his company could not compete).
In addition to his watches, William-Alfred Piguet was awarded two patents in Switzerland in 1891 and 1892; these concerned the chronograph.
Swiss invention patents
Once the split-seconds mechanism has been stopped, this device allows it to be put out of contact with the rest of the chronograph; as a result, the setting of the watch is improved when the chronograph is running without its split-seconds mechanism, because the main gear train involves less weight of components.