A very fin and rare and historical,18K yellow gold, open-face, keyless-winding, round-shaped, pocket watch, with subsidiary seconds at 6 and five horological complications:
- Half-instantaneous perpetual calendar
- Date of the month (subsidiary dial at 6 o’clock)
- Day of the week (subsidiary dial at 3 o’clock; indications given in Spanish)
- Month of the year (subsidiary dial at 9 o’clock; indications given in Spanish)
- Phases of the moon (aperture at 12 o’clock)
Case-back glazed; the gilded brass cuvette (dome) was pierced with five holes intended to fix a cypher (lacking). White enamel dial with radial Roman numerals; blued steel “Spade” hands. 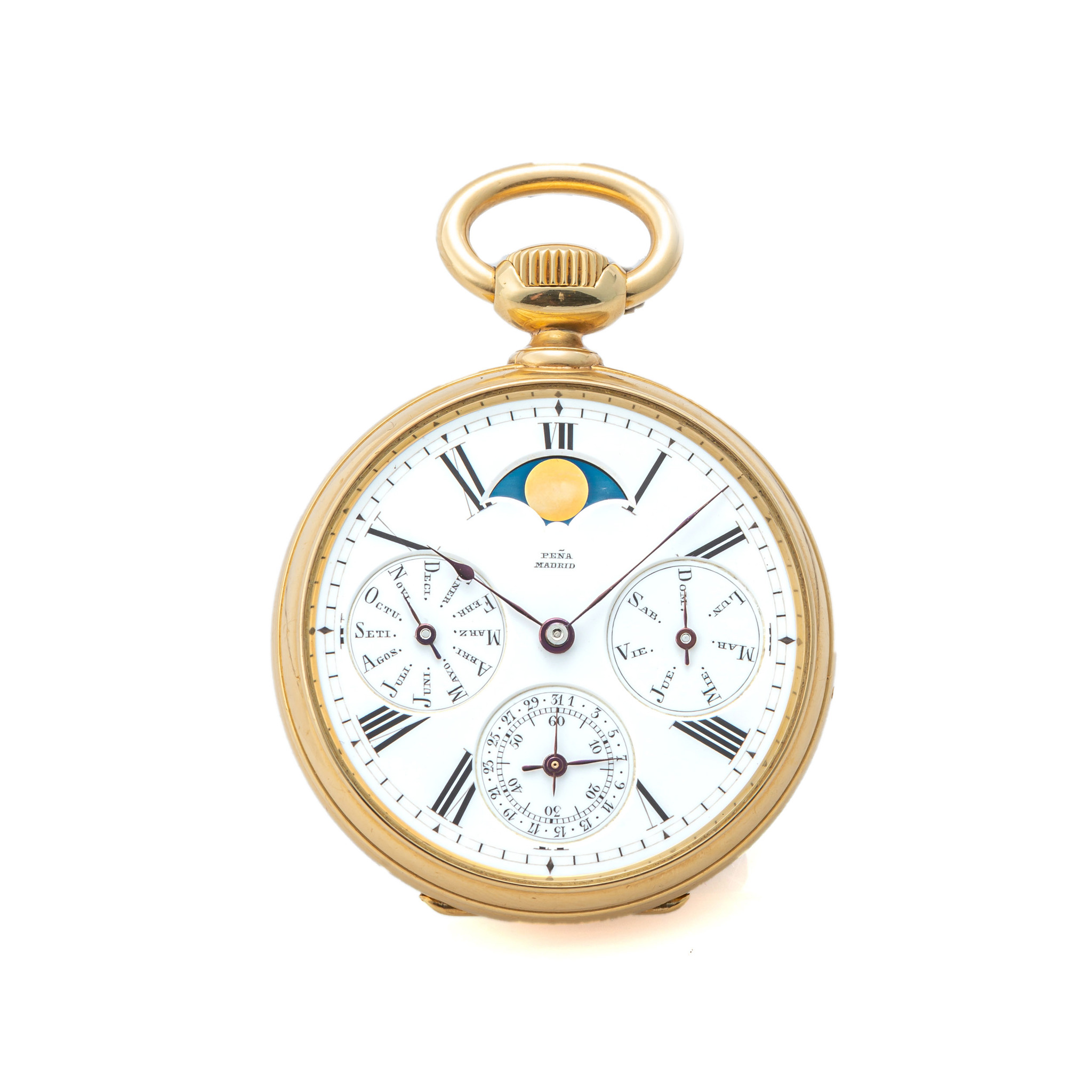 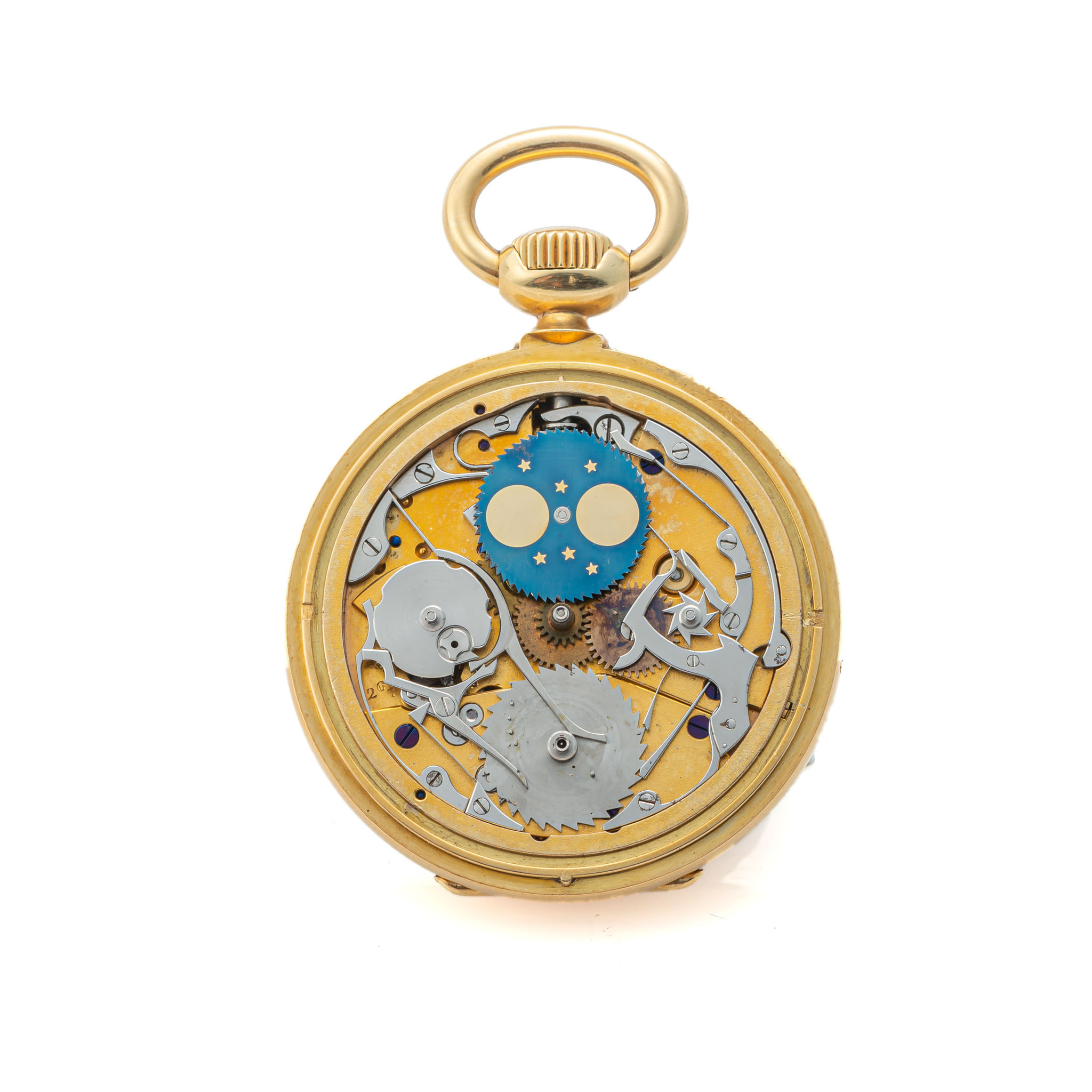 Signature dial (by the retailer)

Accessories copy of the extract from the archives

Perpetual leap year calendar
The movement of this watch is probably based on an ébauche (blank) from the workshops of Louis Audemars, one of the usual suppliers of the
Genevan manufacture.
The Louis Audemars house was founded in 1811 by Louis-Benjamin Audemars (1782-1833), in the hamlet of Crêt-Meylan, near Le Brassus, in the
Vallée de Joux (Canton of Vaud).
This type of perpetual calendar with display of leap years, whether with the indication of the exact duration of each month for the 48 months of the
cycle including February 29th every four years, is designed and developed since 1860 by Charles-Henri Audemars (1829-1906), the youngest son
of the founder of the horological manufacture.
Then it replaces the pocket watches with retrograde perpetual calendar (more difficult to use and more expensive in manufacturing cost) – of
which Eugène-Constant Lecoultre (1819-1882), originally from Le Chenit (Vallée de Joux), has made a speciality in Geneva – and gradually
imposes itself throughout the watch industry.
Even if this invention is much earlier, the new perpetual calendar mechanism is extensively described and illustrated in July 1885 in the Journal
Suisse d’Horlogerie (Swiss Journal of Watchmaking, founded in Geneva in 1876), allowing all watchmakers to build such a watch.
This system which is known as traînant (dragging) is then improved with the invention in 1889 of the instantaneous and simultaneous jump of the
date-discs by the Genevan manufacture Patek, Philippe & Cie (Swiss patent invention No. 1 018, of May 23, 1889).
As with other of his inventions (winding and time-setting to the pendant, independent deadbeat seconds, bi-directional winding, etc.), Adrien
Philippe (1815-1894) published his creations very late; they were the subject of a very long gestation period and of numerous improvements due
to experience.
It is therefore understandable to see on this watch that the calendar mechanism is a half-instantaneous jump; on the other hand, it is difficult to say
whether this improvement is due to the workshops of Louis Audemars or those of Patek Philippe.
Very quickly these two manufactures built their perpetual calendars on additional plates (easier to disassemble and reassemble for the
watchmaker’s adjustments), allowing them to be incorporated on watches with repeater on demand or other horological complications.
Louis Audemars house remains in the history of watchmaking as one of the greatest manufactures of all time, having realised, under its name or
that of other watchmakers, some of the most beautiful watches in the world of the years 1860-1880.
The orders for ébauches(blank movements) received by this workshop enabled many of the great houses (notably Breguet and Patek Philippe) to
create masterpieces that marked the history of watchmaking in the second half of the 19th century and the beginning of the 20th century. This did
not prevent the master watchmakers of these manufactures from improving and creating other marvels.