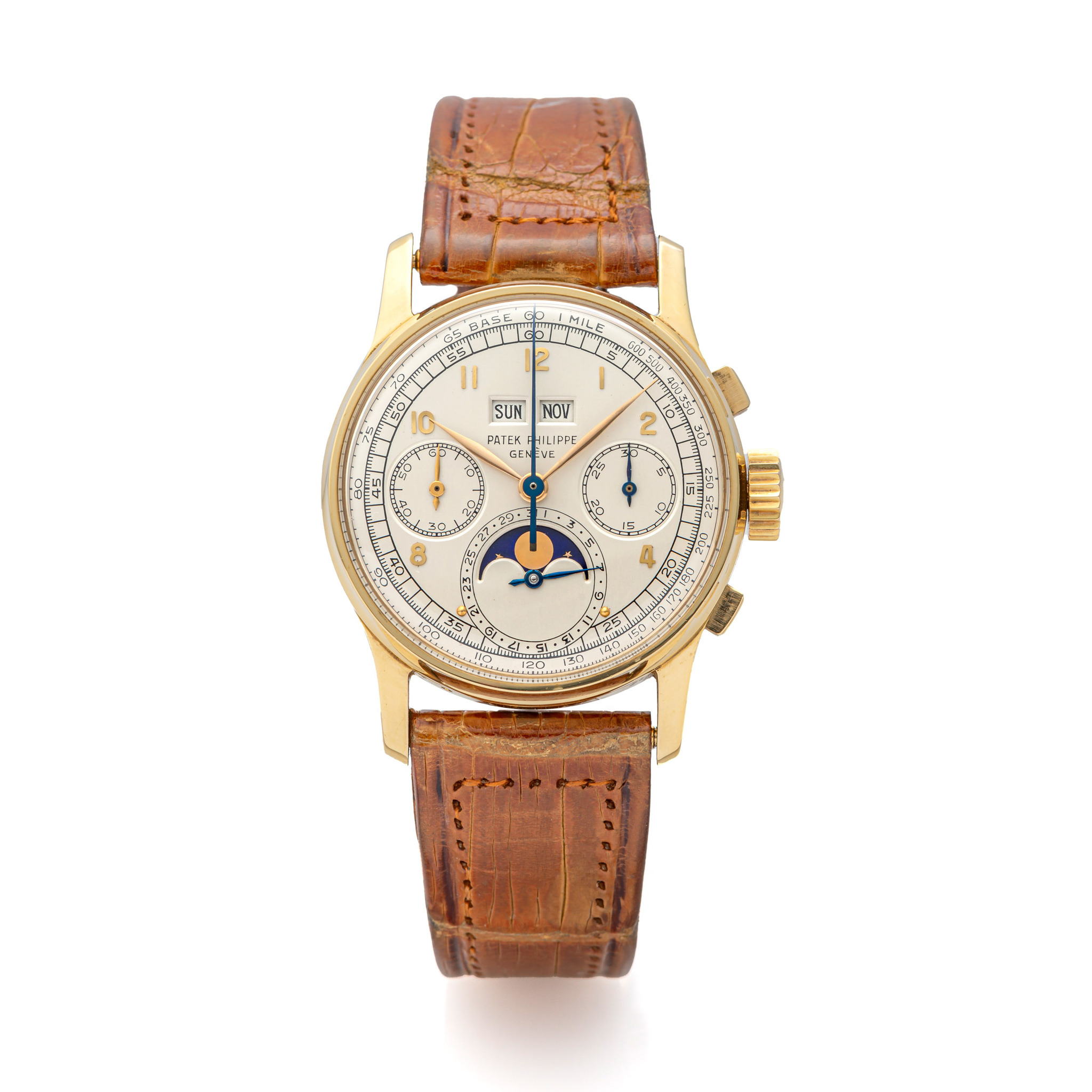 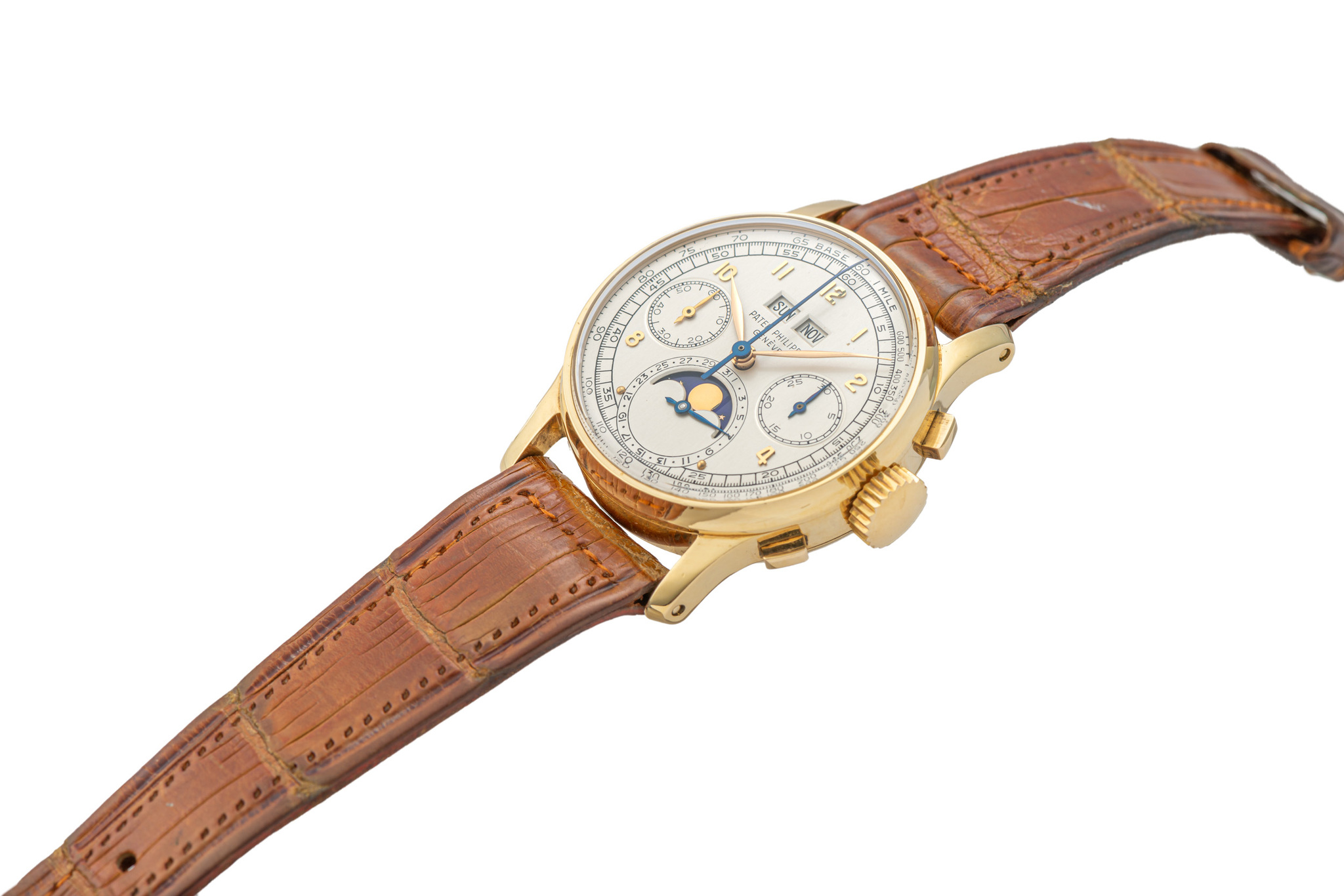 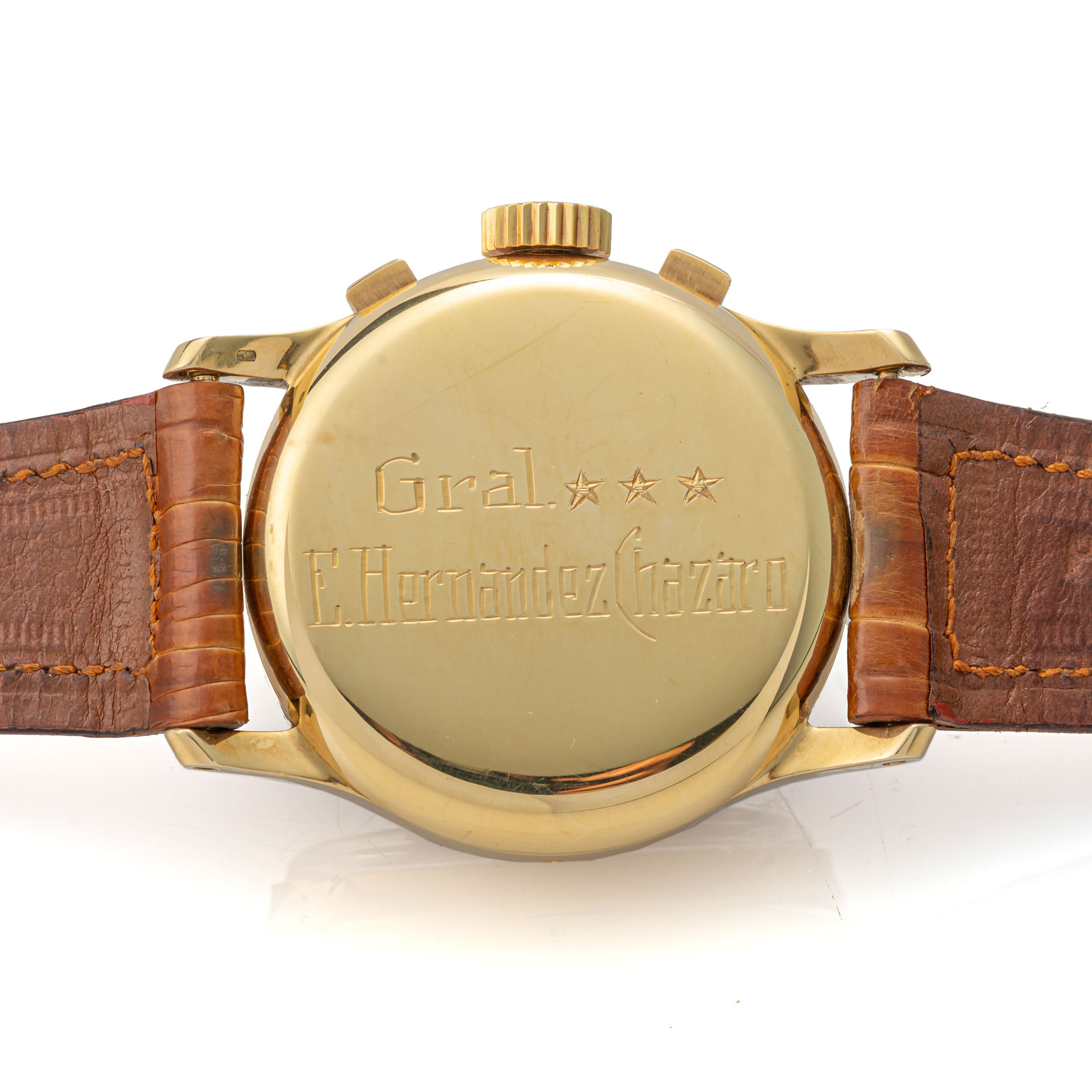 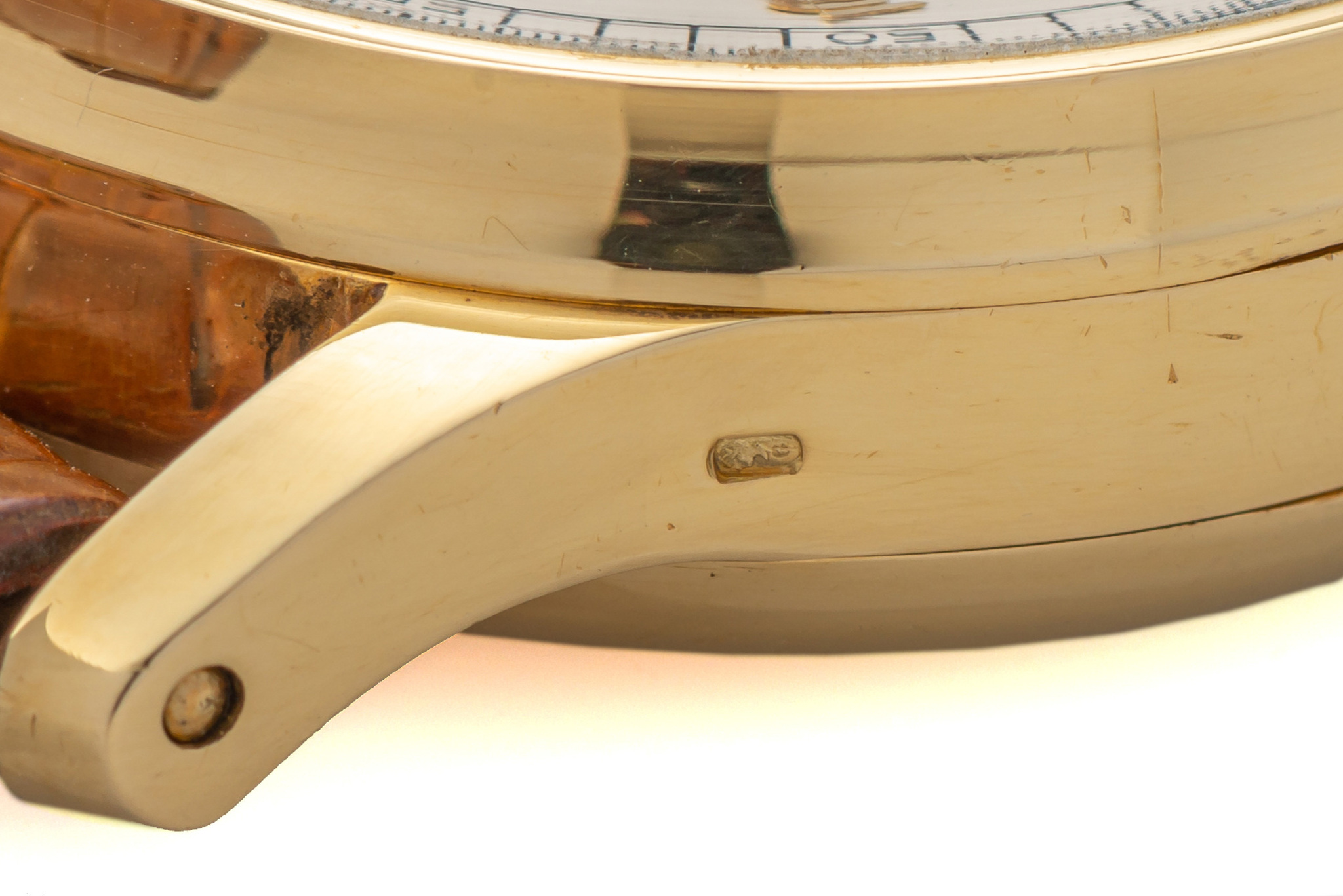 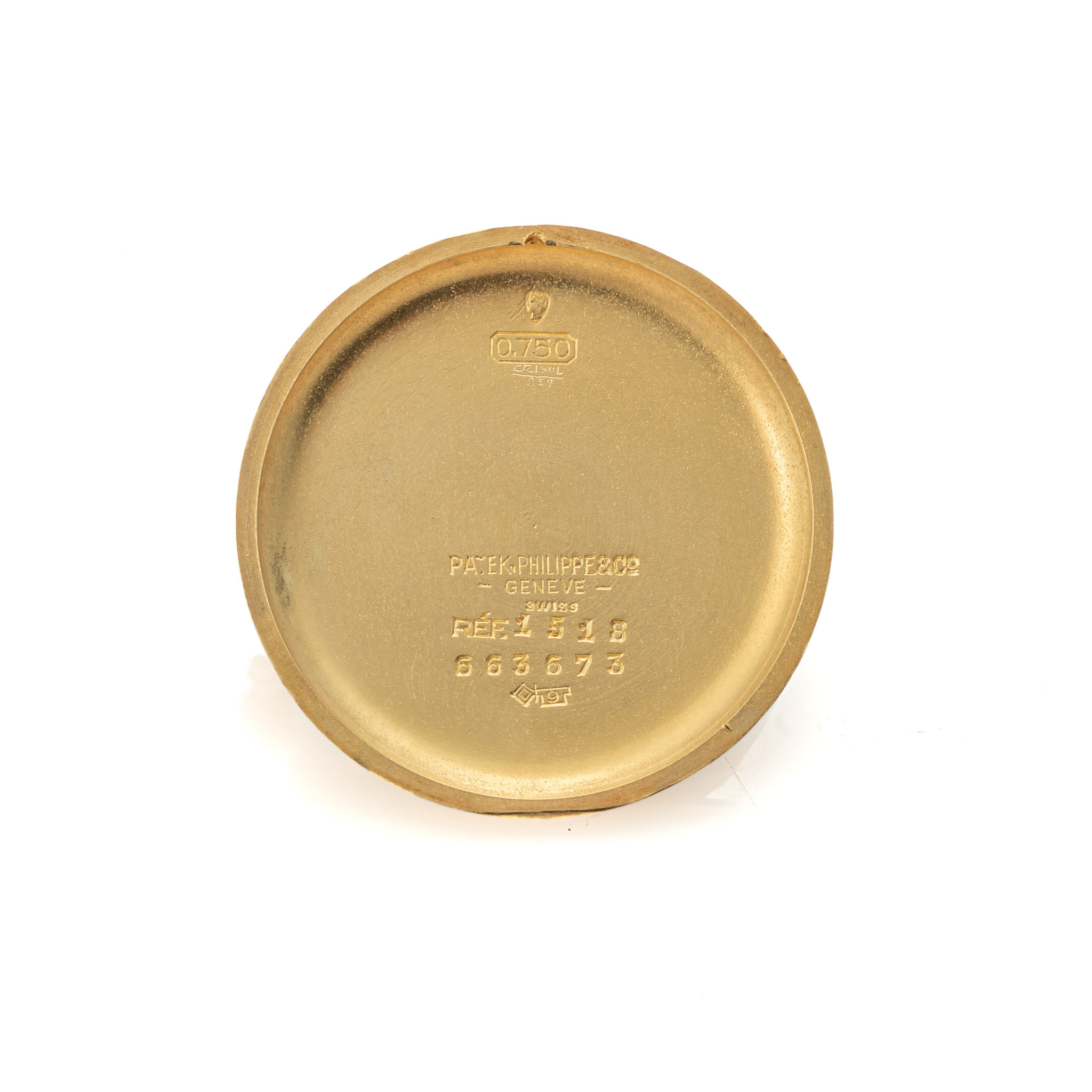 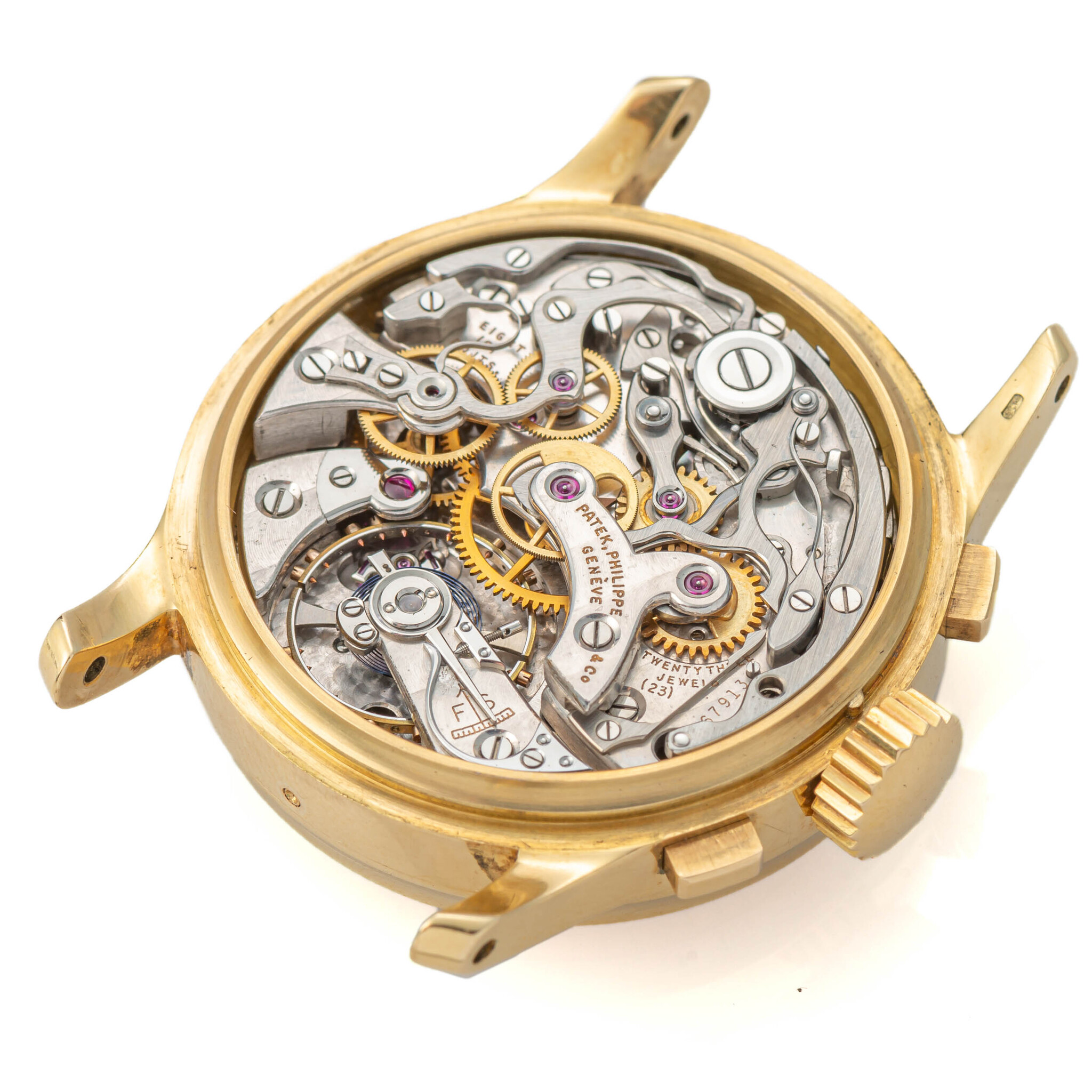 Produced in 281 examples from 1941 to 1954, in yellow and pink gold, only four examples known to date in stainless steel. There are four distinct series of the 1518 although they did not advance chronologically as such but were available at the same time. - First series: with applied gold Arabic numerals from 1941 to 1954. - Second series: presented at the Basel Fair in 1942 with enameled hour indexes, the 12 in applied gold Arabic numerals. - Third series: with applied gold indexes, the 12 in applied gold Arabic numerals. - Fourth series: with applied gold baton indexes. With only 281 examples having been made in total, finding a fresh to the market 1518 is becoming rarer and rarer. This example has stayed with the current family for over 25 years and is in amazing condition. Its case has maintained not only one, but two hallmarks (one to the side and one under the lug) and one can easily see from the thickness and pin holes to the lugs that it has seen little polish over the years.

Eduardo Hernández Cházaro : born in Tlacotalpan in 1898 and died in Mexico City in 1957.
He studied at the school of his uncle Miguel Z. Cházaro, friend of General Porfirio Díaz. At the age of twelve he sympathized with the Maderista movement, which he followed to Mexico City.
Then constitutionalist; he fought Victoriano Huerta with Murguía. Federal deputy from 1918 to 1920. In 1920 he joined the Agua Prieta Plan.
Assistant to General Joaquín Amaro and Presidents Álvaro Obregón –with whom he participated in the Southwest campaign against the forces of Victoriano Huerta– Plutarco Elías Calles, Emilio Portes Gil and Pascual Ortiz Rubio.
Chief of Staff and private secretary of the Presidency with Pascual Ortiz Rubio and later head of the Central Department. Consul in San Antonio, Texas, in 1945. Chief of Operations in Tlaxcala and the State of Mexico. He participated in the campaign of General Ávila Camacho for President of the Republic. Federal deputy to the XXVIII legislature. He reached the rank of Major General.
One of the most interesting stories of his life came in April 1936 as told by Times magazine : One night last week the British-operated Ferrocarril Mexicano’s night train from the port of Veracruz to Mexico City took on an oil-burning locomotive at Paso del Macho, began to wind its slow way through the rugged uplands toward the 7,400-ft.-high capital. When the train had rumbled half way across Paso Grande Bridge a dynamite explosion slapped the locomotive and tender against the bank of a 40-ft. ravine, tumbled two wooden sleeping cars to the ravine’s bottom. Oil from a tank caught fire and flames engulfed the wreckage. A man pinned in the debris pleaded in vain to be shot as the conflagration approached him.
Final count: 13 dead, 18 injured. Investigators discovered 200 yards of double wire leading from the bridge to a detonator.
In one of the cars which teetered on the broken bridge was a group of politicians including Colonel Eduardo Hernandez Chazaro, candidate for Governor of Veracruz. He had no doubt that his own enemies had done the bombing. Convinced that the “intellectual author” of the deed was onetime Dictator Plutarco Elias Calles, ousted from his country last week, President Lazaro Cardenas ordered an investigation to ferret out the actual perpetrators.