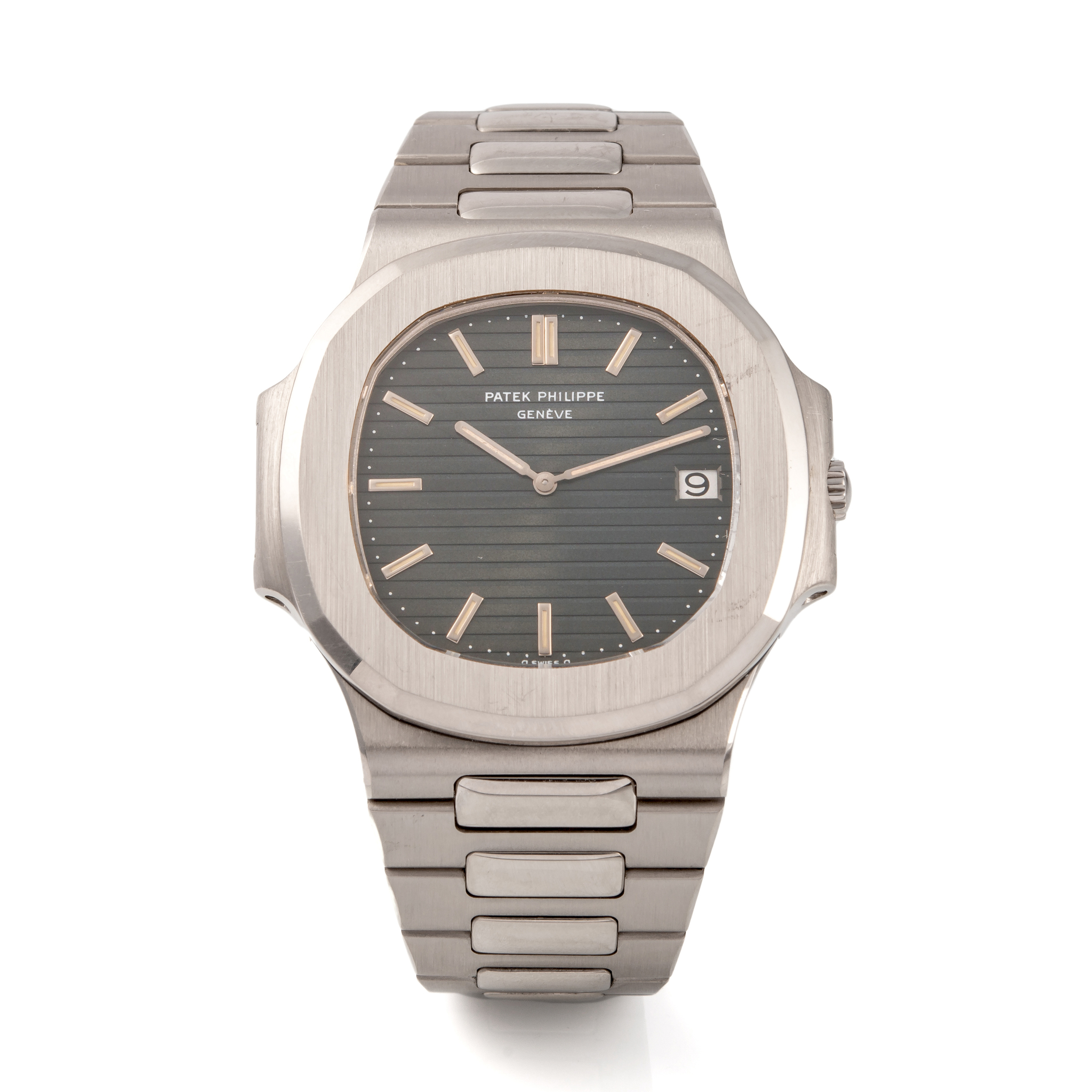 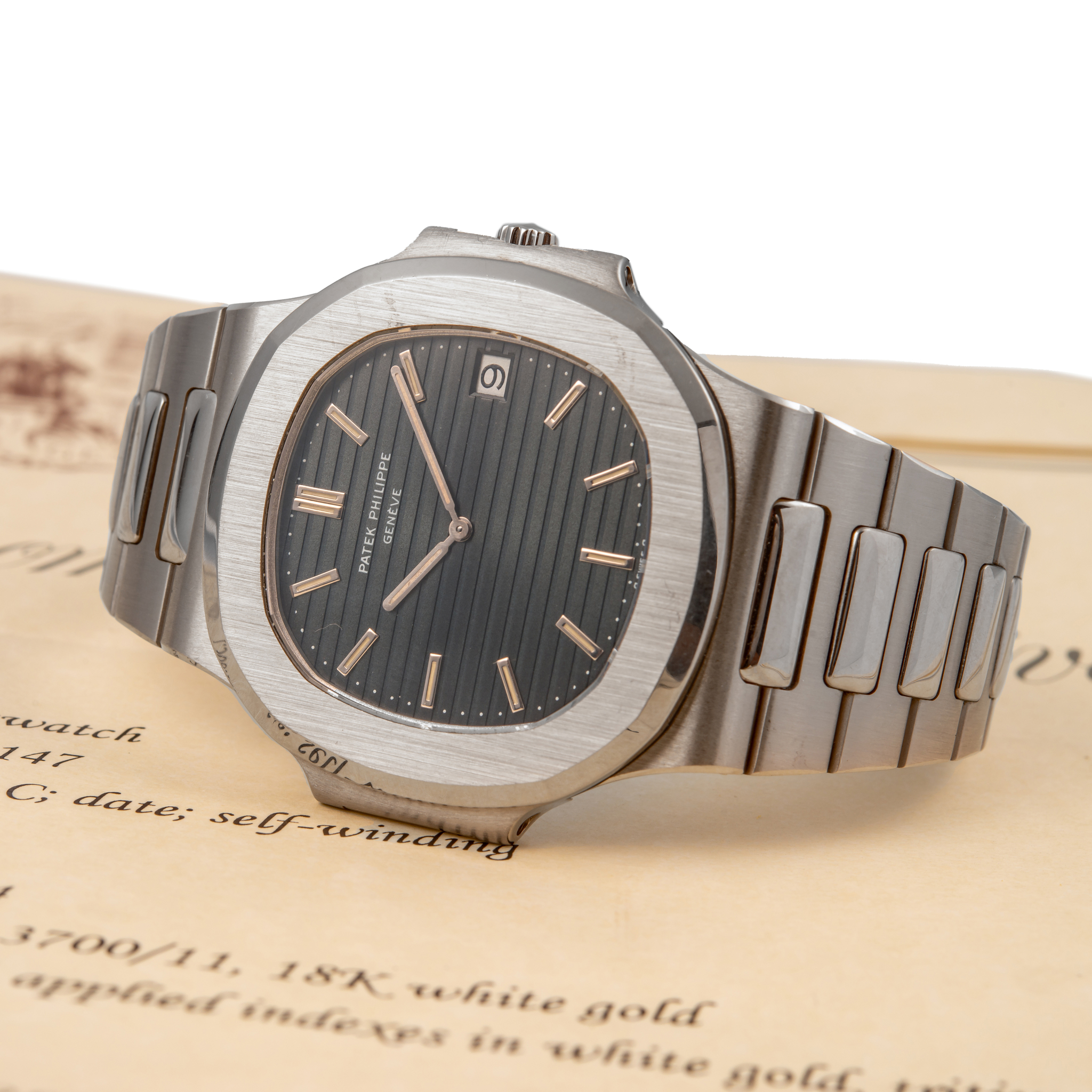 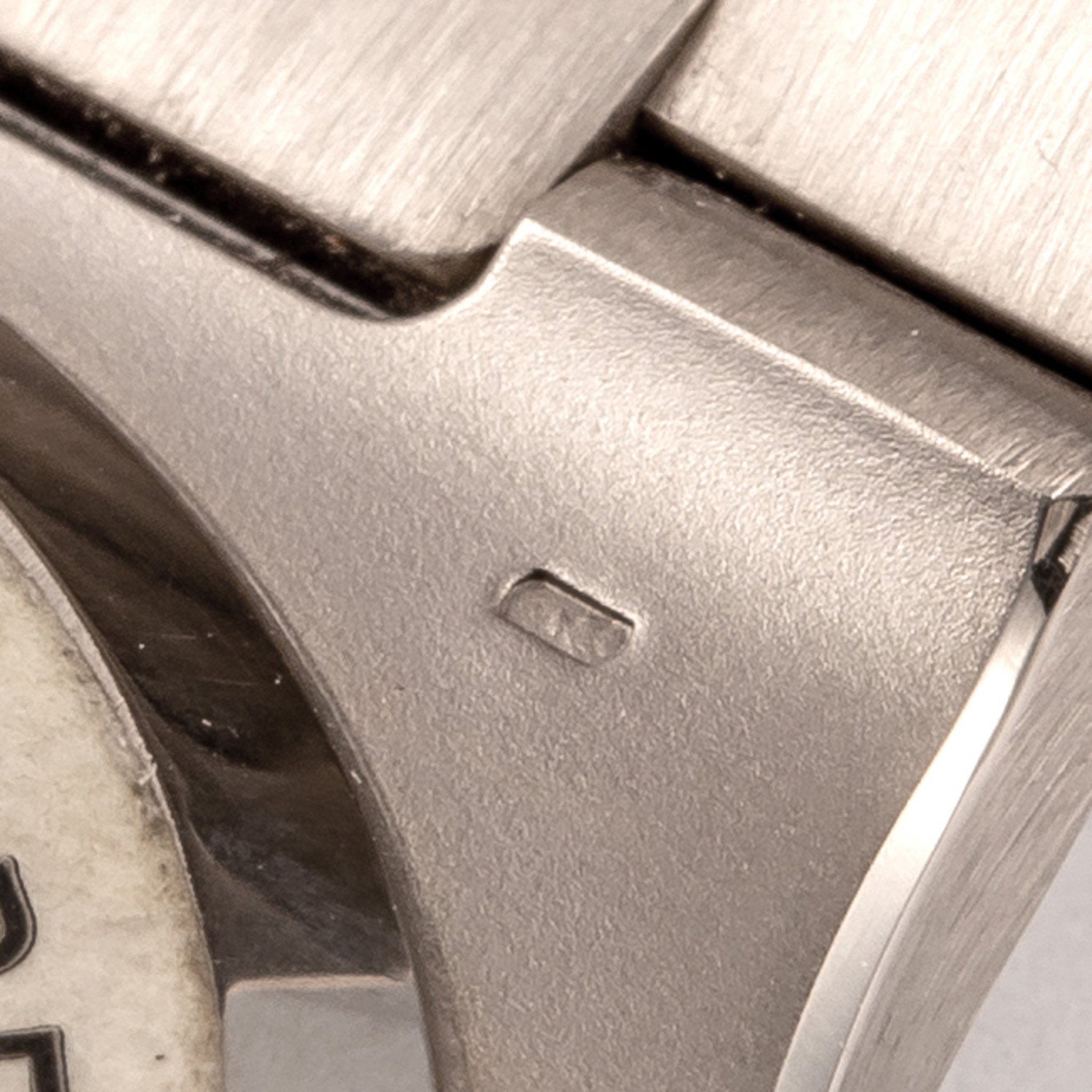 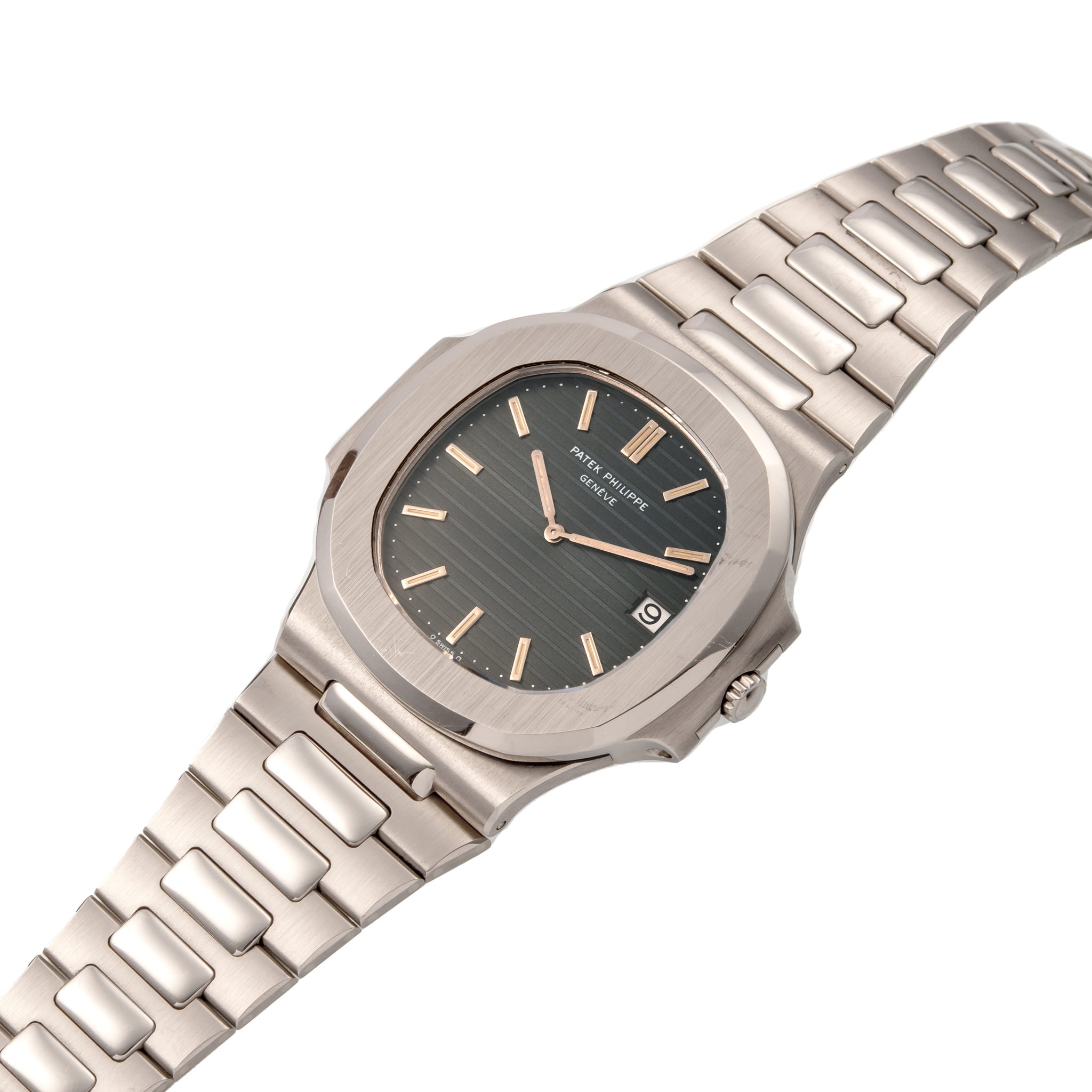 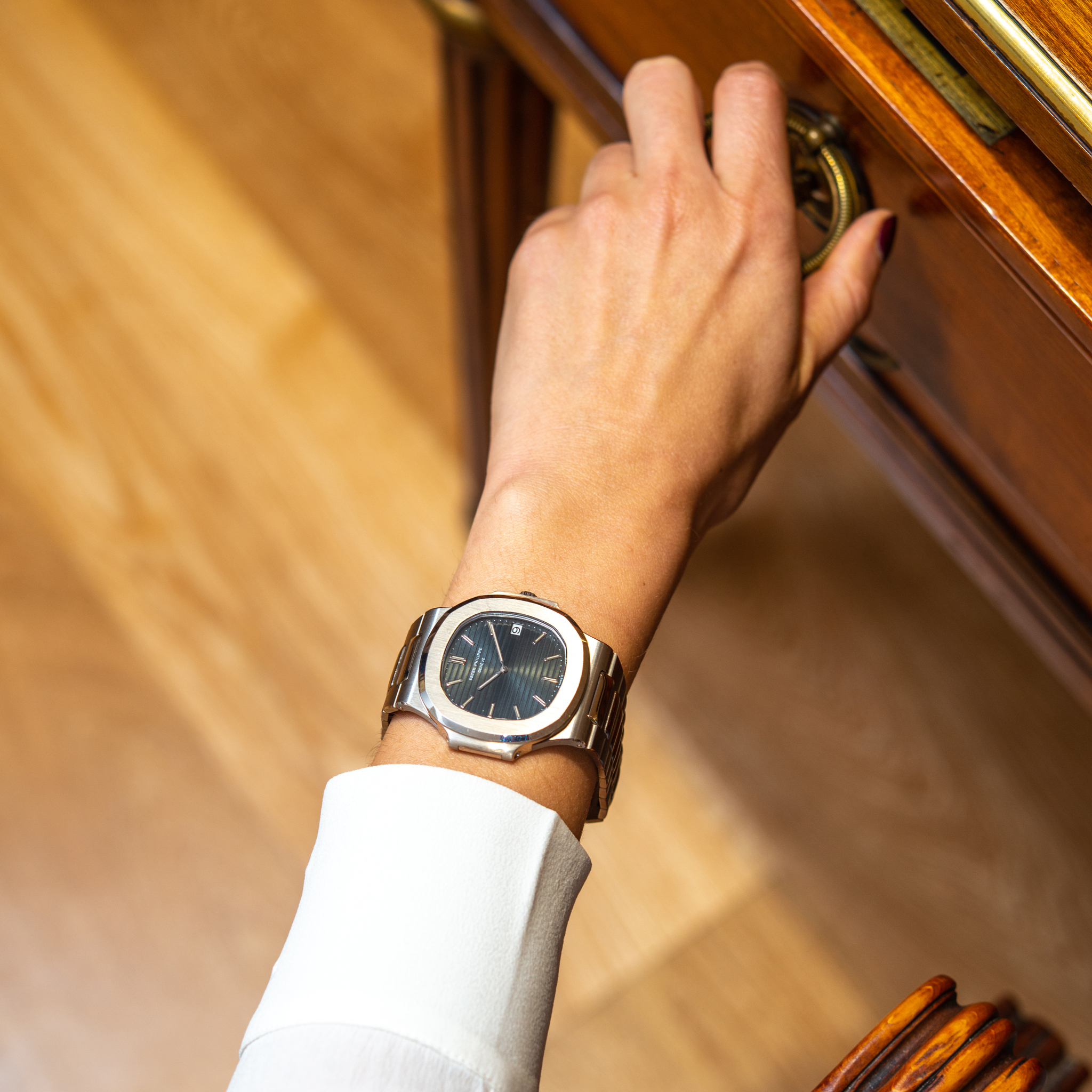 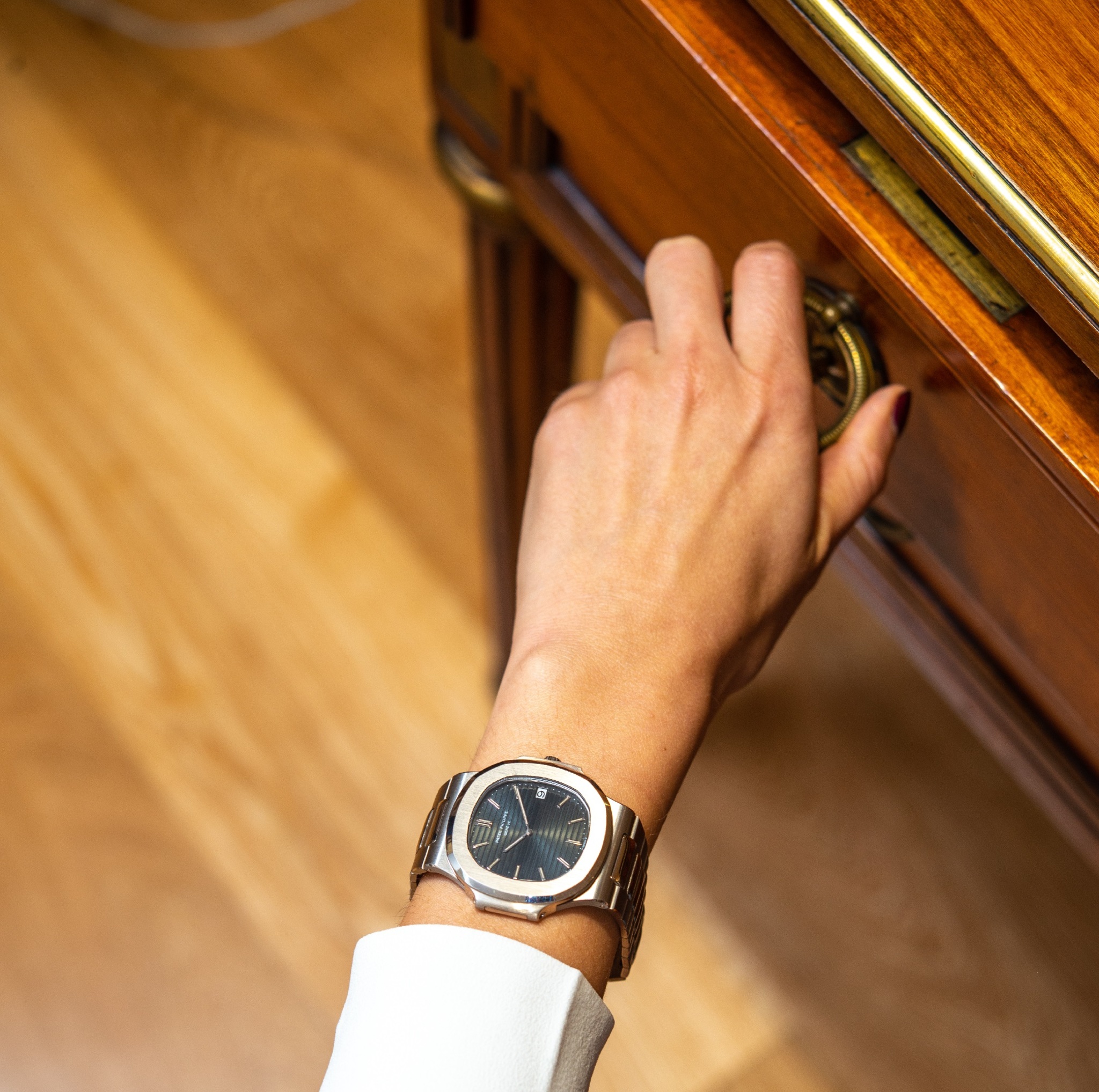 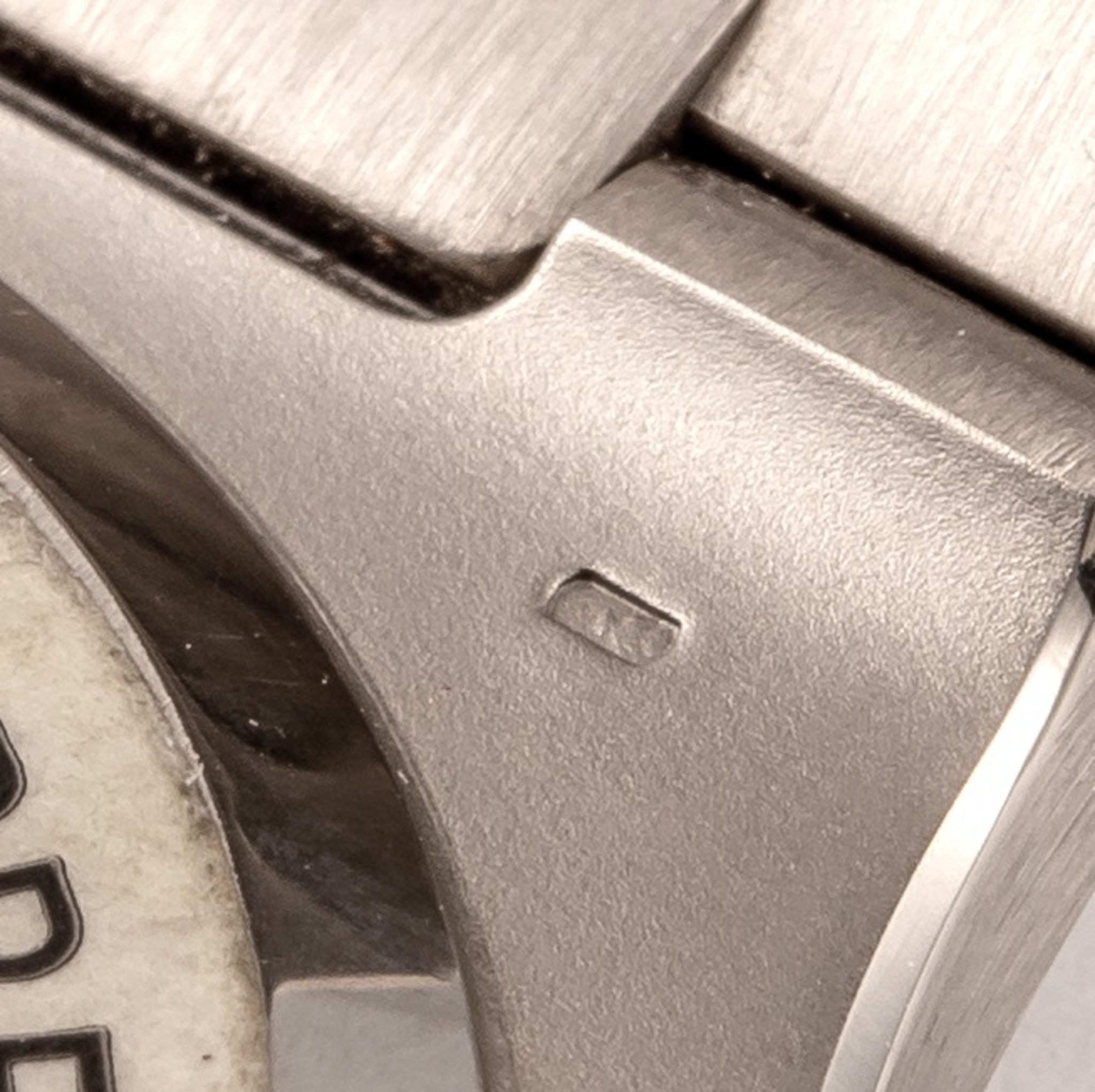 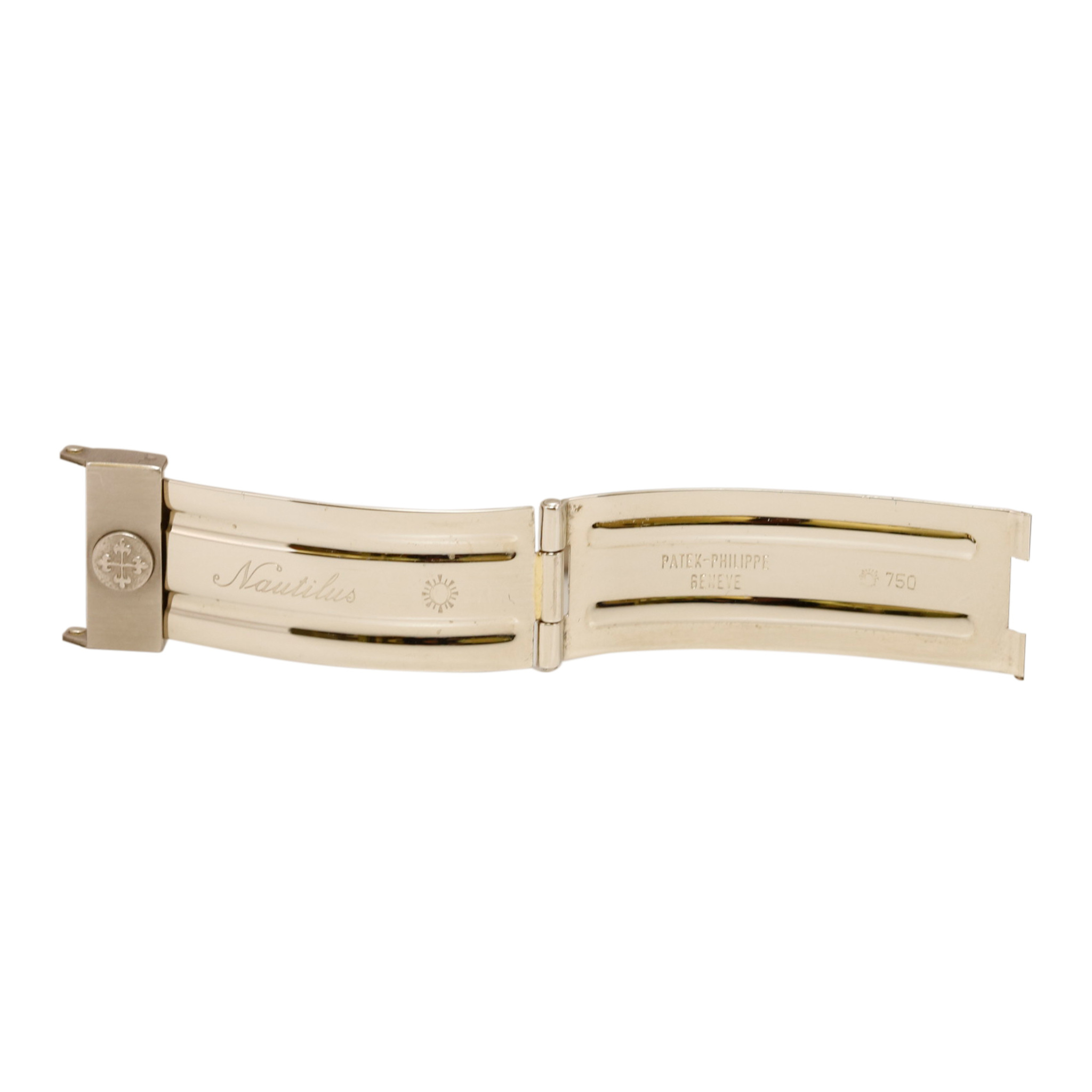 The 18K white gold Patek Philippe “Nautilus” Ref. 3700 / 11
The extremely rare Ref. 3700 in 18K white gold is known from only twelve pieces. This small watch series is exactly referenced by the Genevan manufacture under the number 3700 / 11.
Of these twelve watches, two have a “tapered” integrated white gold bracelet.
Our watch, with its “tapered” bracelet is therefore one of only two known in this configuration; this makes it one of the two rarest white gold “Nautilus” in the world.
The present watch is preserved in outstanding condition, with sharp edges and bevels on all sides. The bracelet is mounted with its original 18K white gold “Nautilus” clasp manufactured by Gay Frères, Geneva. The hallmarks are clear and visible under the lugs. In addition, the case has a beautiful shine and glows incandescently, as only white gold can do!
The condition and ultimate rarity of this white gold “Nautilus” make it a must-have for the serious connoisseur.
--
Patek Philippe, “Nautilus”, Ref. 3700, so-called “Jumbo”
Launched in 1976, the “Nautilus”, named after Captain Nemo’s submarine (created by Jules Verne in his “Vingt mille lieues sous les mers”), was an immense breakthrough from Patek Philippe’s conservative designs and proof that Haute Horlogerie and audacity can go hand in hand to create an icon that is still relevant 40 years later.
Legend has it that the idea of creating a watch in the shape of a porthole found on transatlantic liners came to designer Gérald Genta (1931-2011), a Genevan designer jeweller, whilst dining at a restaurant during the Basel fair and looking at the Patek Philippe team dining on a table opposite his. The whole design having taken no more than 5 minutes!
Patek Philippe produced two versions of the Nautilus Ref. 3700 in steel:
· 3700 / 1, from 1976 to about 1981, that featured a straight bracelet and reference;
· 3700 / 11, which was in production from 1981 to 1990 has a tapered steel bracelet.
Beating within is the Cal. 28-255 (based on the legendary Jaeger-LeCoultre JLC 920 self-winding movement; which was never used by Jaeger-LeCoultre!) and heavily modified by Patek Philippe, it was at the time the world’s thinnest self-winding movement with date (3.05 mm. thick) and found in two other models representing Haute Horlogerie groovy chic: Audemars Piguet’s “Royal Oak” and Vacheron Constantin’s “222”; the first, also design by Genta; the second, designed by Jorg Hysek, a young German designer (born in 1953).
Originally, the Ref. 3700 / 1 A comes with a coveted cork presentation box.
Owing to a thinner calibre, the 3700 / 1 A retains a slimmer profile than its 21st century descendent, the 5711 / 1 A, introduced on the 40th anniversary of the 3700 in 2006.
The “Jumbo” moniker refers to the 42 mm. case, with wide flat bezel, integrated steel link bracelet, and self-winding movement, possessing a rather masculine aesthetic compared to the smaller dressy gold mechanical watches of the time.
While it was initially not well received, its popularity quickly grew, and has been a mainstay of Patek Philippe’s collection until the present day.
--
“Sigma” dials
In the 1970s, the presence of the two Greek letters “Sigma” on either side of “SWISS” was intended to give a distinctive sign to Swiss-made dials with solid gold hour-indexes. Only members of APRIOR (Association pour la Promotion Industrielle de l’Or) were entitled to use this mark; among them, Patek Philippe, Rolex, Vacheron Constantin, IWC and Omega.