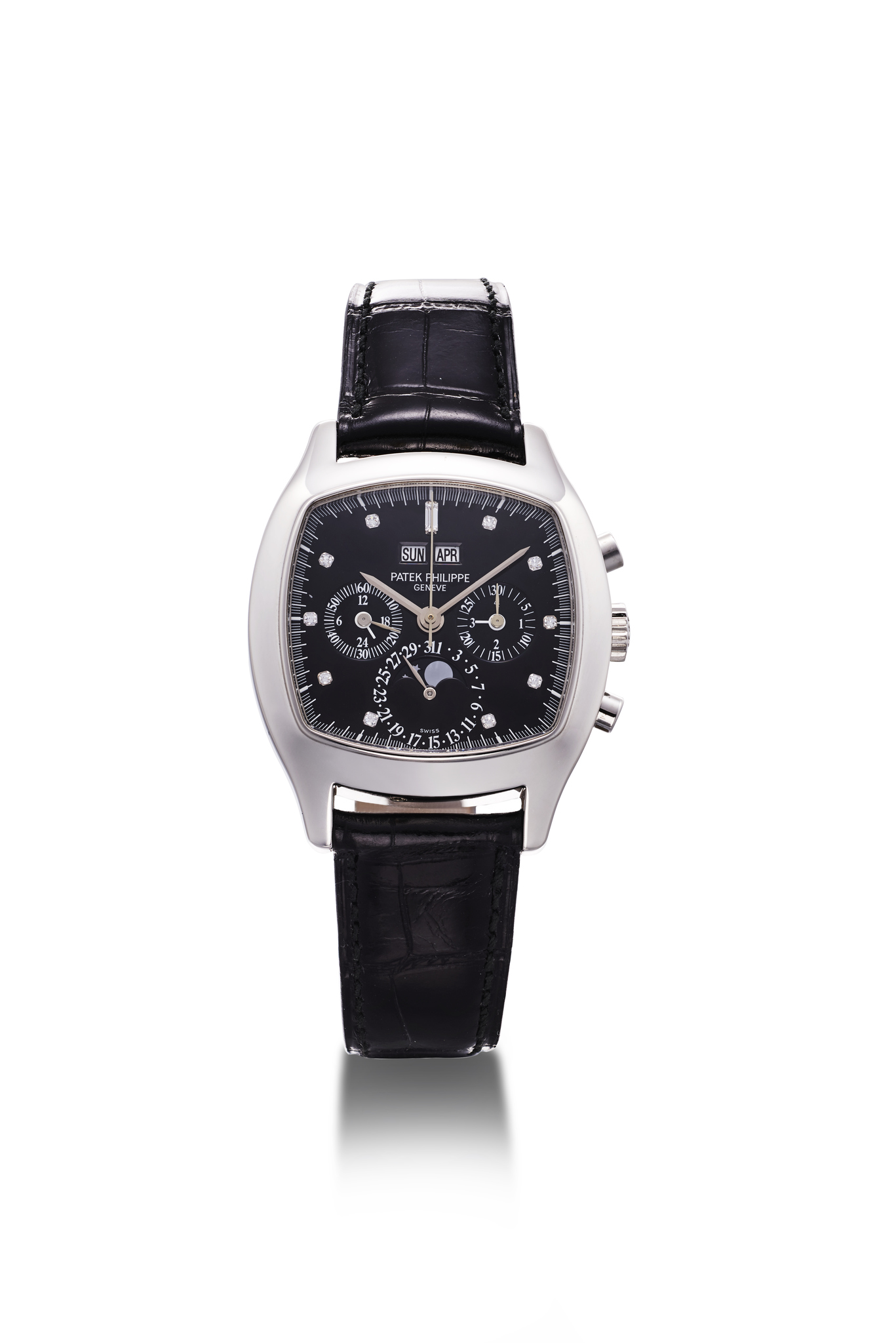 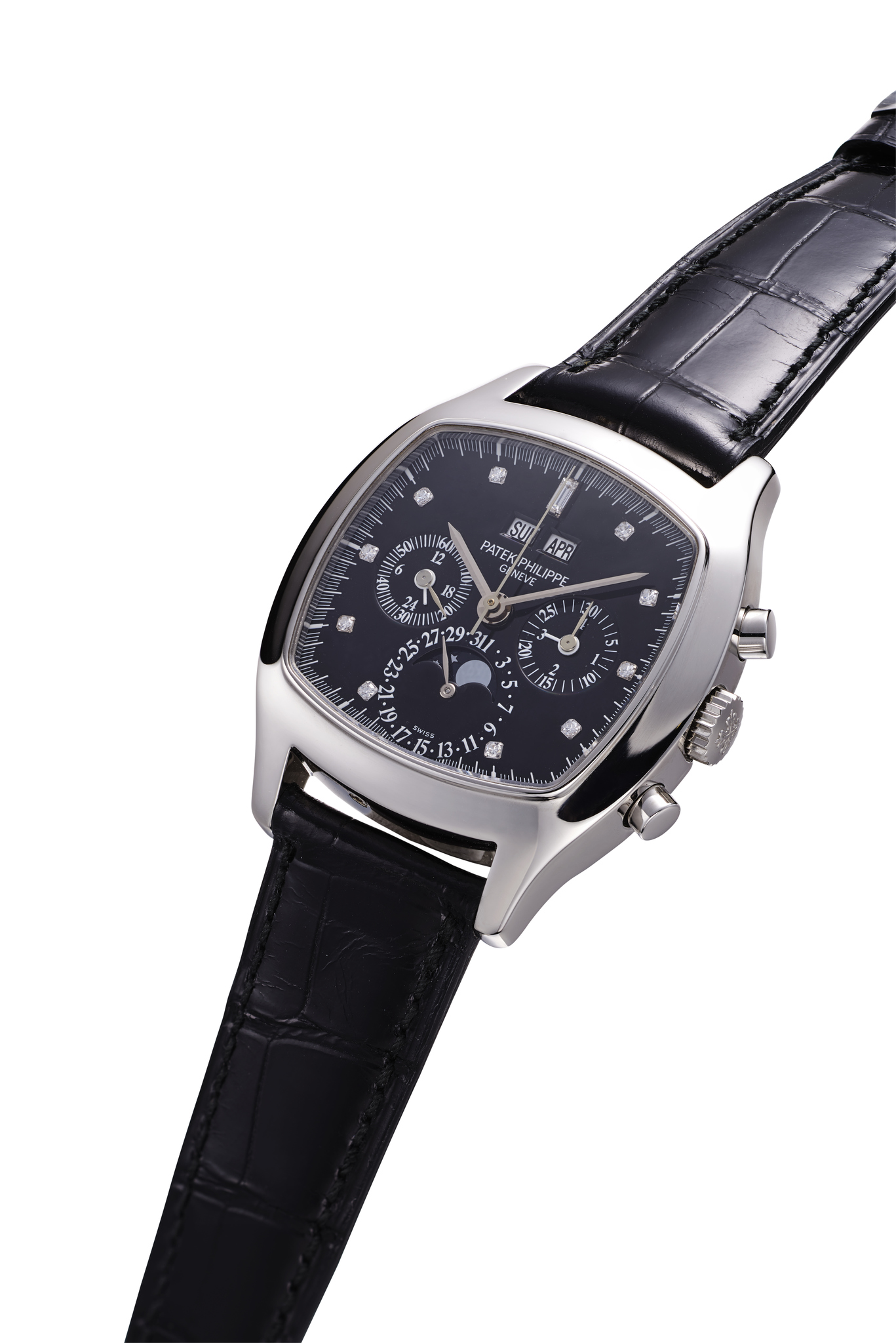 Platinum, cushion-shaped, gentleman’s wristwatch, snap-on case-back, with subsidiary seconds at 9 and nine horological complications: - 1/5 second chronograph with round push-pieces - Half-instantaneous 30-minute recorder (subsidiary dial at 3 o’clock) - Half-instantaneous perpetual calendar à guichets (with apertures) - Date of the month (subsidiary dial at 6 o’clock) - Day of the week (aperture at 11 o’clock; indications given in English) - Month of the year (aperture at 1 o’clock; indications given in English) - Four-year cycle of leap-years (subsidiary dial at 3 o’clock) - Phases of the moon (aperture at 6 o’clock) - Diurnal (day-time) and nocturnal (night-time) hours with a 24-hour (AM-PM) scale (subsidiary dial at 9 oBlack colour “semi-glossy” dial set with diamonds indexes (nine brilliant-cut diamonds and one baguette-cut diamond). Condition report (grading system, autumn 2018) The Extract from the Archives, dated March 12, 2019, mentioned that this watch was sold on December 22, 2000. Patek Philippe, Reference 5020 This reference is launched in 1994 and remained in production until circa 2002 (a relatively short period). The Ref. 5020 is fitted with calibre 27-70 Q, like the famous Ref. 3970. Due to its unusual shape and its similarity with the more traditional 3970, featuring the same horological complications and movement, it was not produced in large numbers. In fact, while the Ref. 5020 was relatively unpopular upon its launch, it is fair to say that Patek Philippe was in advance with this watch. Many examples remained unsold for years before collectors understood its rarity; few of them who really appreciated its unequivocally 1960-70’s large cushion-shaped design combined with perpetual calendar instantly understood its appeal. The Ref. 5020 was available in 18K yellow, pink and white gold, as well as platinum. Very few were fitted with a gold bracelet, all on special request; they were only available at the Patek Philippe boutique in Geneva. Like with many creations, this watch has begun to be appreciated only after it ceased production in 2002 at estimated production of 150 to 200 pieces in total. In retrospect, this is an iconic reference ahead of its time and a trophy for any modern wristwatch collection. Very few examples were cased in platinum (probably less than 20 pieces). To-date, are known only four examples with silver dial and Breguet numerals, and, only THREE examples with “semi-glossy” black dial and diamonds indexes (Ref. 5020 P-018): 1. Sotheby’s, Hong Kong, auction, April 2, 2018, lot 2 923, sold for the amount of HK$ 3 960 000.- 2. The present watch. 3. Antiquorum, Geneva, auction, December 2, 2003, lot 411, sold for the amount of CHF 92 700.- And only one with “semi-glossy” black dial and Breguet numerals: Phillips, Geneva, auction, November 11-12, 2017, lot 230, sold for the amount of CHF 492 500.’clock)