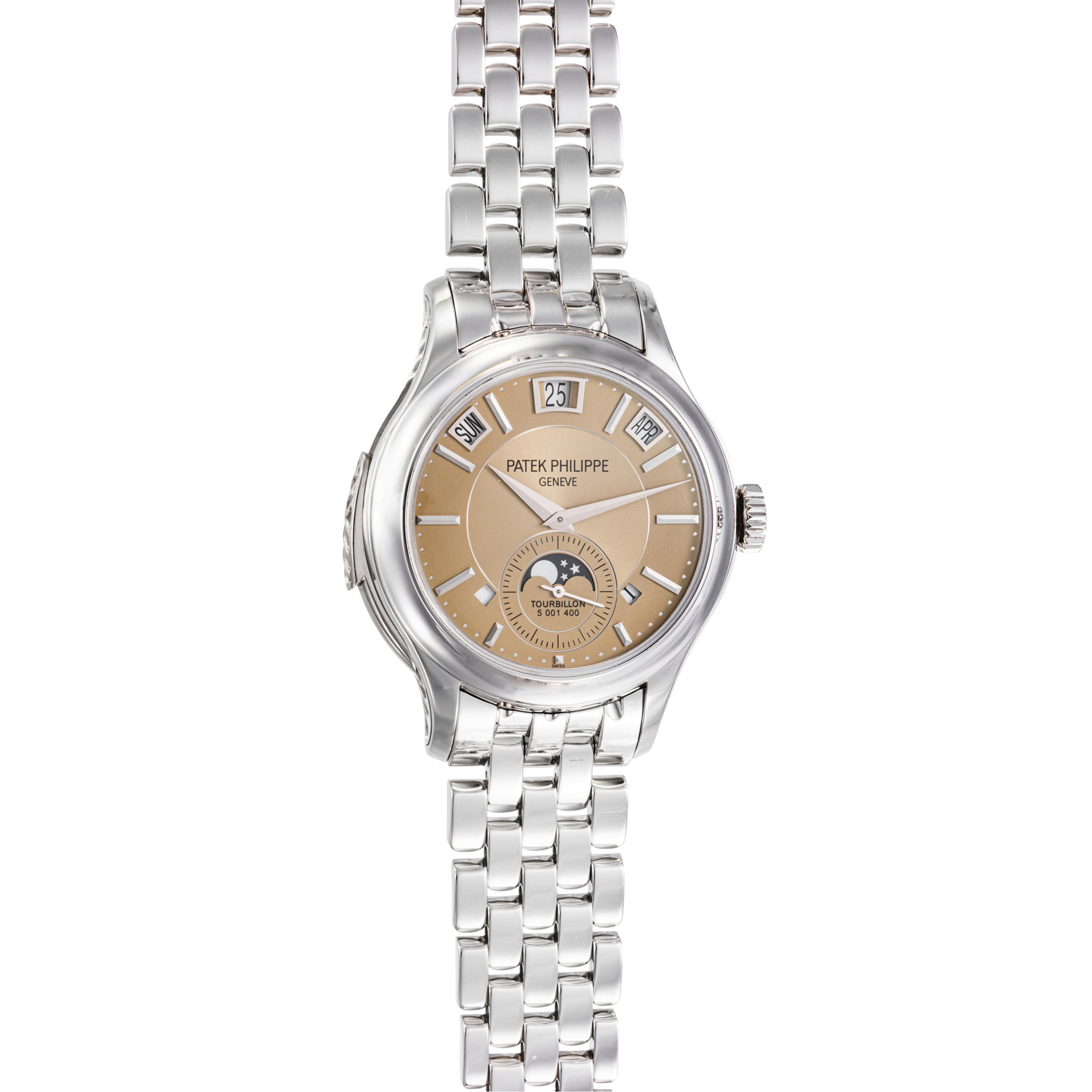 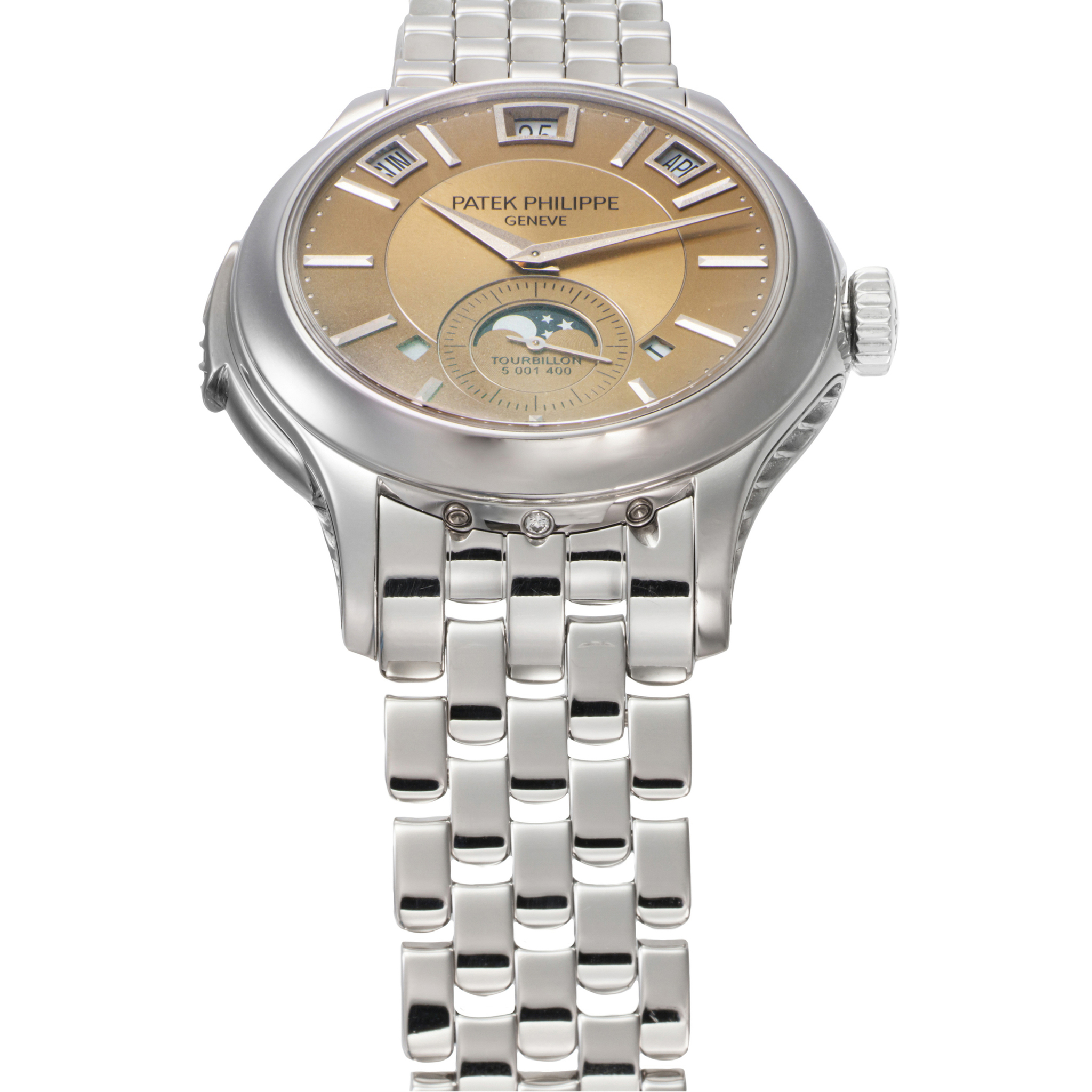 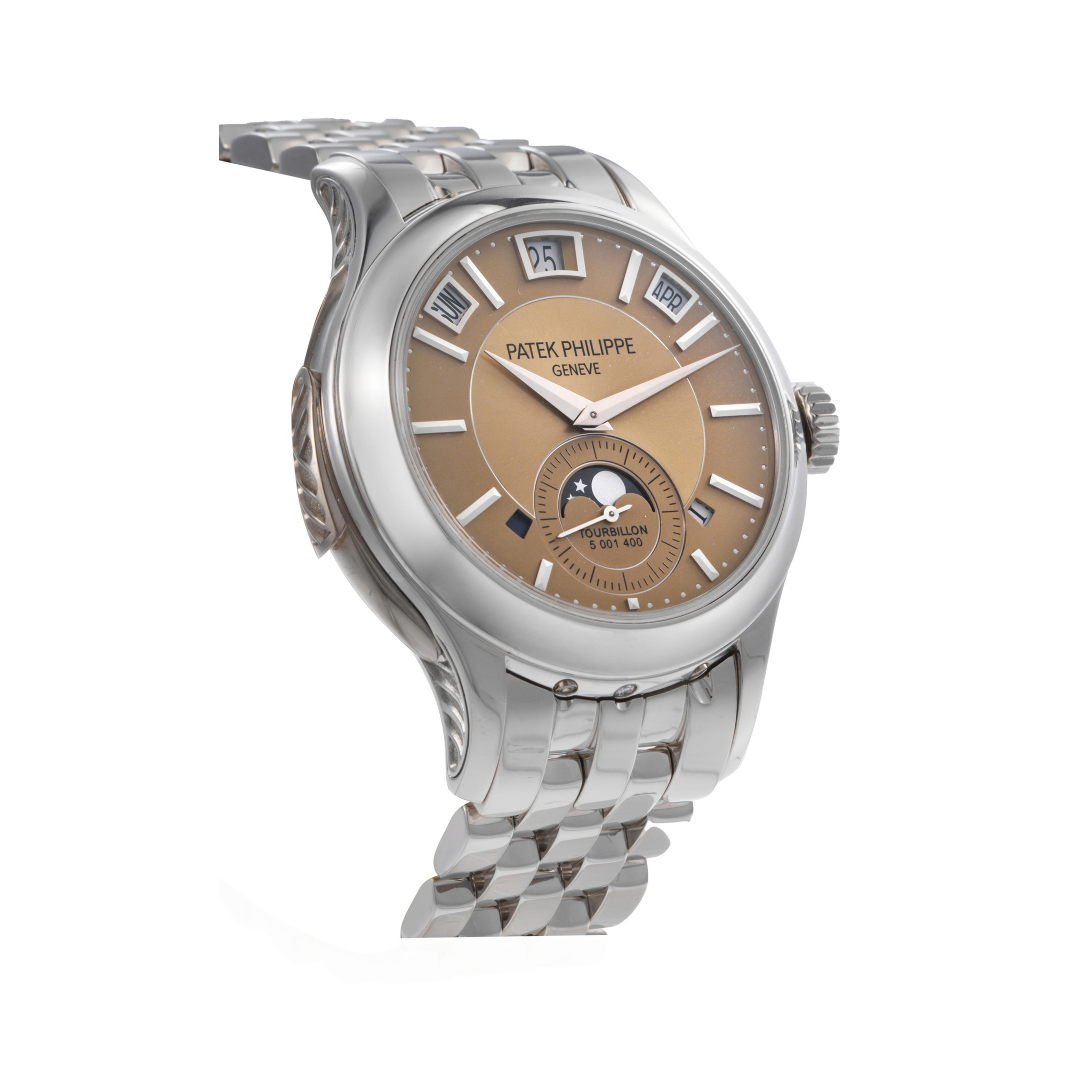 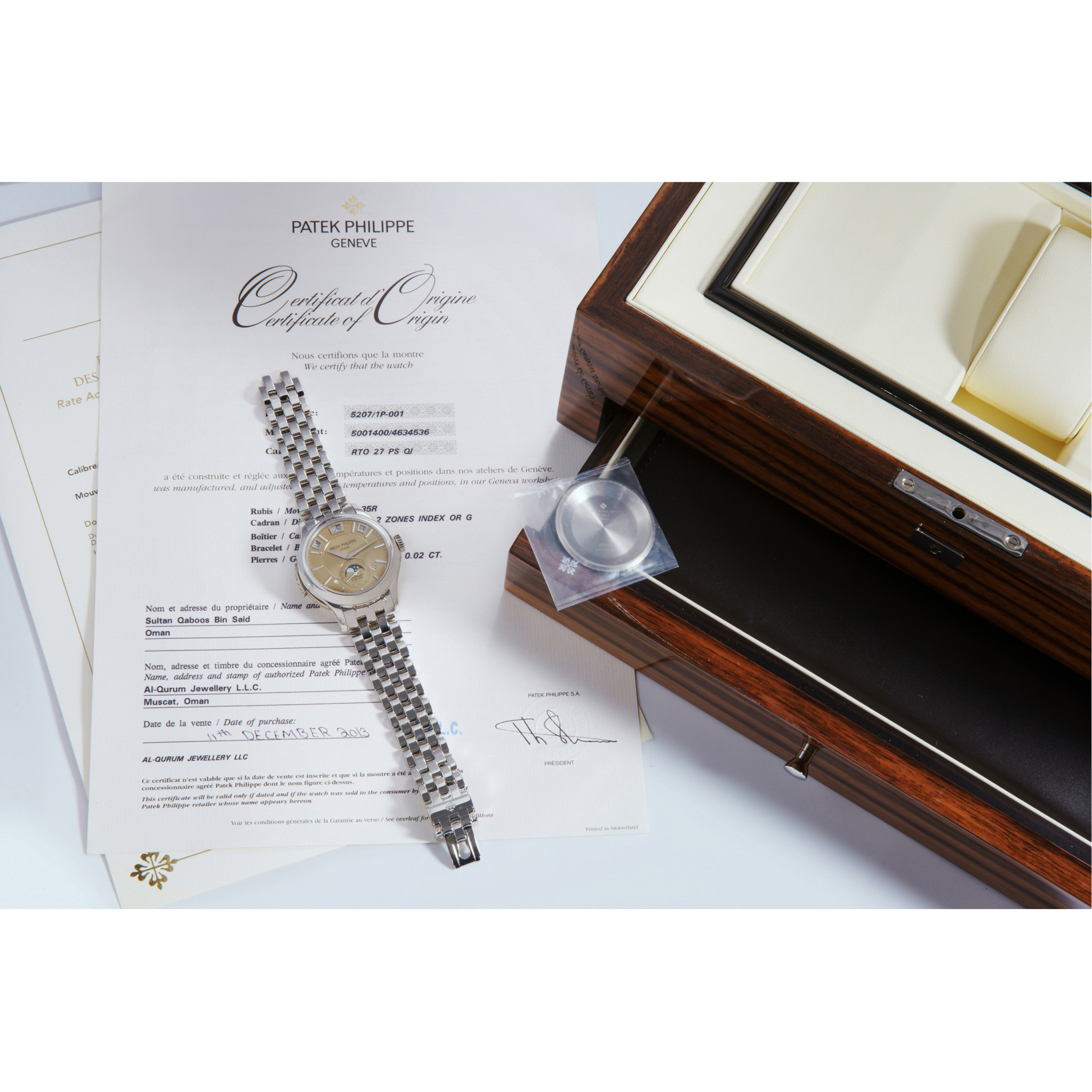 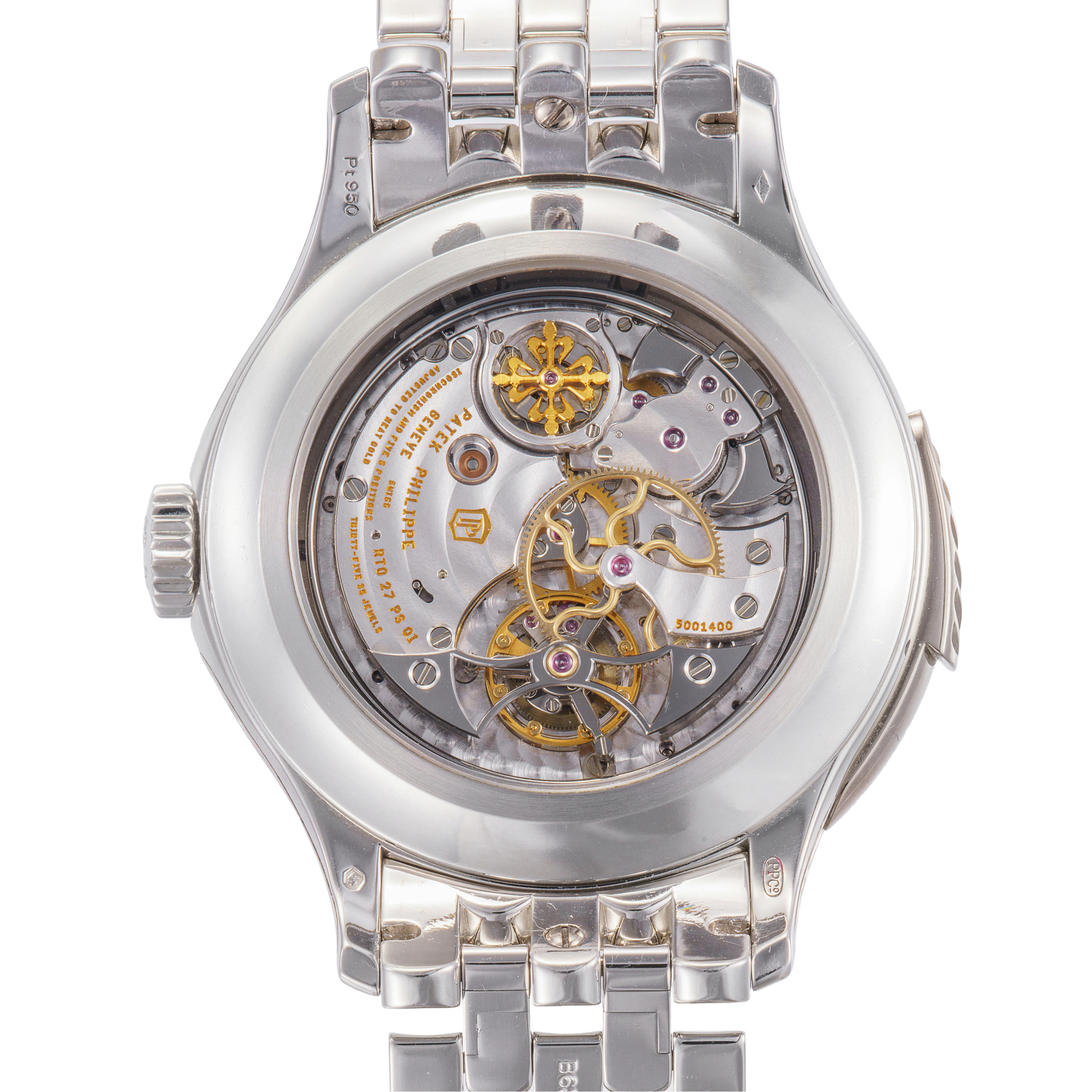 The original Certificate mentioned that this watch was delivered to Al-Qurum Jewellery L.L.C., Muscat (Oman), and sold on December 11, 2013, to Sultan Qaboos Bin Said, Oman.
--
This is the only watch that appears to have been made by Patek Philippe with a platinum bracelet, probably at the special request of the Sultan.

Patek Philippe, Ref. 5207
Production of this reference started in 2008 (launched at BaselWorld 2008). This exceptional creation was conceived, developed and realised over a period of five years, before the launch of the manufacturing process. Only a few examples are produced each year.
The reference is the only wristwatch in the current Patek Philippe collection with a minute-repeater, a one-minute tourbillon regulator and an instantaneous perpetual calendar àguichets (with aperture display). This piece fully deserves its title of “Grande Complication”; … a true summary of what “Haute Horlogerie” is today!
As stated above, this masterpiece combines three of the most challenging complications in watchmaking:
Highly technical, but also beautiful case and dial, with improved readability of the calendar indications thanks to the large apertures placed at the top of the dial.
A true technical tour de force, the Calibre RTO 27 PS QI, consisting of 549 components, is based on the movement developed for the Ref. 5016 over 25 years ago but with a new instantaneous perpetual calendar plate in place of the retrograde perpetual calendar of the Ref. 5016.
Most perpetual calendars have a so-called “dragging” display, but the mechanism of the Ref. 5207 performs an instantaneous change of the calendar display, which means that all calendar indications can change precisely at midnight within a few hundredths of a second.
Note also that Ref. 5207 is the only Patek Philippe perpetual calendar in which the date correction pusher acts only on the date and does not modify the month and year displays.
The calendar mechanism requires considerable energy to operate, so this factor, combined with the use of the tourbillon, represented a considerable technical challenge for the Master watchmakers at Patek Philippe.
One of the visual wonders of the movement is the central wheel in 14K gold, whose design is inspired by the wheel of a watchmaking tool. It takes an incredible ten hours of work to make this wheel alone.
Although two centuries have passed since its invention, the tourbillon is still relevant in the contemporary watch industry. It compensates for the fluctuations and errors in time measurement caused by the position in which a watch is placed. For example, watches with traditional movements may give excellent time when placed horizontally on a desk, but when the same watch is placed vertically in a pocket or on the wrist, gravity affects the frequency or rate of the escapement and therefore its accuracy. Invented by Abraham-Louis Breguet (1747-1823), the tourbillon compensates for these gravitational effects by placing the escapement in a rotating carriage. As the tourbillon cage revolves (typically one full revolution per minute), its position is constantly changing and, as a result, fluctuations in frequency caused by gravity are compensated for. Once a tourbillon watch is properly adjusted, the effects of gravity are essentially cancelled out, regardless of its position.
Like all Patek Philippe watches with a minute-repeater, this timepiece has been personally tested and approved by Mr. Thierry Stern – in a tradition established by his father, Mr. Philippe Stern – before being offered for sale or delivered to the customer who ordered it.
--
Qaboos bin Said (Arabic Qābūs ibn Saʿīd), Sultan of Oman (1970-2020)
Ṣalālah, Muscat (Oman), November 18, 1940 – Muscat (Oman), January 10, 2020
Qaboos, a member of Oman’s Āl Bū Saʿīd dynasty, was educated at Bury Saint Edmunds, Suffolk, England, and at Sandhurst, the Royal Military Academy, in Berkshire, England. He was called home in 1965 by his father, Saʿīd ibn Taymūr, who kept his son a virtual prisoner for six years while maintaining his subjects in a state of relative underdevelopment despite the country’s growing oil revenues.
In 1970 Qaboos took over the palace in a coup with British support and exiled his father. He immediately undertook a range of ambitious modernization projects, including constructing roads, hospitals, schools, communications systems, and industrial and port facilities. He abrogated his father’s moralistic laws and established a Council of Ministers (cabinet) and first one and later two consultative bodies. Political power, however, remained concentrated in the royal family, although Qaboos’s regime gradually allowed other Omanis (including women) to participate in the government. In 1996 he promulgated Oman’s first constitution, which formalized both a consultative legislature and the sultan as the unifying symbol of the state. Universal suffrage was granted to all Omani citizens at least 21 years of age, though political platforms, parties, and unauthorized public gatherings remained prohibited.
Qaboos made considerable progress in ending Oman’s isolation. He opened diplomatic relations with Oman’s neighbours, and Oman joined the Arab League and the United Nations. The country became a founding member of the Gulf Cooperation Council (GCC) in 1981, though it has resisted efforts toward military and economic unity. Notably, however, Qaboos maintained cordial relations with a wide range of countries regardless of their political alignment, including Iran, Saudi Arabia, and Israel, and navigated neutrality on a number of contentious regional issues, including Iranian nuclear ambitions, the GCC’s blockade of Qatar, and the civil war in Yemen. At times, Qaboos was able to position himself as a trusted mediator in the region’s tensest situations, including an interim nuclear agreement between the United States and Iran in 2013.

Qaboos began seeking treatment for terminal colon cancer in 2014. Because he centred the state on himself and had no children of his own, observers began to speculate about potential successors. Constitutional law dictated that the royal family would choose a successor, but, should they fail to reach a consensus, a letter left by the deceased sultan would determine the successor. In December 2019 Qaboos was treated for an illness in Belgium but unexpectedly returned just a week later, prompting rumours that he was in his final days. His death was announced on January 10, 2020, and the next day the royal family opted to open Qaboos’s envelope, which named his cousin Haitham bin Tariq as his successor.
Source
https://www.britannica.com/biography/Qaboos-bin-Said