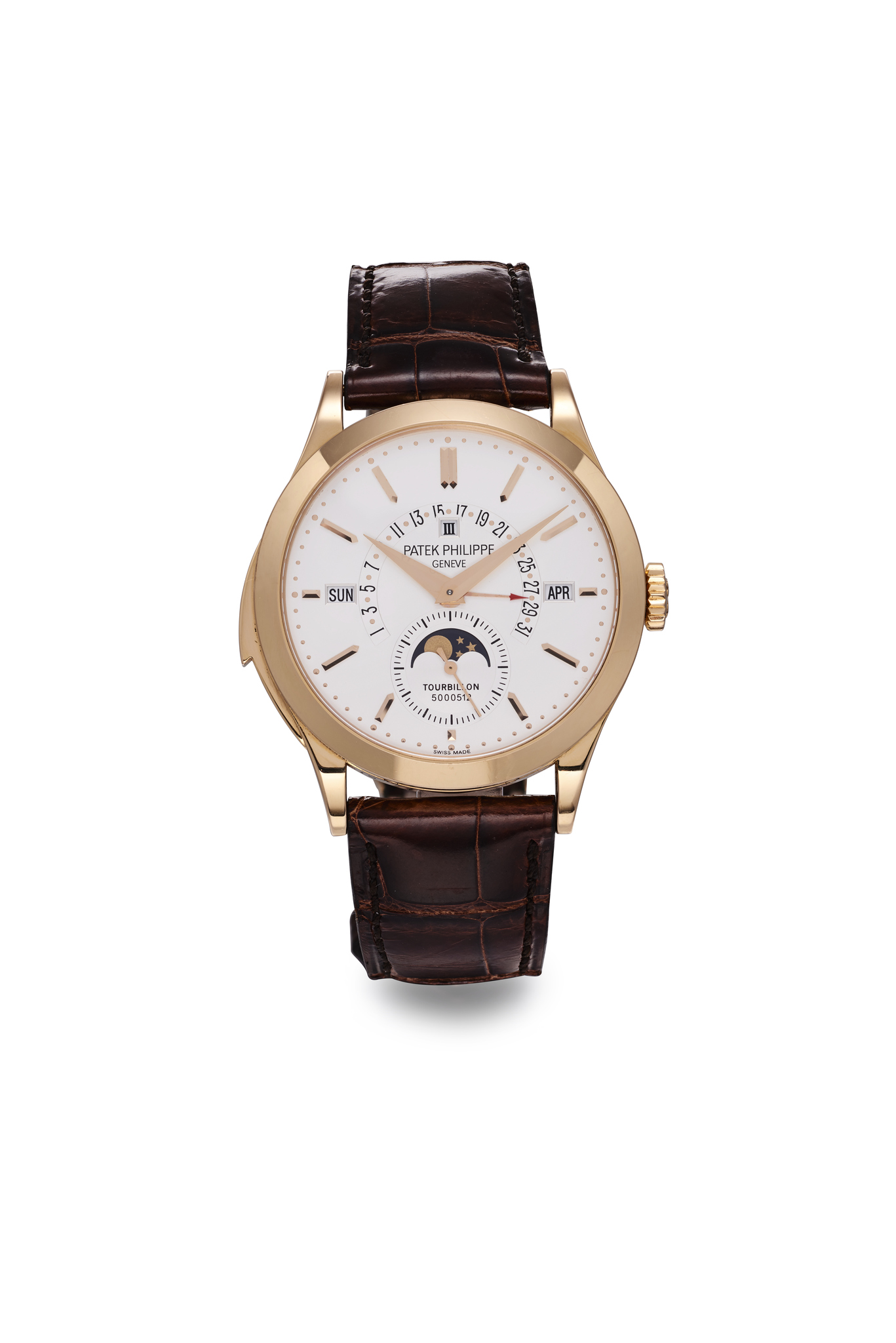 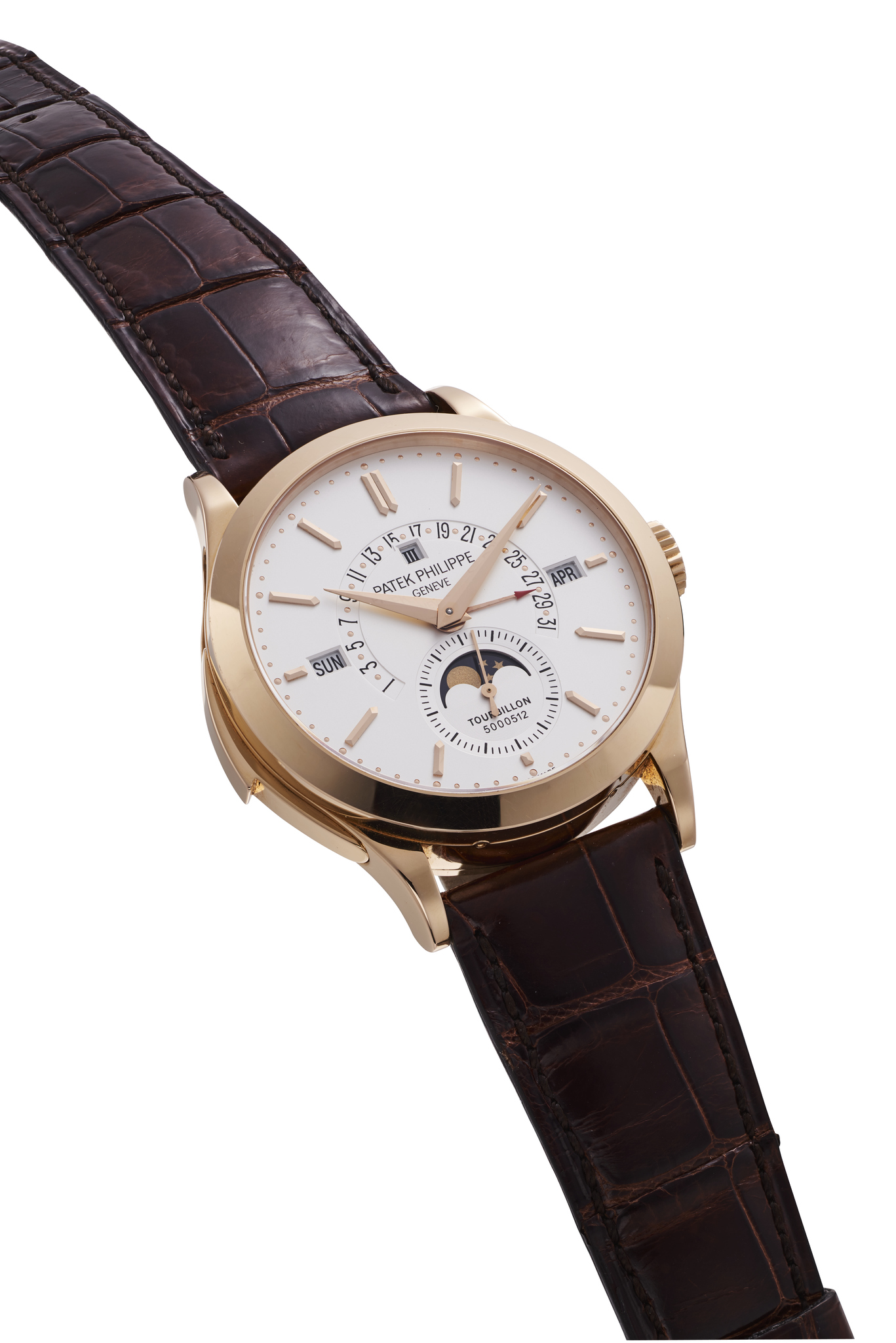 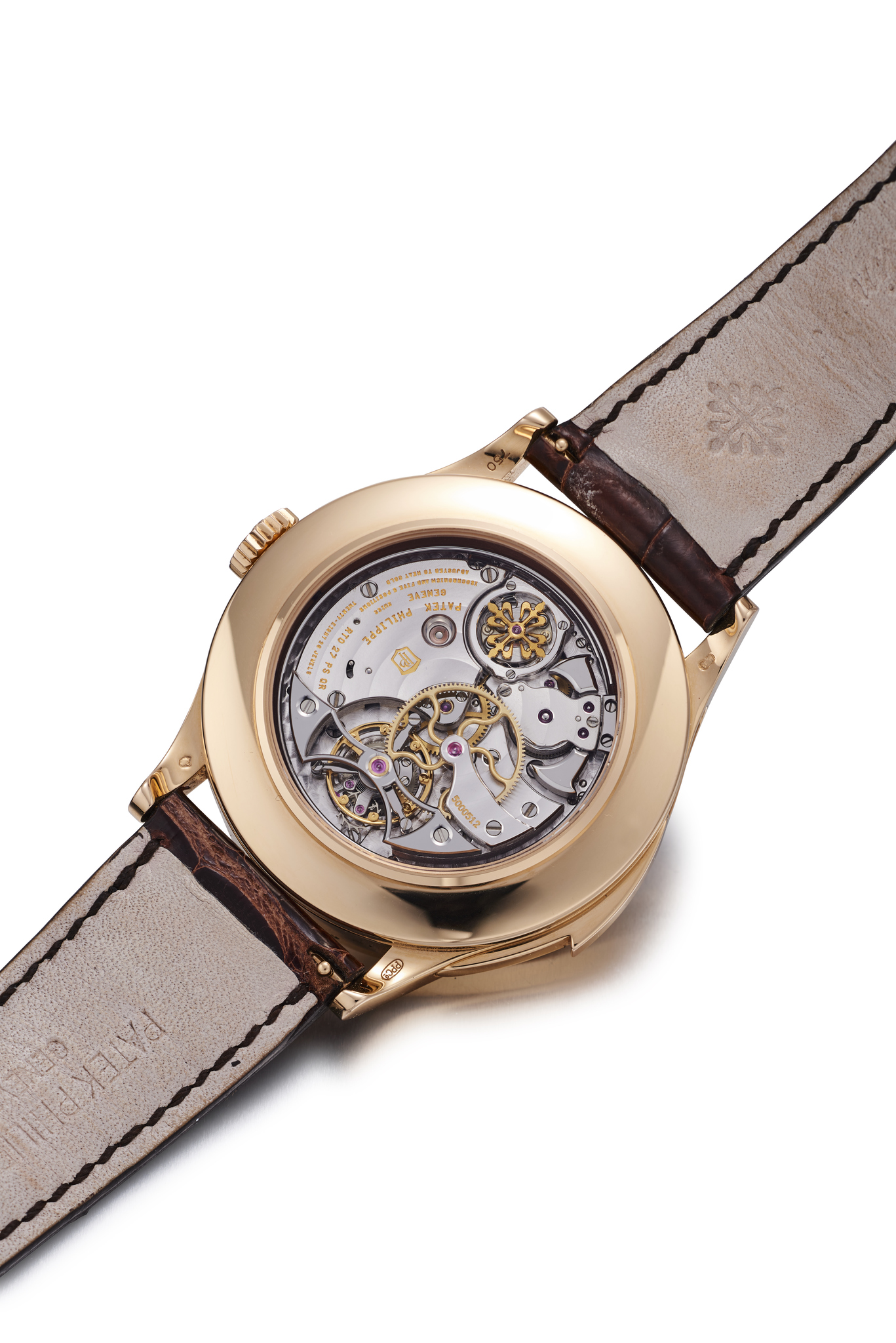 18K pink gold, manual-winding, round-shaped, gentleman’s wristwatch, sapphire-crystal snap-on case-back, with subsidiary seconds at 6, a one-minute tourbillon regulator and seven horological complications: - Minute-repeater on two steel gongs (activated by the slide at 9 o’clock) - Half-instantaneous perpetual calendar à guichets (with apertures) - Retrograde (fly-back) date of the month (three-quarter circle graduation in the centre) - Day of the week (aperture at 9 o’clock; indications given in English) - Month of the year (aperture at 3 o’clock; indications given in English) - Four-year cycle of leap-years (aperture at 12 o’clock) - Phases of the moon (aperture at 6 o’clock) Opaline silvered dial set with gold sword-shaped indexes. The Extract from the Archives, dated March 12, 2019, mentioned that this watch was sold on July 4, 2011. Patek Philippe, Reference 5216 This reference is launched in 2011 (presented during Baselworld) and remained in production until circa 2011. It’s part of the “Grand Complication” collection. Its’ a wristwatch with minute-repeater, tourbillon regulator, perpetual calendar with retrograde date, leap-year indicator and moon phases, fitted with the calibre R TO 27 PS QR LU. This watch follows in the footsteps of the Ref. 5016 that was launched in 1993 and in the past 18 years has been greatly admired. Until the Sky Moon Tourbillon was introduced in 2001, the Ref. 5016 was the Patek Philippe’s most complicated wristwatch. This model was wanted by Philippe Stern in the late 1980s, at the time of the 150th anniversary of the manufacture, event marked by the creation of “Calibre 89”, the most complicated watch in the world. The Ref. 5016 was a wristwatch of a new type, the most complicated ever, having with its one-minute tourbillon regulator no previous antecedent. In 2011, the new Reference 5216 occupies rank 4 in this category, behind the “Sky Moon Tourbillon” Ref. 5002, the new “Triple Complication” Ref. 5208 and the Ref. 5207, first presented in 2008. In 2017, Patek Philippe has redesigned this famous “Grand Complication”, under the Reference 5316. It sports a new platinum case with a two-tier bezel and lugs as well as a black enamel dial with an aperture for the enamel lunar disk. The retrograde date is indicated by an unusual hand with a diamond-shaped tip. As can be seen by looking at the three models, the diameter of the case has been increased each time. On the one hand, it meets the expectations of the market. On the other hand, it allows this amplifies the chime and enhances sonority and fullness of the tone. To sum up: - Reference 5016 (Ø 36.8 mm.), launched in 1993, produced in platinum, 18K white, pink and yellow gold; the watches featured silvered or black dials with numerals matching the case. We can think that approximately 200 examples were manufactured until production ended in 2011. One stainless steel version, Ref. 5016 A, was especially made in 2015 for the caritative auction Only Watch (sold for the amount of CHF 7 300 000.-). • Reference 5216 (Ø 39.5 mm.), launched in 2011, first produced in pink gold and later in platinum. We can deduce that approximately 200 examples were manufactured until today. Just like Ref. 5016, the Ref. 5216 is one of the “must” of any wristwatch collection. The readability of its dial is remarkable thanks to the presentation by apertures (“à guichets”) of its perpetual calendar with indication of the leap year and its retrograde date.