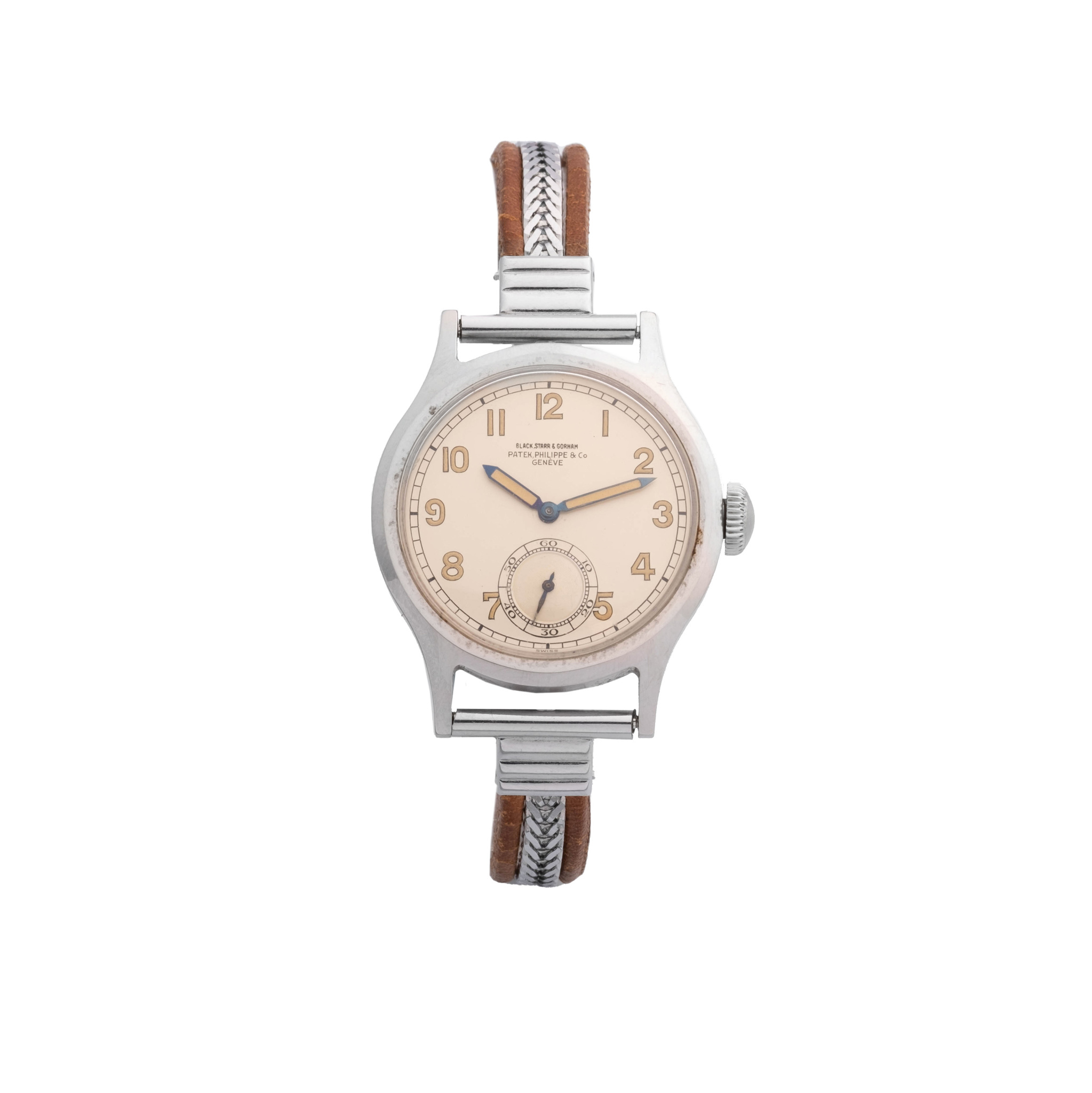 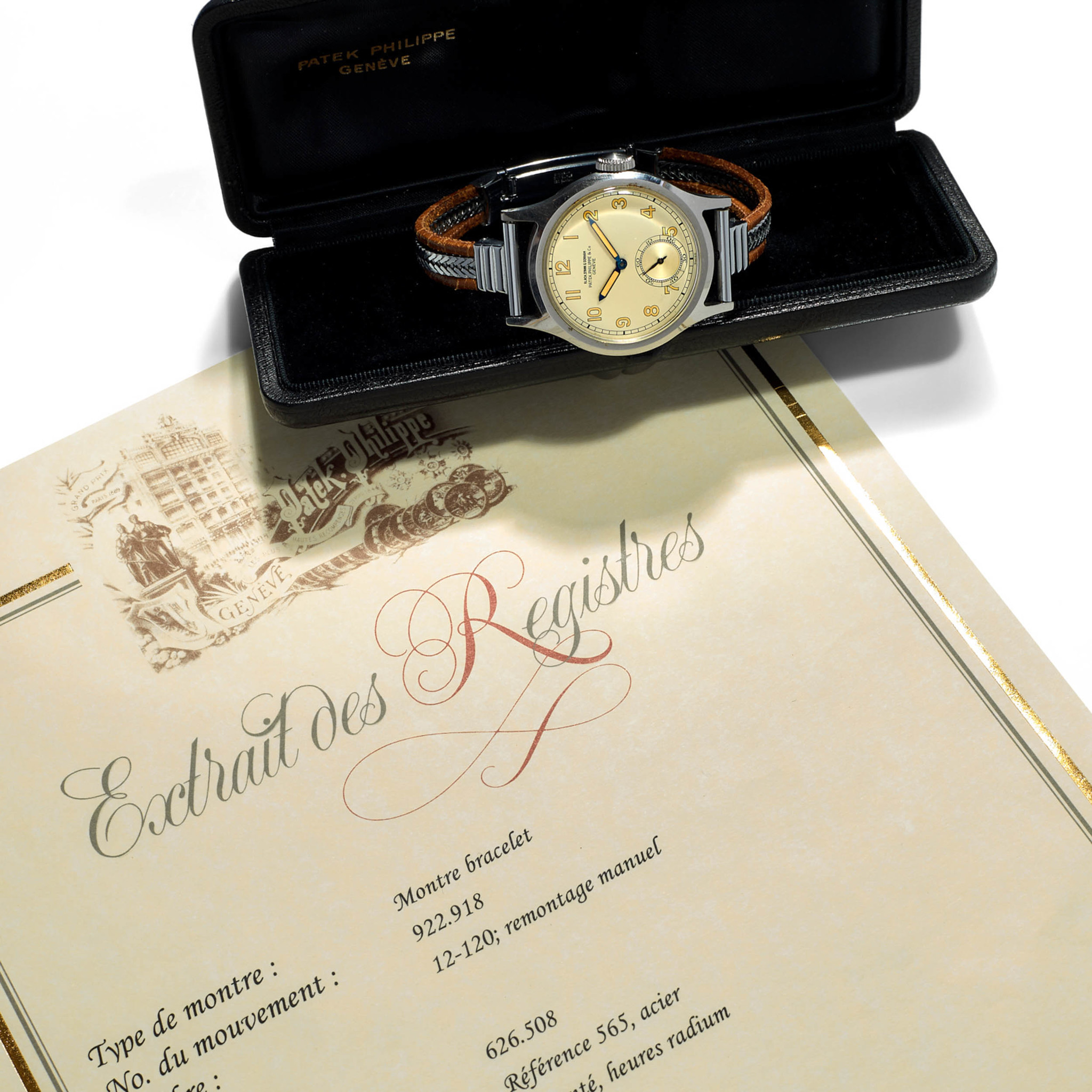 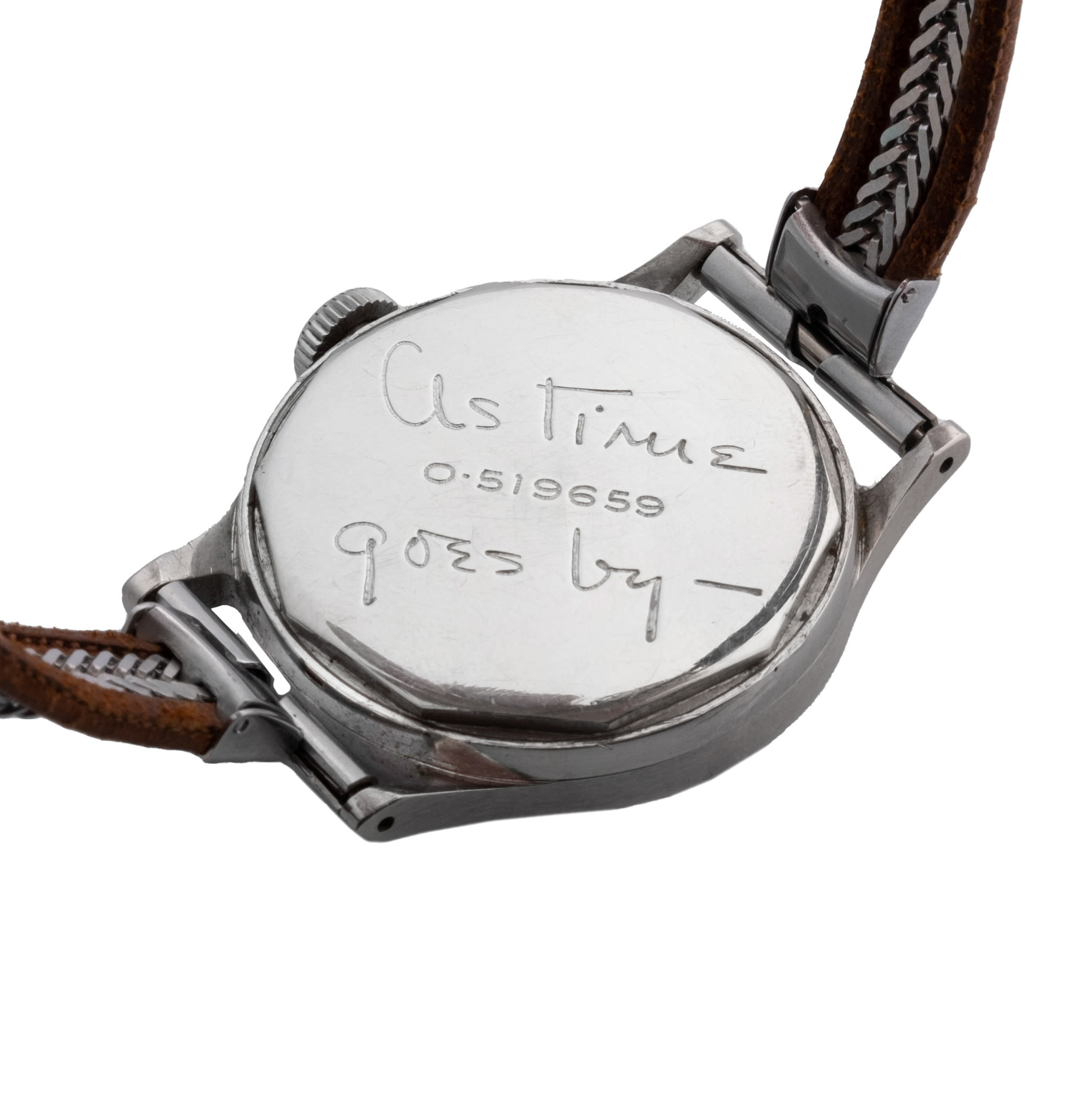 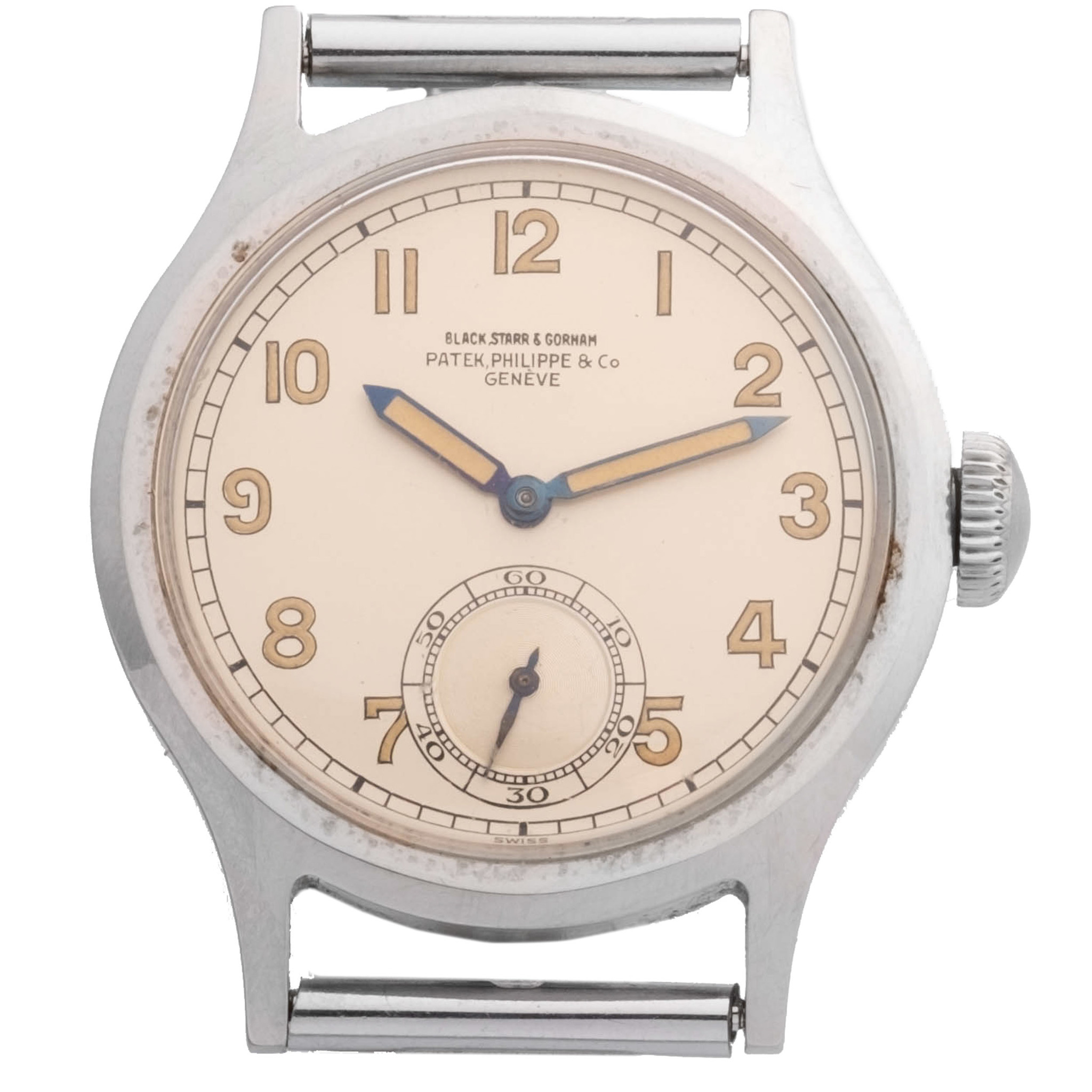 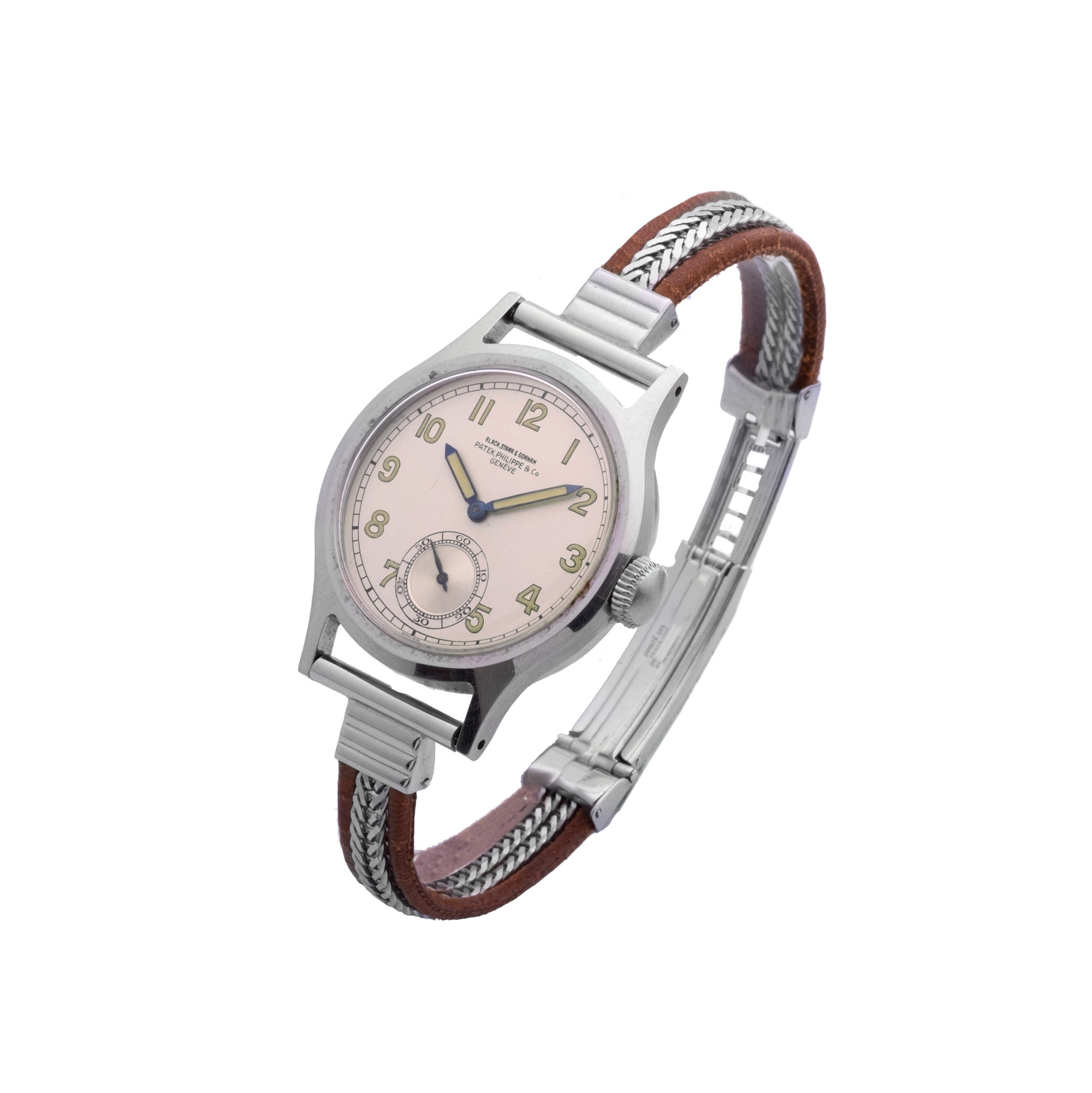 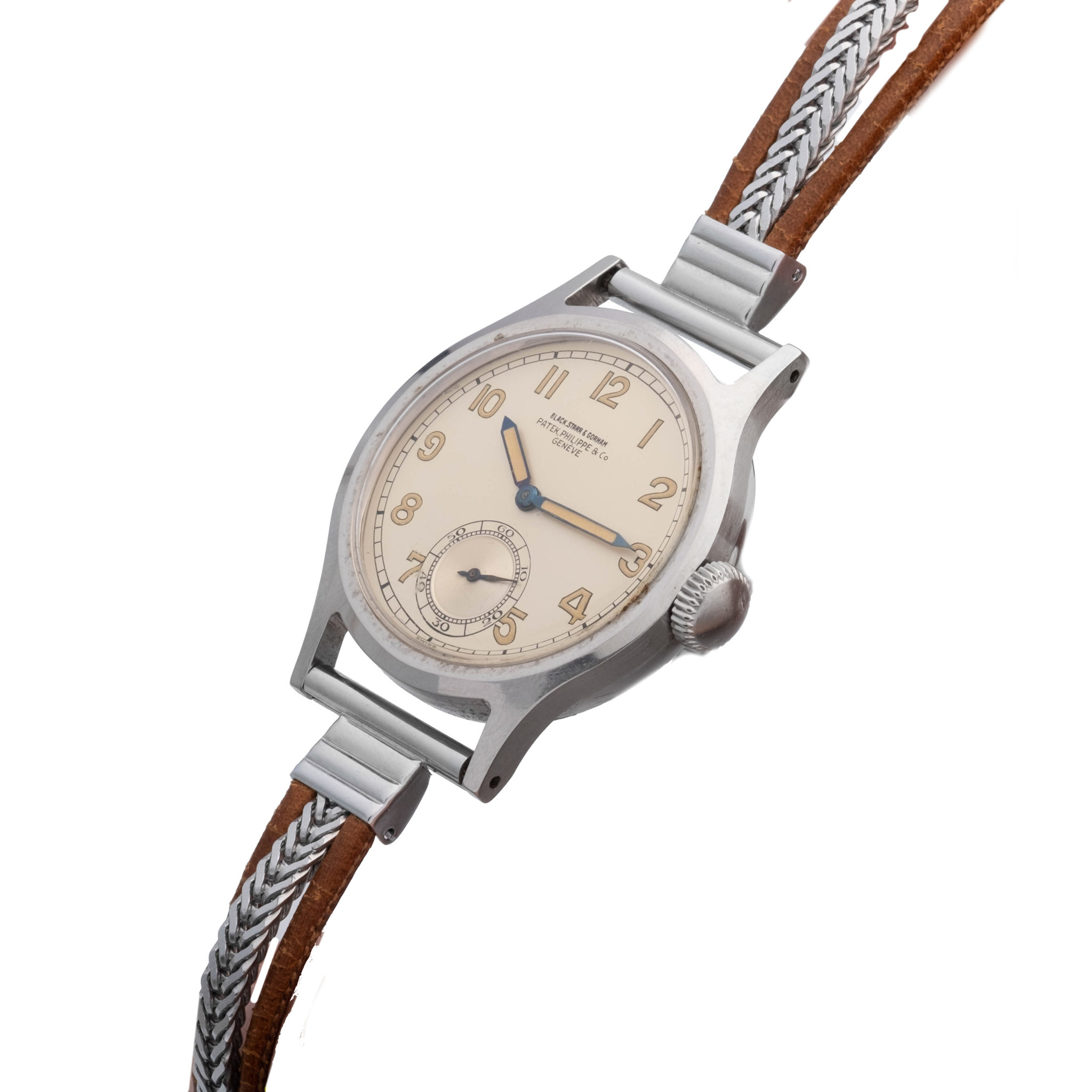 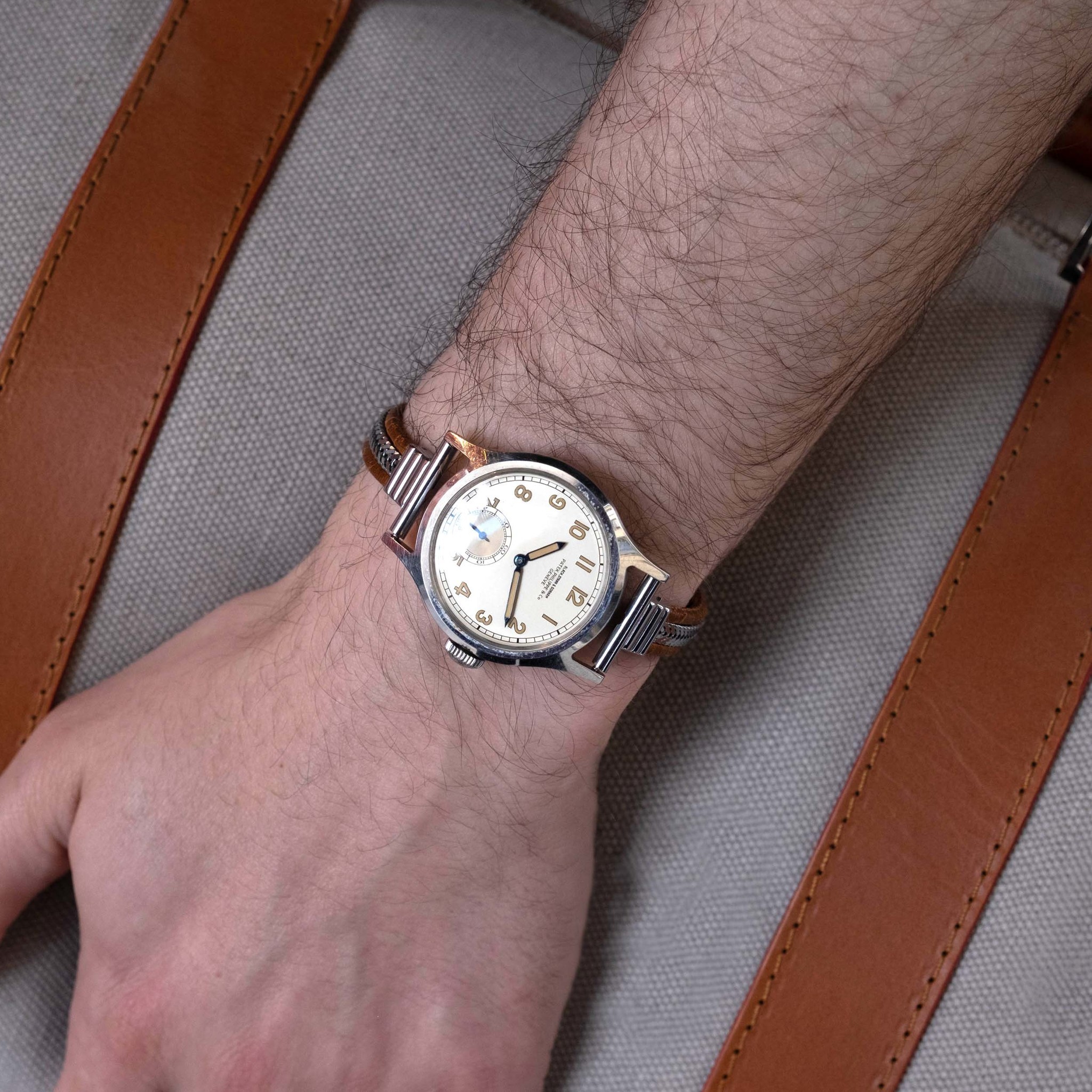 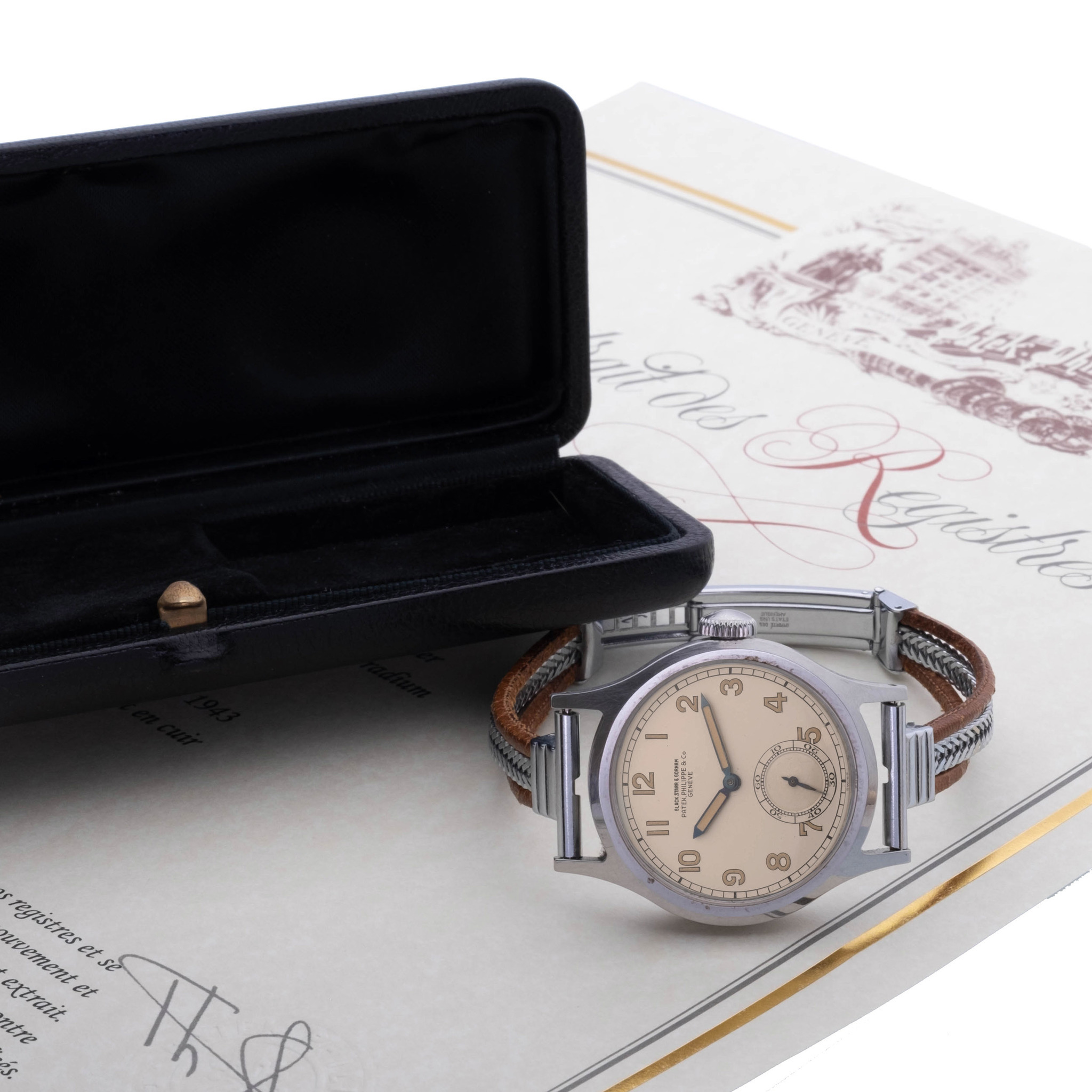 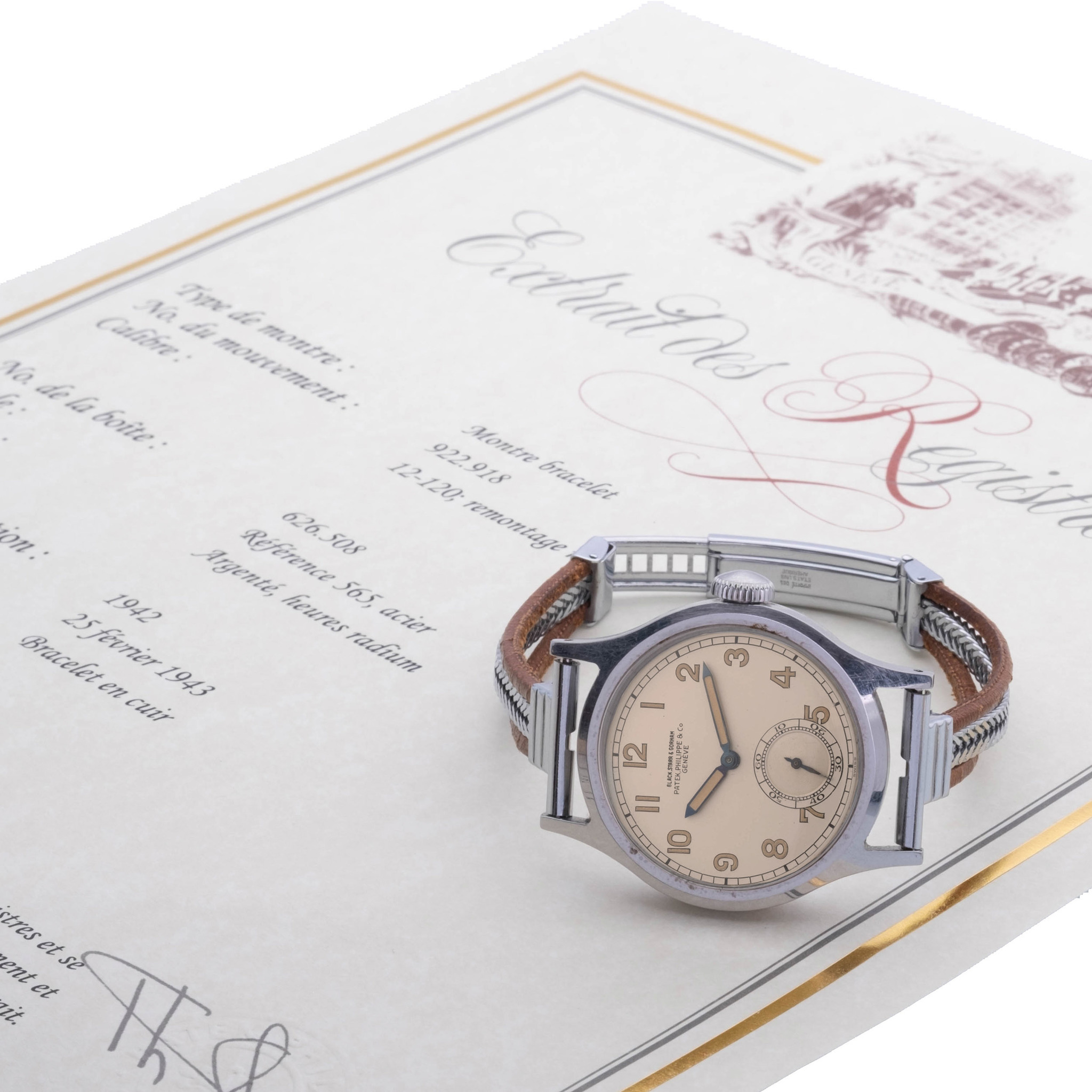 Bracelet very rare and probably unique leather band with inside a stainless steel semi-rigide bracelet, from the same period of the watch.

Patek Philippe, Ref. 565
Such watch as the one we are presenting are embodying perfectly the Generation’s campaign motto: “You never actually own a Patek Philippe. You merely look after it for the next generation”.
Introduced in 1932, with the Ref. 96, the “Calatrava” is probably one of the most iconic classic watch model in the history of horology.
The Ref. 565 was produced from 1938 to 1952, in stainless steel, pink gold and yellow gold. According to the Extract from the Archives this lot dates back to 1943. Intended to be sportier, the reference 565 combined an elegant design to technical innovations to support outdoor activities: luminous hands and numerals, a screw down case-back and an inner soft iron case serving to shield the movement from the adverse effects of magnetic field. Usually, the Ref. 565 features applied steel indexes, but to find one with painted radium Arabic numeral is extremely rare.
The watch is made more unique with the rare retailer signature, Black, Starr & Gorham a famous American jewellery company founded in 1810, in New York city, by Isaac Marquand. Black, Starr & Gorham is the oldest continuously operating jewellery firm in the United States and was the first retailer on Fifth Avenue in New York. It is so iconic, even Marylin Monroe immortalised the name in “Diamonds are a girl’s best friend” along with Tiffany, Cartier and Harry Winston. Black, Starr & Frost considers itself as the oldest America’s watchmaker. Among its prestigious clients you will find all the American tycoons of the 1920s and 1950s: Rockefellers, Vanderbilts Carnegies, Guggenheim and Hollywood stars, such as Elizabeth Taylor.
--

During this temporary name switch in the 1940s, the company retailed Patek Philippe watches such as the one we are presenting.

As Time Goes By

The phrase engraved on the case-back of this watch – As Time / 0.519659 / Goes By – probably refers to the well-known American song of the same name in the 1940s, while the number mentioned may refer to a musical note.

The film Casablanca revived the song in 1942, using it as the theme for the film. Dooley Wilson (1886-1953) sang this version but it was not released as a single until June 1946 due to a musicians’ strike at the time of the film’s release. It was therefore a reissue by Rudy Vallée, released in 1931, that was sold instead.

The song has remained famous to this day due to the success of the film, which was recognised as the third greatest American film by the American Film Institute in its Top 100 published in 2007.

At the funeral of Ingrid Bergman (1915-1982), the film’s star actress – who had become the world’s most desired and highest paid star in the 1940s – a violin played the melody.

The expression “Play it again, Sam” refers to this song and to a scene in the film in which Humphrey Bogart (1899-1957) appears.

You must remember this
A kiss is just a kiss, a sigh is just a sigh.
The fundamental things apply
As time goes by.