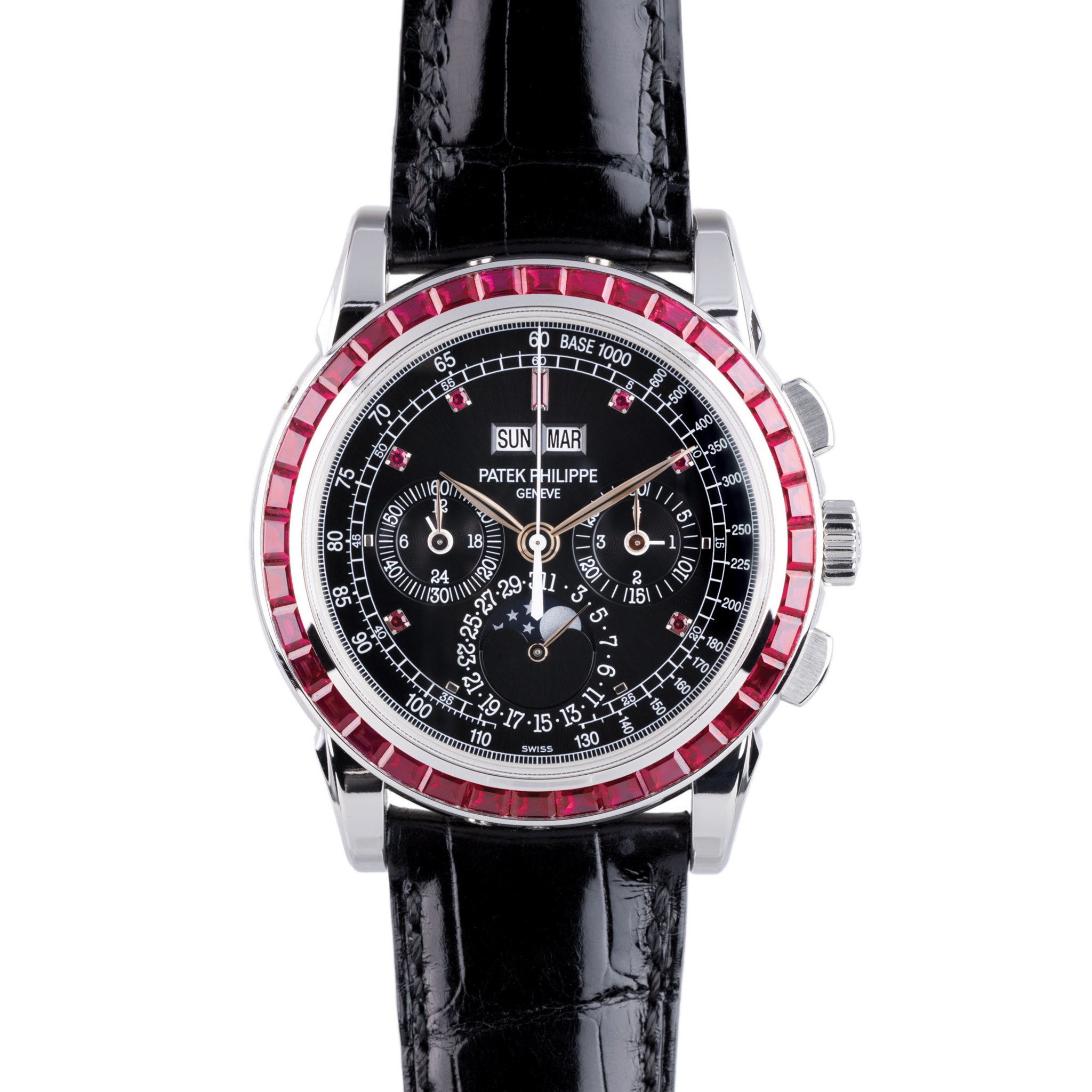 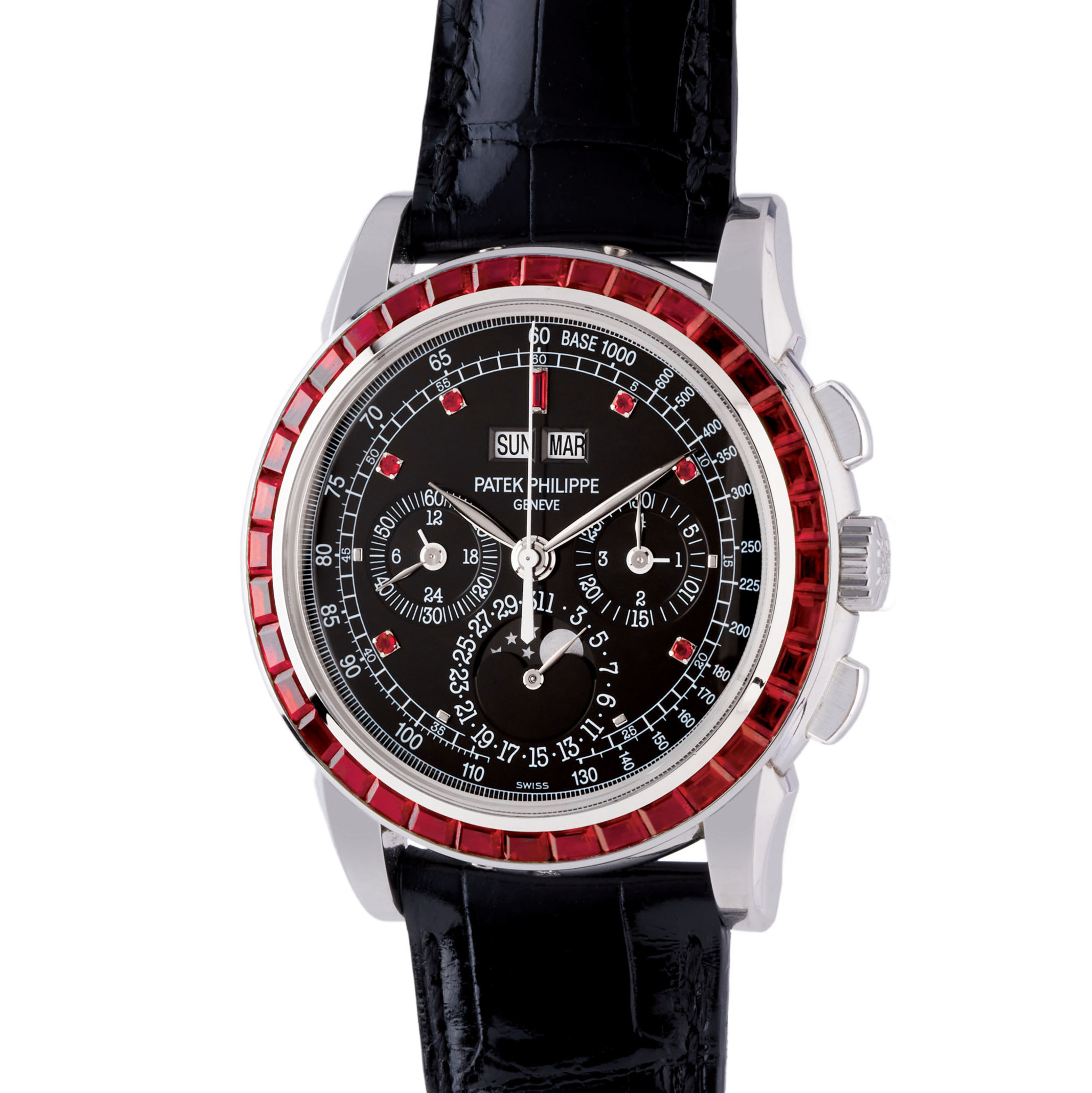 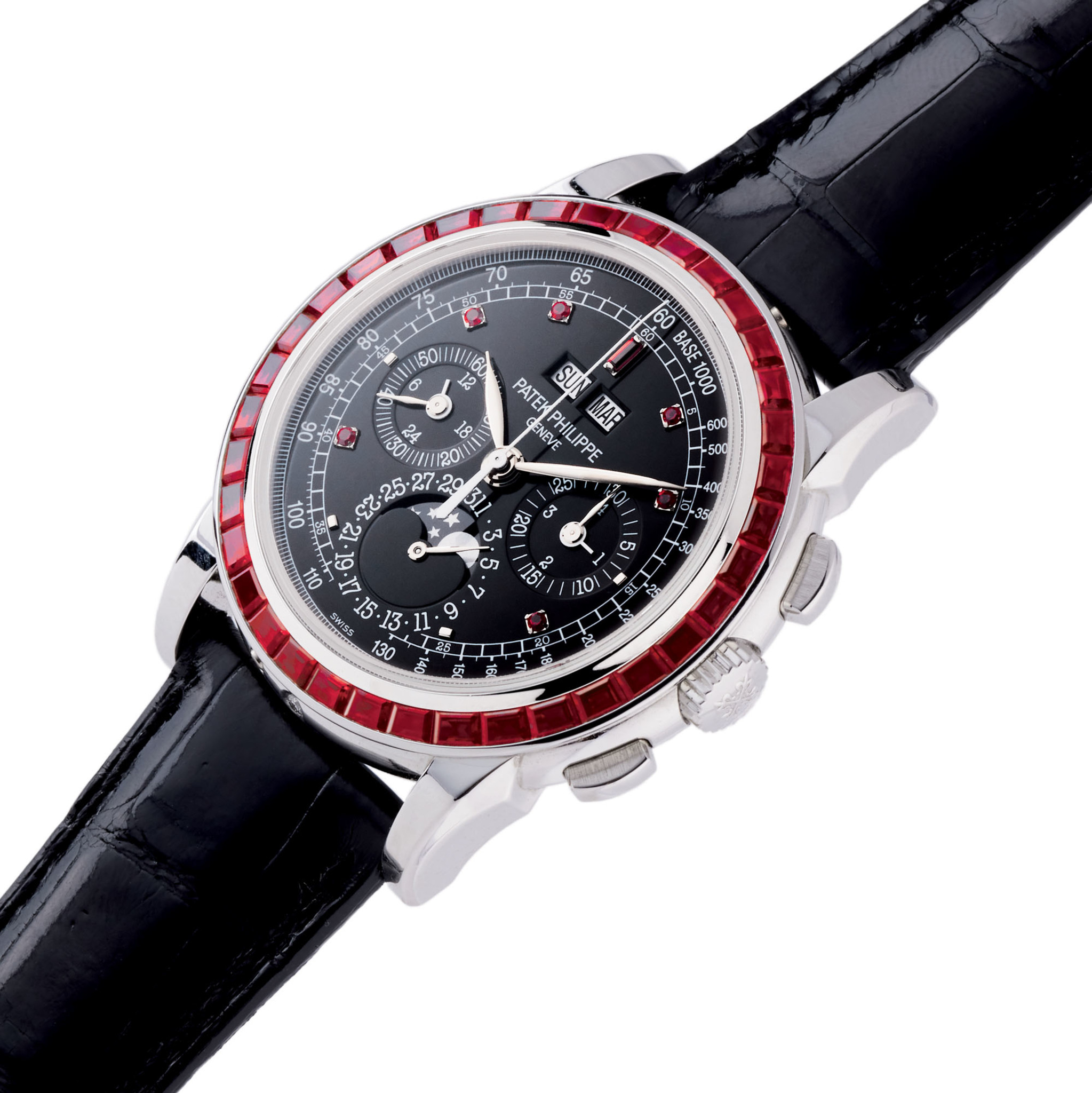 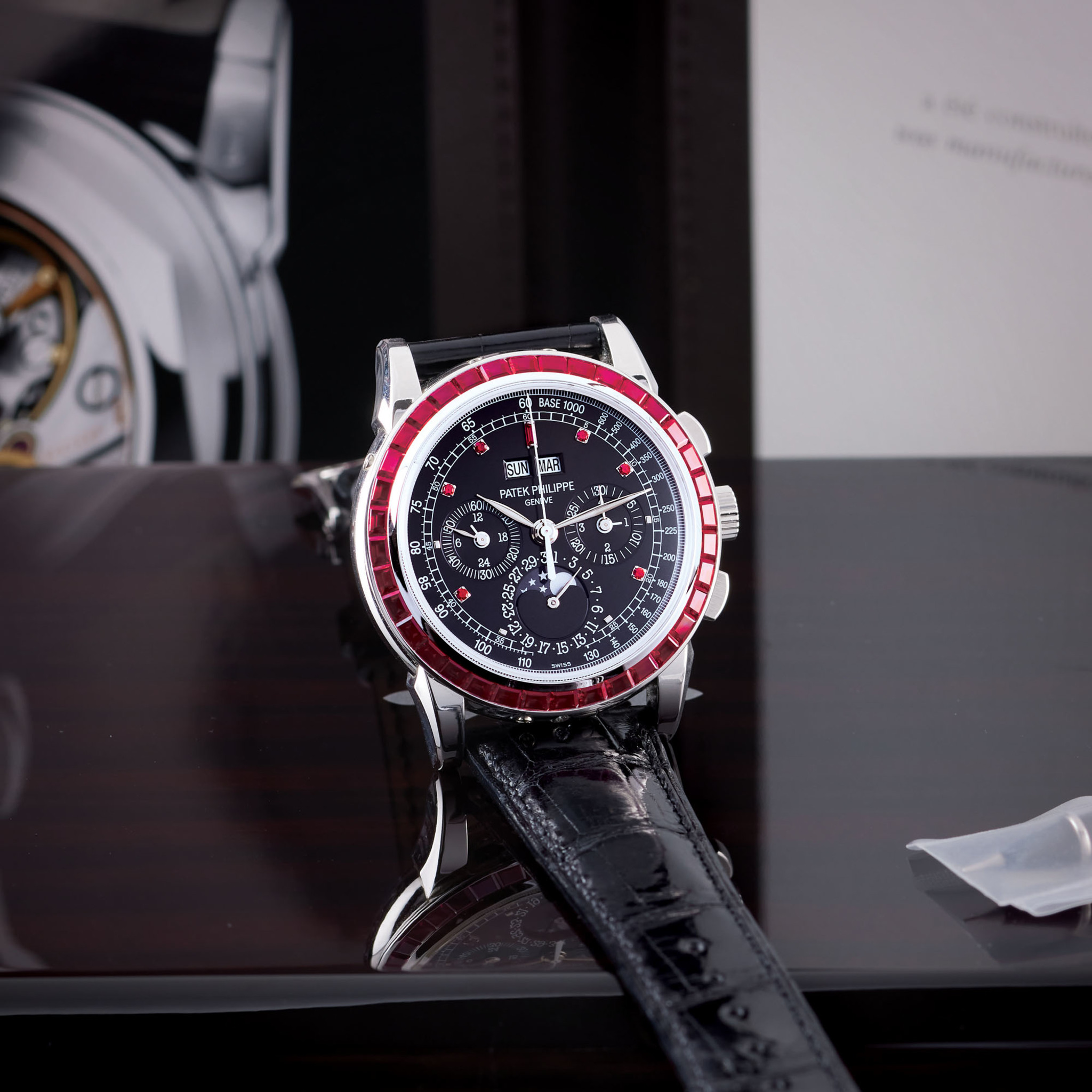 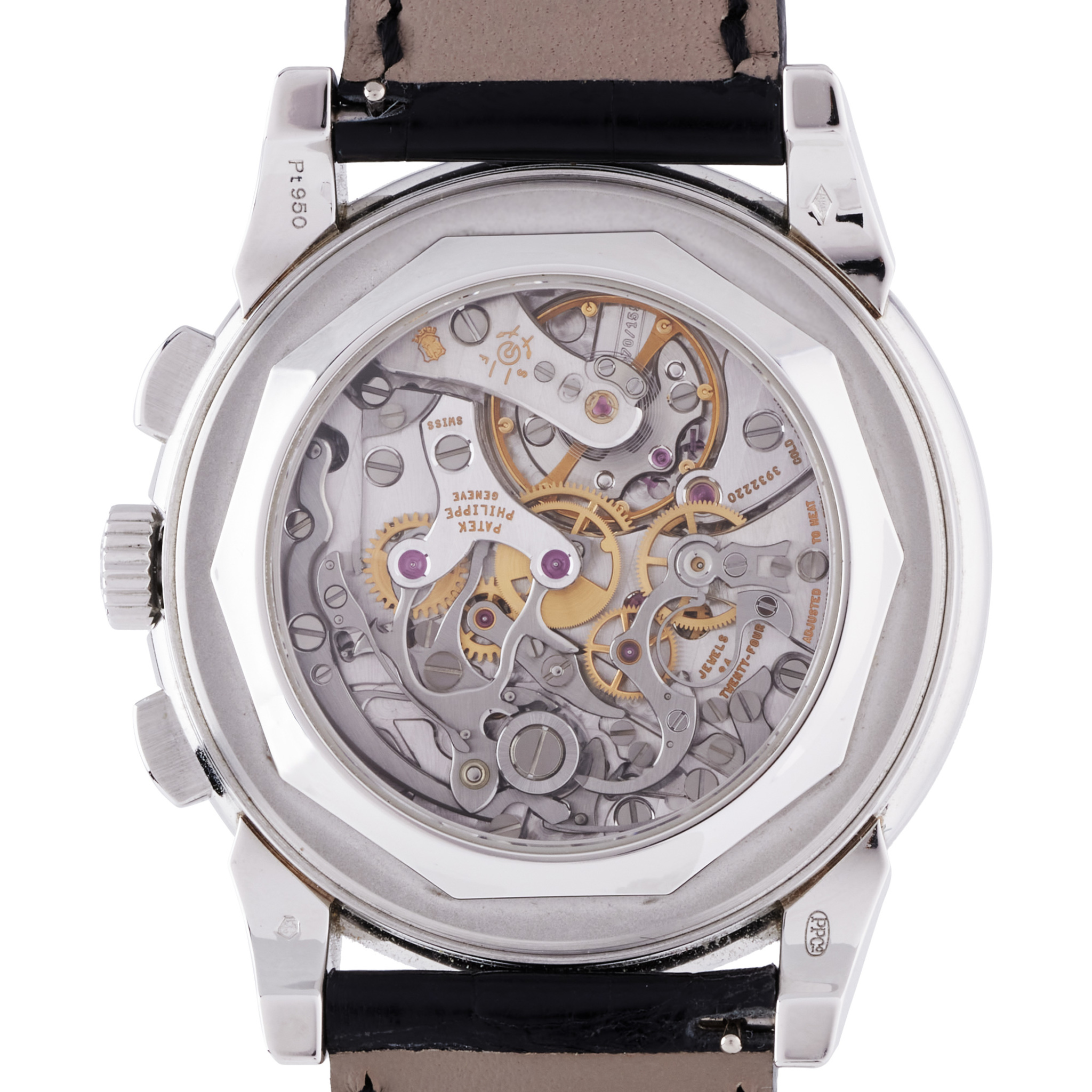 One of the very few examples of the platinum Ref. 5971 with gem set bezel, the so-called “Ring of colours”

The Ref. 5970 – a wrist-chronograph with perpetual calendar – represents a “Must” in the production of the Genevan manufacture. It all started in the 1940’s with the launch of Ref. 1518, which will be followed in the 1950’s by Ref. 2499, then in the 1980’s by the Ref. 3970. If these models are now highly coveted by amateurs, it is due to the fact that a¾er the Second World War, Patek Philippe was the only watchmaker in the world to be able to produce in series this kind of parts, certainly in a few examples each year but of a remarkable quality of execution.

The Ref. 5970 was launched in 2004 and was produced until 2011. It remains today a very popular model among collectors. The Ref. 5971 was launched in 2007, with a platinum case, a bezel set with 36 baguette diamonds (around 4 carats) and a black lacquered dial. It remains available in the product catalogue for just three years. It can therefore be reasonably assumed that the number of examples sold should not exceed one hundred units.

In addition to these few dozen pieces that can be described as “series”, the Genevan manufacture has produced for some of its most important customers versions whose bezels are set with sapphires, rubies or emeralds, instead of diamonds.

These rare models are today nicknamed by collectors: “Ring of Colours”.

It is also said that some watches are also known to have gemstones on the lugs in addition to the bezel and dial. There are even lacquered dials in colours other than black, … a royal blue has already been spotted!

The fact remains that Ref. 5971 is already a rare watch in its “classic” diamond version, but to have the opportunity to acquire a version with a “ring of colours” is quite exceptional.