A very fine and rare, self-winding, platinum, astronomical wristwatch with sky chart, phases and orbit of the moon including time of meridian passage of Sirius and of the moon and outer date ring. 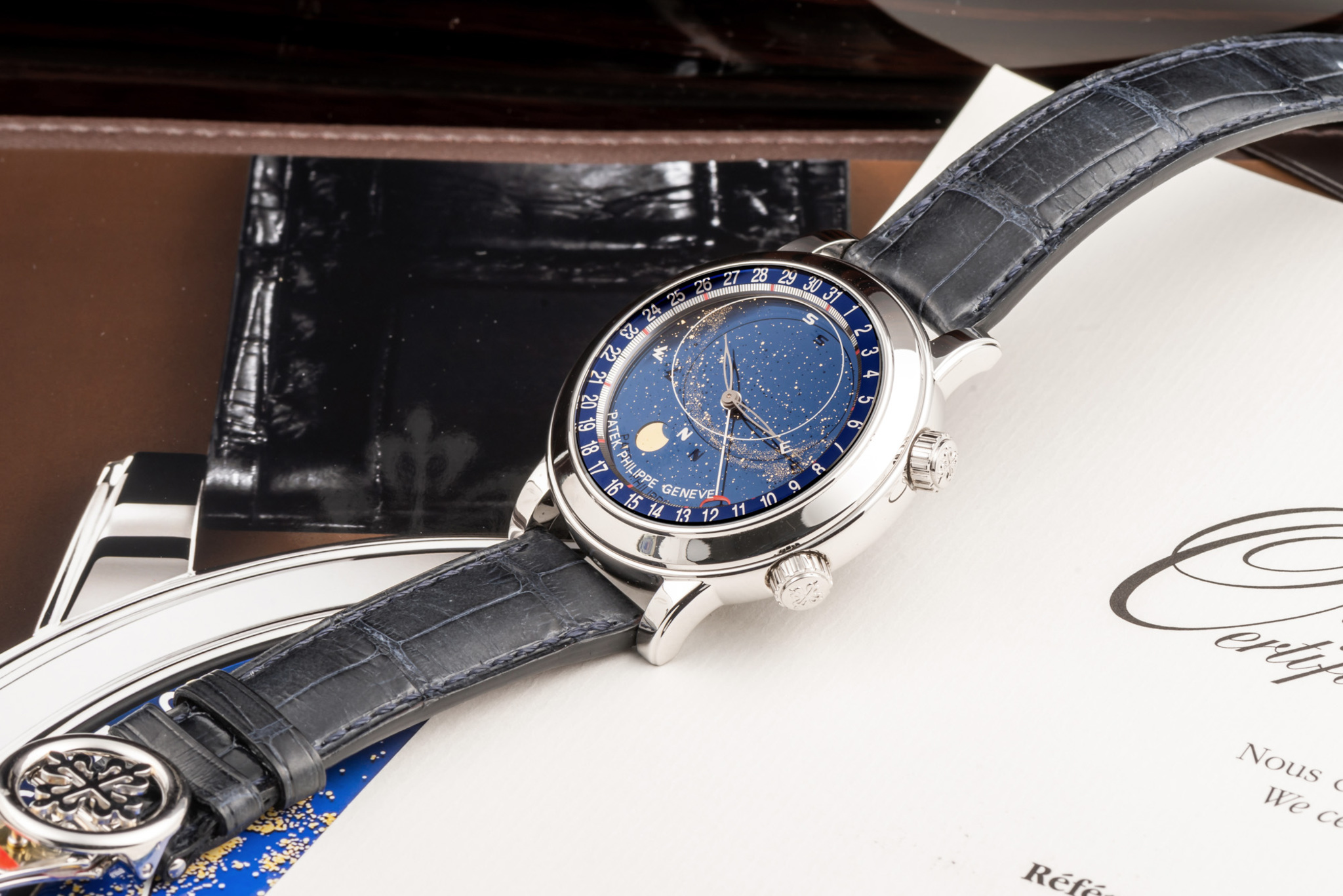 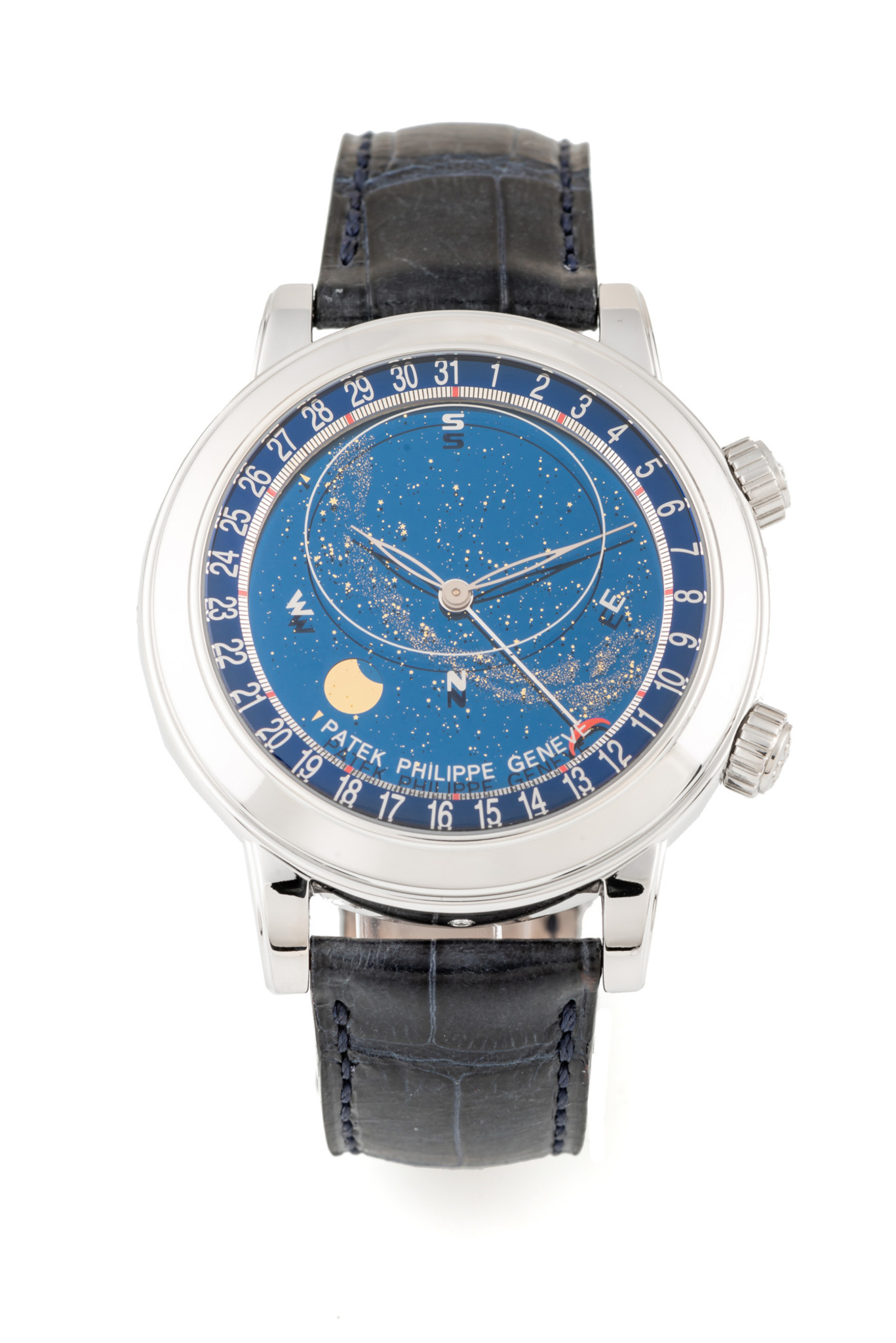 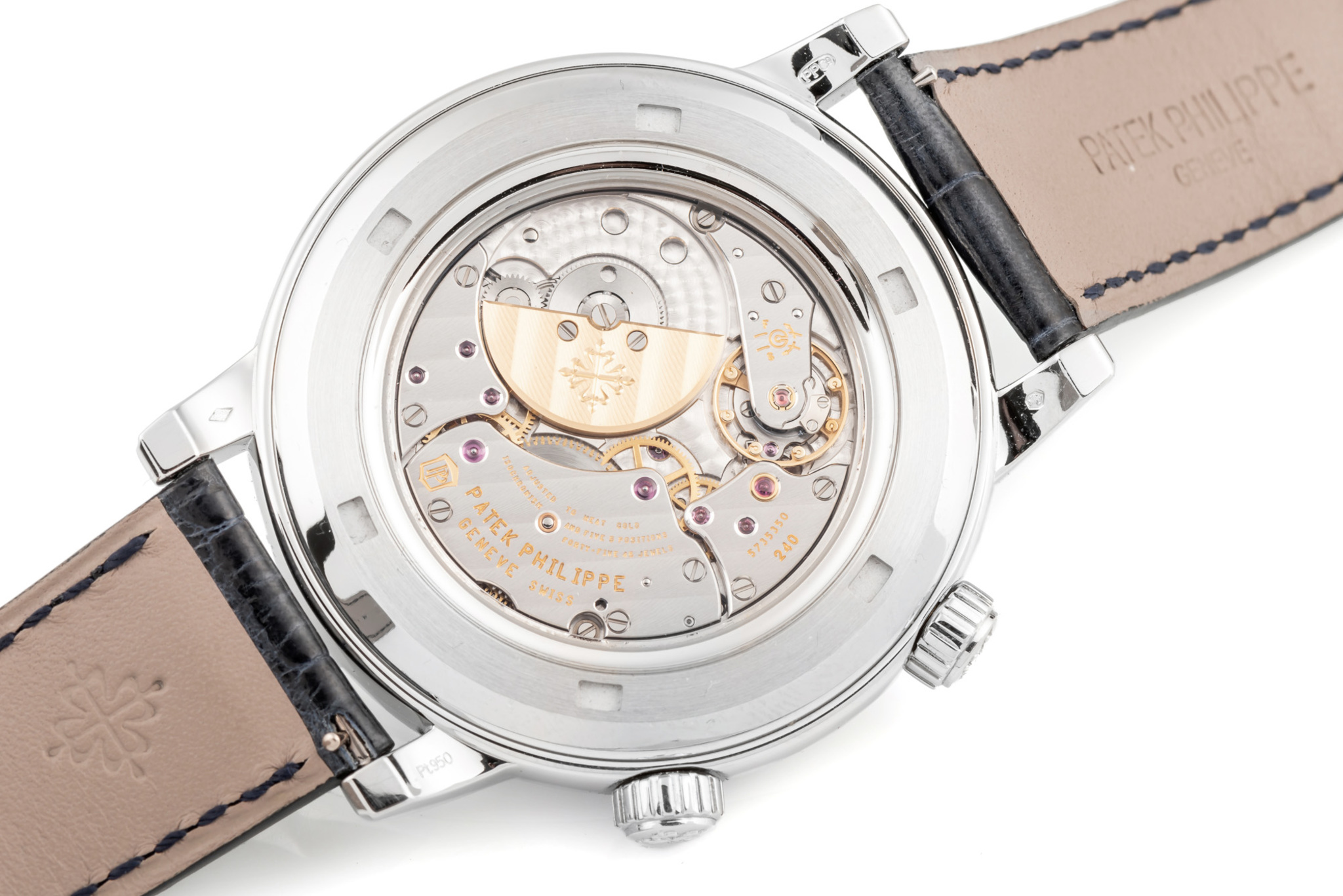 Patek Philippe, Reference 5102, “Celestial” The “Celestial” model was introduced at the 2002 Basel Fair, under the Ref. 5102. Two years earlier, the “Star Caliber 2000” had made headlines as one of the most complicated pocket watches ever produced, featuring exact configurations of the nocturnal skies with its star movements, moon position and moon phases. This watch followed famous earlier supercomplicated Patek Philippe watches such as the “Packard” (1924), the “Graves Super-Complication” (1933) and the “Calibre 89” (1989). In April 2001 Patek Philippe had unveiled the “Sky Moon Tourbillon”, a “Grand Complication” wristwatch that displayed celestial motions with incredible accuracy. Benefiting from Patek’s experience in astronomy, mathematics and microengineering, the watch incorporated further miniaturised astronomical functions, combining them with a tourbillon regulator and a minute-repeater with long circumference “cathedral” gongs utilising a special steel alloy. The “Celestial” wristwatch displays the night sky of the Northern Hemisphere by utilizing 3 superimposed sapphire disks, which rotate at different speeds in order to show the angular motions of the stars and the moon as well as the moon phase progressions. The disks are covered by the front sapphire crystal with its inner ellipse, framing the visible portion of the skies above Geneva. The rotation speed of each disk required a particular transmission ratio to assure the greatest accuracy of the astronomic indications. Patek Philippe calculated 25 trillion ratio combinations to attain the highest degree of accuracy. The disks move as follows: A counter-clockwise turn of the sky disc equals 23 hours, 56 minutes and 4,09892 seconds (sidereal day) and indicates the meridian passage of Sirius and the star positions. A counter-clockwise revolution of the moon disc equals 24 hours, 50 minutes and 28,328 seconds (lunar day) and indicates the meridian passage and angular motion of the moon. A clockwise half-turn of the moon phase equals 29 days, 12 hours, 44 minutes and 2,82 seconds, and indicates one full lunation. The “Celestial” movement consists of 301 hand-finished parts; all steel parts are beveled and polished. Production tolerances are extremely small; the teeth of every gear wheel are manually polished with a rotating hardwood disc. This not only creates a beautiful, perfectly smooth surface, it also reduces friction at critical points of contact, thus assuring precise indications and extended longevity of the watch. It takes several months to assemble a “Celestial” wristwatch and quantities are very limited due to the lengthy processes of assemblage and regulation. It is an utmost pleasure to wear this divinely complicated and precise miniature cosmos on the wrist. In 2012, Patek Philippe introduced in the market its new “Celestial”, under the Ref. 6102, with a new style case and an additional date function.