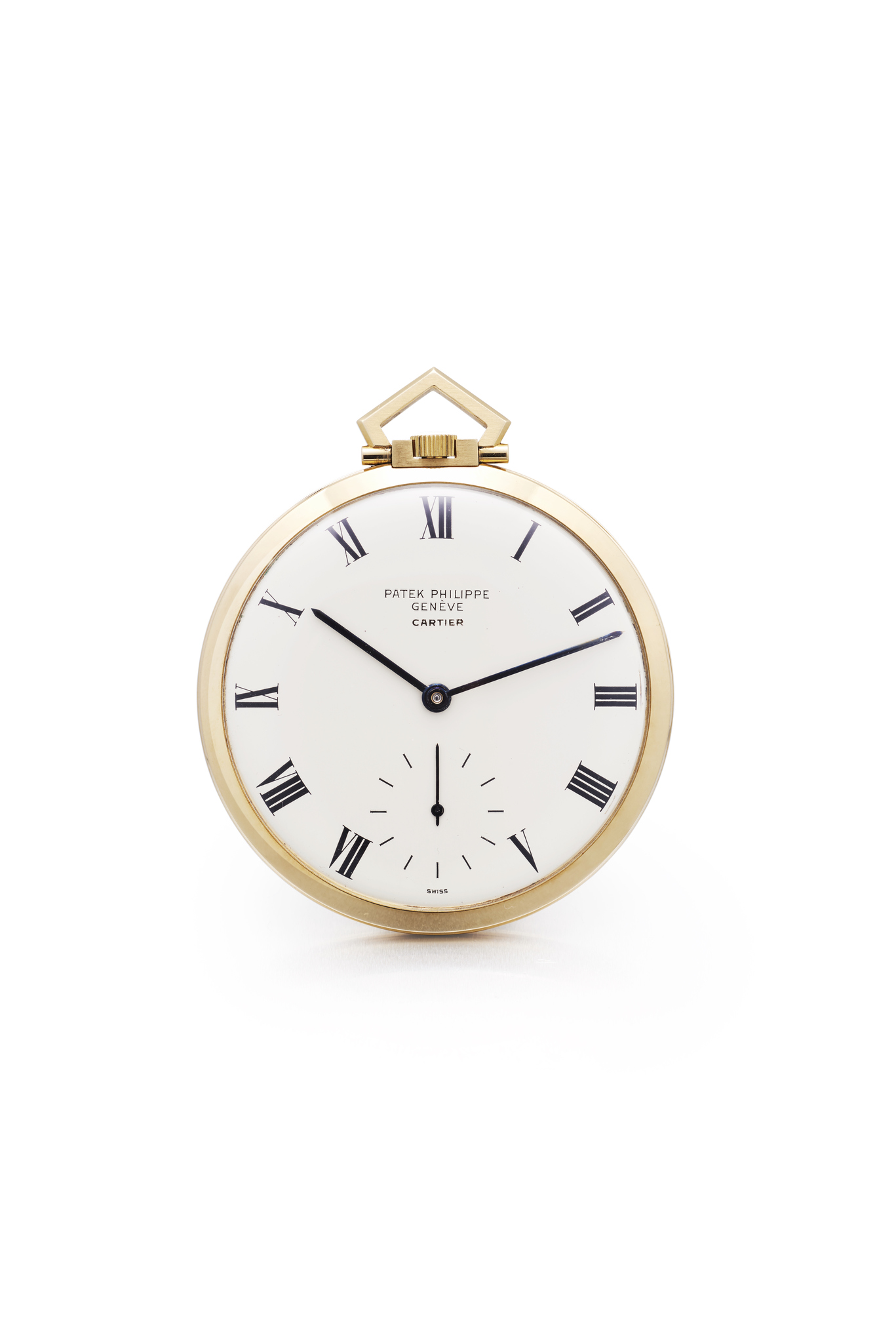 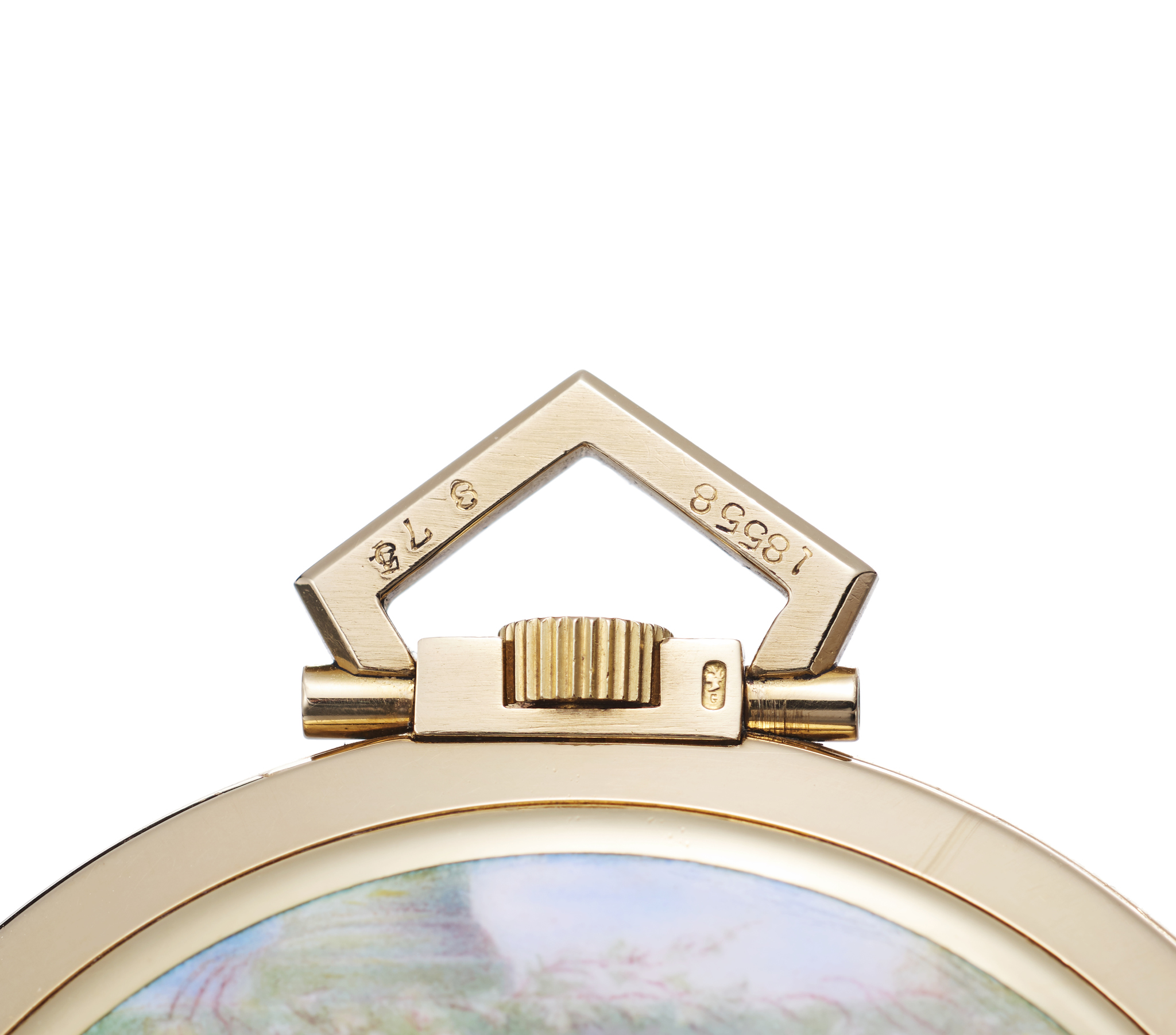 The Extract from the Archives, dated March 12, 2019, mentioned that this watch was sold on June 18, 1969; in fact, delivered to Cartier who will punch on the case his inventory number. Since 1968, Patek Philippe collaborated with Geneva’s master enamellers to create pocket watches ornamented with painting on enamel on gold, which copying the old master paintings; these unique piece all very sought after by the collectors. According to the research, the present pocket watch is possibility the FIRST SERIES PIECE UNIQUE made by Patek Philippe and retailed to Cartier (June 18, 1969). The Patek Philippe Museum, Geneva, kept in this collection only one watch made the same year by F. Pellarin-Leroy (“Master Charles William Lambton” after Sir Thomas Lawrence (1769-1830); Inv. P-131). The enamel miniature by J. Pellarin-Leroy is extremely well executed in beautiful pastel shades. Along with Marthe Bischoff (1900-1991), Hélène-May Mercier (1910-1996), Nelly Richard (1910-1998) and Suzanne Rohr (born in 1939), Pellarin-Leroy was one of the finest enamellists working for Patek Philippe since the late 1960’s. It was also one of the artists that were entrusted to make the enamel panels for the solar dome clocks. It is interesting that the case backs of the unique enamel watches by Patek Philippe are of very heavy- gauge gold. This is to provide a very solid base for the enamel during the several firings required at very high temperatures, the thickness of the gold reduced the incidences of damage occurring during firing as the gold was less likely to warp than gold of thinner gauge. The thicker gold back also eliminates the need for counter-enamel on the interior. The Pellarin-Leroy’s works for Patek Philippe • No. 893 232, case No. 429 755, Ref. 715 / 1, the Three Musicians, after a painting attributed to the Master of the Female half-lengths (Flanders, 16th c.). Antiquorum, Geneva, auction, November 12, 2017, lot 463, for the amount of CHF 185 000.- • Unrecorded numbers, Près de Rome (Near Rome). Christie’s, Hong Kong, auction, November 26, 2014, lot 2 646, sold for the amount of HK$ 2 320 00.- • No. 892 657, case No. 432 821, Ref. 715 / 5, portrait of General Gilbert du Motier, Marquis de Lafayette (1757-1834) in 1792, after a painting (1834) of Joseph-Désiré Court (1797-1865). Antiquorum, Geneva, auction, May, 13, 2012, lot 463, for the amount of CHF 134 500.- The Portrait of Count Stanislas Potocki It’s a 1781 equestrian portrait of the Polish patron, politician, writer and Prime Minister of Poland Stanis?aw Kostka Potocki (1742-1821), by the French painter Jacques-Louis David (1748-1825). It was painted in Rome when the artist and subject met during David’s stay at the Villa Medici after winning the first prize for painting in the Prix de Rome. Its equestrian format is owed to influences from Peter Paul Rubens (1577-1640). Potocki, the subject of the painting, displayed it at Wilanów Palace (pa?ac w Wilanowie), his residence near Warsaw. Ownership passed to the Branicki family in 1892. During the World War II it was looted by the German forces, then passed into Soviet Russian hands after the war, before being repatried to Poland in 1956. It is now on show in the Museum of King John III’s Palace at Wilanów (Muzeum Pa?acu Króla Jana III w Wilanowie). Stanislas Count Potocki (1742-1821) Stanis?aw Kostka, Count Potocki, was born in 1742 in Lubin and died in 1821 in Wilanów. He married Alexandra, Princess Lubomirski. Count Potocki held the knighthood of the White Eagle and Saint Stanislas Merits and was Great Master of the Polish Freemasons, he was also Nuncio of the Diet in 1776, 1786 and 1788. He left Poland after its dismemberment in 1793, was arrested in Carlsbad at the uprising of Kosciuszko, lived in captivity for eight months in Josephstadt and when the Great Duchy of Warsaw was created, he became the Senator Palatine, Head of the Council of State and of the Council of Ministers. Napoleon nominated him Minister of Culture and Education. Potocki kept these portfolios even after the Polish Kingdom had been annexed by Russia in 1815. He founded the University of Warsaw in 1816 and was elected President of the Senate in 1818. He sacrificed his entire fortune to promote literature, sciences and arts, and personally built up a beautiful collection of paintings, Etruscan vases and engravings in his Wilanów castle, near Warsaw. He was the author of many works, such as “Of Eloquence and Style” in 4 volumes, published in Warsaw, 1815; “Journey to Ciemnogrod”, a satirical novel in 4 volumes and a Polish translation of the great works of Winckelman on Antique Arts. Jacques-Louis David (1748-1825) painted this equestrian portrait of him which is considered as one of the masterpieces by the artist.