THE SEASONS Piguet & Capt, Geneva, the box by Rémond & Cie, the painting on enamel attributed to Jean-Louis Richter, circa 1810. Extremely fine and rare 18K gold and enamel snuff-box with automaton scene and a built-in watch, made for the Chinese market.

Rectangular-shaped with rounded corners; the hinged enamelled panels of the lids respectively painted in colours with an allegory of the Seasons; on the top panel (two-thirds of the object hiding the tobacco compartment), the figure of the Spring with its new fruits and flowers (left side) and the figure of the Summer with its sheaves of freshly cut wheat (right side), on the low left side panel disclosing the automaton scene, the figure of the Autumn with its grapes emerging from a cornucopia, and, on the low right side panel disclosing the dials of the watch, the figure of the Winter under the image of an old man wearing a brazier; on the lower part of the top panel - so in the centre of the object once all the lids are closed -, an allegory of the Sun represented by a mask surrounded by a garland of flowers in chiselled gold on a royal blue enamel background with flinqué and champlevé decoration; the automaton scene is made of chased varicoloured gold elements on a painted enamel landscape background with two cupids (amorini) at a forge and a windmill with rotating sails beyond; the base of the box consists of a translucent enamelled panel of royal blue colour on a guilloché background of geometric patterns, in a frame of white, blue and black champlevé enamel of a frieze with palmettes; the sides of the box is made of panels decorated en suite, with alternating small panels accented with paillons and at the corners of four panels, each with an urn. White enamel with black painting Breguet numerals and subsidiary seconds at noon; on the dial-plate, the two separate dials are entwined with champlevé decoration of foliage on a blue enamelled background. Blued steel ''spade'' hands. 27 x 12,- mm. rectangular-shaped, gilt brass full plate with cylindrical pillars, fixed barrel, cylinder escapement, brass escape wheel, gilt brass three-arm balance, flat balance spring and steel end- piece. Automata driven by independent trains, by means of cams and levers, 28x 13,- mm. rectangular-shaped, gilt brass, fixed barrel, six- wheel train, last pinion on eccentric bushing to regulate the speed. Jean-Georges Rémond & Cie (active between 1783 and 1815-1820). 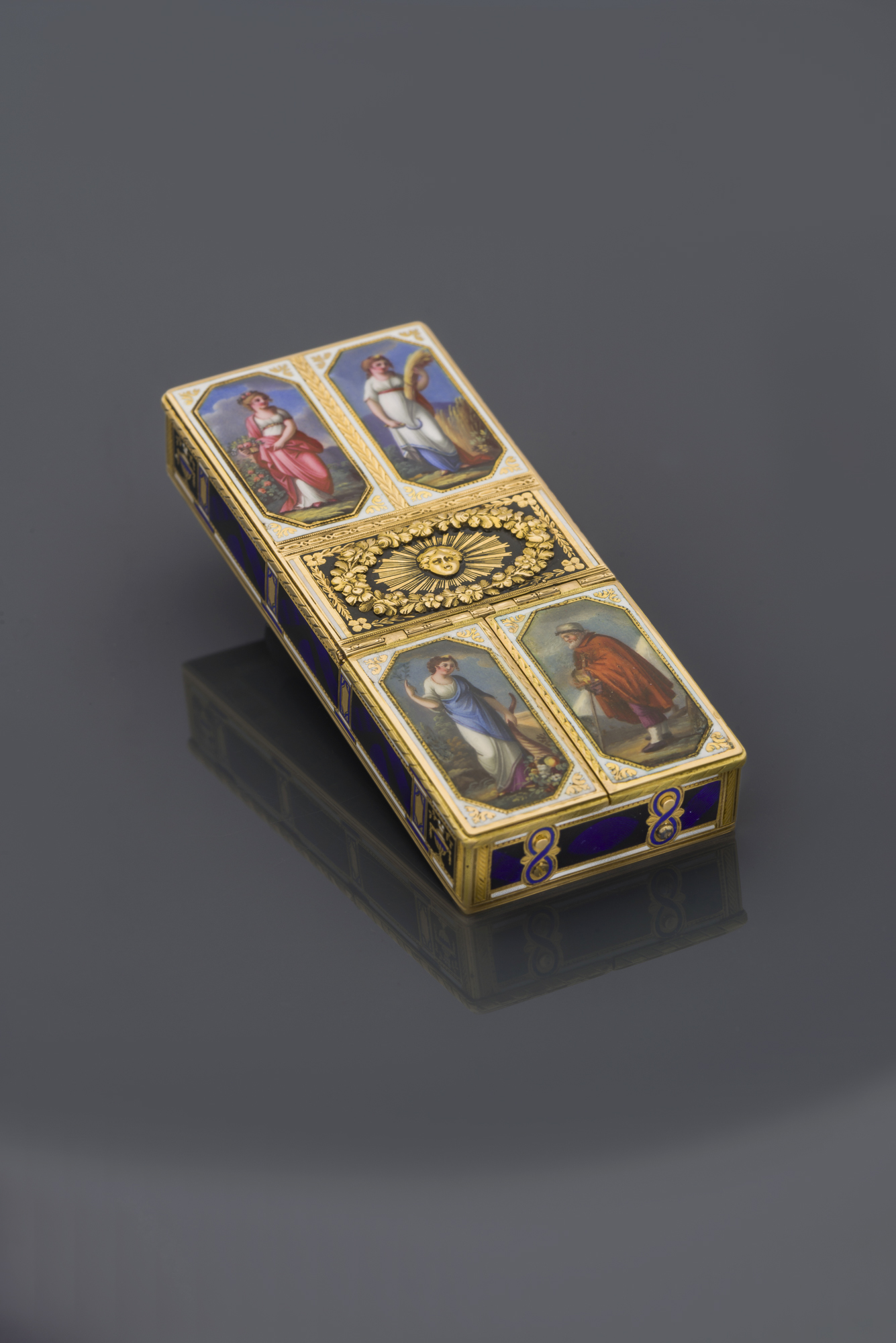 DIM. 84 x 35 x 13 mm. The box stamped R&C. Provenance Christie's, London (Great Britain), auction, November 21, 1971 The second snuff-box of this pair made for the Chinese market is published by Le Corbeiller, Clare, European and American Snuff Boxes, 1730-1830, London, 1966, No. 333. Similar objects Geneva, Patek Philippe Museum (Inv. S-413 a+b ; Inv. S-519 ; Inv. S-684). Piguet & Capt (active between 1802 and 1811) Specialised in the production of complicated watches, musical and/or automaton scenes incorporated into watches, snuff-boxes or objects. Among the first in Geneva to use the musical mechanism with pinned cylinder and tuned teeth comb. From Ventôse 16, An X (March 7, 1802), to 1811, Henry-Daniel Capt (1773-1841) formed a partnership with Isaac-Daniel Piguet (1775-1841), who was from the same village - Le Chenit - as he in the Vallée de Joux. Their signature was Piguet & Capt. In 1811, when Piguet broke off to join Philippe-Samuel Meylan (1772-1845) in a new partnership, Henry-Daniel Capt continued to work on his own until, in 1830, he went into partnership with Aubert and Son, Place Bel-Air. Their signature was Aubert & Capt. They were among the first Genevan makers to produce watches with chronograph. In 1844, the workshop was at 108, rue Neuve in Geneva. It was then managed by Capt's son, Henry Capt Jr. After a short time it moved to 85, rue de la Fusterie, and in 1851, to 177, rue du Rhône. In 1880, the firm was bought by Gallopin and its name became H. Capt Horloger, Maison Gallopin Successeurs, a trademark registered on November 1, 1880, under the No. 44. This signature was only used for watches retailed in their own store, the watches supplied to other retailers being merely signed Henry Capt. Henry-Daniel Capt, along with Isaac-Daniel Piguet and Philippe-Samuel Meylan, was the foremost maker of small musical automata in the late 18th and early 19th centuries. Most of his work is not signed, although he sometimes scratched his name on his movements. Jean-Louis Richter (1766-1841) Learned his art under David-Etienne Roux and Philippe-Samuel-Théodore Roux, becoming a most renowned enamel painter. His speciality was the painting of landscapes and particularly lake-side scenes and marine-scapes, often representing ships in a harbour or battles with fighting Men-of-War, but, on occasion, also portraits and hunting scenes. He did not often sign his work, but it is clearly recognised as being in his hand from the style and quality of the painting. He applied his art principally to watch cases and snuff-boxes and these were largely destined for the Chinese, Turkish, British and Italian markets. In 1828, he was in partnership with Aimé-Julien Troll (1781-1852) and one can find work signed Richter et Troll. Richter, like other great enamel painters of the time, often found inspiration for his work from paintings or engravings by the artists then in fashion particularly Claude Vernet. Rémond, Mercier, Lamy & Cie (active circa 1810-1815) Georges Reymond was active from 1783 to 1815-1820. Became Master goldsmith on December 22, 1783 and struck his first Master mark. Seven years later he appears to have formed a company: Georges Rémond & Cie, which eventually became, circa 1800, Rémond, Mercier, Lamy & Cie. During the French occupation of Switzerland by Napoléon, J.-G. Rémond recorded marks. In 1792, the partners Joseph Guidon, Jean-Georges Rémond, David Gide, Laurent Guisseling and Jean-Noël Lamy informally began working as Guidon, Rémond, Gide & Cie, (the company was officially registered on January 1, 1796). In 1809, the firm took on the name of Jean-Georges Rémond & Cie, and had offices both in Geneva and Hanau. The partners were Jean-Georges Rémond, Jean-Noël Lamy, Jean Boëhm (domiciled in Hanau), Denis Blondet, Laurent Guiseling, and Daniel Berton. In 1811, J.-G. Rémond, Jean-Noël Lamy, Laurent Guiseling, Pierre Mercier and Daniel Berton formed a company known as Remond, Lamy, Mercier & Cie.