Three-body scallop-shaped, the hinged cover hiding the tobacco compartment with a polychrome painting on enamel showing a magnificent bouquet of flowers framed with a row of half-pearls; the base decorated with a translucent red enamel escutcheon over a guilloché (engine-turned) sunrise design, within a border of champlevé (chased) gold foliage highlighted with blue and turquoise ground; the one-third hinged panel of the back- lid hiding the watch compartment; the sides of the box is made of nine panels decorated en suite. White enamel with black painting radial Roman numerals and subsidiary seconds at three; on the gold dial-plate, the two separate dials are entwined with champlevé (chased) decoration of foliage on a blue enamelled background. Blued steel ''spade'' hands. 58 x 19 mm., one-third of a circle-shaped, gilt brass plate with cylindrical pillars, fixed barrel, cylinder escapement, brass escape wheel, gilt brass three-arm balance, flat balance spring and steel end-piece. Music driven by independent movement, 67 x 48 mm., partly scallop-shaped, brass, fixed barrel with croix-de-Malte, pinned cylinder type with a comb of 14 triple tuned vibrating steel blades (in all, 42 blades), four-arm fly worm-gear governor. Unsigned and unnumbered. The box stamped ''G R'' for Jean-Georges Rémond & Cie (active between 1783 and 1815-1820). 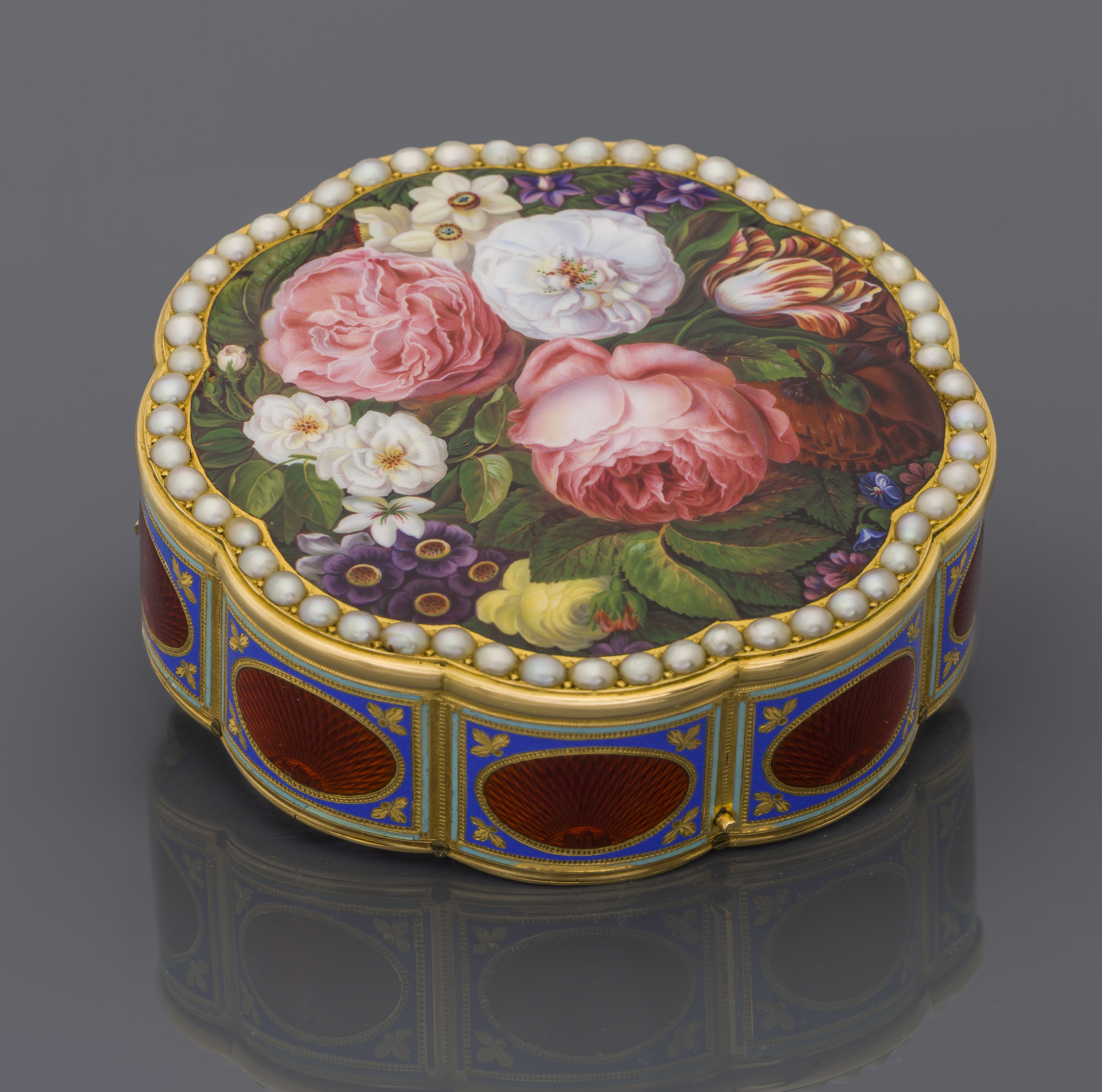 DIM. 74 x 23 mm. In a later fitted leather box stamped "Bulgari / Roma". Provenance Galerie Neumarkt, Zürich (Switzerland), auction, October 8, 1971. In this period, the musical movement can be made in Geneva by François Nicole (1766-1849), who worked with Henry-Daniel Capt (1773-1841), Isaac-Daniel Piguet (1775-1841) and Philippe-Samuel Meylan (1772-1845); all produced such types of musical objects. All came from the same village - Le Chenit - in the Vallée de Joux. The quality of the painting on the top of this box is exceptional. The Genevan enamelers had specialized in flower painting from the 18th century onwards, and in particular used flower ornament for boxes and watch cases intended for the Eastern export markets. Unfortunately, such pieces are not usually signed, so it is not possible to identify the painters. Jean-Geroges Rémond, Geneva Jean-Georges Rémond was active from 1783 to circa 1815-1820. Became Master goldsmith on December 22, 1783 and struck his first Master mark. Seven years later he appears to have formed a company: Georges Rémond & Cie, which eventually became, circa 1800, Rémond, Mercier, Lamy & Cie. During the French occupation of Switzerland by Napoléon, Jean-Georges Rémond recorded marks. In 1792, the partners Joseph Guidon, Jean-Georges Rémond, David Gide, Laurent Guisseling and Jean-Noël Lamy informally began working as Guidon, Rémond, Gide & Cie, (the company was officially registered on January 1, 1796). In 1809, the firm took on the name of Jean-Georges Rémond & Cie, and had offices both in Geneva and Hanau. The partners were Jean-Georges Rémond, Jean-Noël Lamy, Jean Boëhm (domiciled in Hanau), Denis Blondet, Laurent Guiseling, and Daniel Berton. In 1811, Jean-Georges Rémond, Jean-Noël Lamy, Laurent Guiseling, Pierre Mercier and Daniel Berton formed a company known as Rémond, Lamy, Mercier & Cie. Piguet & Meylan (active between 1811 and 1828) Both originally from the village of Le Chenit in the Vallée de Joux, Isaac-Daniel Piguet (1775-1841) and Philippe-Samuel Meylan (1772-1845) came to Geneva as young men, and formed a partnership, which lasted from 1811 to 1828. The company specialised in elaborate and beautifully decorated musical watches, including skeleton and automaton watches, and mechanical animals. The firm was established rue Jean Jacques Rousseau 45 in Geneva. After their association came to an end, both Piguet and Meylan continued for some time to work with their sons. Isaac-Daniel Piguet (1775-1841) Born in 1775 in Le Chenit in the Vallée de Joux. Isaac-Daniel Piguet was the son of Pierre-Moïse Piguet and Elisabeth Nicole. He married Jeanne-Françoise Capt around 1795, and around 1800 settled in Geneva with his family. Isaac-Daniel Piguet went into business with Henry-Daniel Capt (1773-1841), his brother-in-law, on February 10, 1802. The association between Piguet & Meylan came to an end in 1828. Piguet and his son David-Auguste Piguet established a new company, Piguet Père & Fils, located rue Jean-Jacques Rousseau 69. Isaac-Daniel Piguet died in Geneva, on January 20, 1841, at the age of 66. Philippe-Samuel Meylan (1772-1845) Born on February 15, 1772, in Bas-du-Chenit in the Vallée de Joux. At 20 years of age, Philippe- Samuel Meylan came to Geneva where he was a master worker for the Godemar brothers. He met another watchmaker from his native region, Isaac-Daniel Piguet (1775-1841), and they entered into partnership, founding the Piguet & Meylan firm, which was to last from 1811 to 1828. It specialized in minute cadratures, musical watches, skeleton and automaton watches. Meylan is also credited with the invention of the Bagnolet calibre. After Piguet & Meylan was dissolved, he continued to work with his sons François and Auguste. Philippe-Samuel Meylan died in Geneva in 1845. François Nicole (1766-1849) Born on April 1st, 1766, in Le Chenit in the Vallée de Joux. Watchmaker, he left his valley around 1783 and settled first in Nyon (Canton de Vaud), then in 1789 in Geneva where he obtained residence in 1791. ''Citoyen'' (Citizen) in the Registre unique (Unique Register), he is referred to as ''watchmaker- mechanician''. He is the inventor of the étouffoir (damper). It would also be in 1825 at the origin of the introduction of cement in the cylinder of the musical movements. Nicknamed the Michelangelo of the musical boxes, he would have made a total of nearly 440 of which only 40 are still known today. François Nicole died at the age of 83 in Geneva on November 24, 1849. François Nicole is not the founder of the Nicole Frères firm which was illustrated in the middle of the nineteenth century with its chronograph watches.