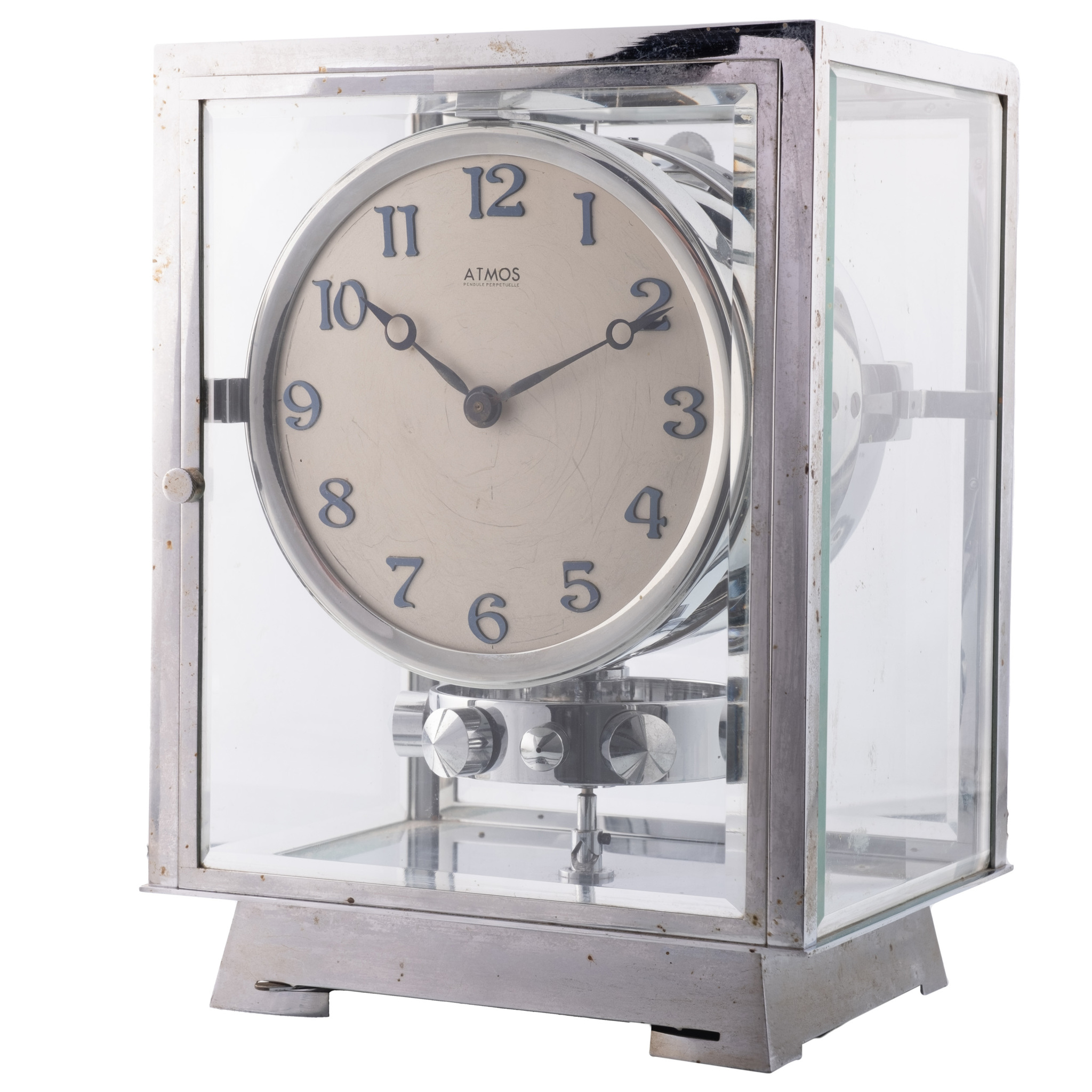 Caliber 30 A, chromium-plated, vacuum chamber with rotating drum driven by a mercury in glass expansion device winding the going barrel by a blued steel spring and ratchet, lever escapement driven by annular torsion pendulum with large screws, locking lever in the base below the pendulum

The “Atmos” clock
The “Atmos” clock was invented by the Neuchâtel engineer Jean-Léon Reutter (1899-1971). From his youth, he was preoccupied with the idea of industrially producing a clock that could be wound by atmospheric fluctuations.
In 1928, he developed the first “Atmos” clock, renamed “Atmos 0”. It is a clock with few construction elements, which is wound by means of a glass container filled with mercury. Under the effect of temperature variations, the mercury turns a cylinder to which it is connected, thus winding the mainspring of the timepiece.
In 1929, Jean-Léon Reutter licensed his patent to the French Compagnie Générale de Radio, which put him in charge of a department dedicated to the design, development and production of the “Atmos 1”.
This model of clock differed from the previous one by a greater attention to construction details and by the addition of ammonia to the heat-sensitive mixture that allows the clock to be wound.
The “Atmos 1” clock is probably the rarest model, with less than 3 000 in existence. It is also the only one to have been produced in France.
In 1935, the patent was bought by Jaeger-LeCoultre. The Parisian workshops founded by Edmond Jaeger (1858-1922) had been producing the “Atmos 1” movements for several years. Production was then transferred to Switzerland, to Le Sentier (Vallée de Joux), in the workshops of Jacques-David LeCoultre (1875-1948).
After a first phase, during which Jaeger-LeCoultre patented a new winding system, production of the “Atmos 2” began. The clock remained unchanged in terms of style and operation, with the exception of a few design modifications. Technically, there is no longer any mercury, but a gas in a hermetically sealed capsule that expands and contracts in response to even the smallest changes in temperature, causing the desired mechanical movement.
Its unique lines, as well as its ability to immediately strike the observer, have made the “Atmos” a legendary clock. After a difficult start, by 1979 there were half a million of these clocks, which quickly became popular but also prestigious objects, as the Swiss Confederation made them an official gift for heads of state and world leaders when they visited Switzerland.
As the advertising slogan of the time said, the “Atmos” is a clock “qui vit de l’air du temps” (that lives on the air of time).