The watch offered by Richard Mille to Laurent Fries, Master Watchmaker, in recognition of his services 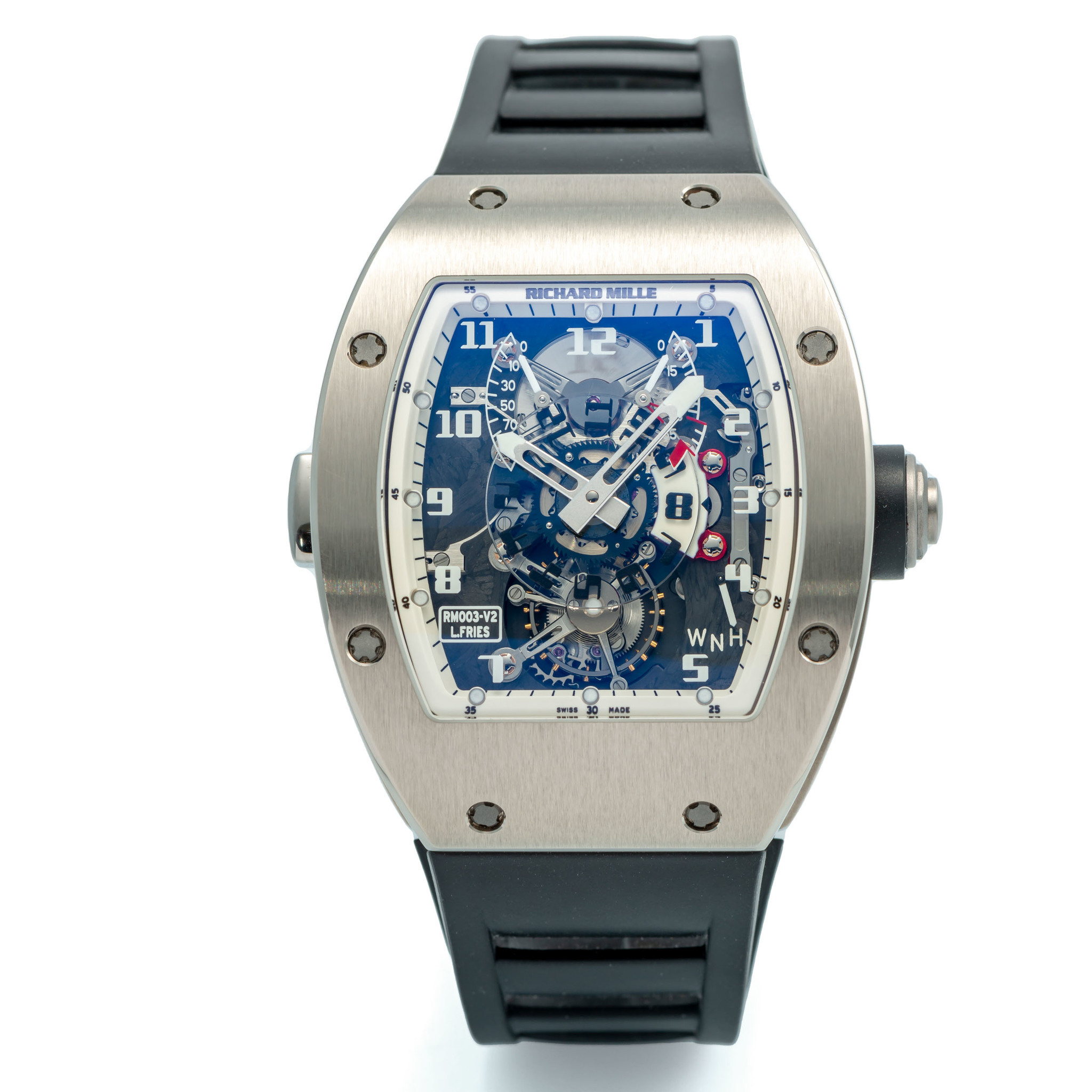 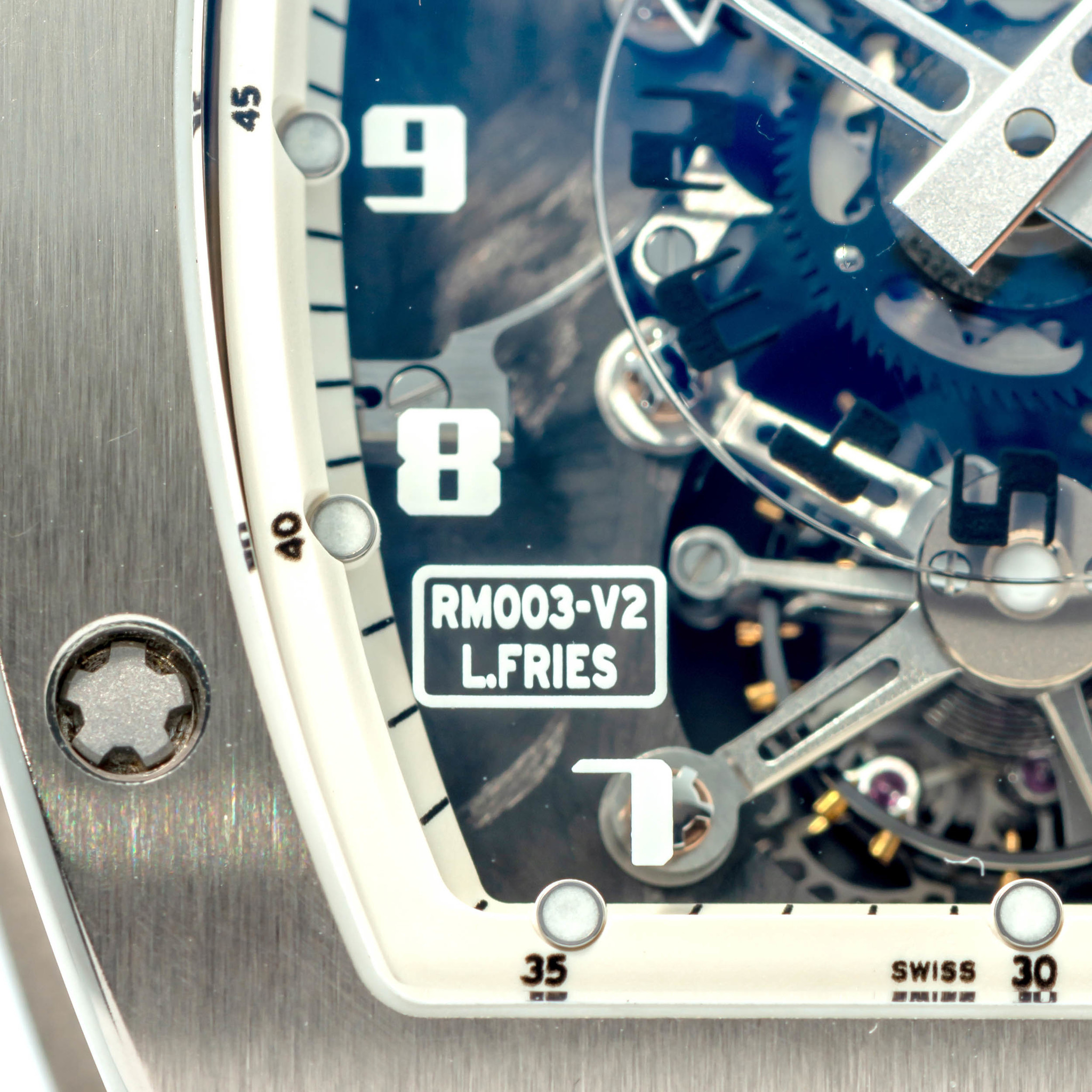 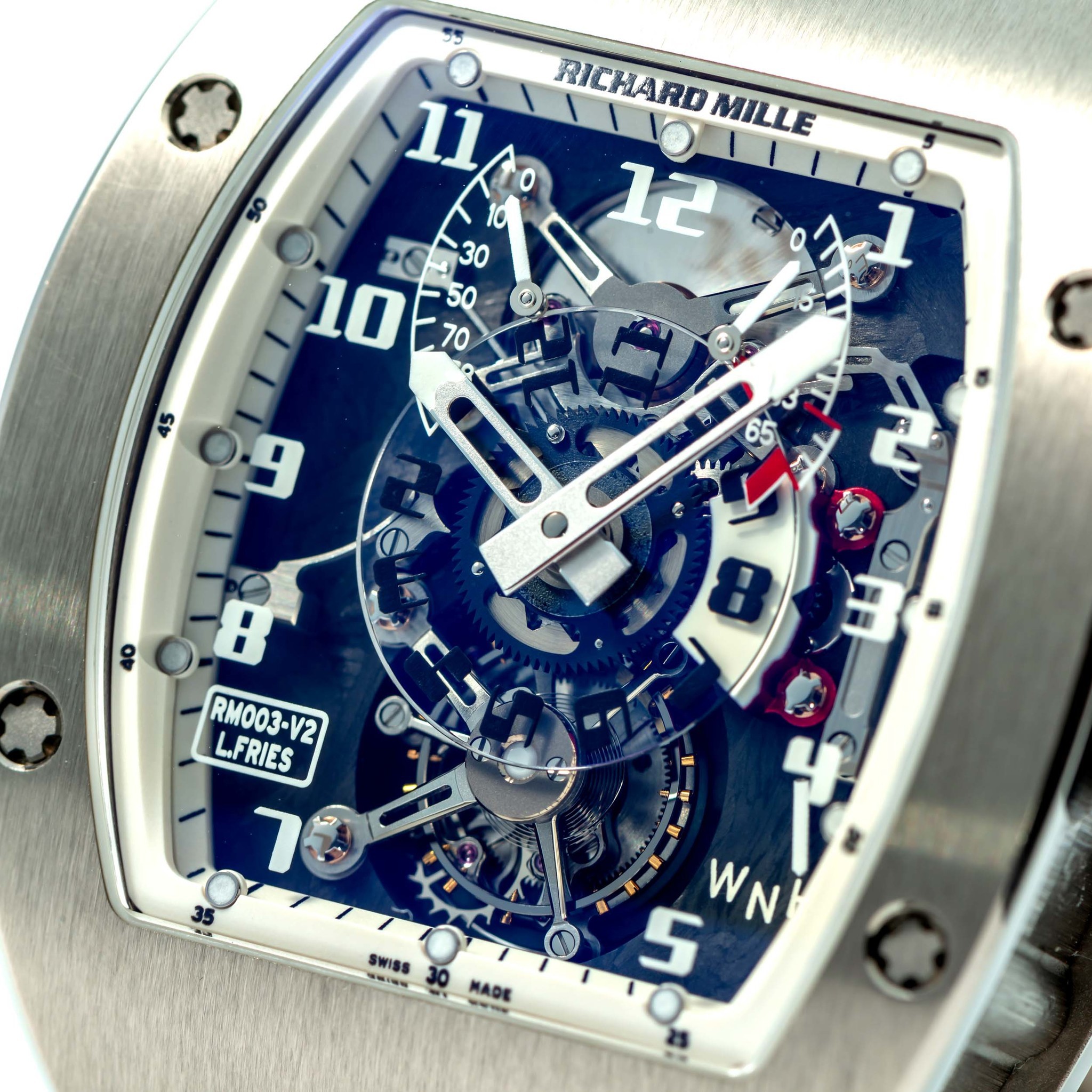 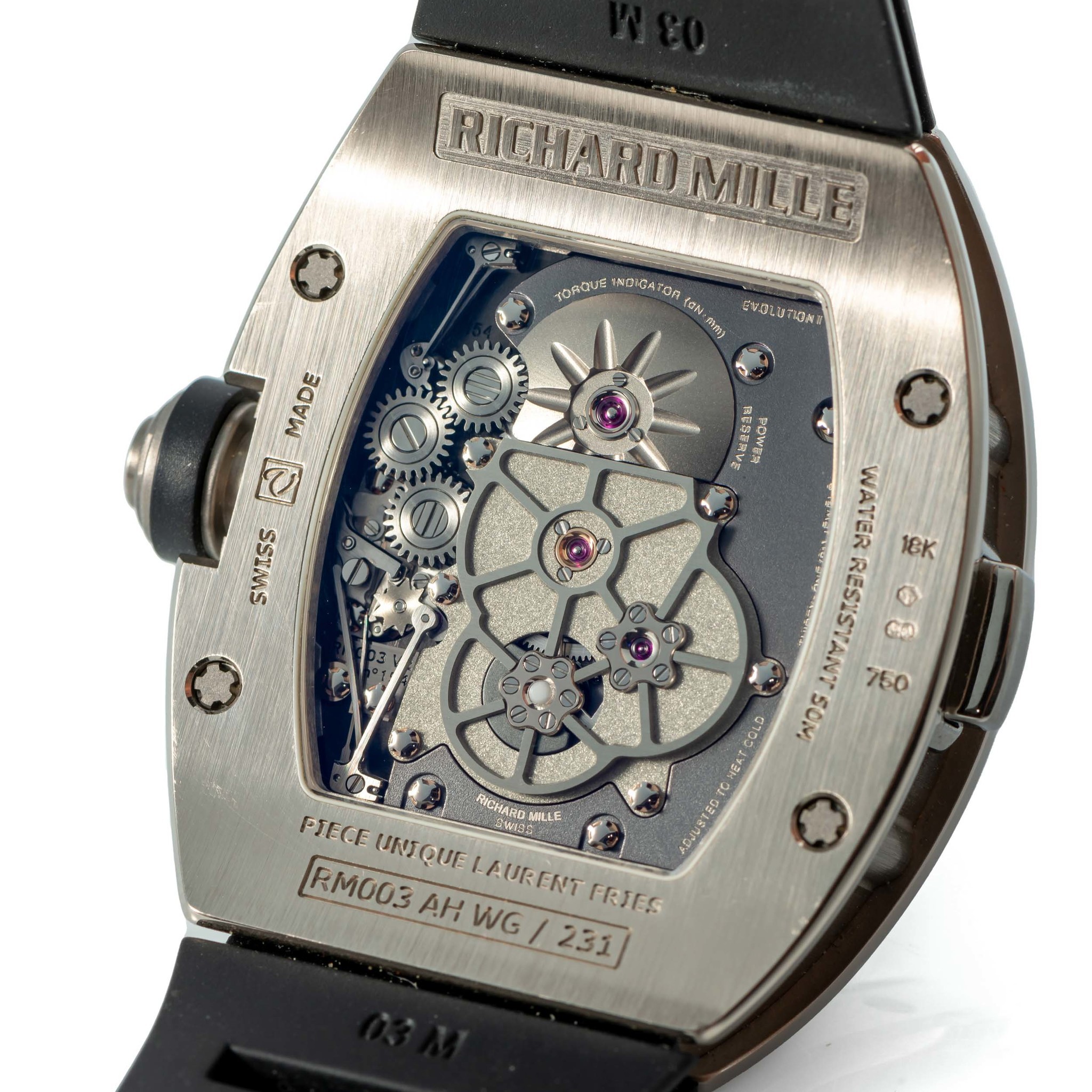 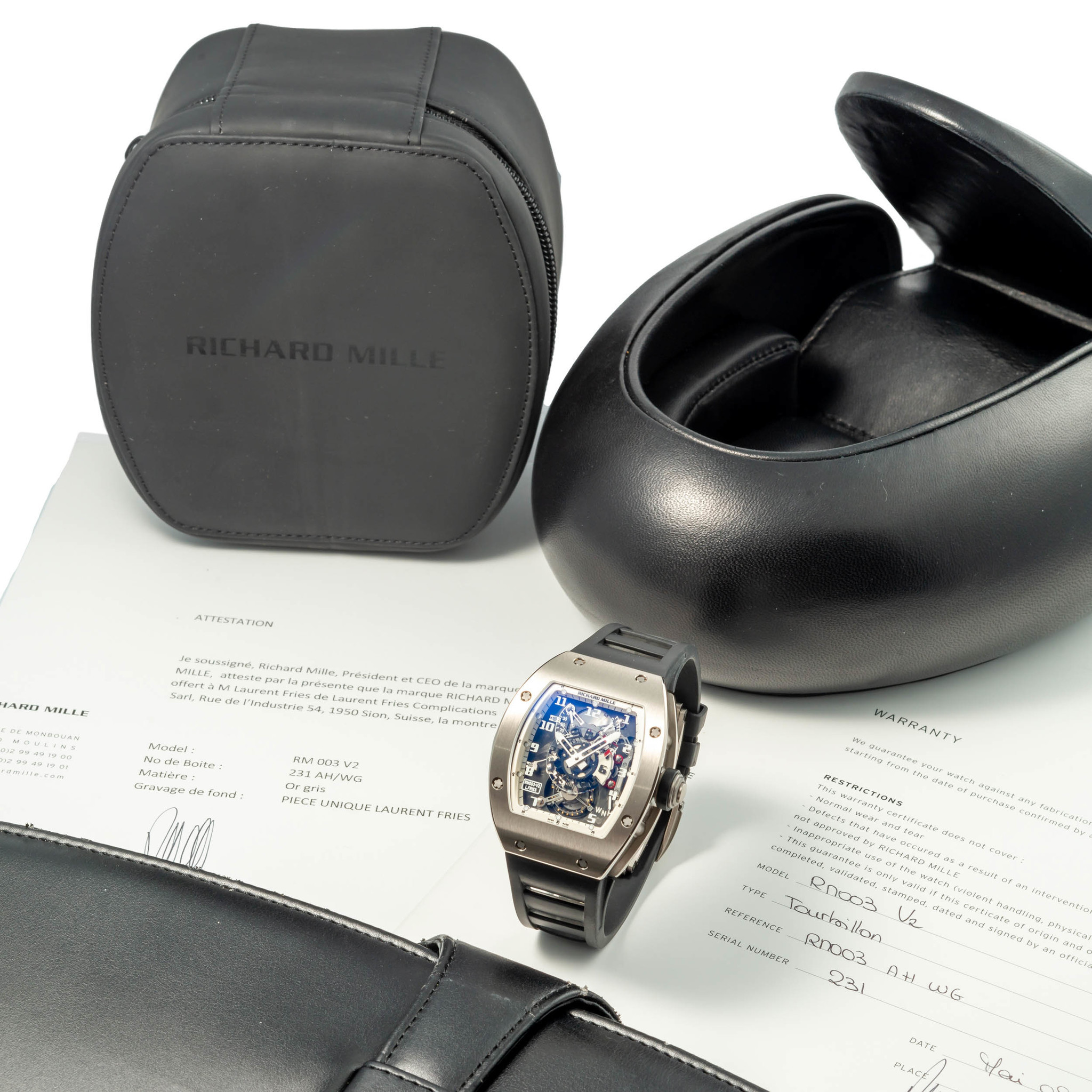 This watch was offered by Richard Mille, President and CEO of the Richard Mille Swiss manufacture, to Laurent Fries of Laurent Fries Complications Sàrl, Sion (Valais), in recognition of his services as a Master Watchmaker-Constructor and Tourbillon specialist.
--
The RM 003-V2 Laurent Fries
The RM 003-V2 Laurent Fries is a unique timekeeper with the following specific features that make it truly unique:
· First of all, its ring-dial is white in colour, unique in the world.
· In the construction of the movement, one immediately notices that under the tourbillon carriage, the seconds wheel is grey. This movement is actually equipped with a gear train from a RM-15; this gives it a different visual appearance because the gear train is grey and not brass.
· Another important point is that this RM-003 is made with a 18K white gold case.
Approximately 200 “normal” pieces with this reference were manufactured and distributed worldwide between 2004 and 2009, but this one is an “OAK”, one of a kind!
This watch, which was partly made by Laurent Fries, was the object of the greatest care on his part.

For more than 20 years, Laurent Fries (born in 1979) has been a watchmaker specialising in watches with horological complications and in particular tourbillons, whose high added value is no longer in question.

Between 1996 and 2000, he attended the Ecole Technique d’Horlogerie et de Microtechnique (Technical School of Watchmaking and Microtechnology) in Porrentruy (Canton of Jura), from which he graduated.

Since 2001, he has been working for Audemars Piguet S.A. in the structure managed by Dominique Renaud and Giulio Papi.

Renaud & Papi is a company specialising in the design and production of watches with horological complications, established in Le Locle in the Neuchâtel mountains (Canton of Neuchâtel). There, he worked on the complete assembly of tourbillon watches for the Richard Mille brand; a manufacture based in Les Breuleux in the Franches-Montagnes (Canton of Jura).

After a few years, he decided to set up his own subcontracting workshop in Sion (Canton of Valais).

To date, Laurent Fries has assembled more than 800 tourbillons for the Swiss watch industry, including exceptional, limited and set series.