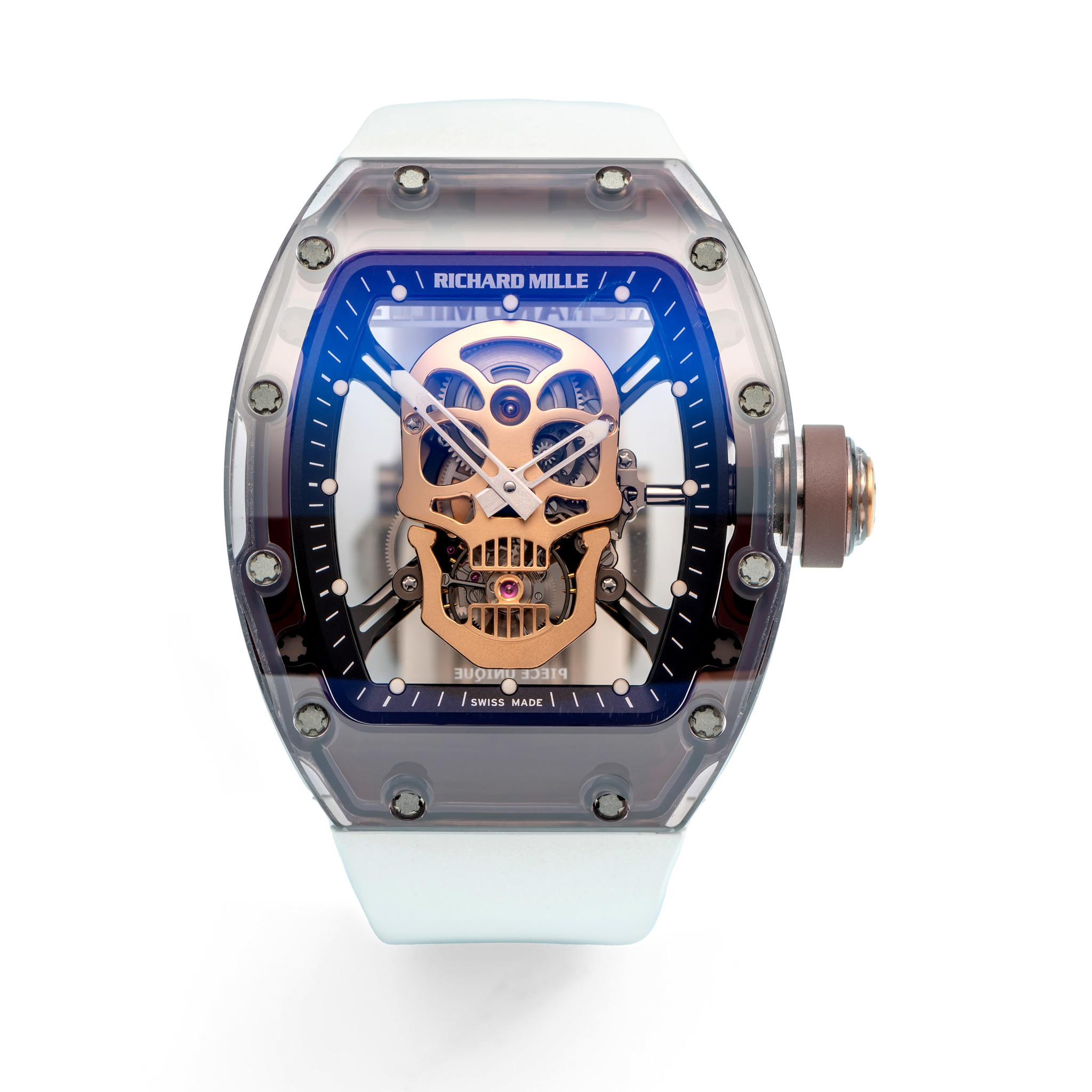 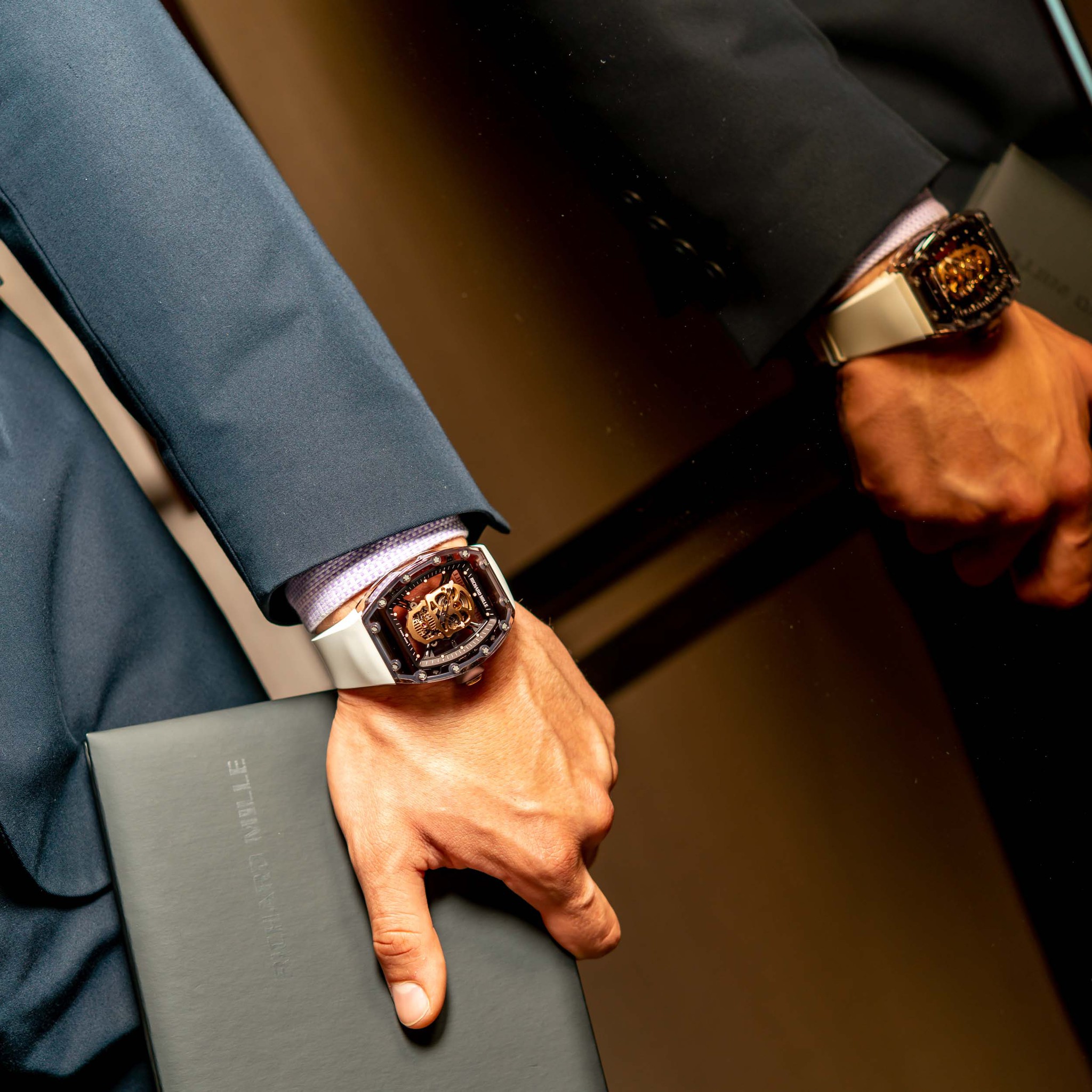 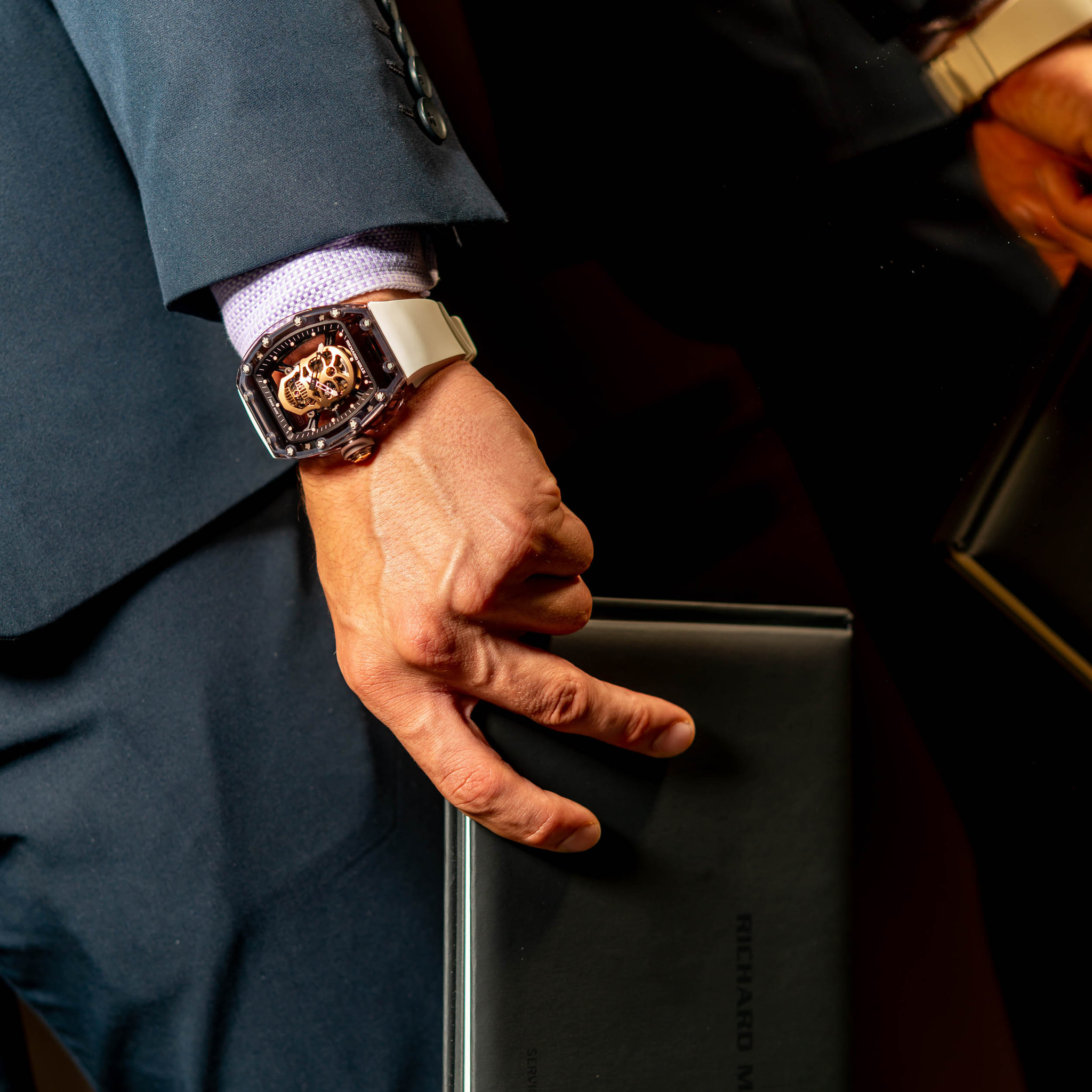 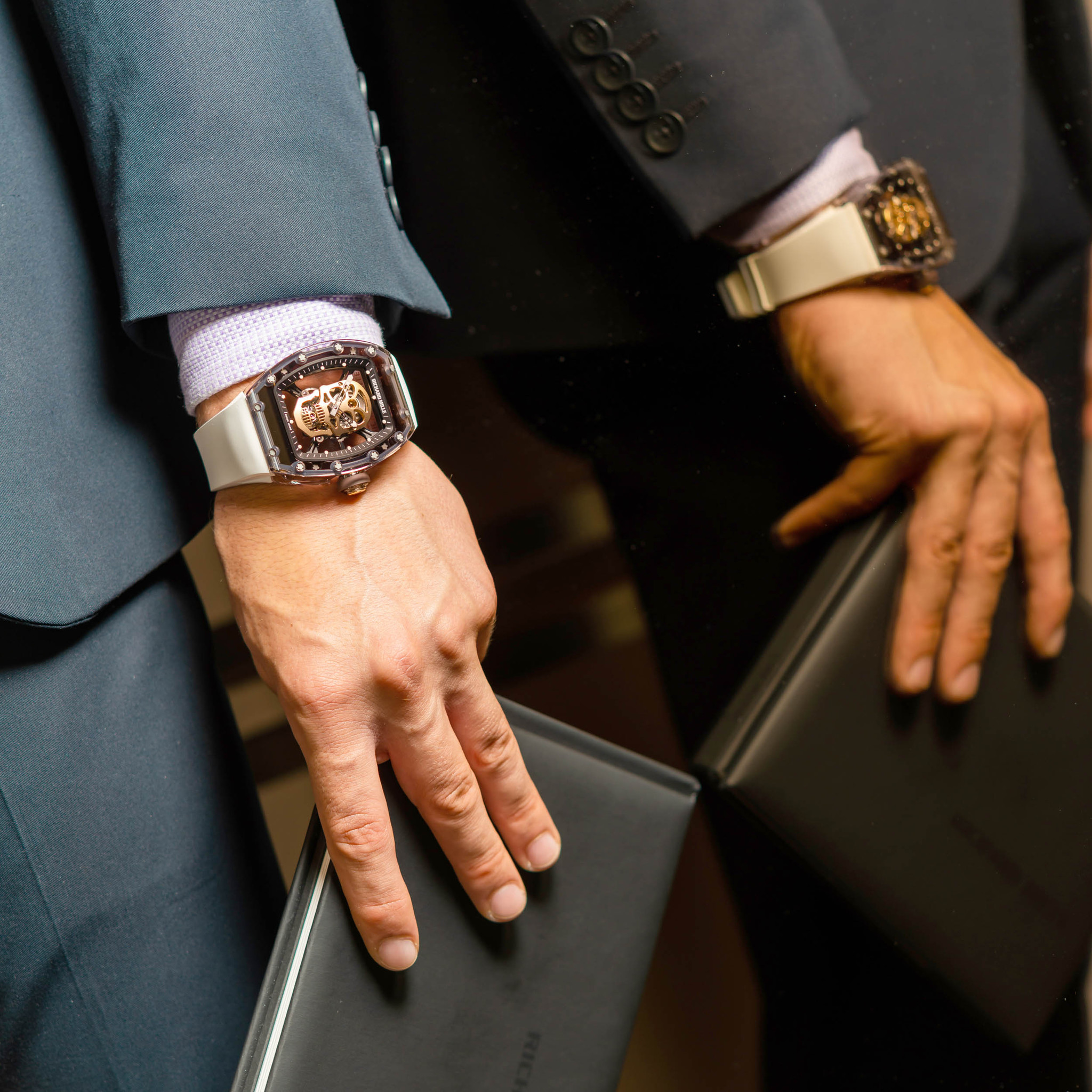 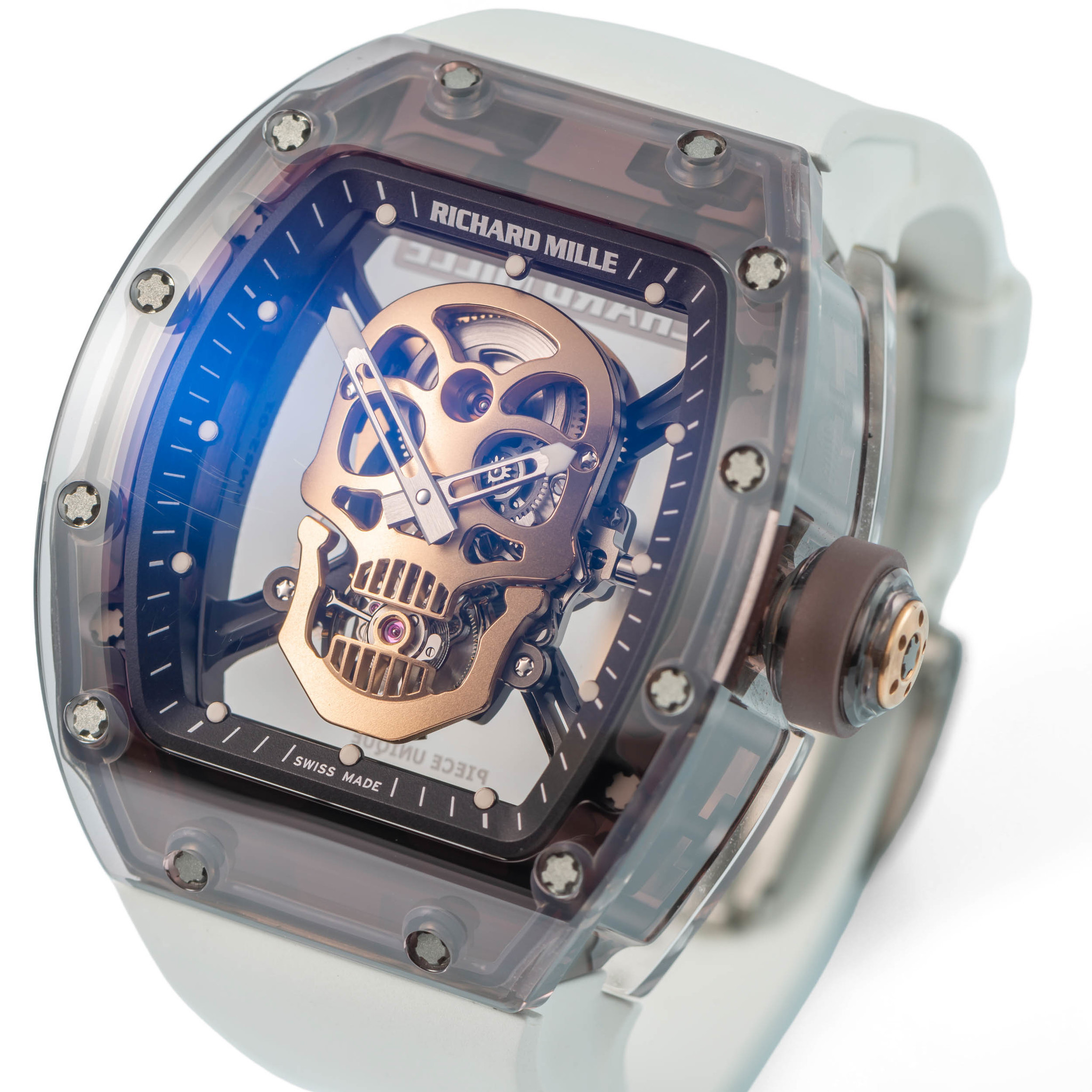 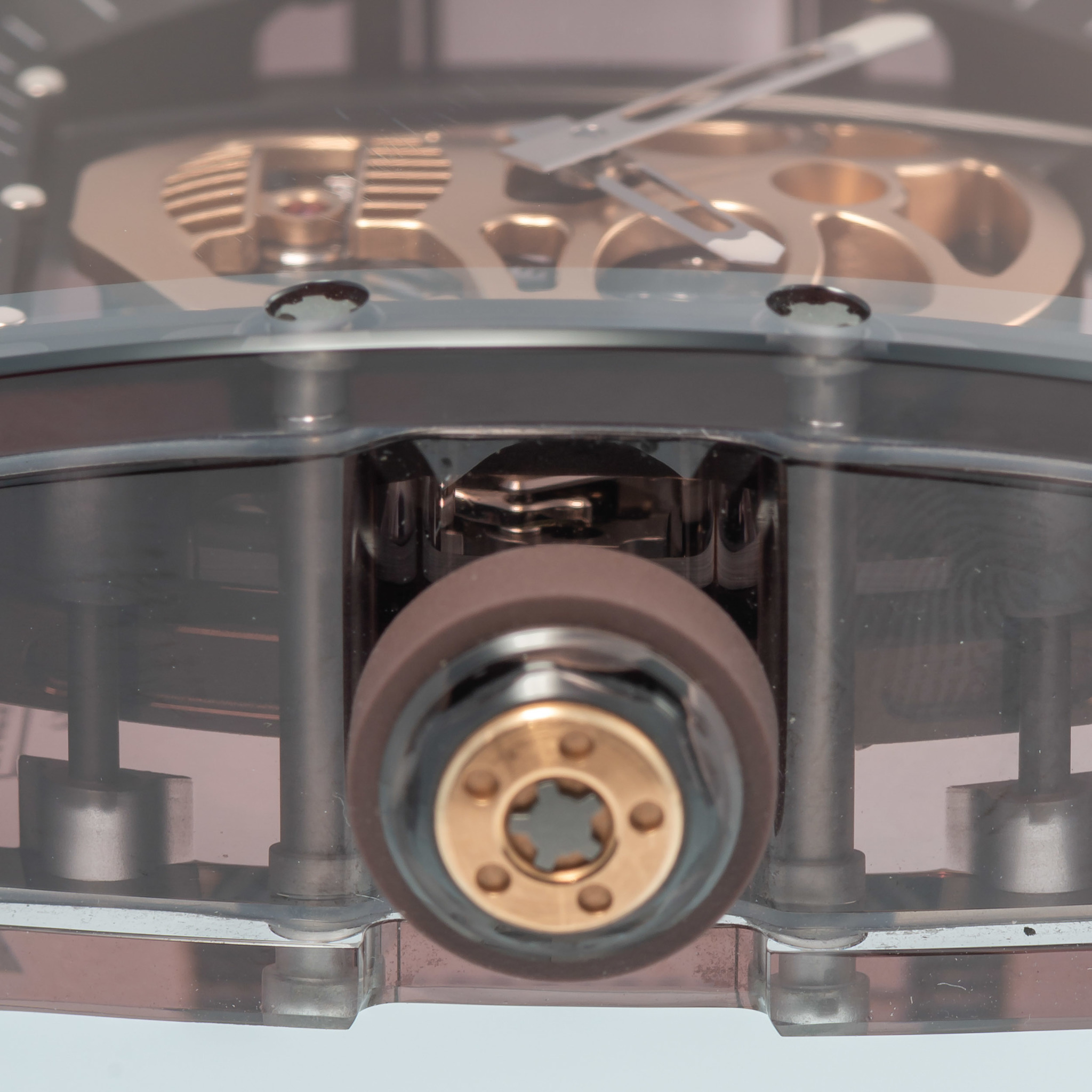 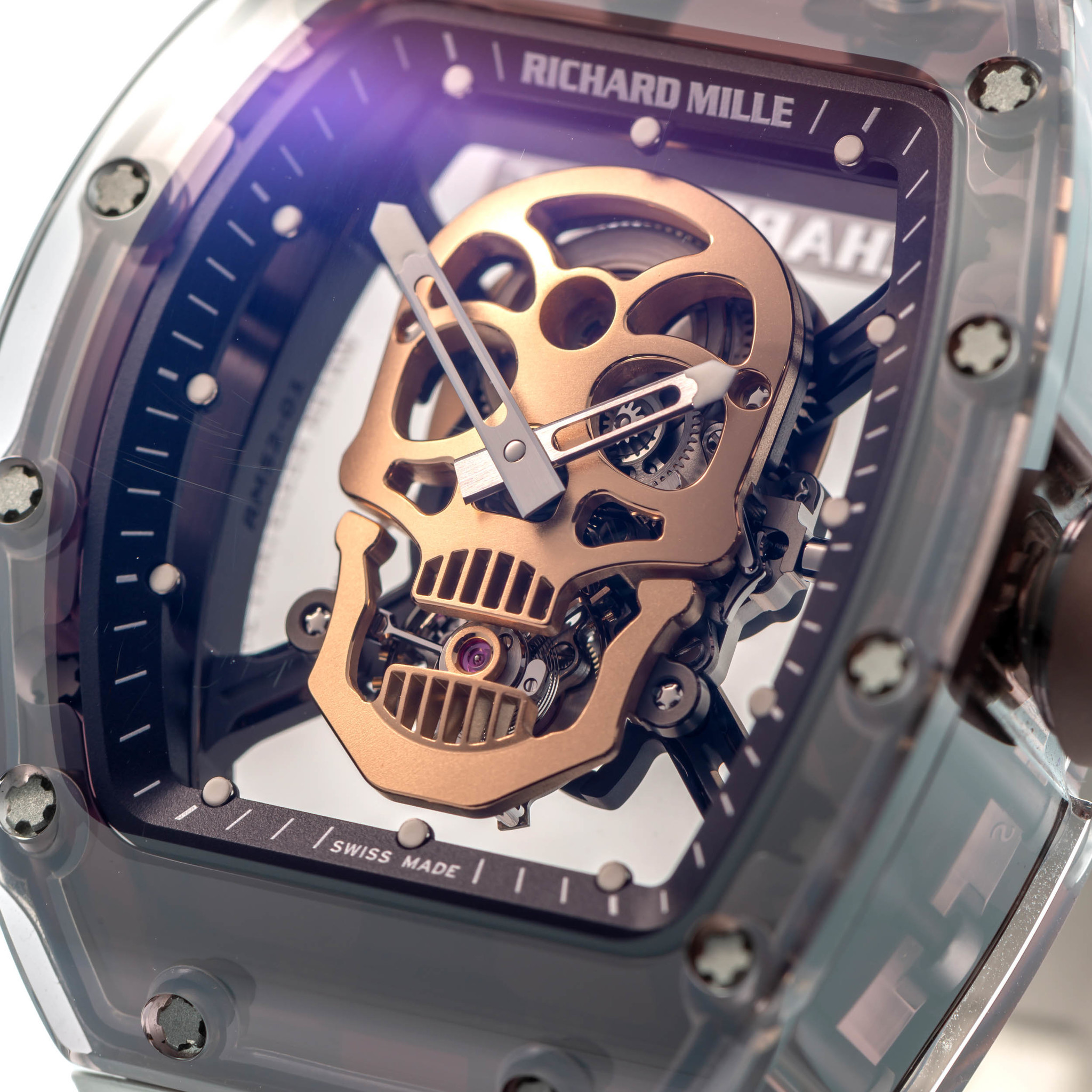 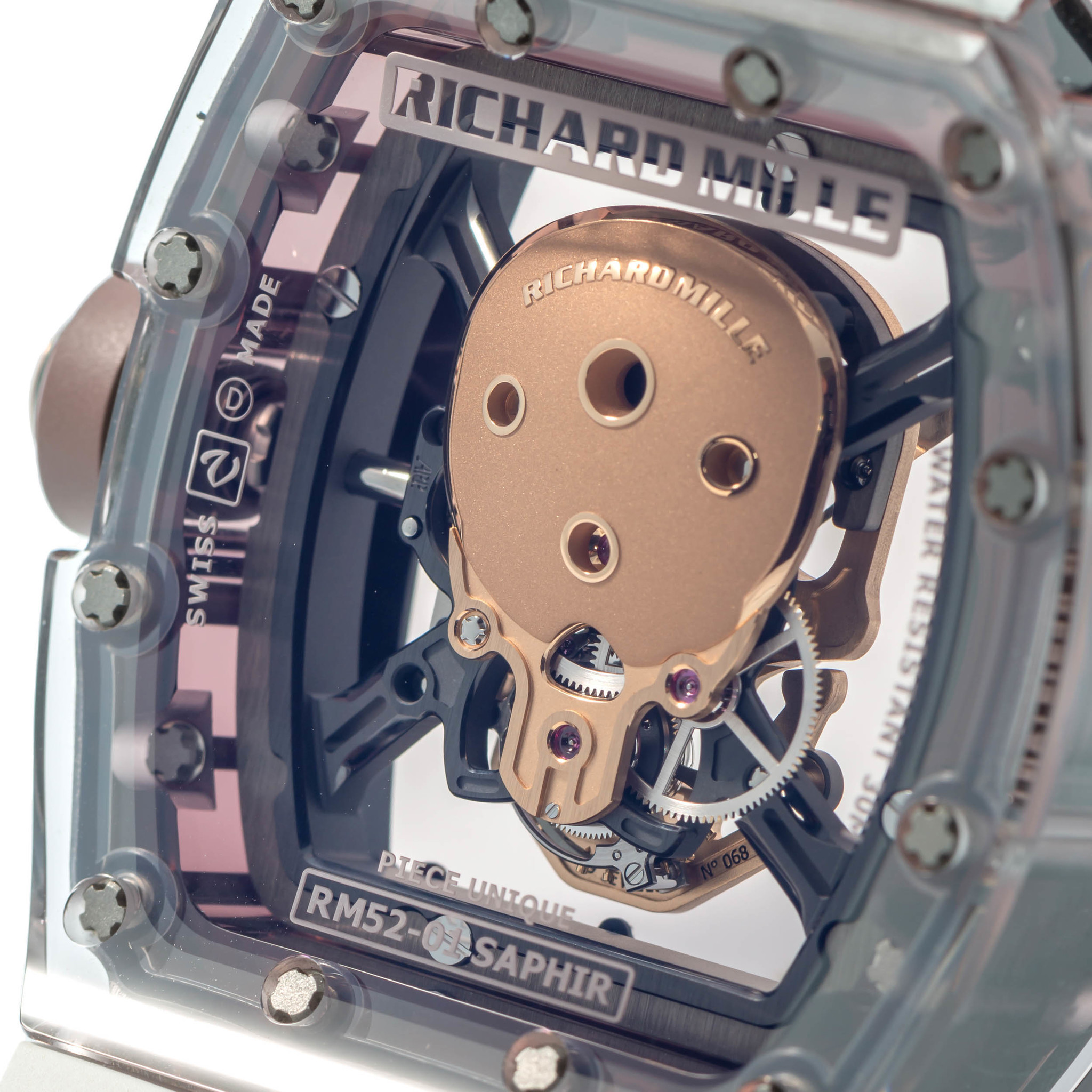 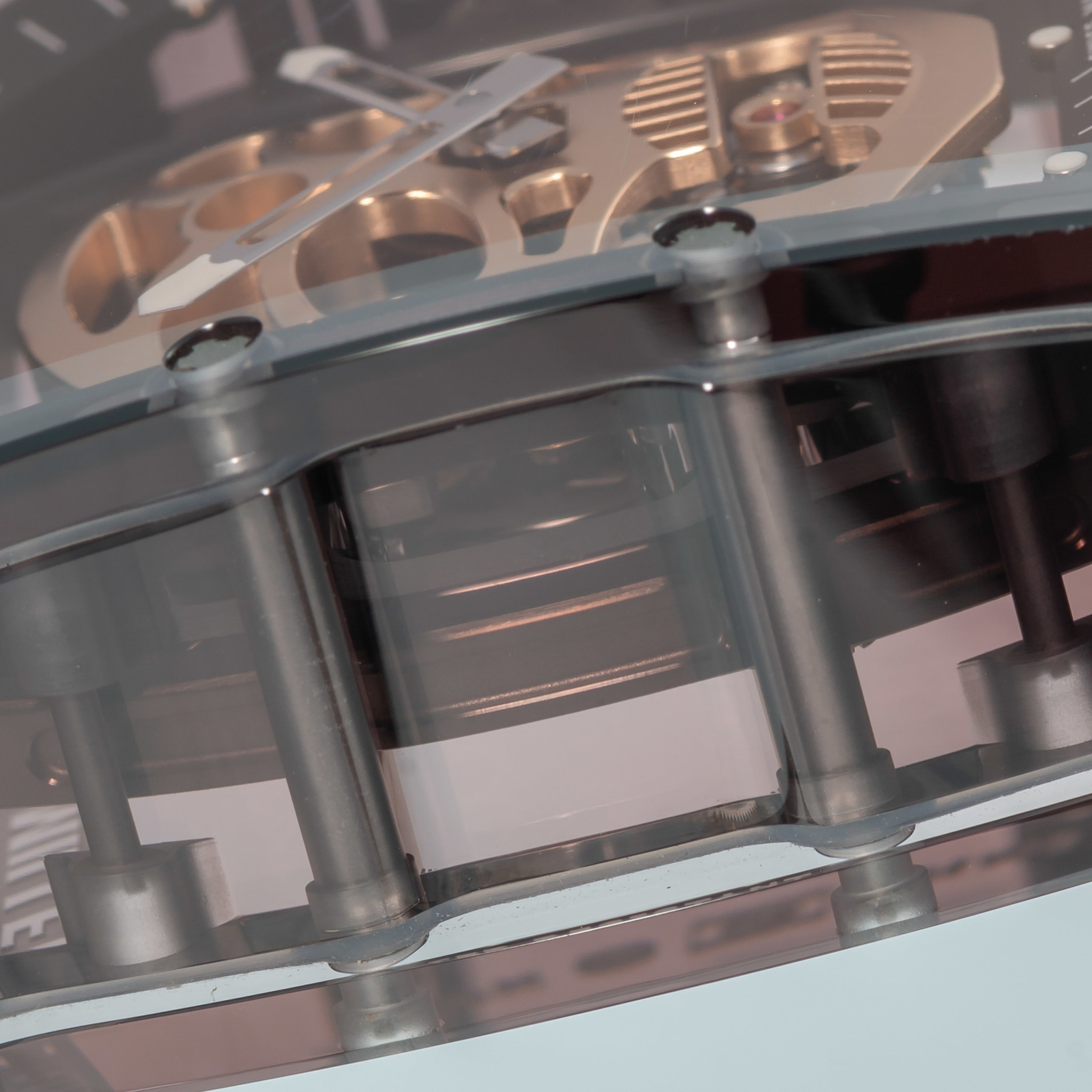 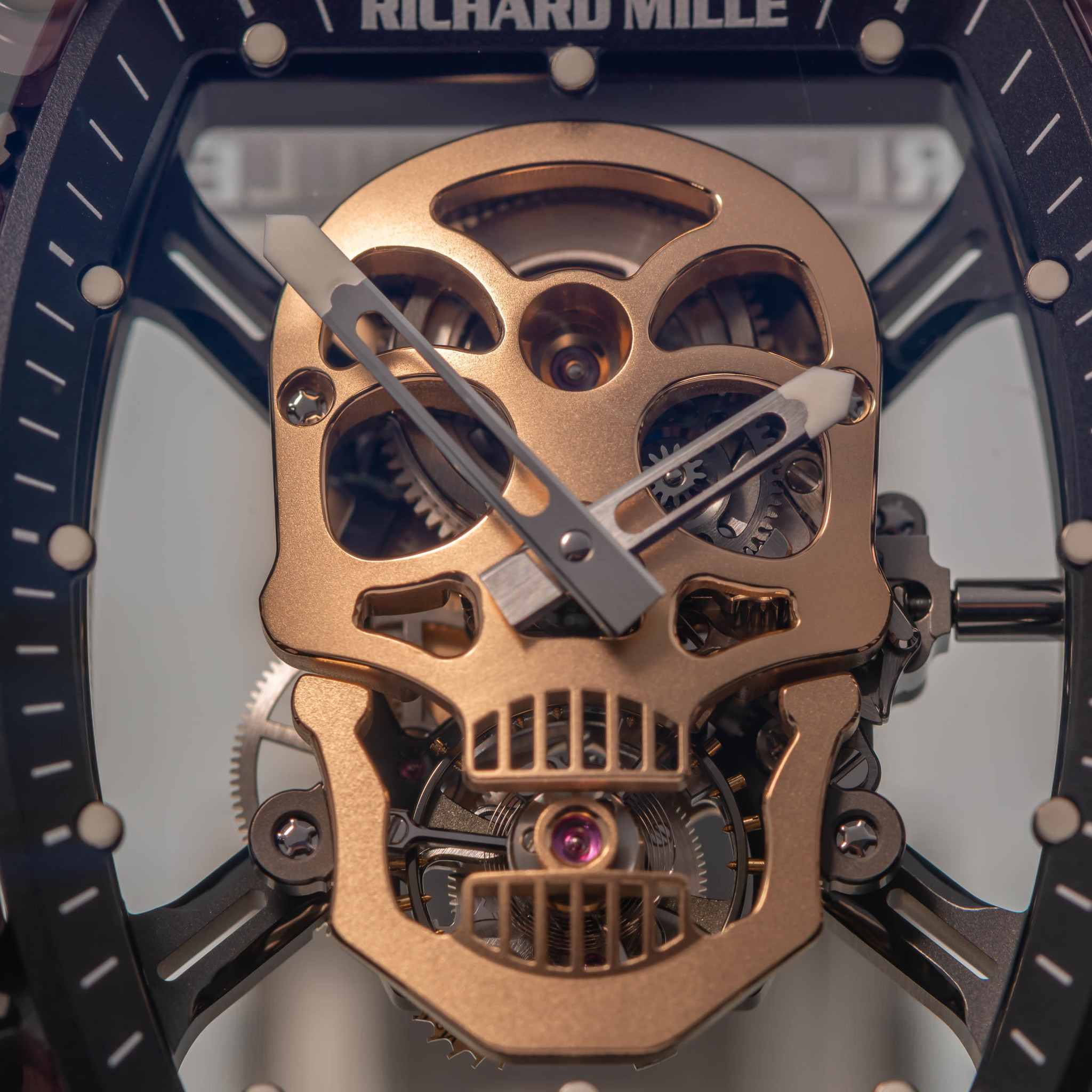 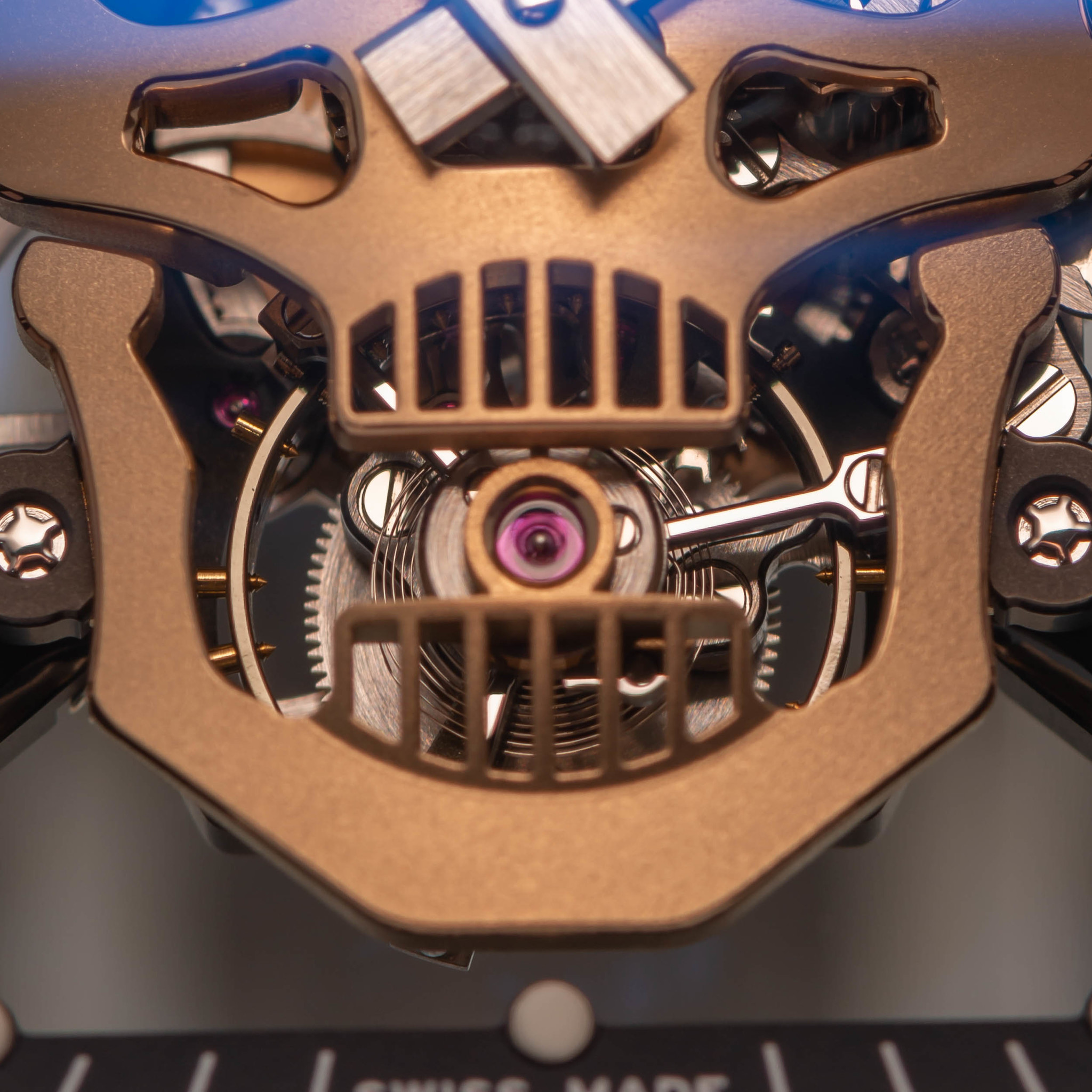 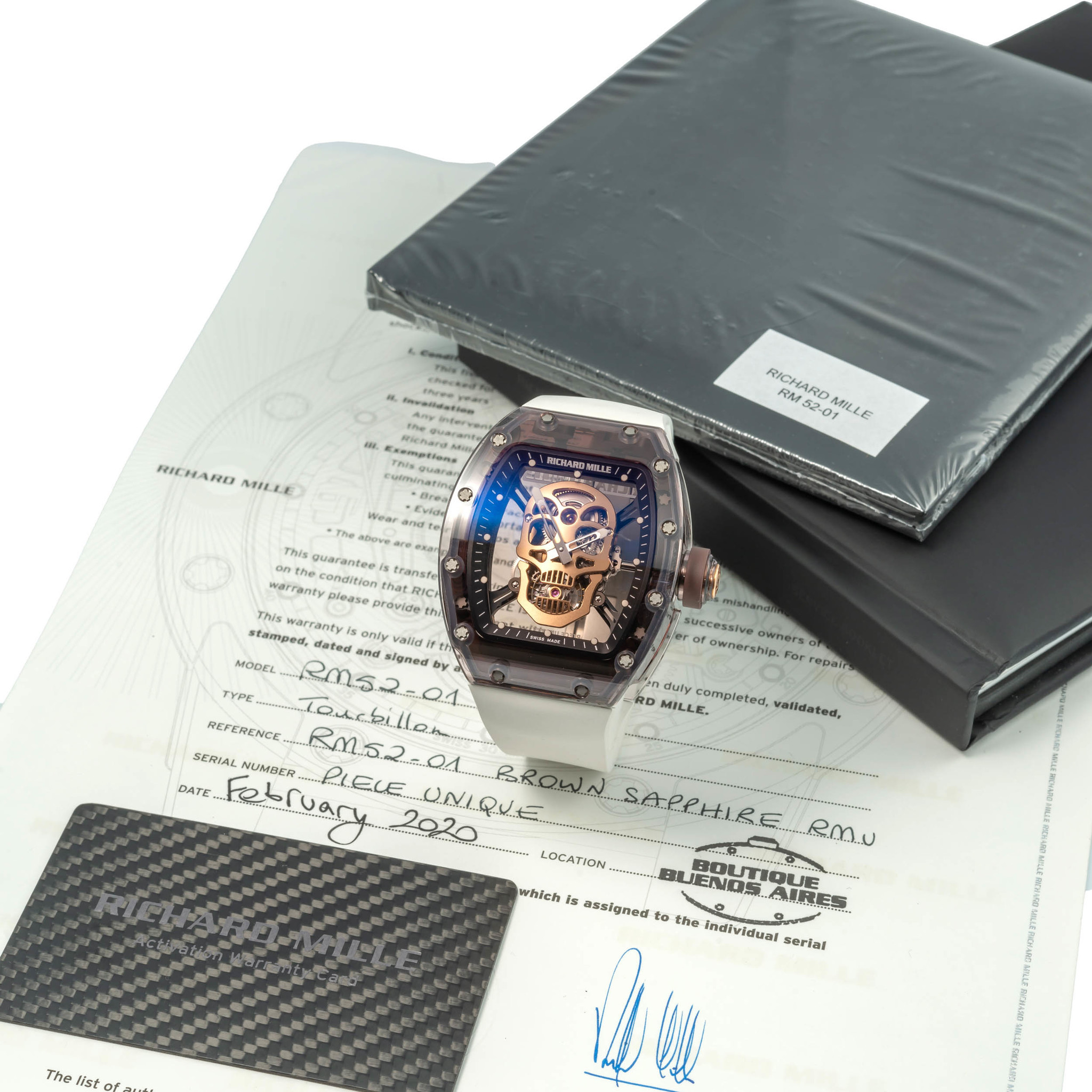 In the early 2010s, Richard Mille, whose brand was founded in 2001, is in full expansion and is bursting with imagination and creating brilliant watches, which are now “iconic”.

The watch we are offering today – new to all knowledge – is the union of two major innovations and ideas that we know of the man, watchmaker and entrepreneur, on the one hand the “RM 052 Tourbillon Skull”, on the other the “RM 56-01”.

By making the aesthetic choice to integrate the complex symbol of the memento mori or “vanitas vanitatum” into the movement of its watches, Richard Mille wished to evoke both a promise of eternity and the need to live the present moments intensely.

Since the beginning of humanity, the skull has been linked to many symbolic concepts from a wide variety of fields, sometimes used on a purely visual level, sometimes to embody different beliefs and ideologies.

This theme can be found in the West, in the past centuries, in numerous cabinets of curiosities or pictorial works, but also from the middle of the 17th century in the field of watchmaking, where watch-cases were made in the shape of human skulls.

The RM 052 Tourbillon Skull, presented in 2012 by Richard Mille, reflects these precepts. Its movement symbolises freedom and non-conformism, perfectly embodying the brand’s philosophy.

Extreme technique, high performance, attention to every detail, aestheticism pushed to its paroxysm, hand finishing make the RM 052 Tourbillon Skull pieces of very “Haute Horlogerie”, actively sought-after by collectors around the world. This reference was produced in 2012 in only 21 pieces; each of the watches sold for more or less half a million Swiss francs.

While others would have been content to exploit the purely visual aspect of the skull, Richard Mille has taken this concept a step further by integrating it fully into its watch. The plate and bridges of the movement thus form this skull (made of grade 5 titanium). The jawbone and the mandible enclose the ruby of the tourbillon carriage. The back of the skull acts as the centre-bridge.

The skeleton movement, its main-plate and bridges, have been subjected to demanding validation tests to optimise their resistance capabilities. The movement is linked to the case by four bridges inspired by the crossed bones that appear on the flags of pirate ships.

The RM 56-01 Sapphire watch symbolises, through the purity of its transparency, all the brand’s expertise. Its case is insensitive to temperature variations and wear, guaranteeing excellent stability and offering the movement the possibility of exemplary chronometric performance. It was marketed from 2011-2012 in a few pieces, followed in 2014 by the RM 56-02 in ten examples; each of these timekeepers sold for over two million Swiss francs.

The cases of these pieces are exceptional. Made in three parts, each component (bezel, case-band and case-back) is created from a block of sapphire cut from the mass. More than 40 days of machining, 24 hours a day, are necessary to obtain this case!

This machining operation required the purchase of a special CNC machine dedicated to the RM 56-01. This kind of production tool costs more than one million Swiss francs, or even more than two.

All the sapphire parts were machined by a leading specialist in this material, the Stettler company in Lyss, Switzerland (Canton of Bern, administrative district of Seeland). The case fits snugly around the wrist and is water-resistant to 30 metres thanks to two transparent Nitrile O-rings. It is assembled around the calibre by means of titanium (grade 5) “spline” screws and wear-resistant stainless steel (316L) washers.

Sapphire is renowned for its high scratch resistance and for being one of the hardest materials available, with a hardness of 9 on the Mohs scale. It is made up of aluminium oxide (Al2O3) crystals and its transparency is a result of its molecular composition.

The greatest achievement for Richard Mille was the machining of such parts. The challenge was all the more perilous as the processing of sapphire is extremely delicate. Although very resistant, sapphire does not allow the slightest error in cutting or milling.

The same was true in the 17th century for the creation of rock-crystal watch -cases. The lapidaries and jewellers who worked on these pieces sometimes suffered the unpleasant surprise of seeing their work reduced to shards of crystal. A few museums, institutions and collectors around the world own some of these master-pieces of ancient watchmaking that were the prerogative of the highest dignitaries of old Europe, Emperors, Kings and Queens, Princes and Princesses, Popes, Archbishops and Abbesses.

As mentioned above, the production of such a case requires no less than 1 000 hours of machining, including 430 hours of preforming its components and 350 hours of polishing the entire watch case. The cutting tools must be specially designed for this purpose and equipped with a diamond tip. To obtain optimal optical properties, the bezels have undergone an anti-reflective treatment.
The RM 52-01 Skull Tourbillon “The Vanitas Vanitatum”
The watch we present here is therefore, in a way, the meeting of the two references mentioned above; a sort of symbiosis of the two watches.
It is unique. Among the very rare sapphire models, it seems to be the only Richard Mille watch with a case made of brown sapphire. Its dimensions are also larger than its predecessors; its proportions much more consequent.

This real tour-de-force was manufactured in 2019 and sold in Buenos Aires (Argentina) in February 2020; the original buyer remains unknown to this day.
The Richard Mille brand probably represents the greatest success story in the watchmaking world over the last twenty years, with production increasing from a few dozen units per year to a few hundred, then to a few thousand. Today, production is estimated at around 3 000 pieces per year.
While its production is already exclusive, it is common knowledge that Richard Mille produces spectacular watches like this one from time to time.
These objects, often special orders made for special clients, are rarely seen on the art market and only very occasionally pass from one collector to another “aficionado” of the brand. It is therefore a unique opportunity today to come into possession of such a master-piece.
This watch – which we will now denominate “The Vanitas Vanitatum” – one of the most important in Richard Mille’s “œuvre” (work), is now entering the limelight and is probably destined to become a legend in the history of contemporary watchmaking.