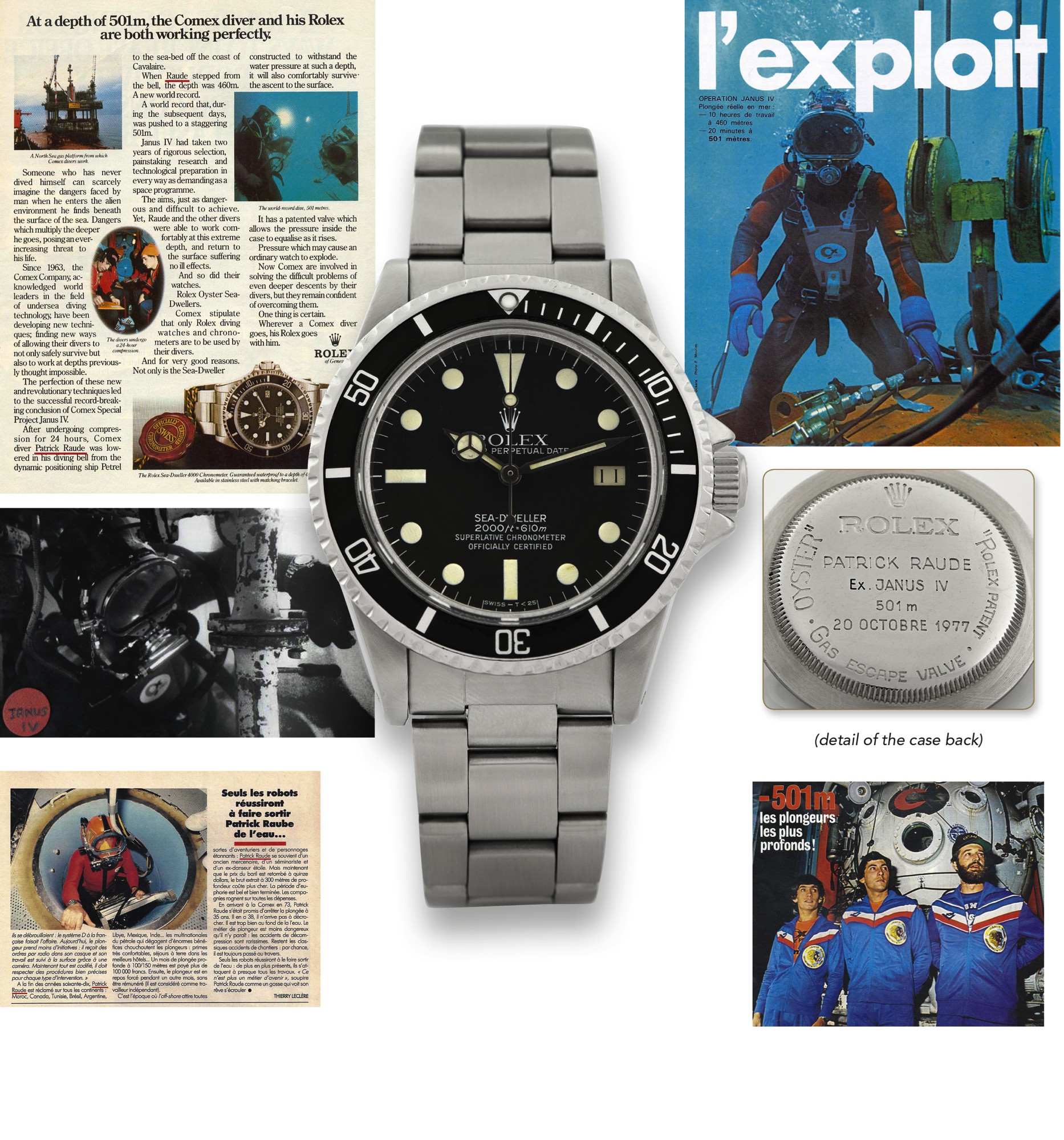 Patrick Raude The name of Patrick Raude is a name that will forever be associated with the history of the Comex explorations dives as well as with Rolex collectors as his name was used in offi cial Rolex advertising for the Seadweller. For his achievements and contributions he was named ?Chevalier and then Offi cier dans l'ordre Nationale du Merite?.
Mr Raude was born in 1950. Following the footsteps of his uncle, a marine commando who perished on a beach in Normandy during D-day, he joined the commando forces in 1968. After his basic training he joined the famous naval frogman unit (Commando Hubert) for the next four years.
He joins Comex as a diver in 1970 and it is there that he embarks one one of the most amazing careers ever recorded.
In 1975 in Marocco, he beats the world record in open waters at a depth of -270m. The same year in Labrador off the coast of Canada, he further improves it by diving to -327m. As part of the famous Janus IV expedition in 1977, he was a member of the team of six that set the world record at -501m. 5 years later, he beats the world record in hyperbaric chamber at -613m and fi nally in 1988 during Hydra VIII, he beats the open water record again at -530m, record that still stands today. It is a unique opportunity to acquire a world record depth Seadweller directly from Mr Raude himself.
Janus IV The Janus IV Operation, organized by Comex, comprised two phases. The experimental phase, took place in December 1976, in Comex?s Hyperbare experimental center in Marseille. Comex divers Jacques Verpeaux, Patrick Raude, Louis Schneider, Philippe Jeantot, Vito Lentini, and John Mac Kenna, as well as two divers from the French Marines, Emile Sevellec and Gérard Vial, took part in tests and exercises inside a sphere fi lled with water. The pressures they experienced were equivalent to those at 430 to 480 meters. Patrick Raude remembers that after the fi rst tests, all 6 members of the team were given a watch to test during Phase 2. After successfully completing their task, the watches were returned to Rolex were they were engraved and given back to each of them as a token for their incredible record.
The practical phase of the operation was carried out in the Mediterranean, off the coast of Cavalaire in France. The divers were Jacques Verpeaux, Patrick Raude, Louis Schneider, Philippe Jeantot, Emile Sevellec and Gérard Vial. The saturation chambers that they were to live in for the entire operation were slowly pressurized to the pressure experienced at below 430 meters of sea water. Then their vessel, the Petrel, made its way toward the site of the operation. The fi rst diving team was made up of Patrick Raude, Jacques Verpeaux and Gérard Vial. Jacques Verpeaux was the fi rst to dive, going down to 460 meters in the open sea. Gérard Vial followed, then they were brought back up and the second team went down. Over the next three days, several successful dives down to 460 meters were made, during which the divers installed a mechanical and hydraulic subma-rine pipeline, carrying out tests of underwater soldering procedures. On the evening of October 19, 1977, as the divers were resting in their chamber, Mr. Henri Germain Delauze, director of Comex, told them over the loud-speaker how pleased Comex was with the results. He further announced that Comex?s scientifi c committee had decided to attempt a descent to the never-before attained depth of 500 meters. He asked the six divers if they agreed to try, and all volunteered to do so. Jacques Verpeaux made his dive, and the registers on the surface indicated he had reached a depth of -501 meters, an exploit never before accomplished. A record had been beaten, and all the sirens of the Petrel and the accompanying boats went off in celebration. Verpeaux smiled for the cameras, then took up a plastic slate and wrote ?Janus IV, 500 meters, 1647 feet?. Ten days later, the divers were acclaimed by an overjoyed crowd. The Janus IV Operation was the last diving test made in the open seas using Trimix Helium, which was principally made up of helium, with oxygen and a tiny percentage of nitrogen. It helped determine the limits of human intervention in diving technology.