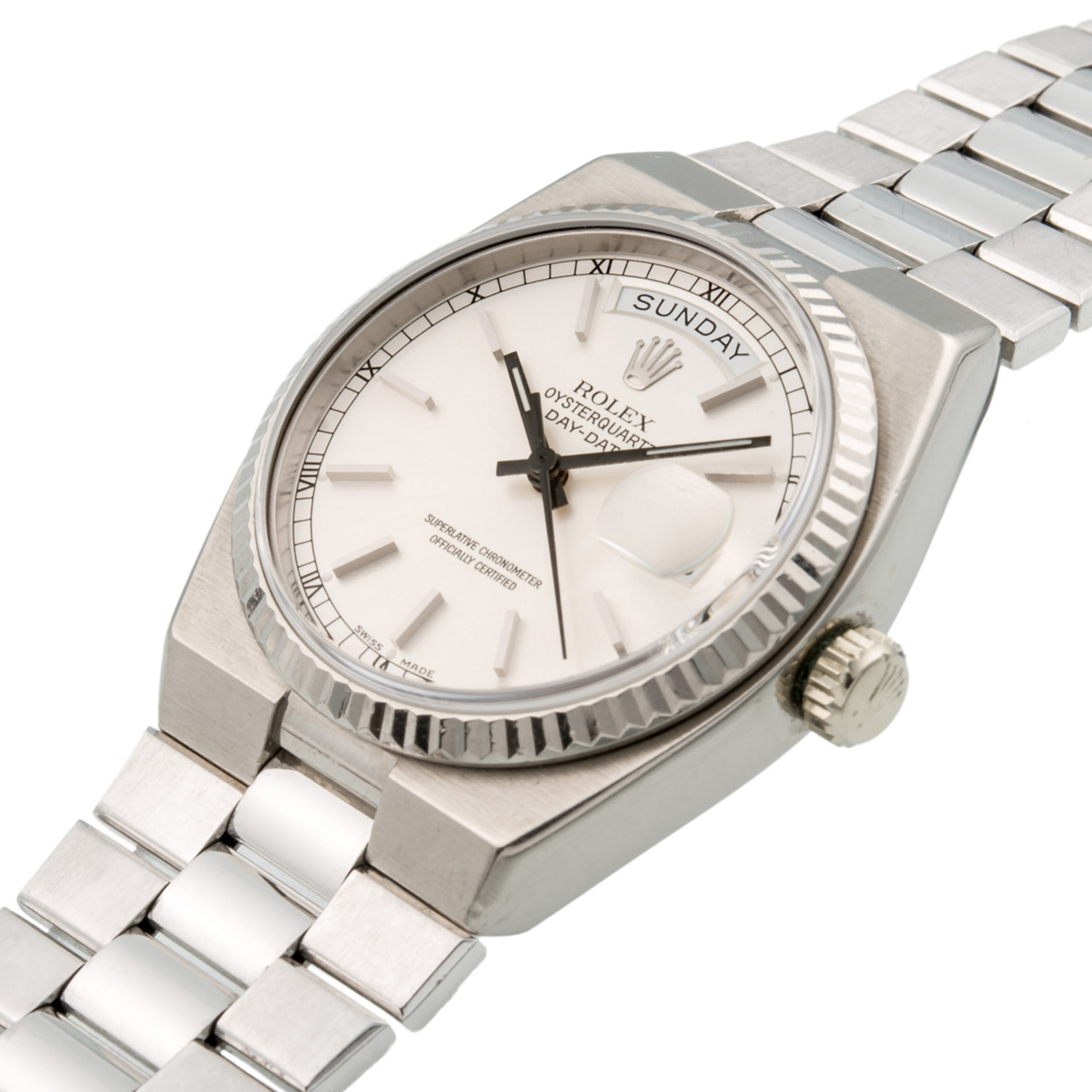 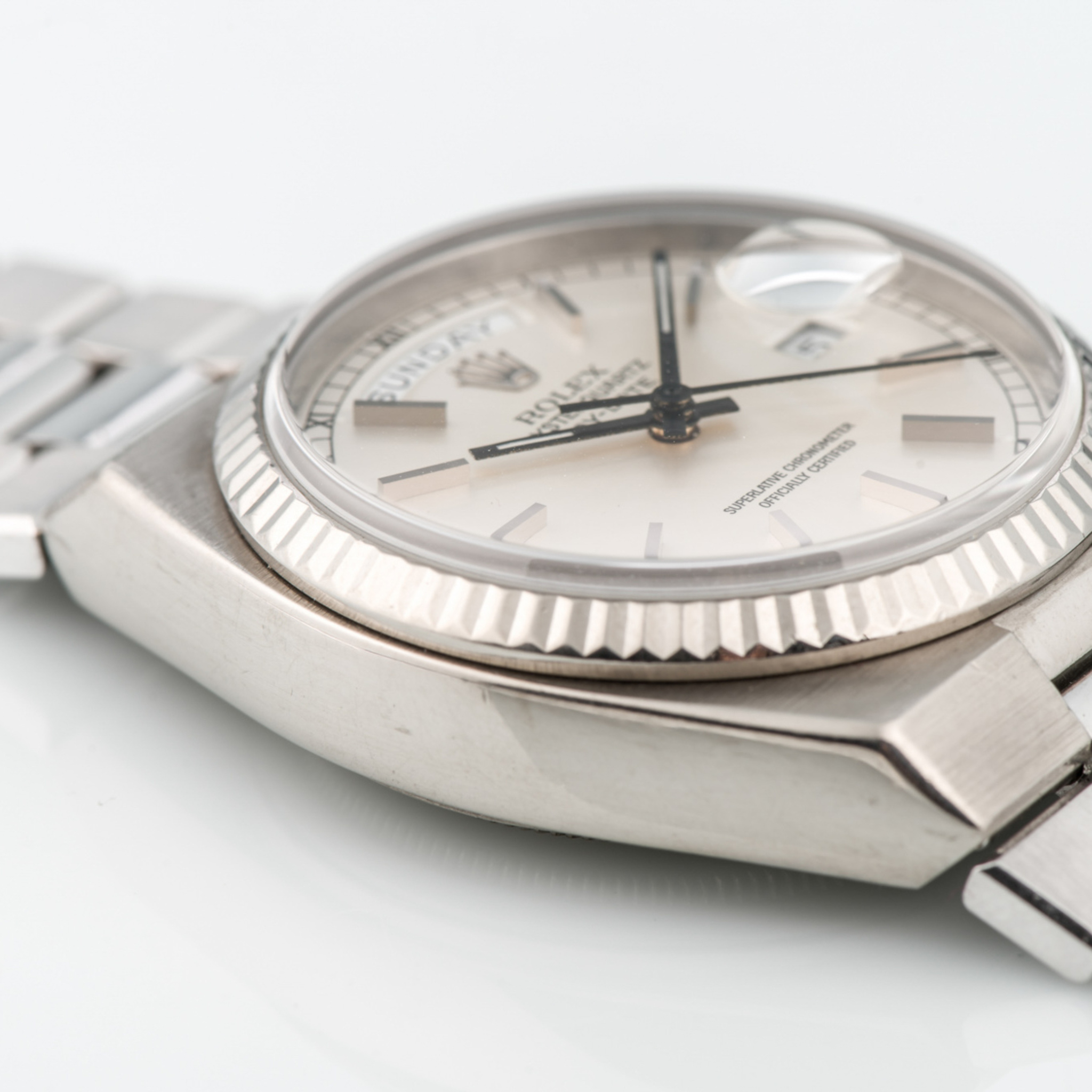 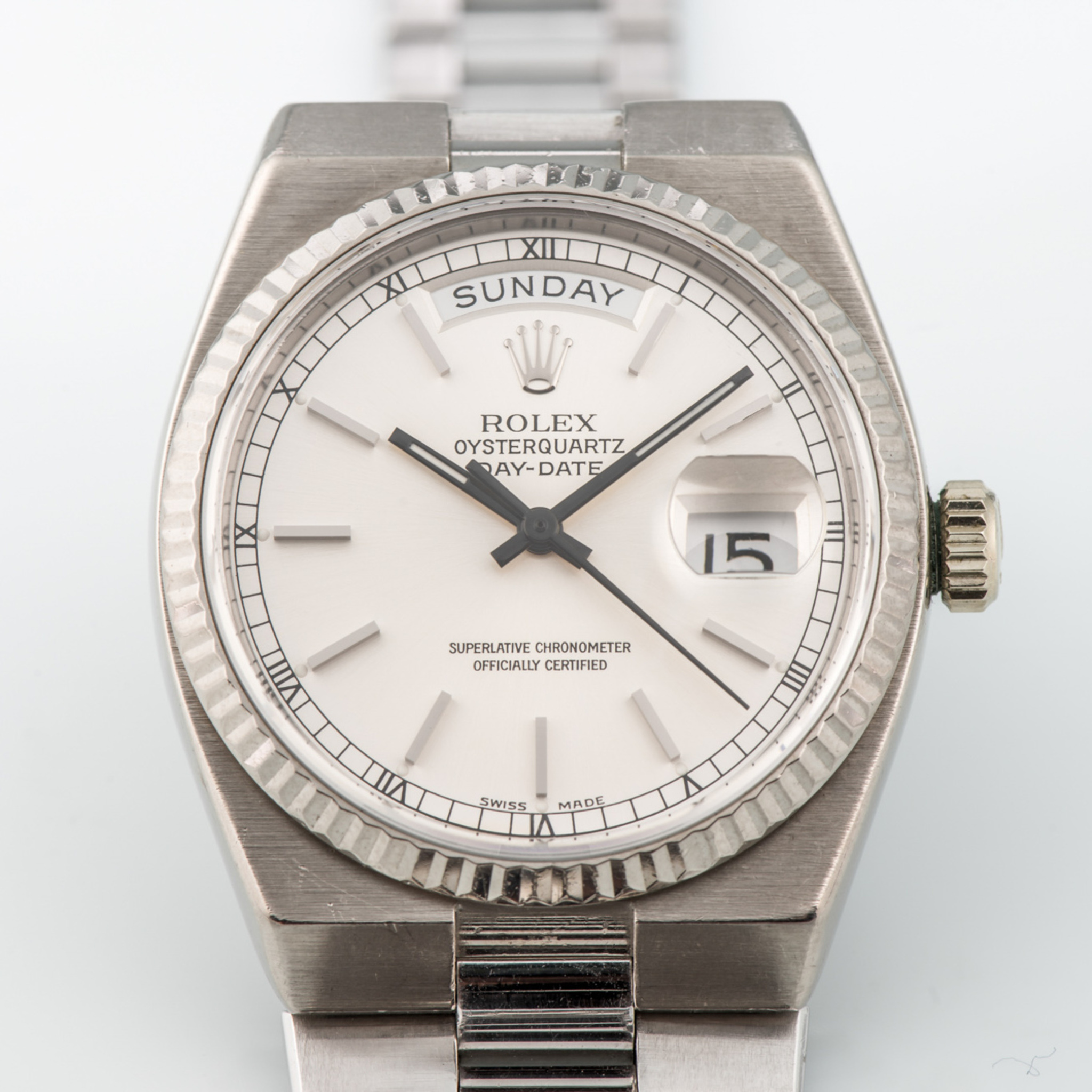 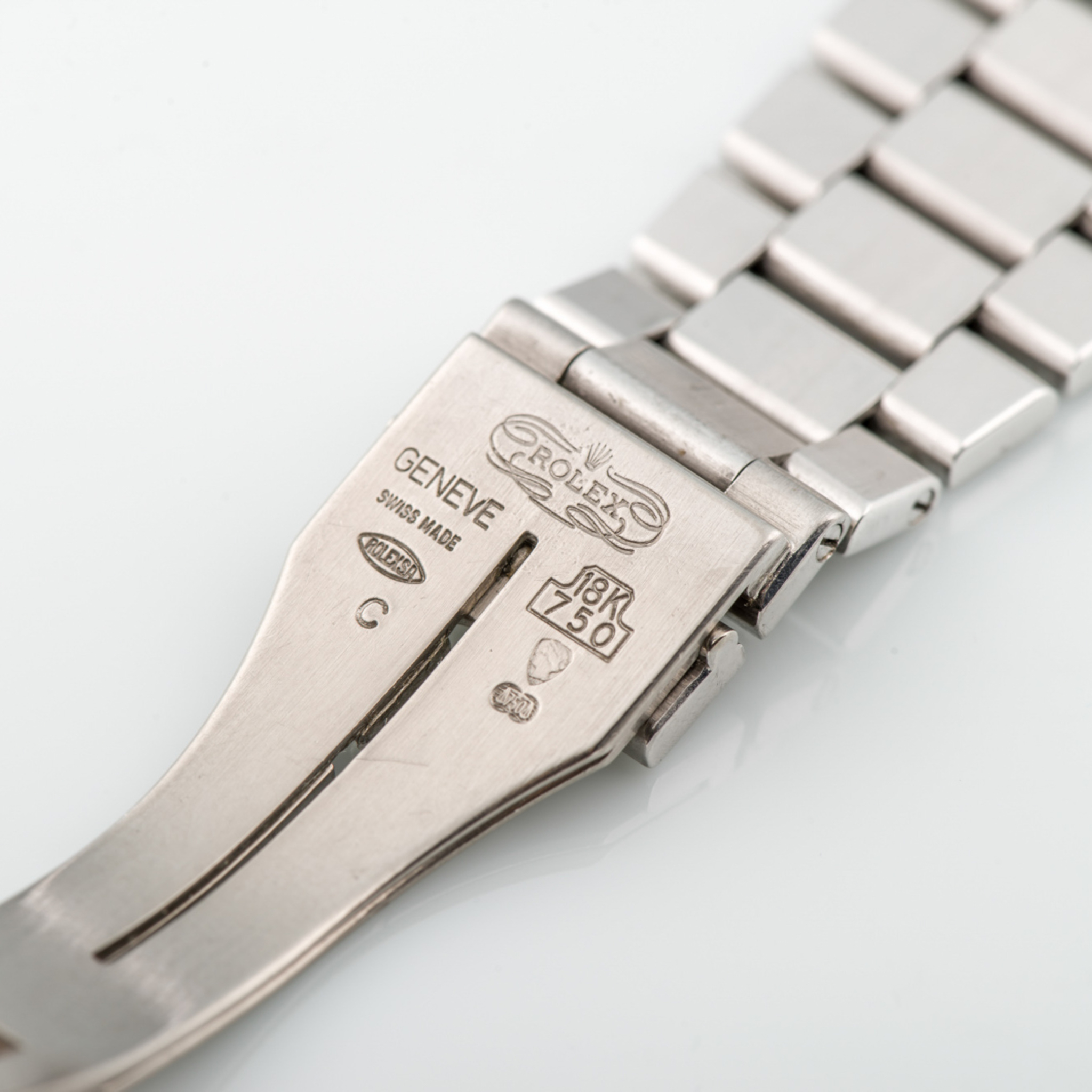 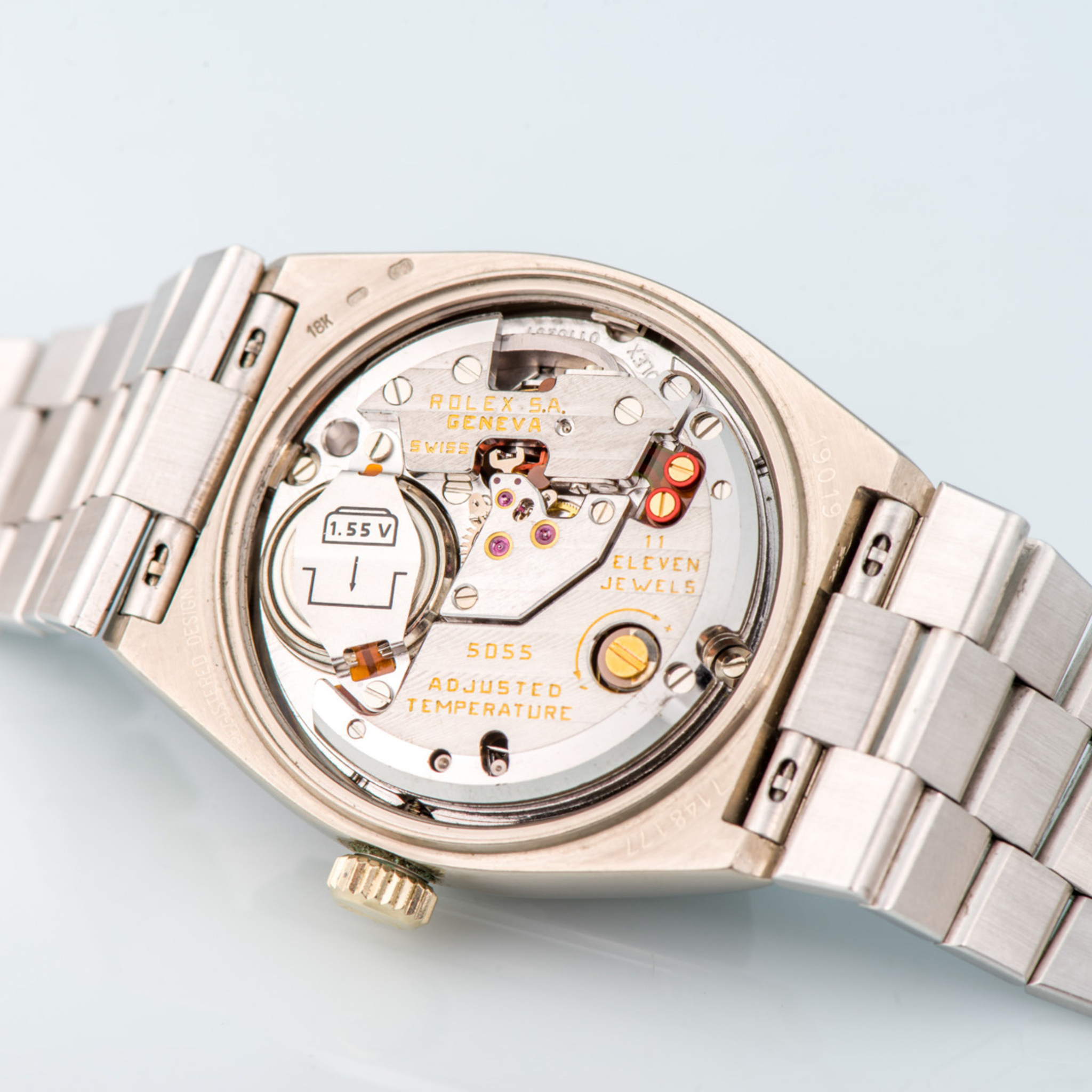 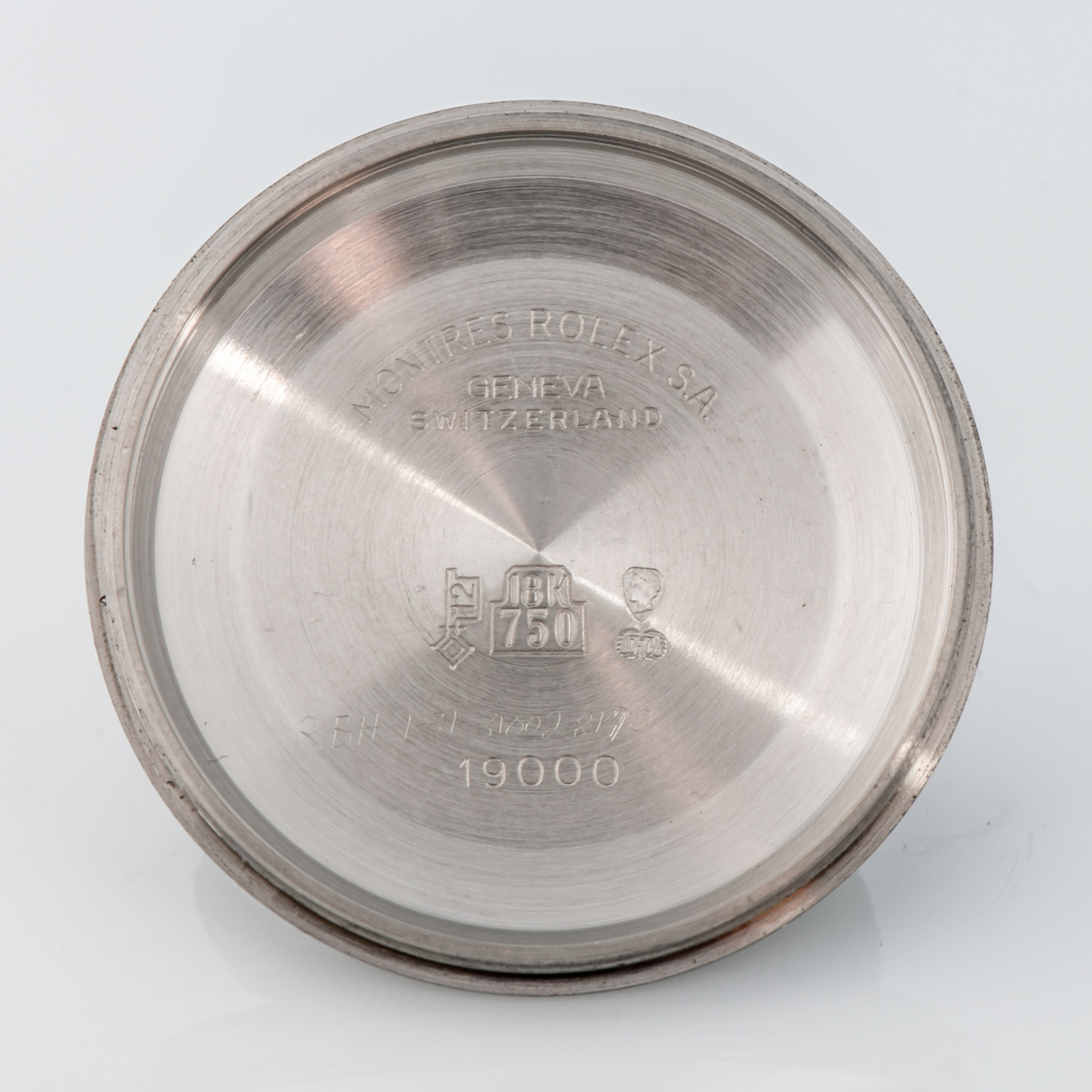 This wristwatch is one of the so-called “Youngtimers”, vintage watches that were relatively commercially successful at the time, but are so appreciated for their degree of ‘coolness’ today. One of these watches is undoubtedly the “Queen of Cool”, the Rolex “Oysterquartz” “Day-Date”.
At the end of the 1960s, as electronic technology moved forward, Rolex began research into producing its own quartz watches, along with a new case design. The Geneva-based company even joined forces with the Hoffman-La Roche group (now Roche) to research technologies for digital displays.
The early 1950s saw the development (notably at LIP and Hamilton) of watches with electromechanical movements. Rolex was already interested in this technology and filed its first patent in 1952. Between the end of the 1960s and the end of the 1980s, the company filed a series of patents relating to electric and electronic watches.
In terms of the physical production of watches, everything began in 1970 with the Beta 21 calibre. This was one of the world’s first quartz wristwatches developed by the Centre Electronique Horloger in Neuchâtel. The Swiss response in “Research and Development” to this new Asiatic trend. The CEH comprised sixteen Swiss horological companies (including Rolex, Patek Philippe, Piaget, Omega, Enicar, etc.). With this movement, Rolex commercialised in 1972 its first quartz watch, the “Quartz Date”, fitted with the calibre 5100; an impressive gold watch whose production was limited to 1 000 examples.
Rolex then develops and manufactures its own quartz movements, the calibres 5035 and 5055, with a 32 KHz oscillator and a thermo-compensated quartz that ensures extreme precision to the watch. These calibres will be used in the “Datejust” and “Day-Date” versions.
--

*a 20% import VAT is due on the hammer price with buyer's premium, plus 150€ for termination of temporary export, at buyer's expense, only if it is delivered within the EU