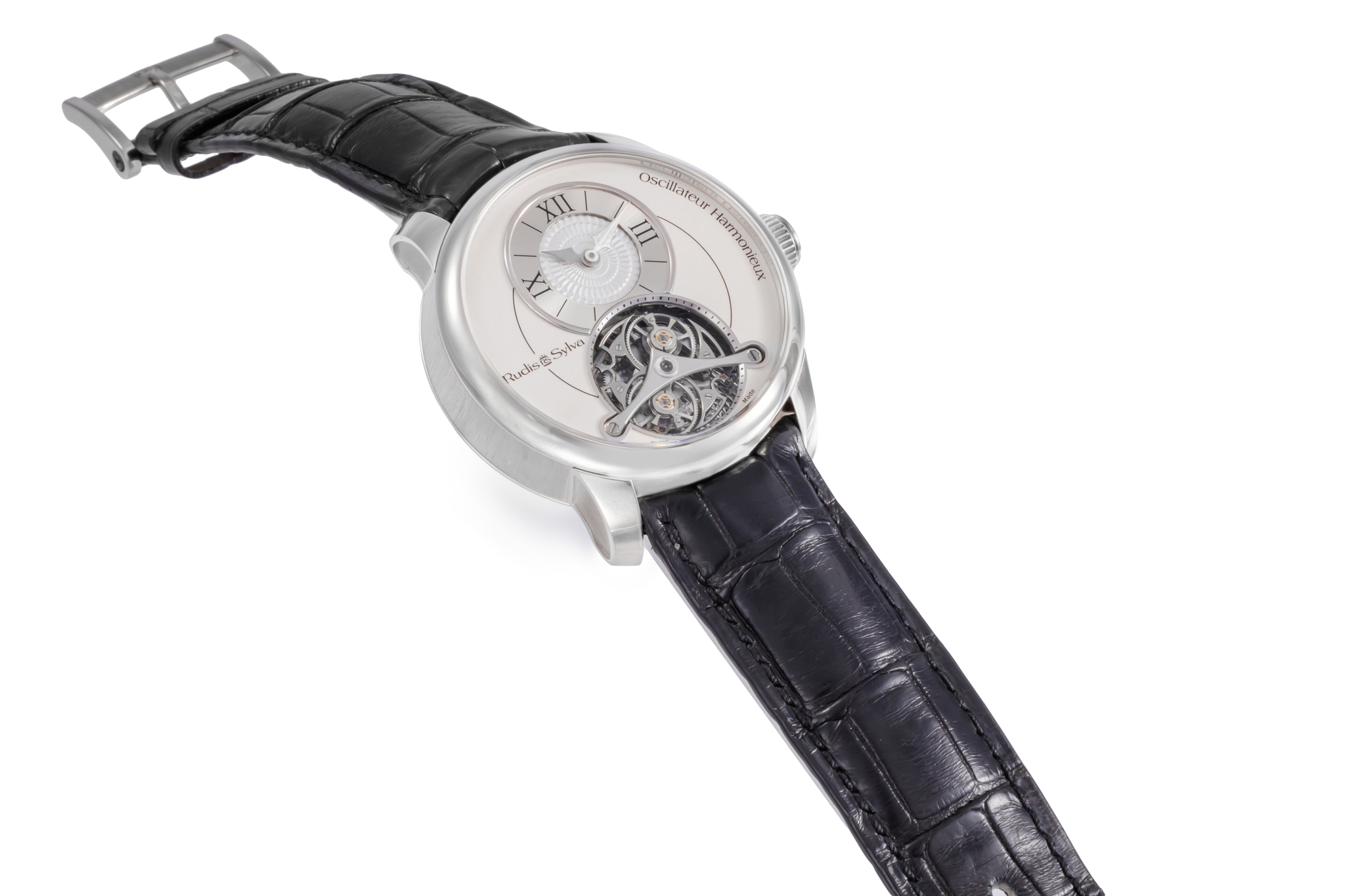 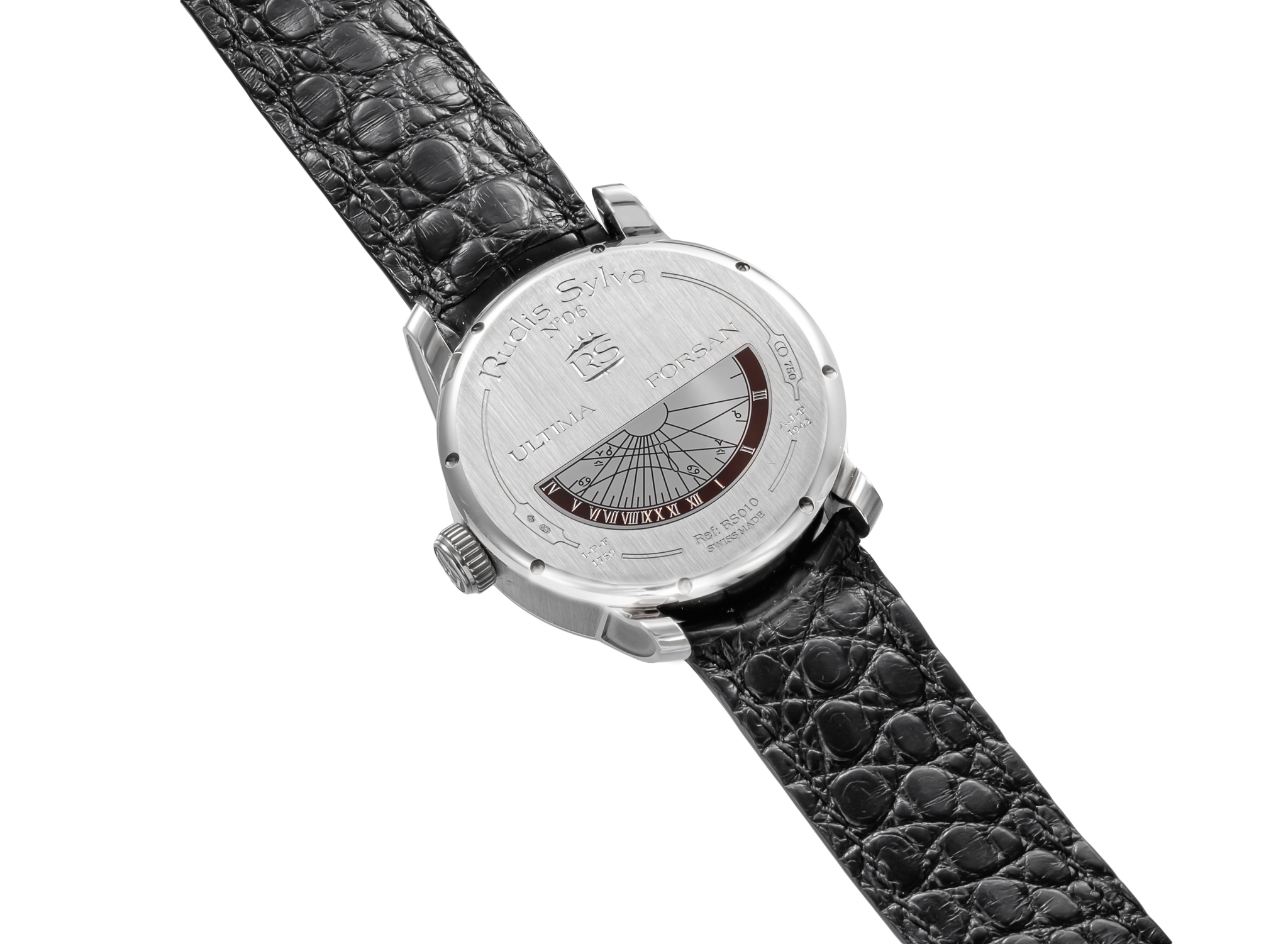 Last retail price known: HKD 2,170,000
Antiquorum is pleased to offer for the very first time at public auction two timepieces from the Rudis Silva Haute Horlogerie manufactory.
Rudis Sylva, “Harmonious Oscillator”
When Rudis Sylva’s “Harmonious Oscillator” was presented at BaselWorld in 2009, a number of watchmakers stated that the invention was as important as the tourbillon of Abraham-Louis Breguet (1747-1823) made more than 200 years ago (patent of 1801)!
In this device, there are two toothed balances mechanically connected to each other and driven by a single escapement.
• Linking the balances guarantees the same amplitude to both regulating organs and instantly eliminates the effect of gravity in the vertical position (it should be noted, however, that the balance teeth are profiled to generate minimal friction).
• In addition, the symmetry and energy of the hairsprings are permanently opposed, allowing instantaneous average correction in the vertical position (note that these hairsprings are mounted symmetrically and, on the other hand, unfold asymmetrically; when one unfolds, the other narrows, and vice versa).
• Everything is mounted in a cage (tourbillon or carrousel type) which rotates for 60 seconds (21 600 vibrations per hour; 3 Hz).
The result is a more precise adjustment, despite the fact that this technical innovation runs counter to the watchmaking theories that have always ruled out all constraints on the balance wheel.
As a general rule and as long as he is in a totally stable situation, a watch movement equipped with a tourbillon regulator needs one minute (i.e. the full rotation of the regulating organ) to compensate for the effects of gravity when it is in a vertical position. It can be seen here that the “Harmonious Oscillator” allows instantaneous correction thanks to the connection of the balances to each other and the asymmetrical deployment of the hairsprings; it is therefore never influenced by the Earth’s attraction.
It can therefore be seen that:
• In contrast to resonance oscillators, no diachrony is possible thanks to the gearing and the influence of gravity on one of the balances is permanently cancelled out by its influence on the other.
• While a tourbillon is on average accurate over one minute, the “Harmonious Oscillator” is accurate at all times.
Another advantage of the system:
• The loss of oscillation amplitude of the balances when moving from the flat position to the vertical position (the famous “flat-hanging”) is minimal: only 10°, for a commonly accepted deviation of 30° on a conventional exhaust system.
The “Harmonious Oscillator” remains today at the top of the pyramid of watchmaking inventions fighting against the effect of the Earth’s gravity.
Based on an idea by watchmaker Romain Gillet, it was brought to fruition by Mika Rissanen, a Finnish-born watchmaker specialising in horological Grand Complications working for the Rudis Sylva S.A. brand (the latter is considered to be the inventor on Swiss invention patent No. 700 747 A1).
In 2011, a new development of the “Harmonious Oscilator” is realised with a power reserve that increases to 70 hours (instead of 43) and a titanium cage.
Since its creation in 2009, the model has been available in different references: RS 05 (rectangular shape, with “big date”; RS 10 (round shape); RS 12; RS 14; RS 16; and, as a special custom order (also as a pocket watch).
The Rudis Sylva watchmaking factory created in 2006 in Les Bois (Franche Montagnes) is one of the independent brands that carry out all of its production in its workshops, requiring the use of a few subcontractors for a few rare components. This brand was founded by Laurent Frésard, Fabrice Thueler and Jacky Epitaux.
The name “Rudis Sylva” comes from Jean Ruedin (a man of the 14th century from the shores of Lake Neuchâtel; one of the first settlers of these regions inhabited by firs and wolves) and Sylva which means “forest” in Latin; is the name that the village of Les Bois had at the end of the medieval period.
The words “Ultima Forsan” (perhaps the last one) and the sundial are those found on the facade of the farmhouse (dating from 1750) where the manufactory is located today.