18K yellow gold, hunting-case, keyless-winding, round-shaped, pocket clock-watch, with subsidiary seconds at 6 and three horological complication:
· Minute-repeater with carillon on three steel gongs by three hammers (activated by the rectangular push-piece located on the case-band at 6 o’clock)
· Grande Sonnerie (position lever of “Striking” and “Silence” protruding from under the bezel at 12 o’clock)
· Two barrels with differential gears and bidirectional-winding inspired by Louis-Elisée Piguet’s (1836-1924) works (according the patent of 1895)
Cover and case-back polished; gold cuvette (dome) engraved in taille-douce (fine cut) with the technical specifications of the movement.; second inner gold and glass cuvette (dome) allowing to see the movement.
White enamel dial with radial Roman numerals; blued steel “Spade” hands.
Around the dial, the scene, painted on polychrome enamel on gold, shows two Jacquemarts (Jacks), allegories of Art and Music, striking the elapsed time (the man representing Painting, on the right, strikes the hours, the second and the third stroke of the quarters while the woman, representing Singing, on the left, strikes the first stroke of the quarters, and then the minutes; the whole being animated by the repeating mechanism; underneath these two personages, two other small figures representing Sculpture and Musical instruments complete the scene.
Movement 20’’’ (ebauche probably by Louis-Elisée Piguet, le Brassus, Vallée de Joux), gilded brass, gold screwed-chatons (setting), straight-line lever escapement, cut bimetallic compensated balance with gold poising screws and blued steel hairspring with terminal curve, polished steel index regulator; repeater work on the main plate, under the dial, with patented silent centrifugal force governor to regulate the speed of the repetition mechanism. 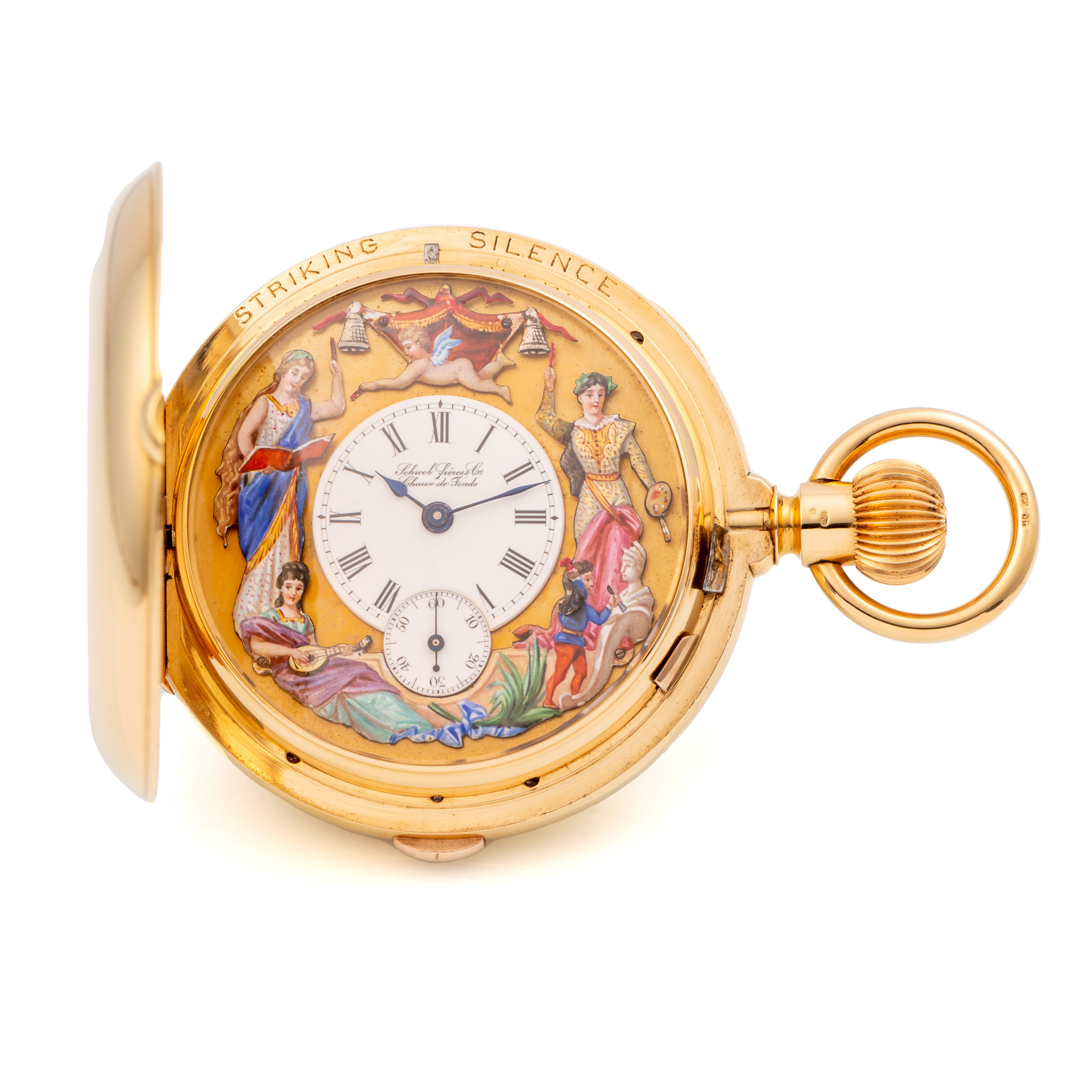 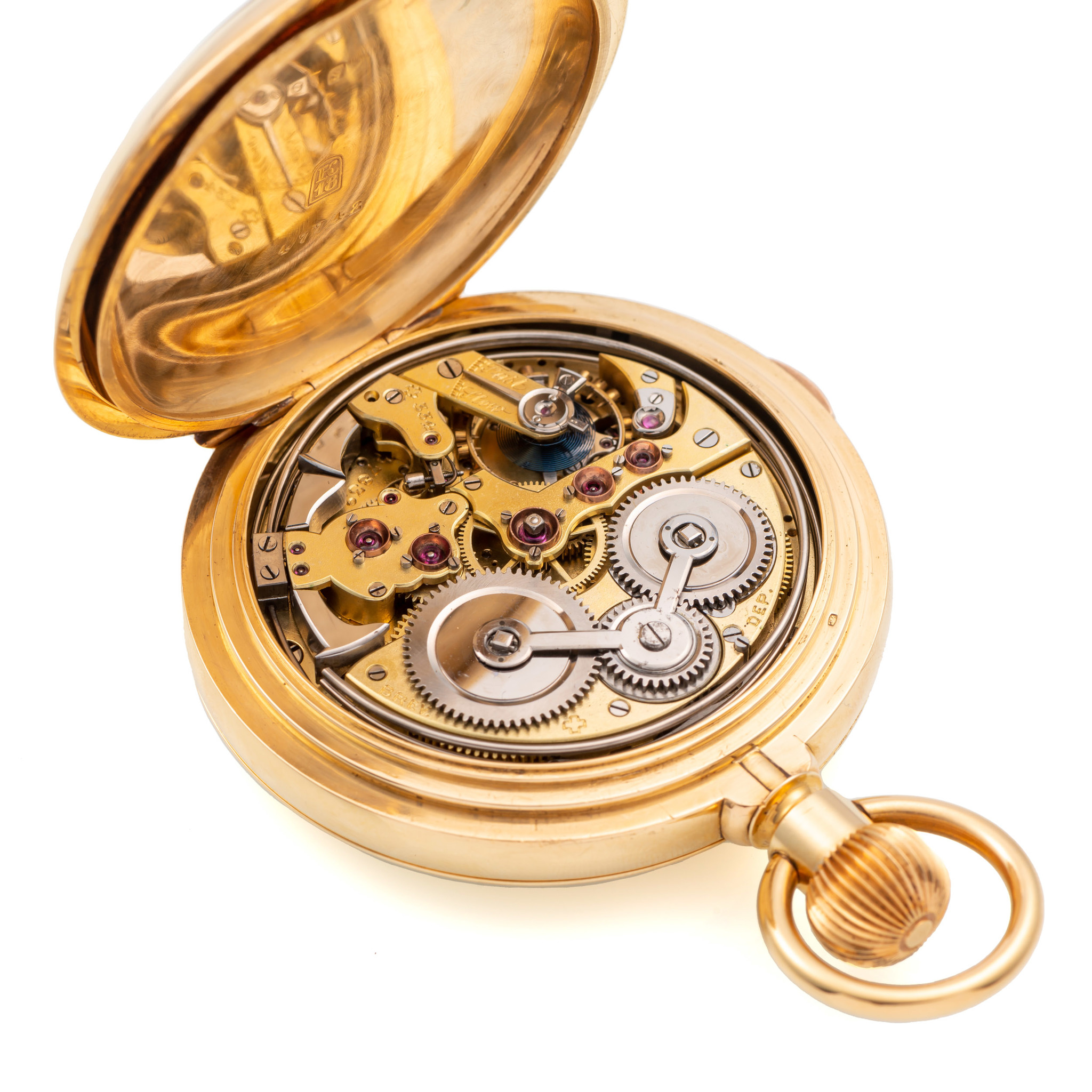 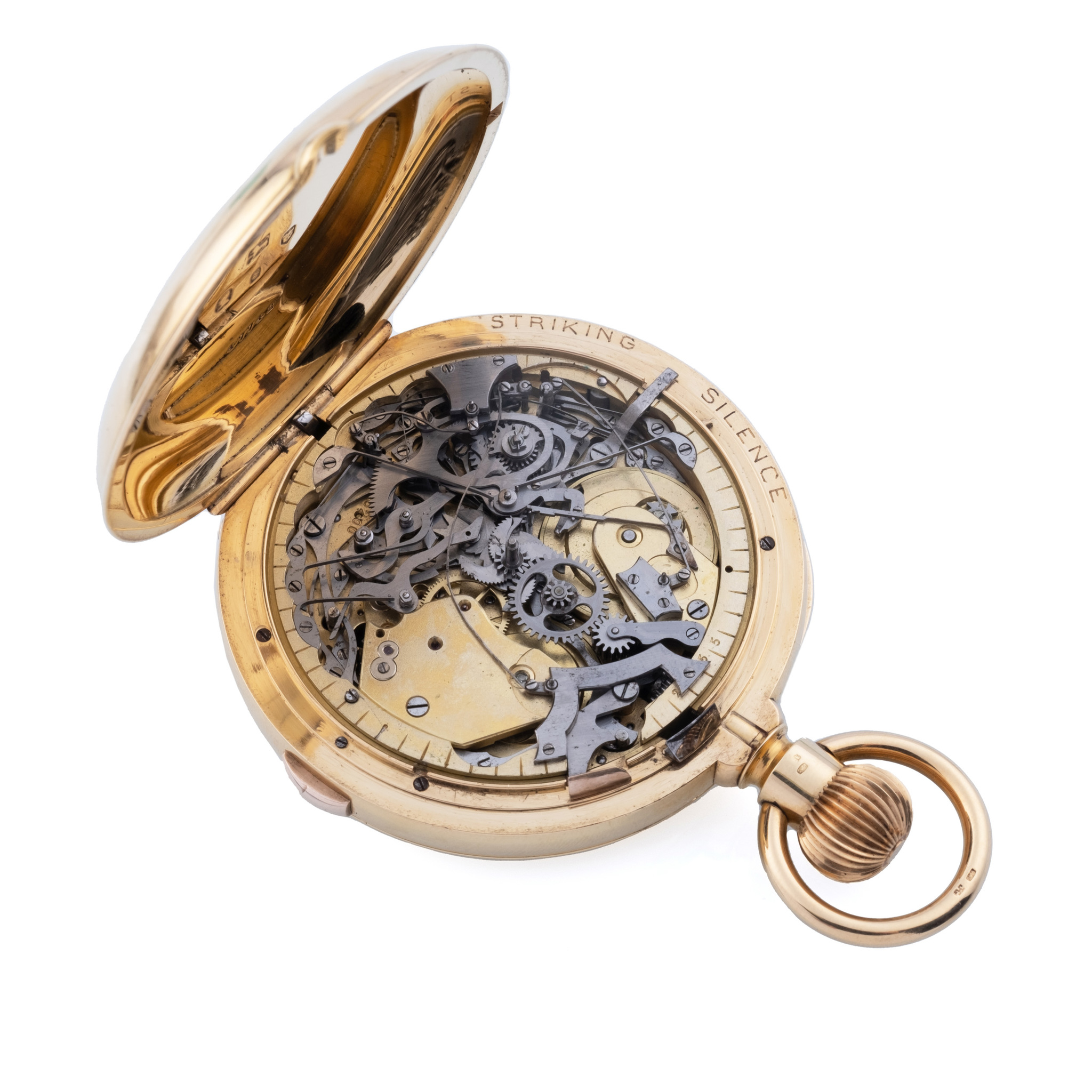 It is interesting to note that this watch, signed by Schwob Frères & Co. in La Chaux-de-Fonds, incorporates various patents from watchmakers who have marked the history of horology. It is known that Louis-Elisée Piguet (1836-1924) of Le Brassus (Vallée de Joux) worked extensively as a supplier of movements to Charles Barbezat-Baillot (1847-1938) of Le Locle. Barbezat-Baillot worked with the Brandt company of Bienne / Biel (the future Omega), and later with César Racine (1851-1931) and the Zenith factory of Le Locle, in the production of his Grande Sonnerie and carillon watches. All this reflects how watchmaking was in those days when many different players were involved. In this case, Schwob Frères & Co. is the company that commissioned the watch but not the one that made it.
--
Movement based on the Swiss invention patent No. 334, delivered on January 8, 1889, to Charles Barbezat-Baillot, Le Locle, for a “Perfectionnements apportés à la construction des mécanismes de répétition pour montres de poche de toutes dimensions” (Improvements to the construction of the mechanisms of repetition for pocket watches of all sizes); this patent includes in particular the centrifugal force regulator to regulate the speed of the repetition mechanism.

--
Louis Brandt & Frère, Bienne / Biel, predecessor of Omega Watch Co.
Omega is a Swiss watch manufacturer founded by Louis Brandt (1825-1879) in 1848 in La Chaux-de-Fonds (canton of Neuchâtel). In 1877, the watchmaking company became “Louis Brandt & Fils”. On his death, his two sons – Louis-Paul Brandt (1854-1903) and César Brandt (1858-1903) – decided to launch into industrial production “in the American style”, i.e. in large series; the company name remained “Louis Brandt & Fils”.
In 1880, they established themselves in Bienne / Biel (canton of Bern) and launched their first calibre manufactured in large quantities in 1885; it was called “Labrador”. In 1891 the company name became “Louis Brandt & Frère”. In 1894, they produced a 19’’’ calibre (lines), called “Omega” (named after the Greek letter which was later to become the brand’s logo).
Following the phenomenal success of this watch, in 1903, and following their deaths, the company was transformed into a limited company under the name “S.A. Louis Brandt & Frère – Omega Watch Co.”. Paul-Emile Brandt (1880-1954), son of Louis-Paul Brandt, took over the technical management of the company, together with his brother Adrien Brandt and his cousin Gustave Brandt.
Thus, was born Omega, one of the greatest adventures in the history of watchmaking.
--