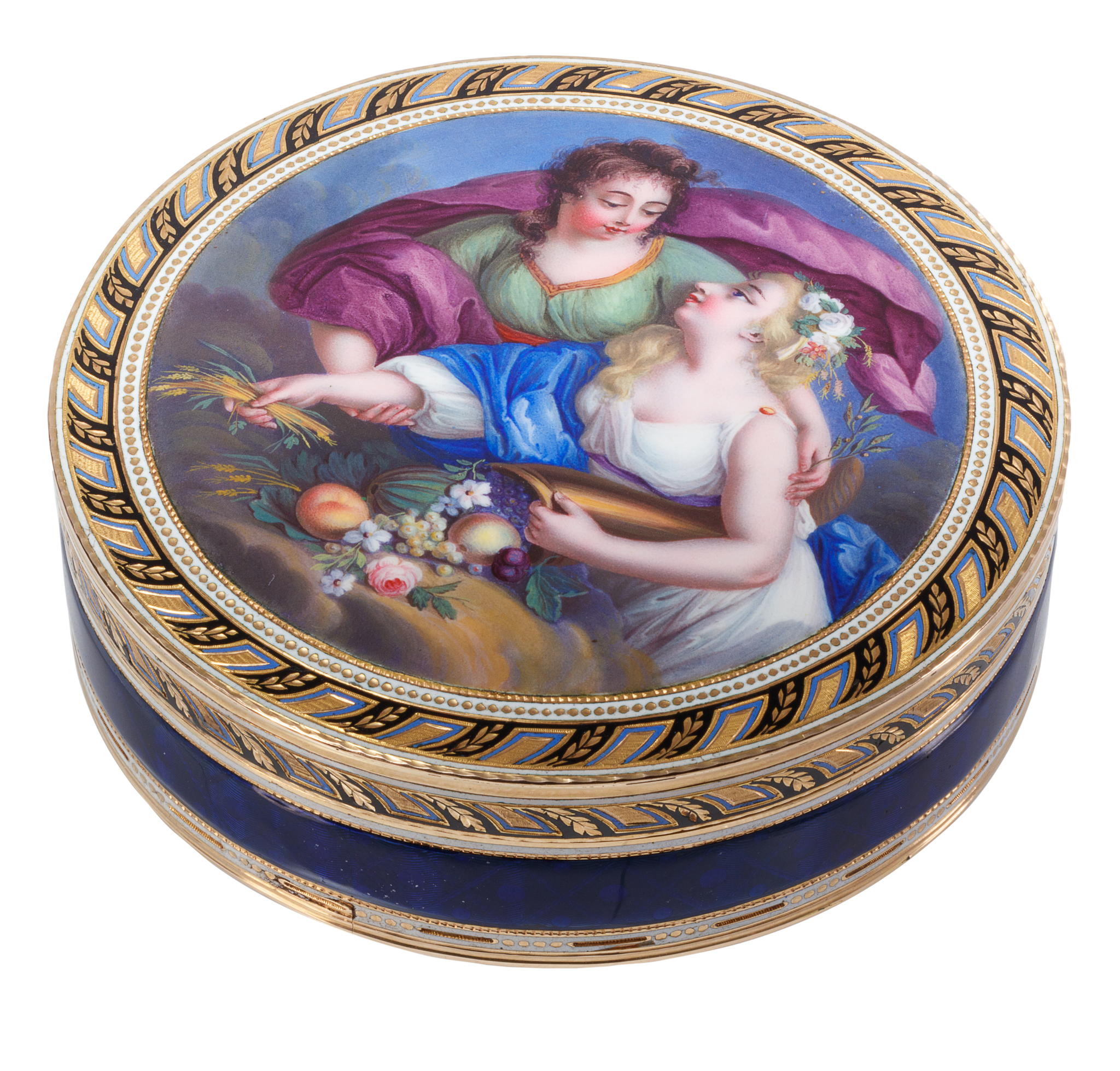 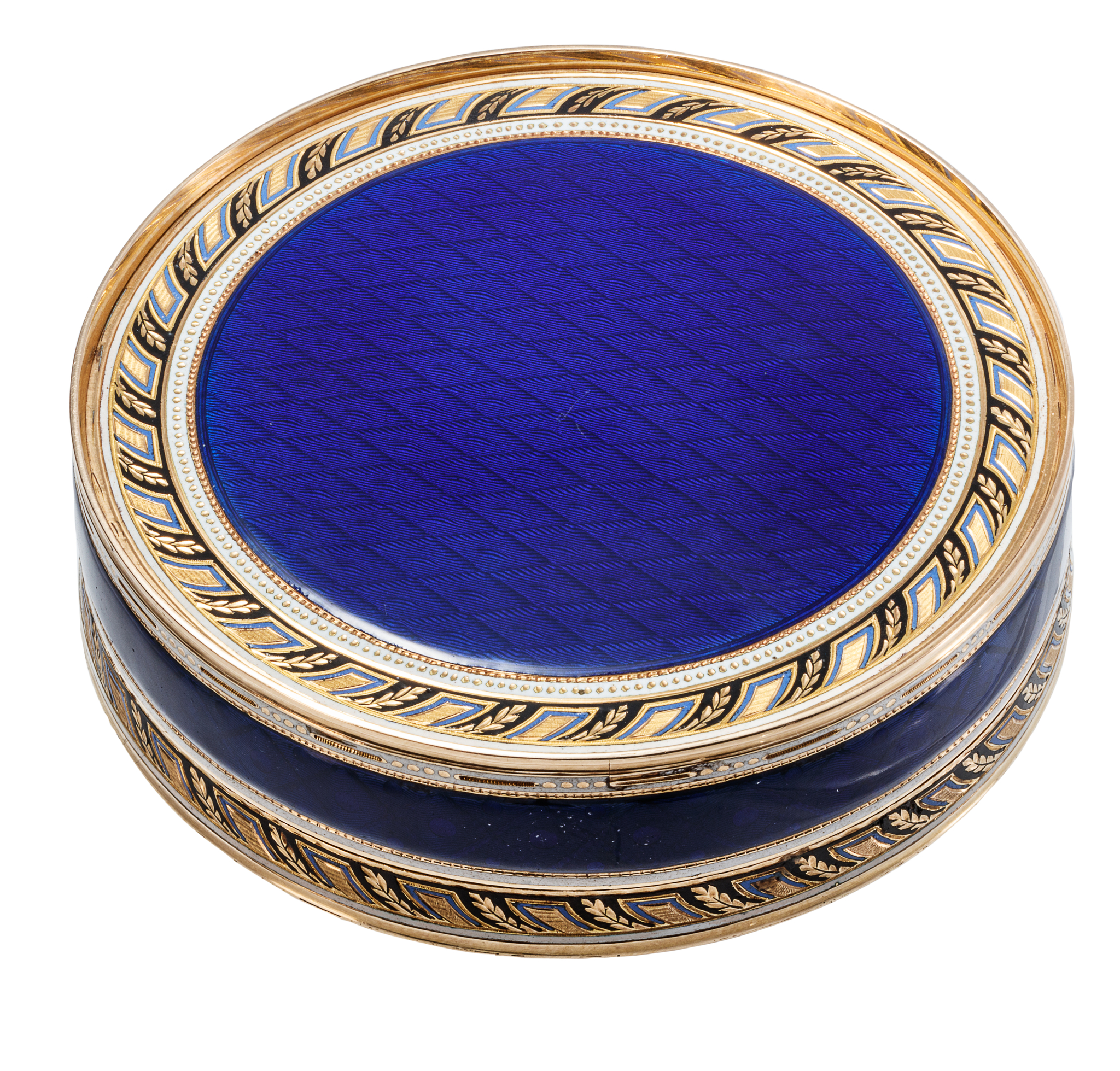 "La Paix qui ramène l'Abondance" (Peace bringing back Abundance) Wishing to gain admission to the Académie royale de peinture et de sculpture in 1783 as a history painter, Marie-Louise-Elisabeth Vigée-Lebrun (1755-1842) presented this allegory as her reception piece. At the time, historical, mythological, religious, and allegorical subjects were considered superior to all others (portraiture, genre, landscape, and still life). With the American Revolution just ended, the artist's choice was timely. The future is symbolised by Peace, on the right, who is ushering in Abundance with her cornucopia of fruit. Soiron, Jean-François (1756-1812) A miniaturist and painter on enamel who specialised in portraits and landscapes, and who often decorated watch cases. Soiron was born in Geneva, on August 18, 1756, and was apprenticed to Jacques Teulon in Geneva from 1768 to 1773. He entered into partnership with David Frainet and Etienne Frégent and later, from 1788 to 1794, became a partner of Jean-Alexandre Grand. Soiron taught several apprentices, among them: François Gerbel, in 1775; Groud, in 1778; J.-L. Fournier, in 1779; P.-A. Marguerot and Antoine Gillet, in 1783; Jean-Louis Henry, in 1784; François Chappuis, in 1792, and finally L. A. Fabre, with whom he became associated in 1796. That association was to last only a year. In 1799, he is known to have been a member of the Genevan Société des Arts. He emigrated shortly afterward to Paris, where he established his own business in 1800. At the Paris Salon of 1800, he exhibited three portraits and a vase of flowers; he also exhibited in 1801. In 1804, several portraits by Soiron were exhibited in the same Salon, and in 1806 he presented a fine portrait of Napoleon on horseback and one of Vivant Denon. In 1808, Soiron exhibited portraits of Napoleon and Josephine as well as several enamel paintings and, for the last time in 1810, portraits and enamel scenes. In 1802, Soiron also worked for the Sèvres porcelain factory. During the last two years of his life, Soiron was short of money and in ill-health. He died in Paris in 1812. Lissignol, Jean-Abraham (1749-1819) Born in Geneva on May 1749; died in Plainpalais on June 28, 1819. He is one of the best enamel painters of the later part of the 18th century, he was the pupil of Jean-Marc Roux and later became his partner. He specialised in decorating enamelled snuffboxes and watch-cases, working for Jaquet-Droz, Leschot, the Rochat brothers, and John Rich. Séné & Détalla The partnership of the Genevan goldsmiths Philippe Séné and Détalla must have existed before 1795 and was most likely dissolved in 1805. In 1798, Séné had formed a partnership with his brother-in-law, Henry Neisser, who had moved from Hanau to Geneva in 1783 and the company was renamed to Sené & Neisser in October 1805. Philippe Sené died in November 1807 and in 1808 Neisser registered his own master's mark.