18k white gold, self-winding, round-shaped, water-resistant wristwatch, case-back with 6 screws, subsidiary seconds at 9 and 7 horological complications: Perpetual calendar, Date of the month (double aperture at 1 o'clock), Day of the week (aperture at 9 o'clock; in English), Month of the year (aperture at 3 o'clock; in English), Vintage of the year (double aperture at 6 o'clock), Two-time zone (hour hand adjustable with the two pushers at 4 and 8 o'clock), Diurnal (day-time) an.cturnal (night-time) hours with a 24-hour scale (central hour hand) 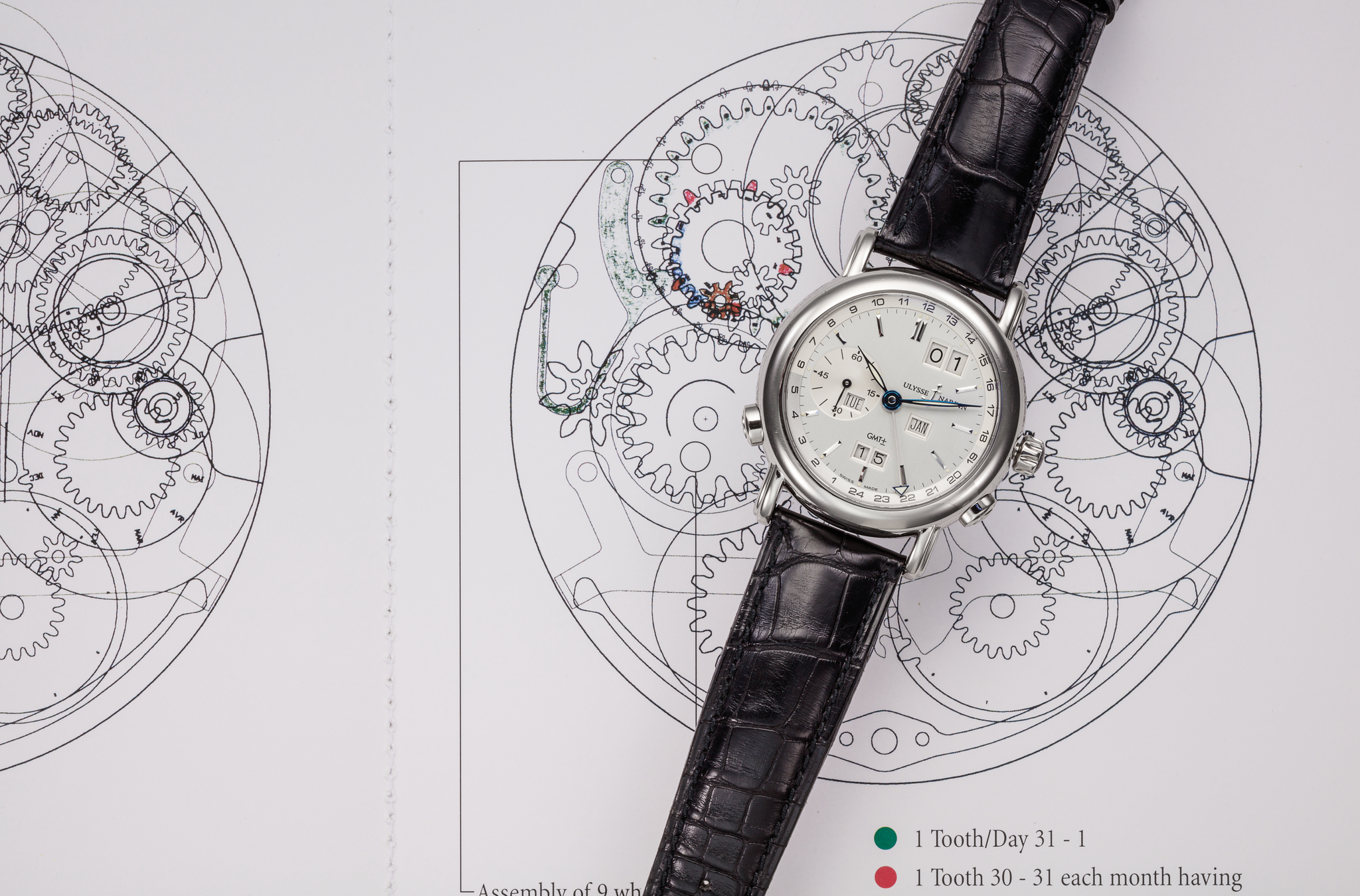 Ulysse Nardin, “Ludwig” Perpetual Calendar and GMT ± Ulysse Nardin’s “Perpetual Ludwig” calendar – a revolutionary invention of Dr Ludwig Oechslin – was launched in 1996. The watch incorporates Swiss invention patent No. 680 630 (April 17, 1991) to quickly adjust the functions of the calendar (date of the month, month of the year and millesimal of the year), both forwards and backwards, only with the winding crown (instantaneous jump); the day of the week is corrected by turning the hands in one direction or another (semi-instantaneous jump). On October 12, 1996, to celebrate the 150th Anniversary of Ulysse Nardin, Antiquorum, in a thematic auction dedicated to this manufacture, auctioned the “Perpetual Ludwig”, No. 1, in a platinum case (lot 165, sold for the amount of CHF 52 900.-). In 1999, Ulysse Nardin introduced the GMT ± Perpetual, which combines the calendar mechanism with another Oechslin’s invention, the “GMT ±”. The watch incorporates the Swiss invention patent No. 685 965 (February 23, 1994) to give the time of a second time zone, with adjustment of the hour hand (in steps of one hour) by two pushers the making either “+” advance (at 8 o’clock) or “-” back (at 4 o’clock), this without interfering with the running of the watch; this hour hand is used at local time. A central index of the hours indicates the diurnal (day-time) and nocturnal (night-time) hours (so it is a turn in 24 hours). These pushers also allow faster correction of the day of the week. The watch also incorporates a third Swiss invention patent, No. 688 671 (May 15, 1995), for displaying the “grande” (oversize) date of the month, allowing easy reading of it. At the time, the GMT ± Perpetual was probably the most complex wristwatch ever made. For more information. https://www.ulysse-nardin.com/portraits/portrait-ludwig-oechslin https://www.ulysse-nardin.com/news/classic-perpetual-ludwig