"SETTING OUT OF THE FAIR" Unsigned, the enamel attributed to Jean-Louis Richter, Geneva, circa 1800. Magnificent and extremely rare, 18K gold, enamel and pearl-set, centre-seconds watch, designed as a urn, made for the Chinese Market.

Three-body, in the shape of an scalloped flask; the band, rim of the back and shaped foot with blue, black and white champlevé enamelled decoration; the back with a very fine painted scene featuring a couple of lovers with an old lady giving advice in the background, after the painting "Setting out of the Fair" of Francis Wheatley (1747-1801), RA, engraved by Francis Egington (1737-1805) and published in 1792, against a blue translucent enamel over guilloché engine-turning; the front cover with split-pearl set border and bezel, painted enamel scene above the dial, depicting a young child playing with a dog; the base fitted with a seal; gold canted corners rectangular hinged cuvette (back-dome) with blue and gilt champlevé enamelled decoration; rose gold fausse-plaque engraved in taille-douce with foliage. White enamel with radial Roman numerals and outer Arabic quarter-minute and seconds ring. Gold skeleton "urn" hands; equilibrated centre- seconds hand. 63 x 37 mm. Canted corners rectangular-shaped, frosted gilt brass, the plates engraved in taille-douce with foliage, large going barrel, cylinder escapement, plain brass three-arm balance, blued steel flat balance spring, polished steel endplate with index regulator. 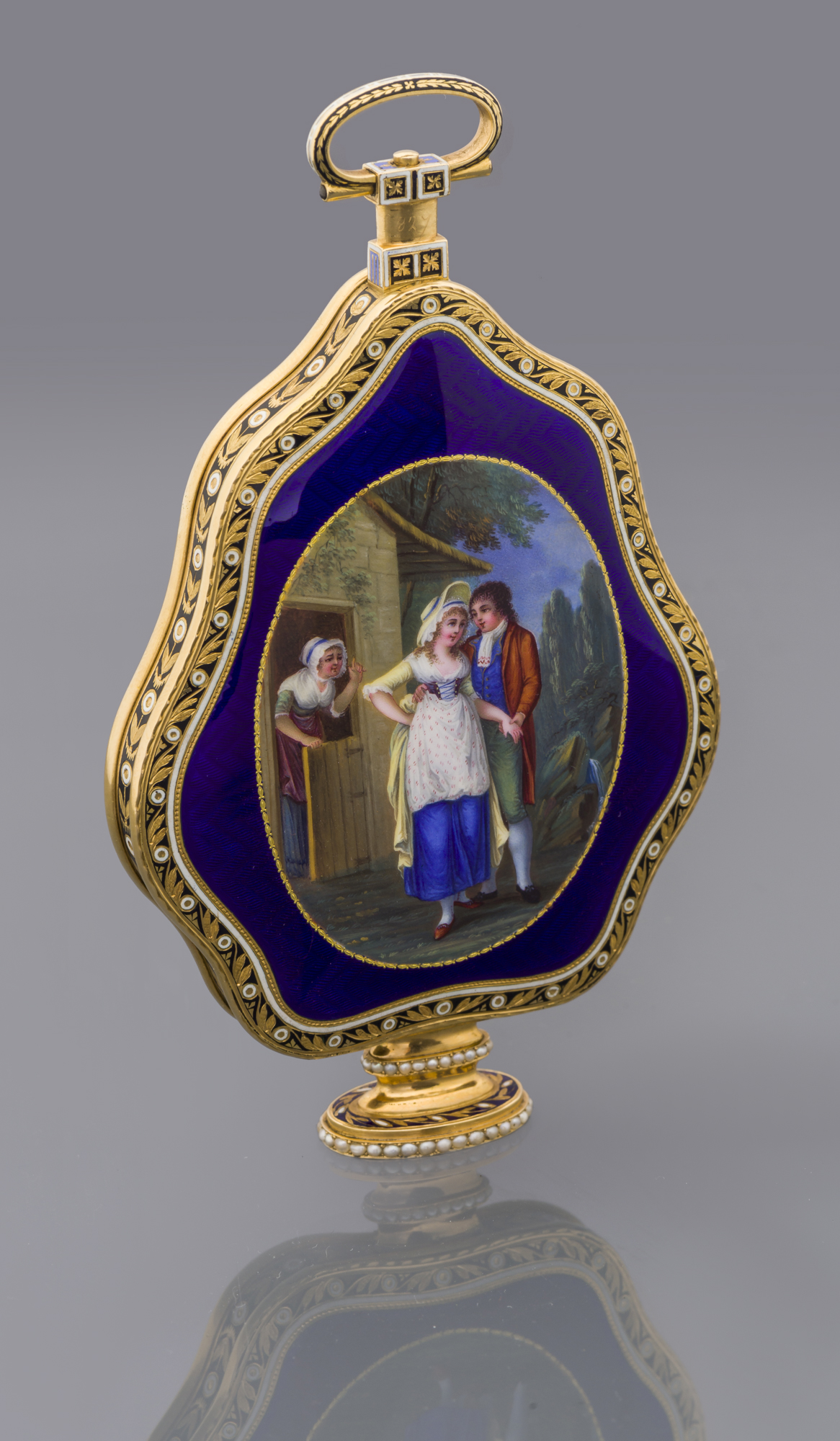 DIM. 110 x 67 mm. "Setting out to the Fair" Is a print, coloured stiple engraving, after a painting of Francis Wheatley (1747-1801), RA, by Francis Eginton (1737-1805), published by Jee and Eginton, in 1792. The scene showing probably the mother in the doorway giving a last advice to the lovers when they set out to the fair. The young man cap in hand bids her Farewell (detail not taken up by the painter on enamel). This print was published in the same time that "The Fairings" showing probably a mother sitting in a room at the window with a book on her lap, the two lovers stand to her right. Notes The charming painted enamel scene decorating the present watch derives from English genre paintings by artists from the Royal Academy, such as William Hamilton (1751-1801), RA, Francis Wheatley (1747-1801), RA William Redmore Bigg (1755-1828), RA, etc., who specialised in images of romanticised English rural life in the last quarter of the 18th century. Their paintings were engraved by Francesco Bartolozzi (1727-1815), William Peltro Tomkins (1760-1840), Thomas Burke (1749-1815), John Raphael Smith (1752-1812), Henry Gillbank (fl. late-18th-early 19th c.), etc., and sold as prints which were published by John Boydell (1719-1804) and Josiah Boydell (1752-1817), engravers and printsellers, James Daniell (fl.1771-1814) and others. These genre prints were enormously popular and were used as models for Geneva enamellers, including Jean-Louis Richter (1766- 1841). Urn-shaped watches of this type, fitted with a seal foot, are extremely rare and rarely appear on the art market. The movement, although made in Geneva is very much inspired by the English style with its engraving. Very few examples of this type of luxury watches - only five examples known today including this one, of which one is kept in Geneva in the Patek Philippe Museum -, with slightly differences of shaped, most certainly made for the Chinese market, exist: Sotheby's, London, auction, October 1st, 1997, lot 71.Patek Philippe Museum, Geneva, Inv. S-324. Antiquorum, Hong Kong, auction, June 9, 1997, lot 425, for the amount of HKD 768 000.- (including buyer's premium). Antiquorum, Hong Kong, auction, June 9, 1997, lot 426, for the amount of HKD 614 000.- (including buyer's premium); Christie's, Geneva, auction, November 15, 2010, lot 90, for the amount of CHF 147 000.- (including buyer's premium). Antiquorum, Hong Kong, auction, June 9, 1997, lot 427, for the amount of HKD 428 000.- (including buyer's premium); Antiquorum, Hong Kong, auction, February 20, 2005, lot 229, for the amount of HKD 975 000.- (including buyer's premium). Jean-Louis Richter (1766-1841), Geneva Learned his art under David-Etienne Roux and Philippe-Samuel-Théodore Roux, becoming a most renowned enamel painter. His speciality was the painting of landscapes and particularly lake-side scenes and marine-scapes, often representing ships in a harbour or battles with fighting Men-of-War, but, on occasion, also portraits and hunting scenes. He did not often sign his work, but it is clearly recognised as being in his hand from the style and quality of the painting. He applied his art principally to watch cases and snuff-boxes and these were largely destined for the Chinese, Turkish, British and Italian markets. In 1828, he was in partnership with Aimé-Julien Troll (1781-1852) and one can find work signed Richter et Troll. Richter, like other great enamel painters of the time, often found inspiration for his work from paintings or engravings by the artists then in fashion particularly Claude Verne or the romanticised English and Irish rural life.