18K yellow gold, enamel and pearl-set, open-face, key-winding, round-shaped, “Directoire” pocket watch, made for the Chinese market, with automata: - Animated scene triggered upon request (activated by the button at 6 o’clock), with four functions Royal blue flinqué enamel (translucent enamel over guilloché engineturning) case-back; the dial-face showing a workshop of wine barrel makers in varicoloured gold, in front of a river landscape. The scene shows: on the centre, a cooper preparing a piece of wood (oak merrain); with, next to him, on the right, a barrel in preparation (consisting of douelles (staves) held using the assembly table) heating near a fountain in action (the craftsman subtly marries the properties of two elements that seem to be opposed – fire and water –, to give his identity to the barrel and de facto to the wine); on the left, another cooper knocks a rimmed barrel in order to finish the manufacture. In the left corner a faithful dog sleeps. 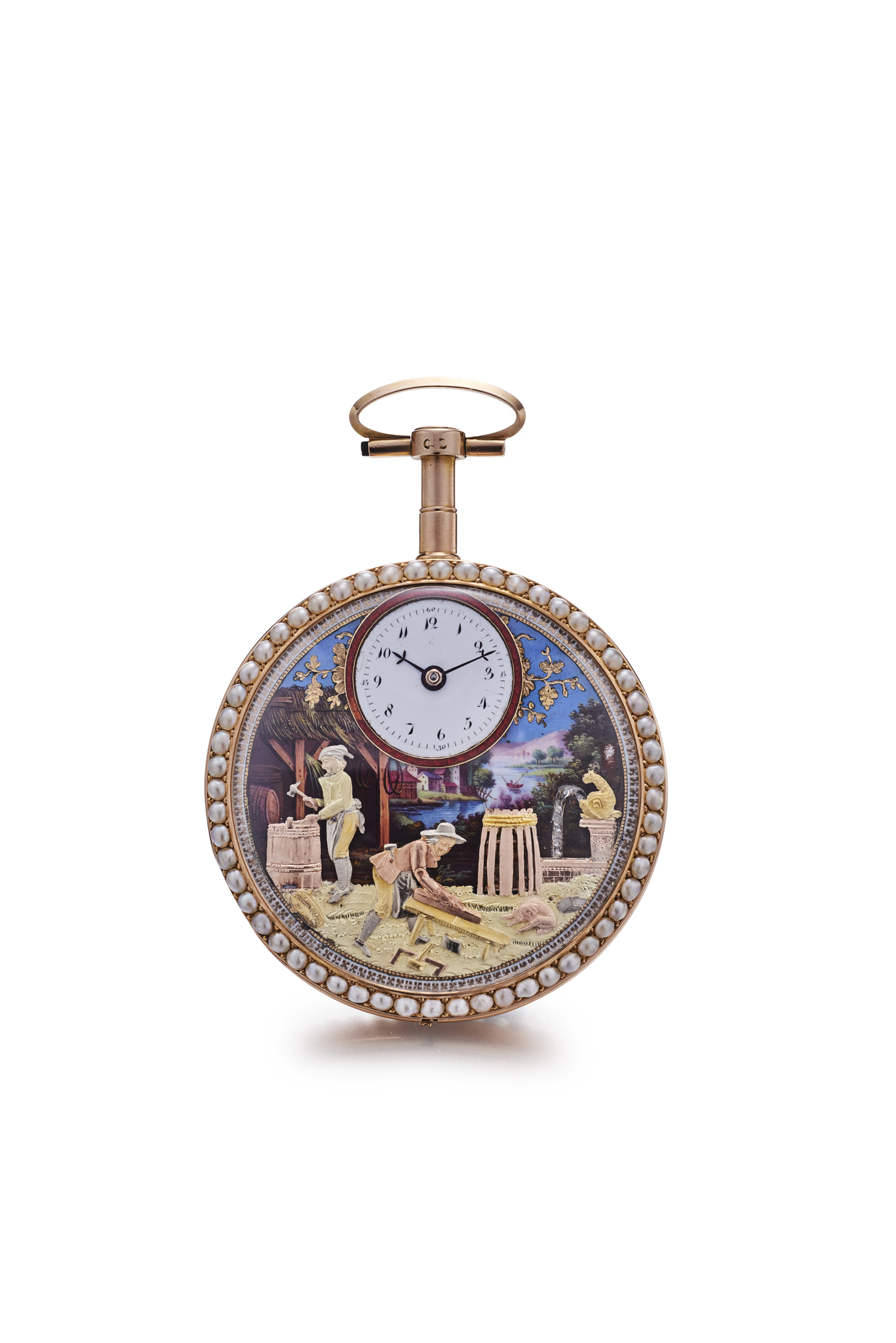 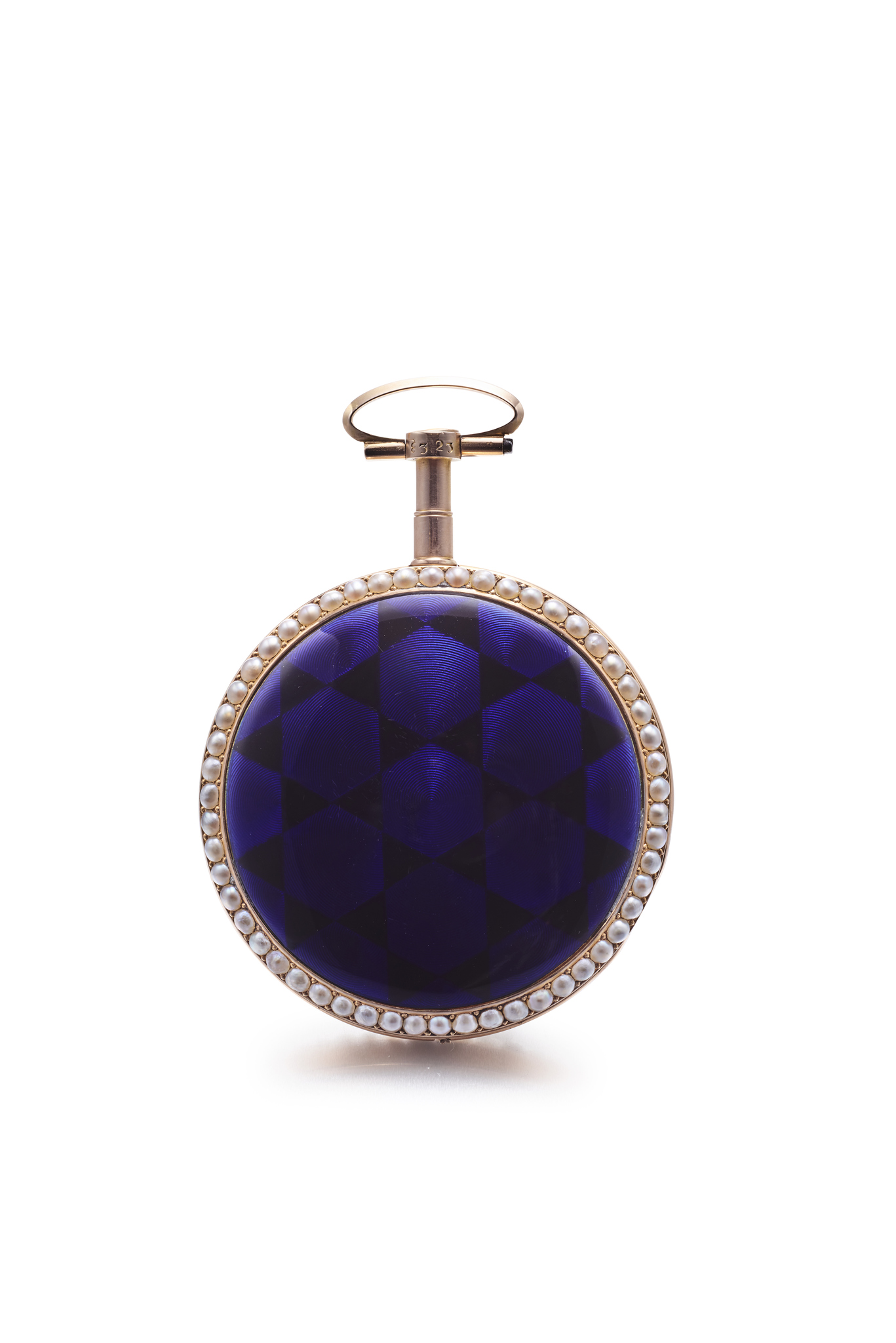 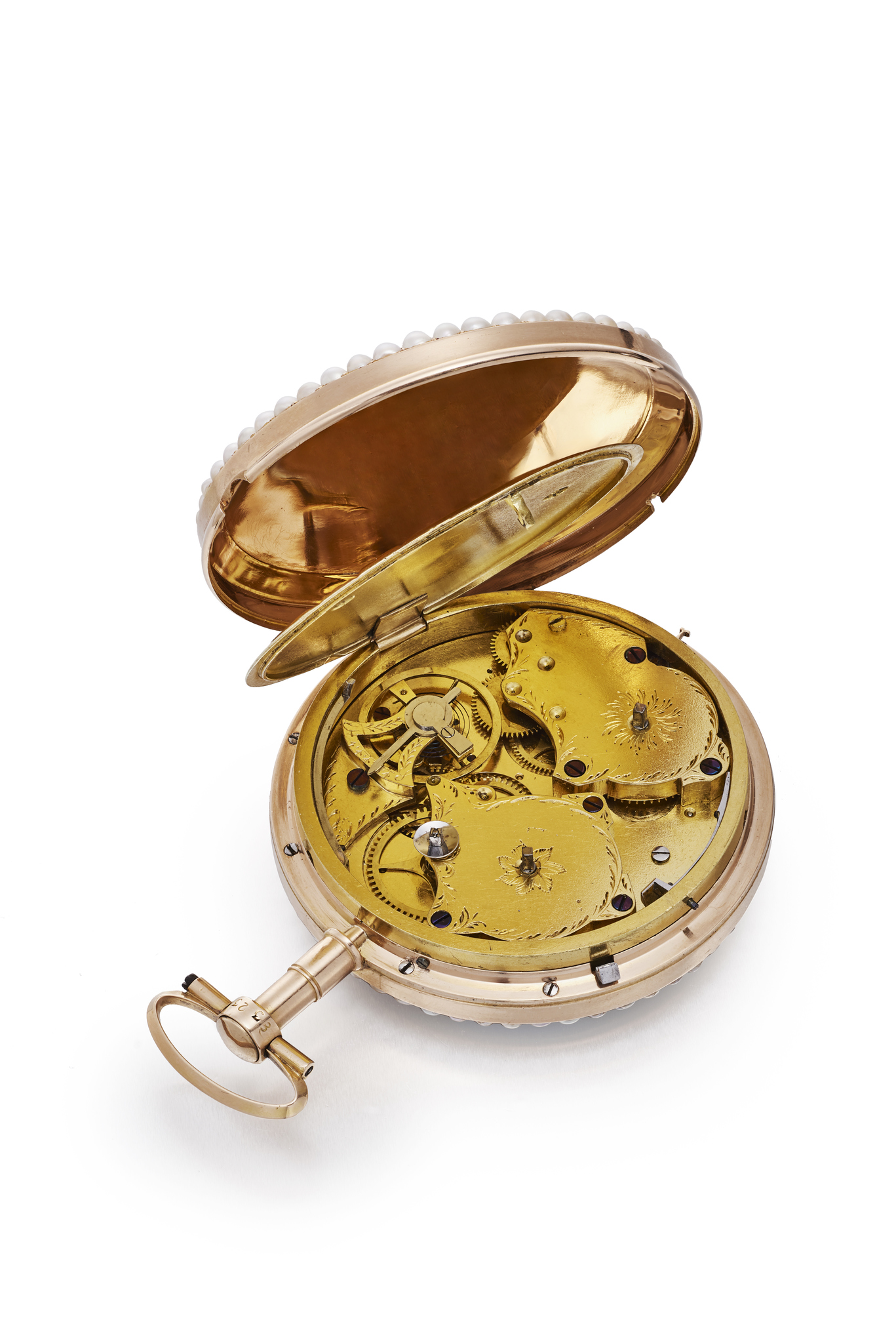 At the time, this kind of Genevan watches were often intended for export markets and mainly sold in China from Western trading posts (hongs): the Thirteen Factories (also known as the Canton Factories), a neighbourhood along the Pearl River in southwestern Canton (Guangzhou), province of Guangdong. Contrary to the watches decorated with painted enamel scenes and intended for the Chinese market, the scenes of the automaton watches are never performed with a mirror effect; they are always made in the same direction. This is probably due to technical and financial reasons (cost of production, efficiency). The only known exception is a pair of object-watches in the shape of a perfume bottle (height: 20 cm.), signed by John Rich (born circa 1756, active in London and Geneva in the late-18th and early-19th century), kept today in the Patek Philippe Museum, Geneva (Inv. S-144 a+b). The watch that we present here is not signed but has a movement with two trains of independent gear and engraved decorations typical of the productions known and signed by John Rich. There is a registered partnership on March 27, 1799 (7 germinal, an 7) between the named « Decombaz et Rich » ; dissolved association on October 14, 1805 (22 vendémiaire, an 14). This is most probably Louis Decombaz, Genevan watchmaker, active between circa 1780 and circa 1820, and our John Rich, watchmaker and mechanicien of English origin active in Geneva (Geneva, Archives of the City). Unfortunately, the biographical information on these two artisans are very incomplete. For more information on watches made for the Chinese market, please refer to the following books: - Chapuis, Alfred (with coll. of Loup, Gustave), La montre chinoise. Relations de l’Horlogerie suisse avec la Chine, Neuchâtel, Editions Attinger Frères, 1919. - Tellier, Arnaud, & Didier, Mélanie, Le Miroir de la séduction, Prestigieuses paires de montres « chinoises » ?? The Mirror of Seduction, Prestigious pairs of “Chinese” Watches, Geneva, Patek Philippe Museum Editions, 2010. John Rich He is an enigmatic figure. There are samples of his work that are so magnificent that one would think that there would be an abundance of material concerning him, yet this is not the case. Some of the most complicated automata, such as The Magician Box, or the Sandoz Scent Bottle, are signed by him. Alfred Chapuis and Edmond Droz, authorities on automata, described the Magician as “the most remarkable snuff-box known to the authors”. It is signed “Made by John Rich”, but only on the barrel. The piece must be taken apart for the maker’s name to be seen. Some boxes that we have examined are signed “John Rich, London” or “John Rich, London & Genève”, while yet others, mechanically identical, are not signed at all. The same is true of his watches; if they are signed, it is very often in such an unobtrusive place that only a watchmaker who has taken the piece apart would see them. Granted, some of the great automata makers did not as a rule visibly sign their pieces, but they were very well-known, and there is plenty of information about them. But not about John Rich. The idea has been advanced that Rich came from England and opened a shop in Geneva. Furthermore, since Rich’s work shows certain characteristics of the work of the Jaquet Droz and Leschot, we believe that they were made by a master craftsman (or craftsmen) associated with them. Rich’s work can be dated no earlier than 1780 and no later than the first few years of the 19th century, spanning probably from about 1780 to 1805 or slightly afterwards; a quarter of a century of magnificent mechanical achievements, without leaving any information for posterity but the work itself. The magnificence of his work and the mystery surrounding him, fascinate us to the point that we decided to do research to try and solve this puzzle. Although it is still in progress, we have found some leads which in the future will hopefully give us the entire picture of the man and his work. In terms of hard evidence, we have found two previously unknown documents, one dated 7 germinal an 7 (28 March 1801) recording the establishment of a partnership between a certain Decombaz and John Rich in Geneva, and another dated 22 vendémiaire an 14 (14 October 1805) recording the dissolution of that partnership. The Decombaz mentioned was very likely the famous one who was active from 1780 until after 1820. We know that Decombaz specialised in perpétuelle and Grande Sonnerie watches, and that he supplied Leschot (and probably Jaquet Droz before him) and Breguet with finished movements. Source: Antiquorum, Geneva, auction, April 13, 2002, lot 596.