Yellow gold and enamel, open-face, key-winding, round-shaped, “Directoire” large pocket watch with one horological complication: - Quarter-repeater on one bell (activated by depressing the pendant) leading by two Jacquemarts (Jacks) who really strike the bell with their hammers The Jacquemarts (Jacks) are in the habit of Incroyables (the Incredibles) and Merveilleuses (the Marvelous); men’s and women’s costume fashionable during the late 1790’s and the Directoire period in France. Royal blue flinqué enamel (translucent enamel over guilloché engineturning) case-back with a polychrome scene showing an Allegory of Victory and Peace glorifying General Napoléon Bonaparte, to whom France will owe him Victory and Peace (“La France lui devra la Victoire et la Paix”). 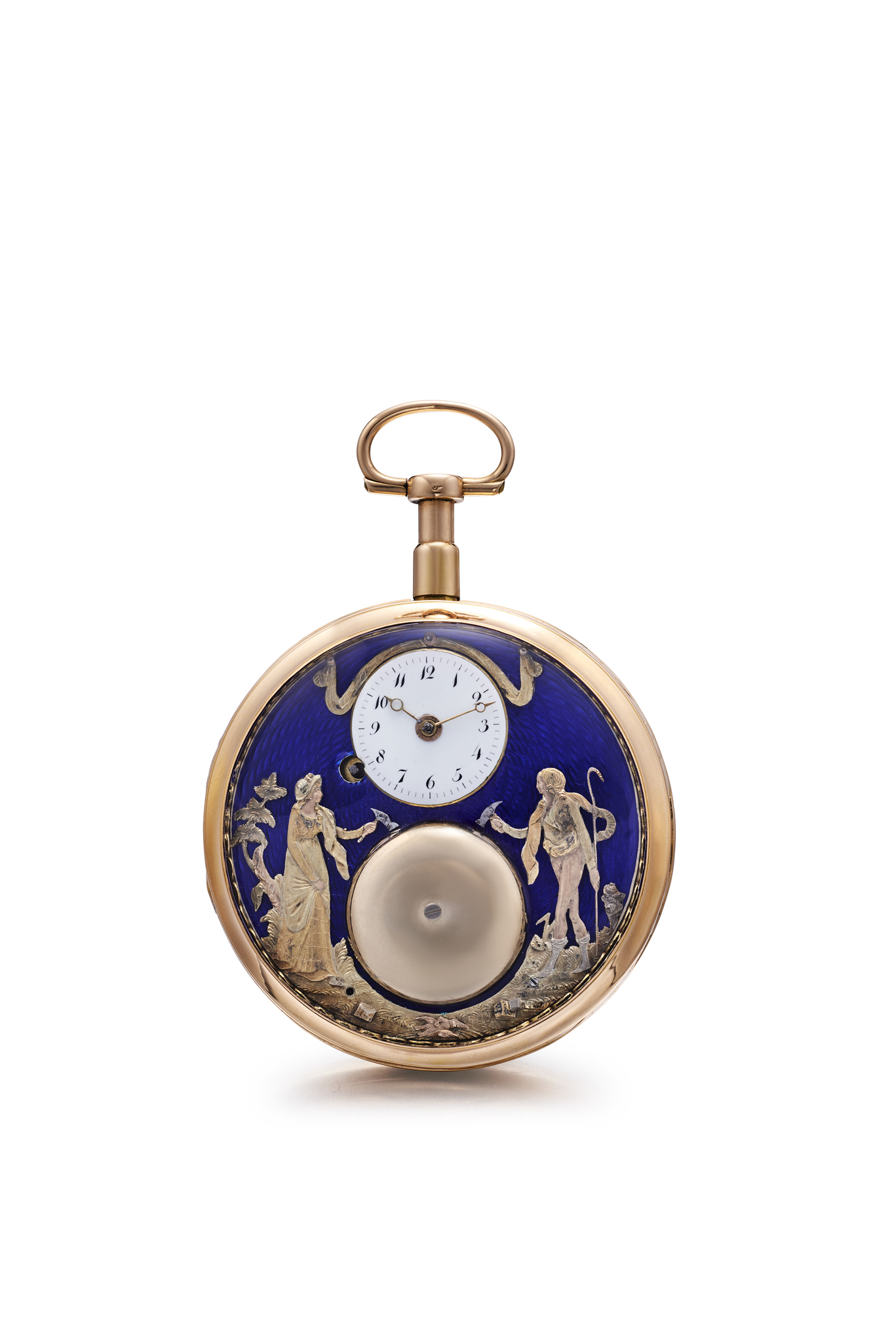 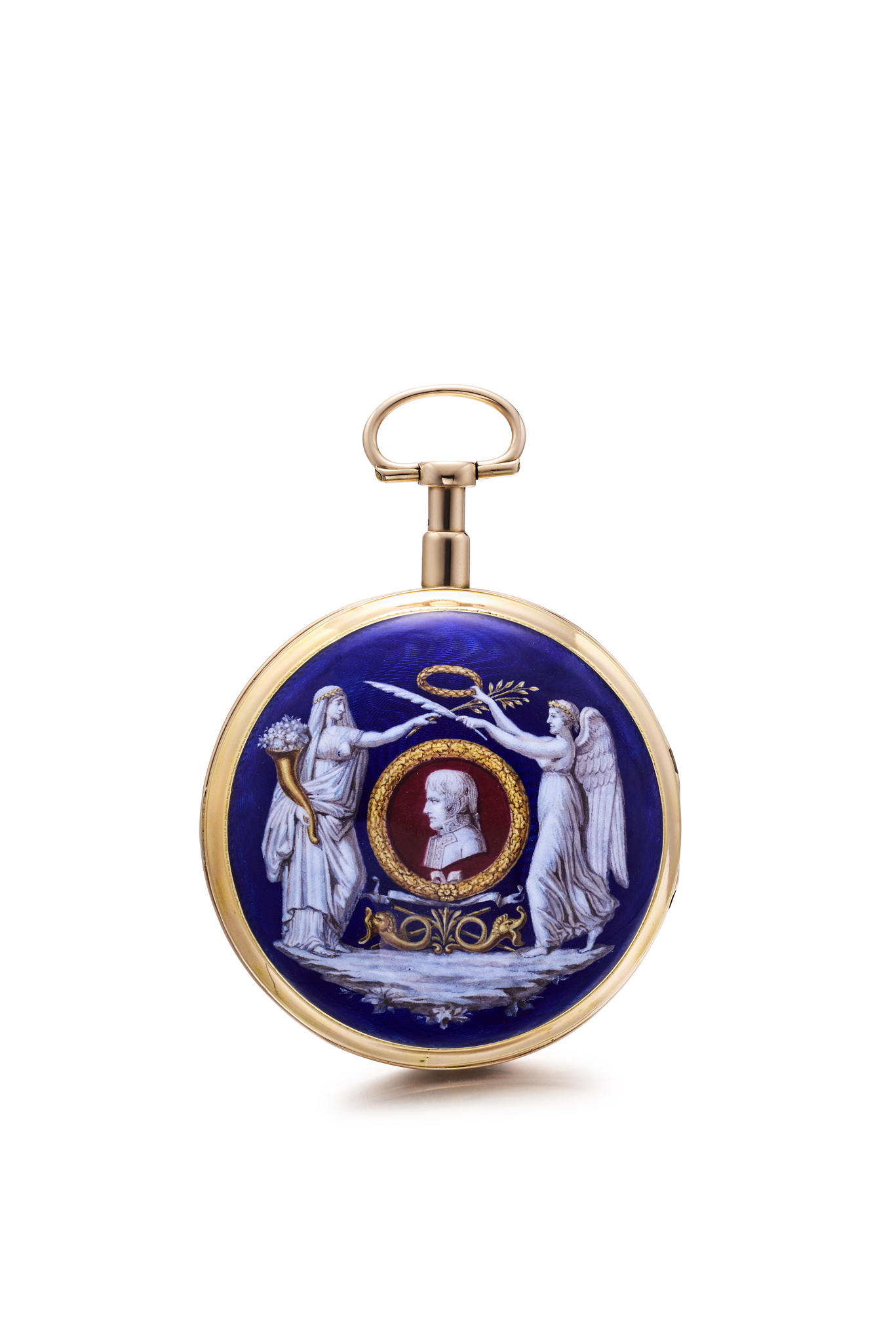 This watch was presented at auction 45 years ago, in Autumn 1974, at the first sale ever organized by Antiquorum in Geneva, then known as Galerie Genevoise d’Horlogerie Ancienne (Genevan Gallery of Ancient Horology), by its founder Mr. Osvaldo Patrizzi. Provenance Antiquorum, Geneva, auction No. 01, October 8, 1974, lot 76. Watch with Jacquemarts that really hit the bell In contrast to most repeater watches by Jacquemarts (Jacks; hammer striking figures), whose automata pretend to strike the hours and quarters with their hammers but in fact strike through hammers incorporated into the movement on bells or gongs placed inside it or inside the case ?? in this type of watch the hammers held by the automata really hit the bell.Two watches with this type of movement are kept in the Patek Philippe Museum, Geneva (Inv. S-403 and Inv. S-495). The Incroyables (the Incredibles) and the Merveilleuses (the Marvelous) After the Thermidor, the French began to reveal against the dress styles traditionally associated with the Revolution, including the sans-culottes, cockades, and tricolour accessories and clothes, and developed new styles, more closely associated with aristocratic fashions prior to the Revolution than to more recent styles. Perhaps the most salient, and also most widely criticized, expression of such fashions was exhibited by les “Incroyables" (the Incredibles) and their female counterparts, “les Merveilleuses” (the Marvelous). The typical outfit of these new dandies consisted of a double-breasted, square jacket, similar to a redingote with cut tails, deformed vest with heavily stuffed pockets, white scarves around the neck, tight-fitting breeches with long ribbons dangling below the knees, and open, pointed flat shoes. The Merveilleuses wore Neoclassical style dresses, with high waists and open necklines, narrow skirts, and often made up of light fabrics such as muslin, to assimilate the style of the mythical females of classical antiquity; their hair was often made in a variety of styles, or covered with the different hats that were popular at the time, including bonnets, toques, turmans, and the popular cornette. Incroyables and Merveilleuses were often criticized for their love of fashion, still associated with the ills of the pre-Revolutionary monarchy, and were subject of a wide number of caricatures that exposed them as worthless citizens and women with loose morals. Their style, however, has come to be associated with the fashions of the Directoire and the Empire, with Empress Josephine being one of the most popular Merveilleuses before her marriage to Napoléon. “La France lui devra la Victoire et la Paix” (France will owe him Victory and Peace) This representation of Napoleon Bonaparte (1769-1821), then young victorious general, is realized during the period of the Directoire and more probably in the interval of time which has elapsed between the treaty of Campo-Formio, signed on the 26 vendémiaire an 6 (October 17, 1797) ?? which puts an end to the Franco-Austrian war (since 1792) and the first Italian campaign ?? and the departure of the Expedition of Egypt, which took place on the 29 floréal an 6 (May 18, 1798). The Histoire numismatique de la Révolution française (Numismatic History of the French Revolution) by Michel Hennin (Paris, 1826) tells us that among the many tokens and medals glorifying Bonaparte at this time ?? his return from Italy to Paris, in December 1797, is triumphant ?? three tokens are struck, with, on the obverse, the bust of the general in embroidered uniform (with or without lapels and epaulets), looking left, with the legend (titulature) “Buonaparte né à Ajaccio le 15 août 1769.” (Buonaparte born in Ajaccio on August 15, 1769.), and, on the reverse, the legend (titulature) “La France lui devra la Victoire et la Paix.” (France will owe him Victory and Peace.) in a closed olive (or laurel) wreath, with below “an 6 de la république.” (year 6 of the Republic.), whether 1797-1798 (tokens classified on December 31, 1797, pp. 583-584, Nos. 834, 835 and 836, illustrated on p. 83; these tokens exist in silver, Ø 33.5 mm, and bronze, Ø 32 mm). In addition to these tokens and medals, many effigies of Bonaparte begin to appear (1797-1798), in the form of engravings or on objects, while he is for the French people the hero of the Battle of Arcola (25-27 brumaire an 5; November 15-17, 1796) and the winner of the Austrians and Germans. Today, the most famous portrait of the young general is that unfinished (1798) by Jacques-Louis David (1748-1825) (Paris, Louvre Museum, Inv. FR 1942-18). Another later portrait (1806) depicts him as Emperor on his throne surrounded by the Allegorical Figures of Victory and Peace by Andrea Appiani (1754-1817) (Moscow, Pushkin Museum, Inv. 2 102).