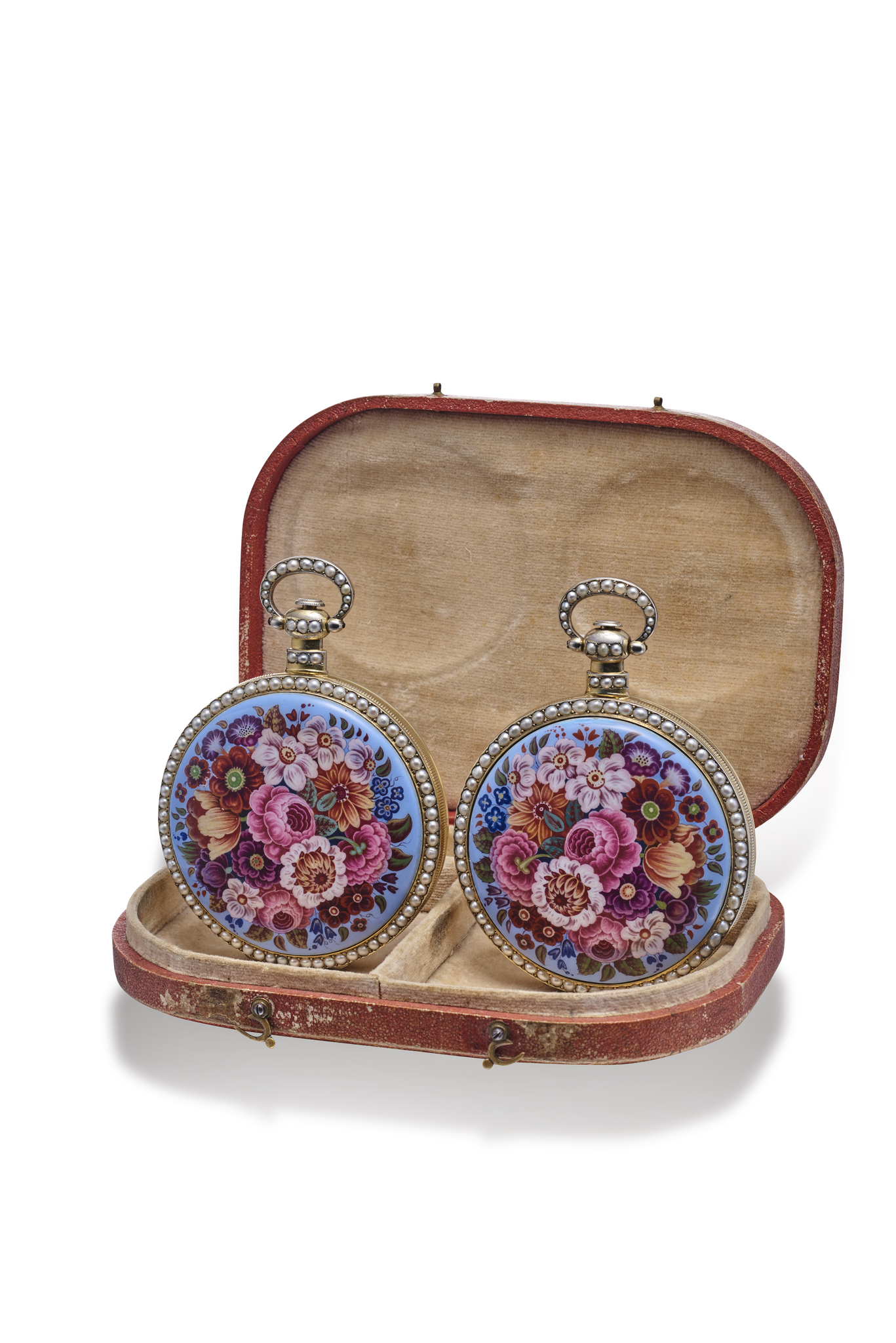 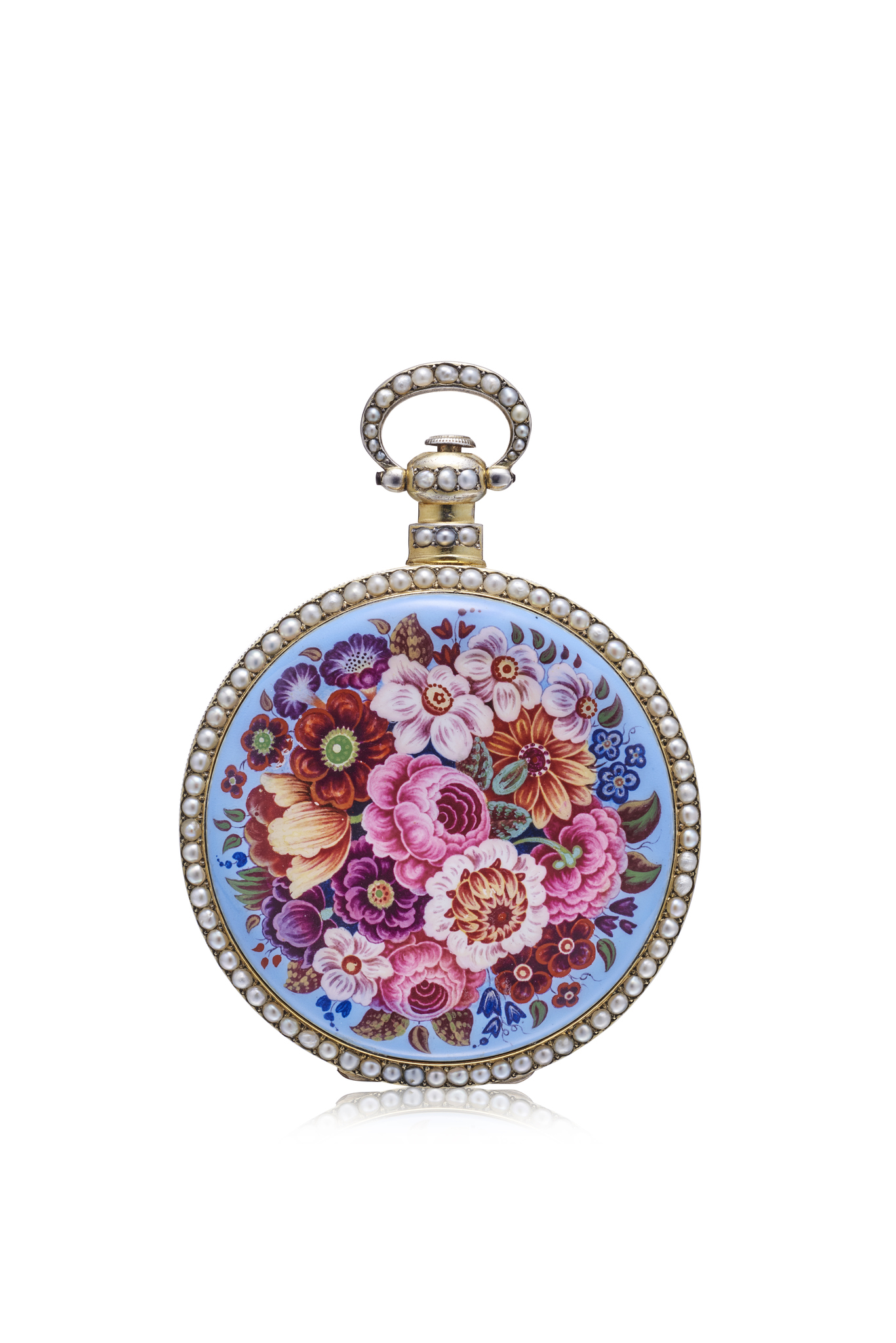 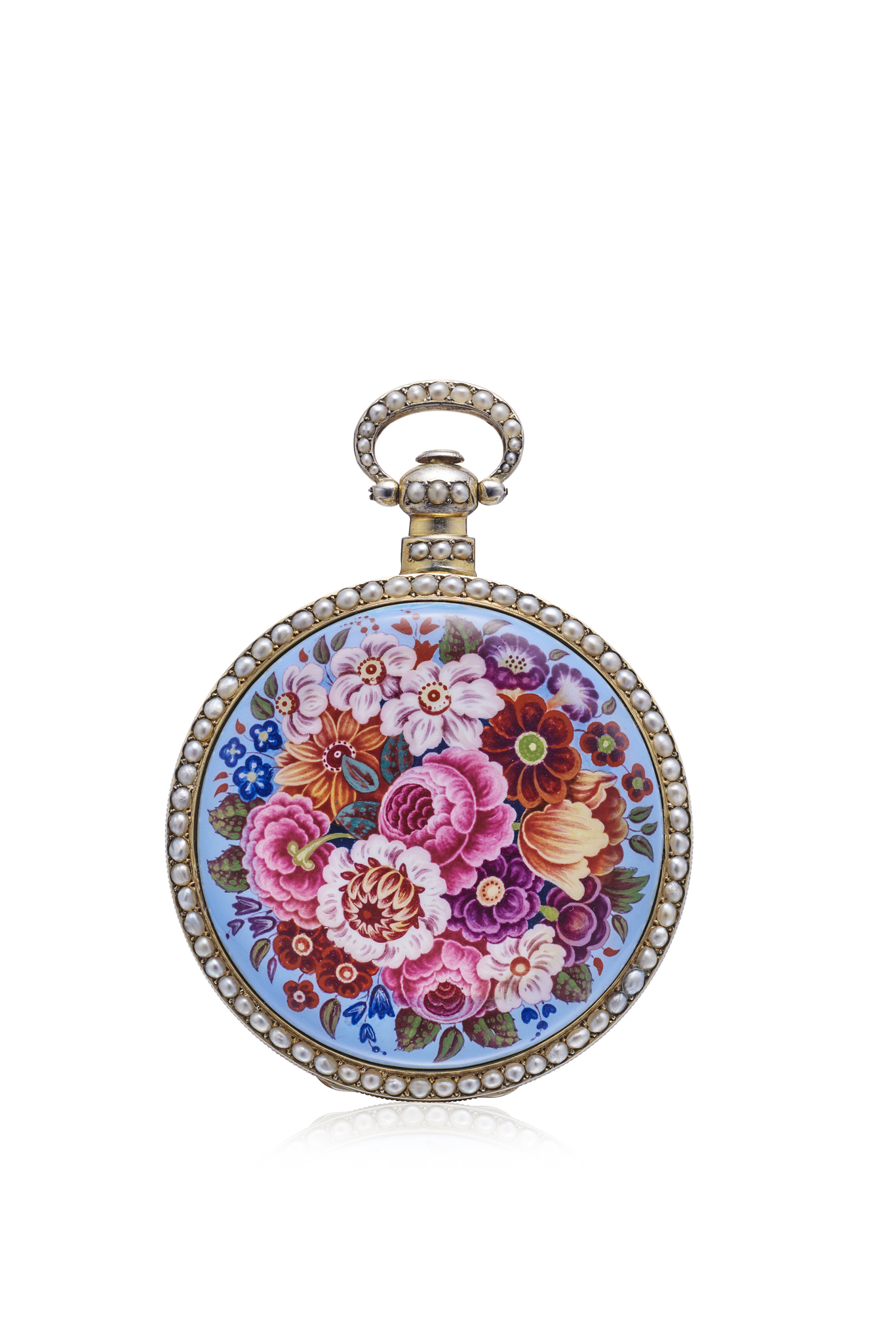 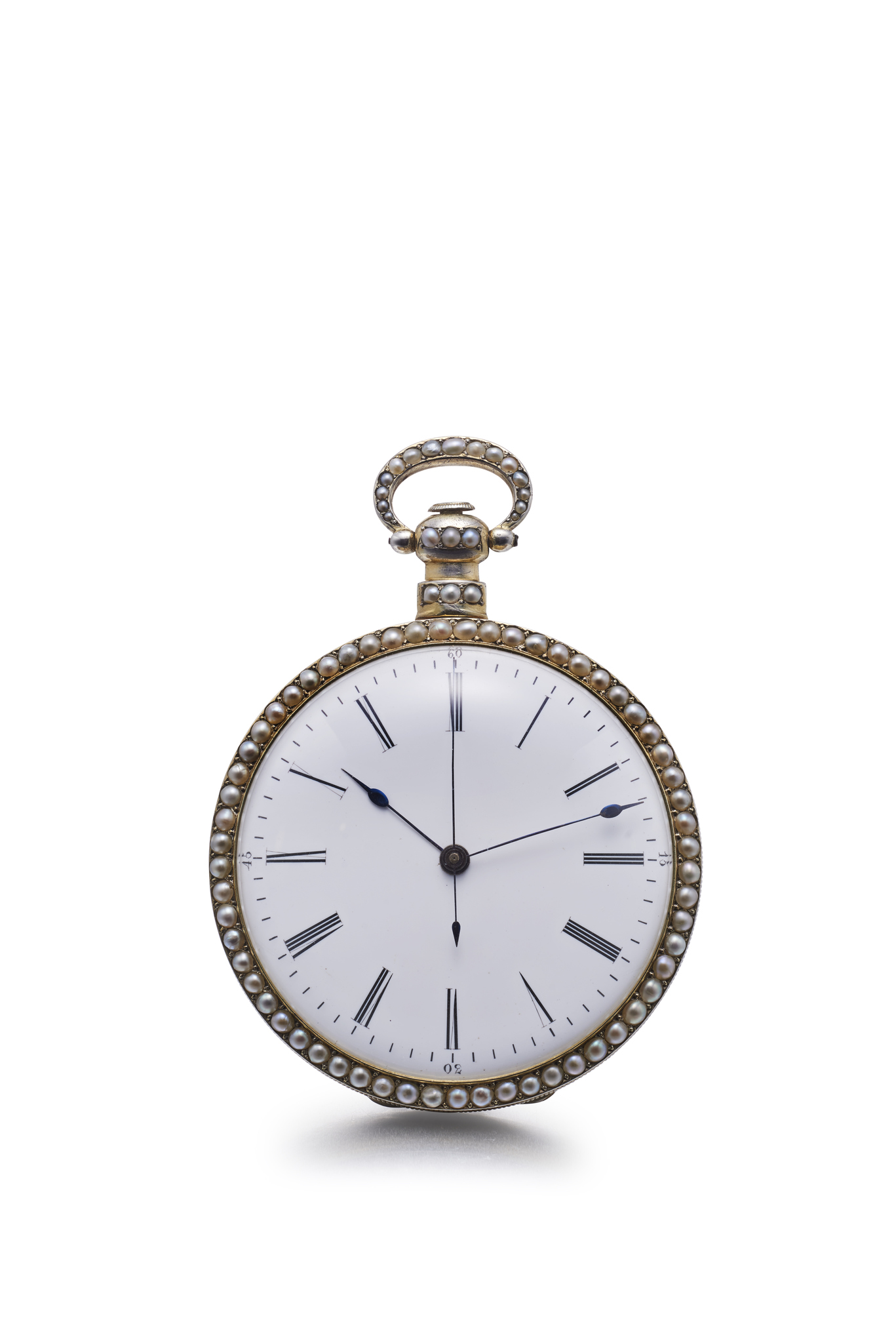 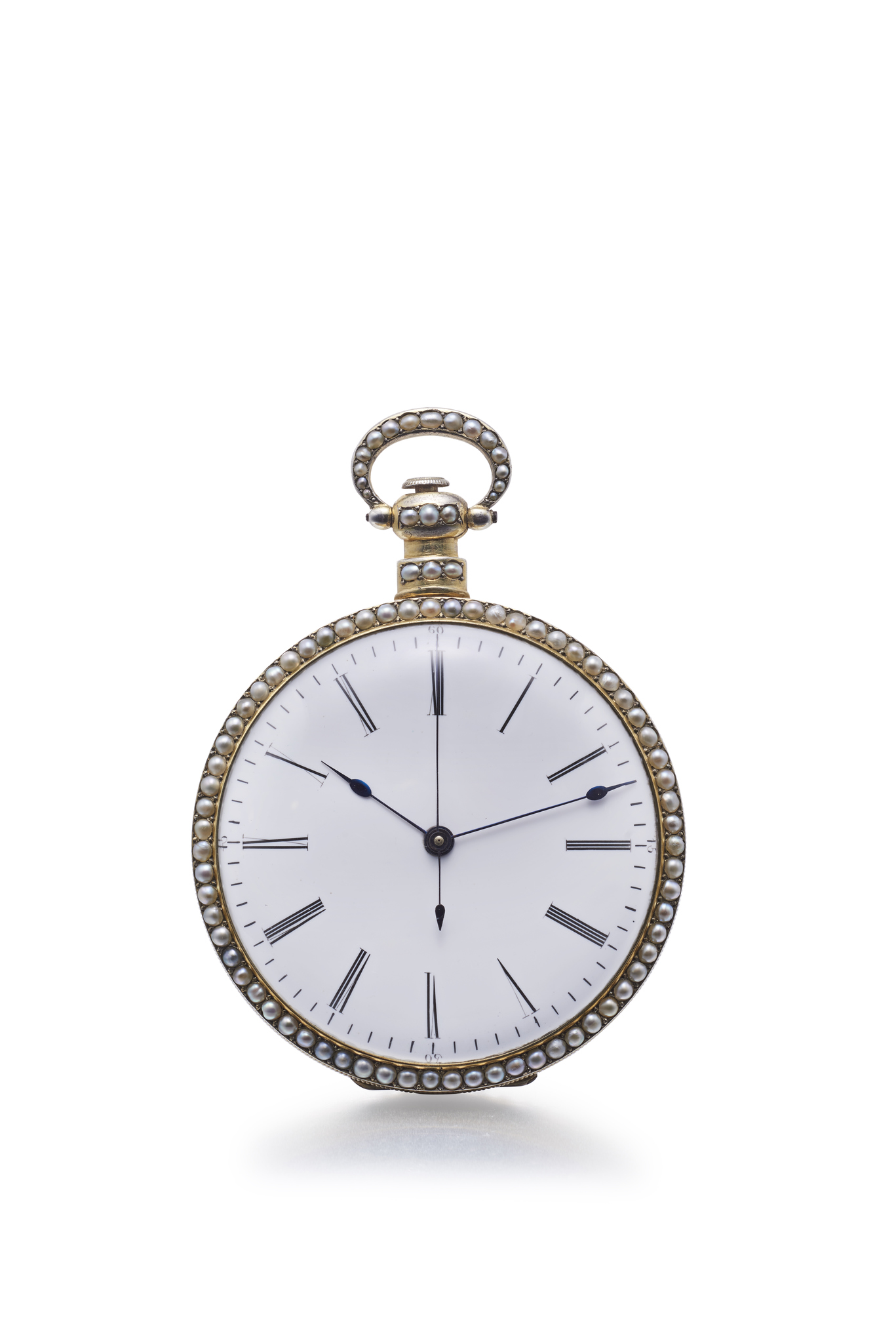 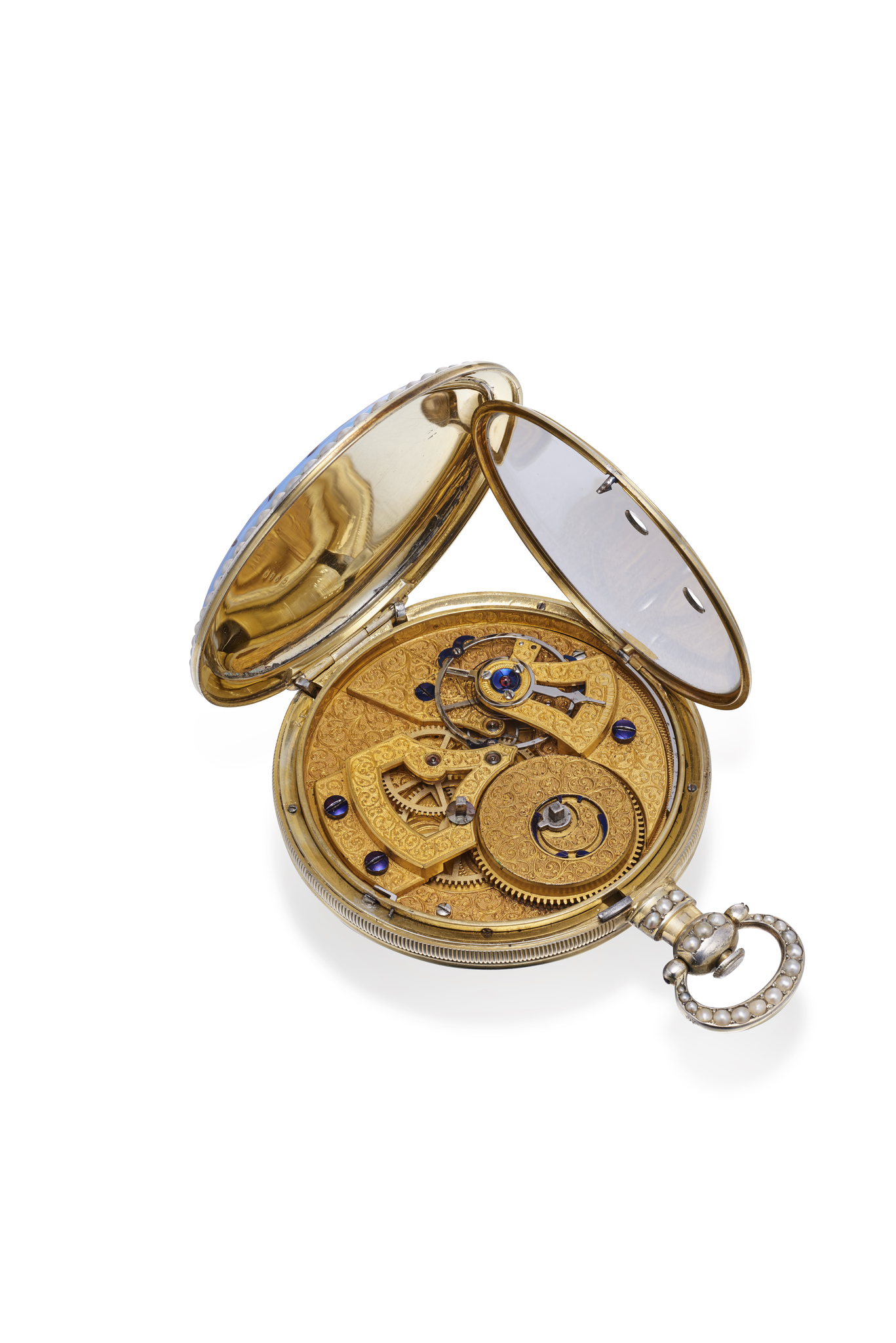 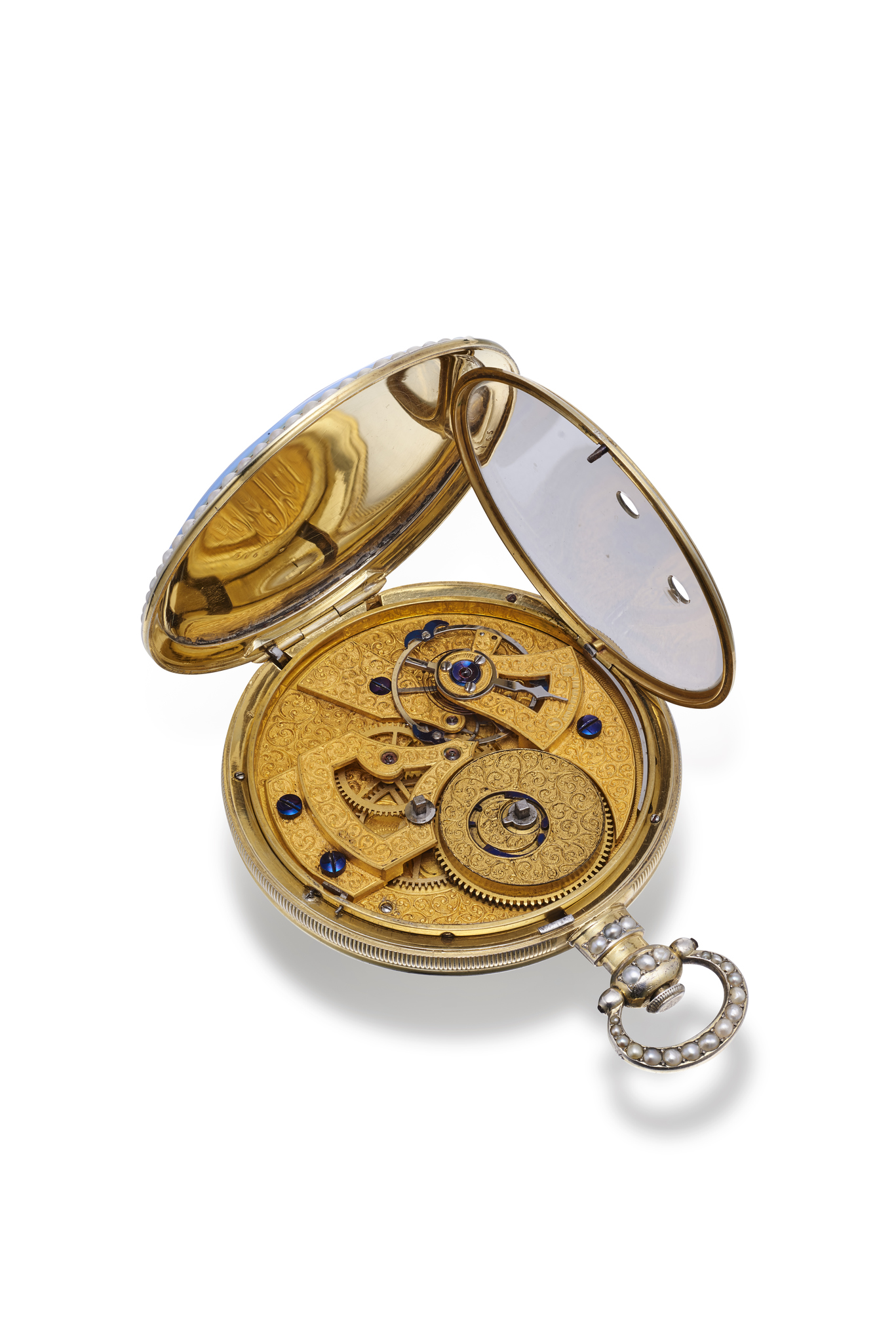 These watches were presented in 2010 in the Patek Philippe Museum, Geneva, during the exhibition The Mirror of Seduction, Prestigious pairs of “Chinese” Watches (May 15 ?? October 16). Bibliography Tellier, Arnaud, & Didier, Mélanie, Le Miroir de la séduction, Prestigieuses paires de montres « chinoises » ?? The Mirror of Seduction, Prestigious pairs of “Chinese” Watches, Geneva, Patek Philippe Museum Editions, 2010, pp. 134-135. Characteristic of the production of Val-de-Travers watchmakers, the numbering of pairs of watches is generally identical, except that second piece of the pair has a dot. Flowers bouquets, with or without couples of doves, are subjects often seen in the work Val-de-Travers watchmakers. Duplex-Jacot Escapement During the last quarter of the 18th century, several watchmakers tried to produce watches with dead centre-seconds hands, much in favour among the scientific community. The first attempt, made in Geneva by Jean-Moïse Pouzait (1743-1793), circa 1786, featured a lever escapement associated with a large seconds-beating balance (the model of this escapement was presented to the local Société des Arts). Due to its spectacular aspect, and in spite if its inertia sensitivity Pouzait’s escapement was much appreciated by the Chinese before the invention by Charles-Edouard Jacot (1817-1897), a watchmaker from La Chaux-de-Fonds (Neuchâtel mountains), circa 1840- 1850, of the so-called duplex-Jacot or “Chinese duplex” escapement, with double-tooth arrangement. The Jacot escapement, like any duplex escapement, is a frictional one the friction from the escape wheel is constantly present. Enabled inexpensive production of dead centre-second watches it was often used in the watches made for the Chinese market. Jacot, Charles Edouard (1817-1897), La Chaux de Fonds Charles Edouard Jacot worked in La Chaux de Fonds, Le Locle, Baltimore and New York. He was a prolific inventor and innovator, especially of escapement work. At the age of 19 he visited his cousin, the son of Abraham Perrelet, in Le Locle and became involved with watchmaking. In 1837, he went to New York City, where he was to stay for 20 years. Jacot invented a modification of the duplex escapement with a dead centre-seconds hand, known as the “Duplex-Jacot”, used extensively in watches made for the Chinese market (US invention Patent No. 9 150, July 27, 1852). While in America, he registered 12 American patents for perfecting the construction of watches, including the “star wheel duplex” escapement, patented on July 20, 1852, and a stop-watch feature, patented on June 8, 1858, by which time Jacot had already returned to Switzerland. There he founded the Jacot & Salzmann firm in La Chauxde-Fonds. By the 1870’s his firm was called Charles E. Jacot. One of the founders of the Société inter-cantonale des industries du Jura (Intercantonal Societies of Jurassian Industries) along with Longines. Charles Jacot died in August 1897.