Exceptionally fine and equally rare, form-watch in the shape of a scent-bottle; 18K yellow gold and varicoloured gold. 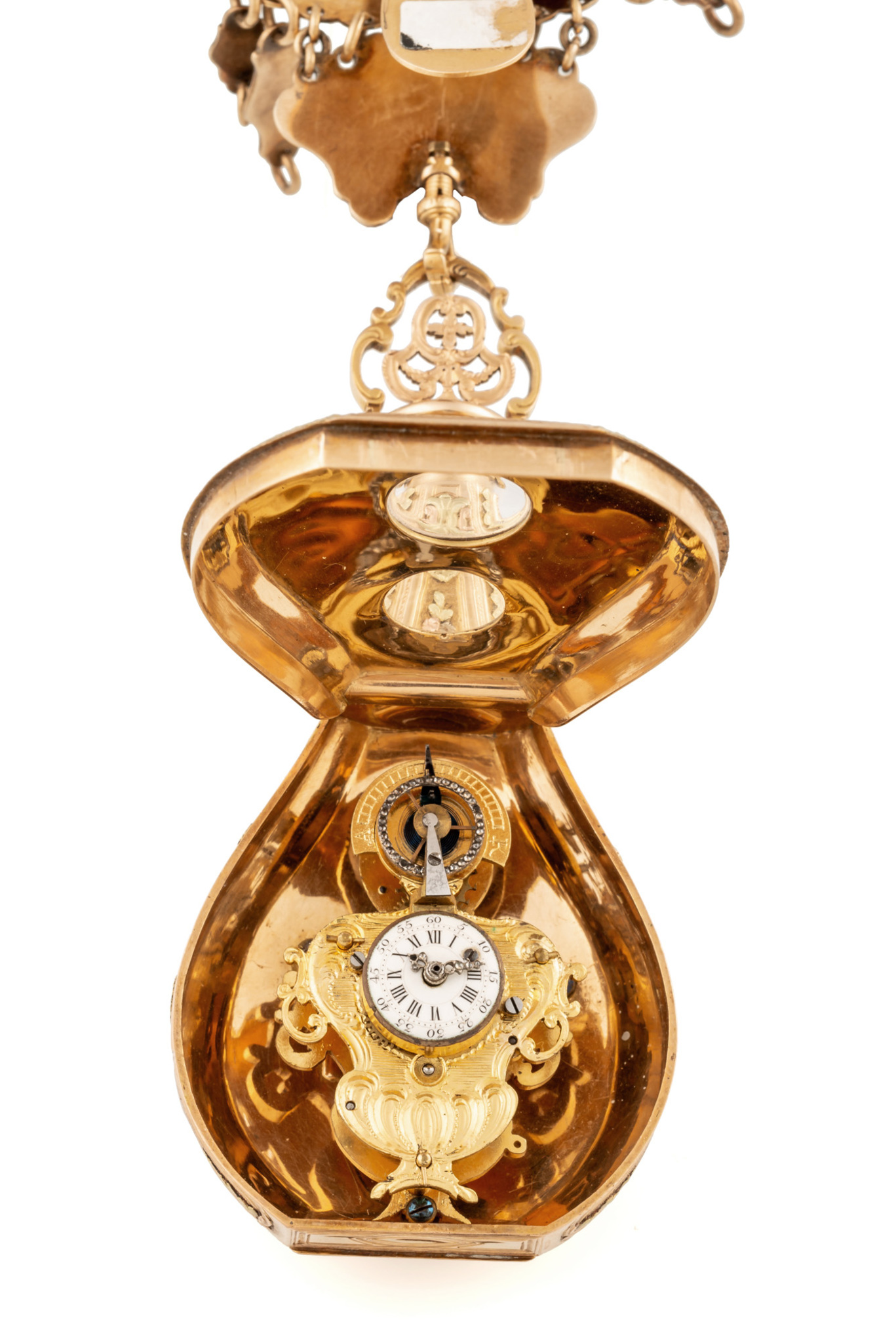 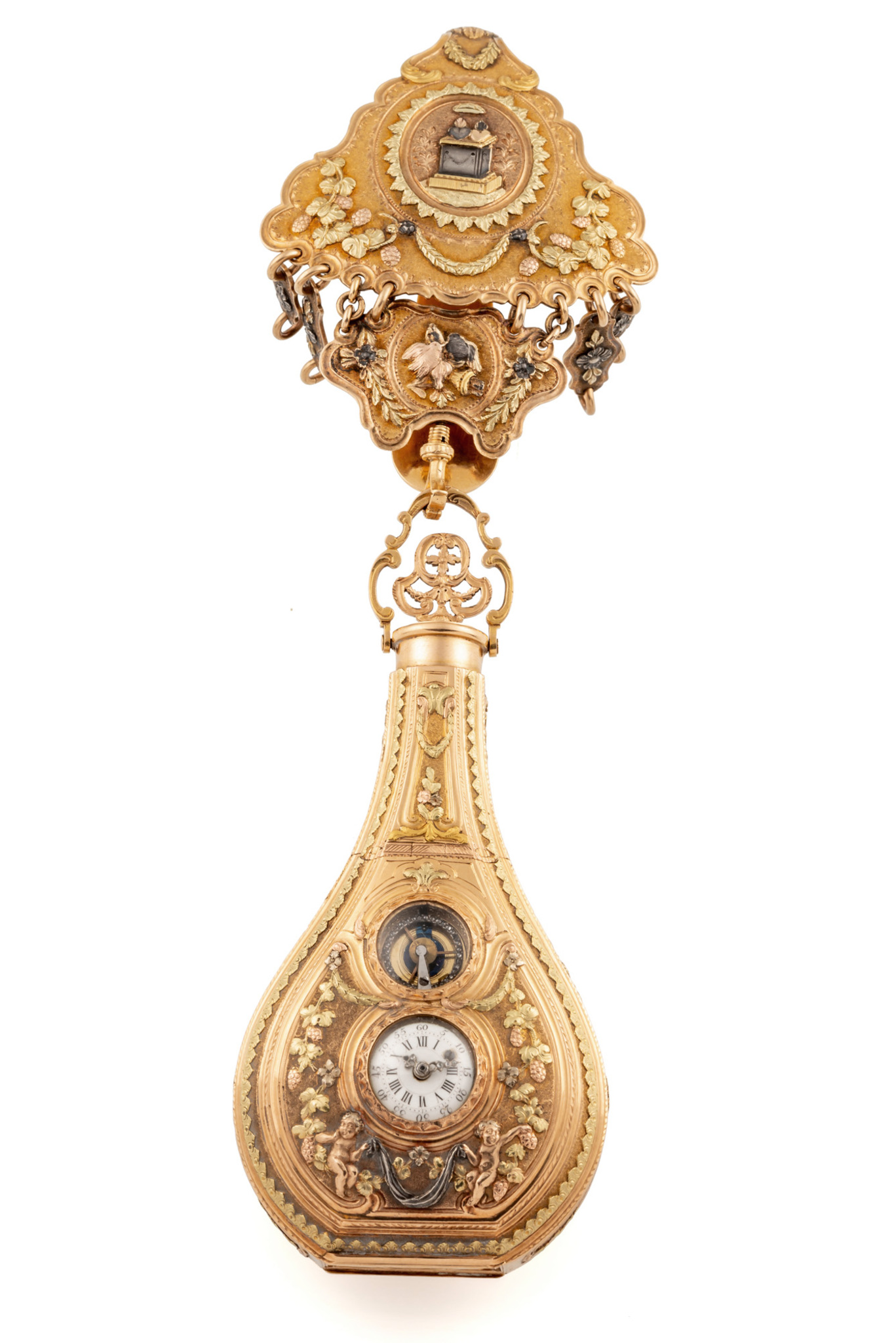 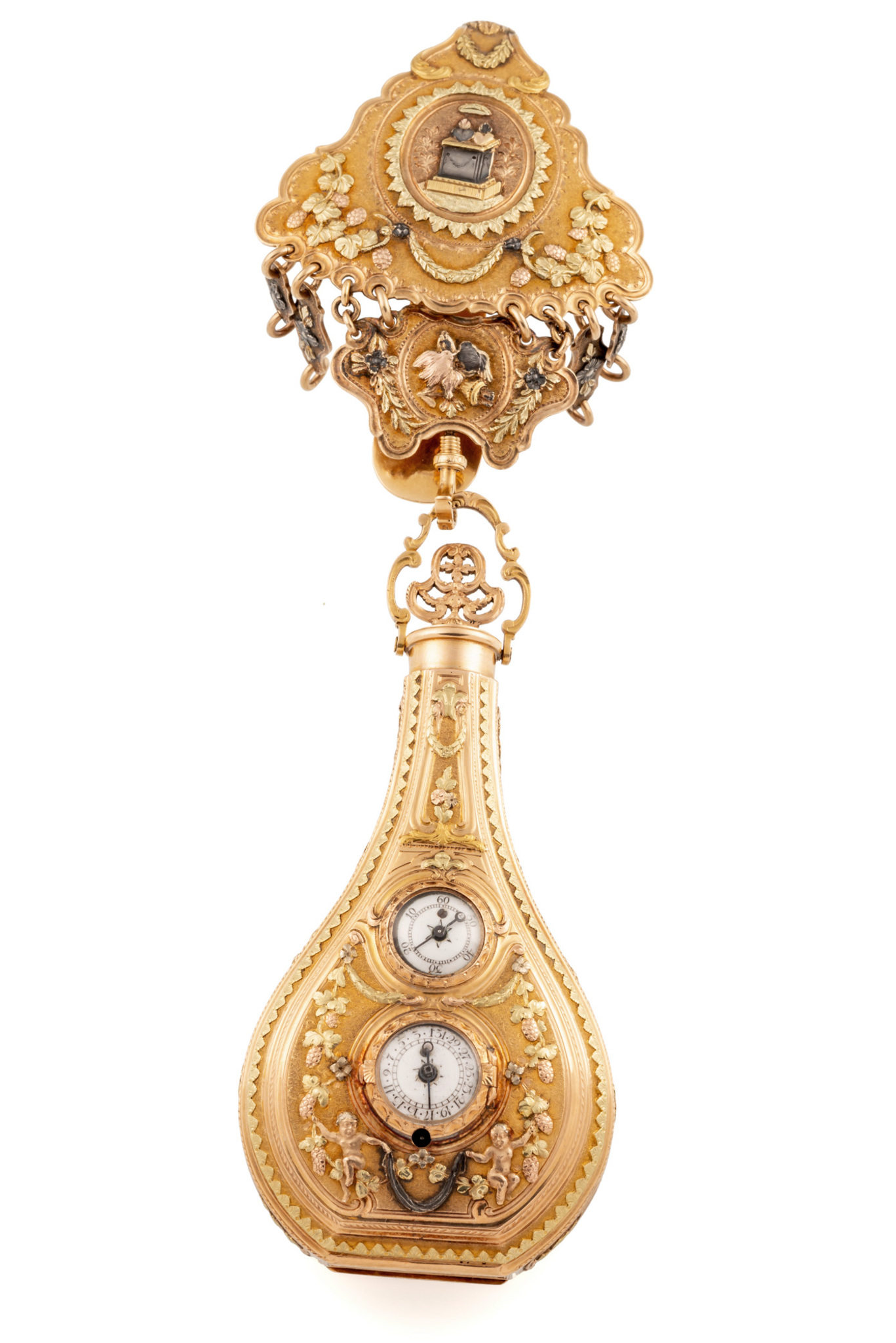 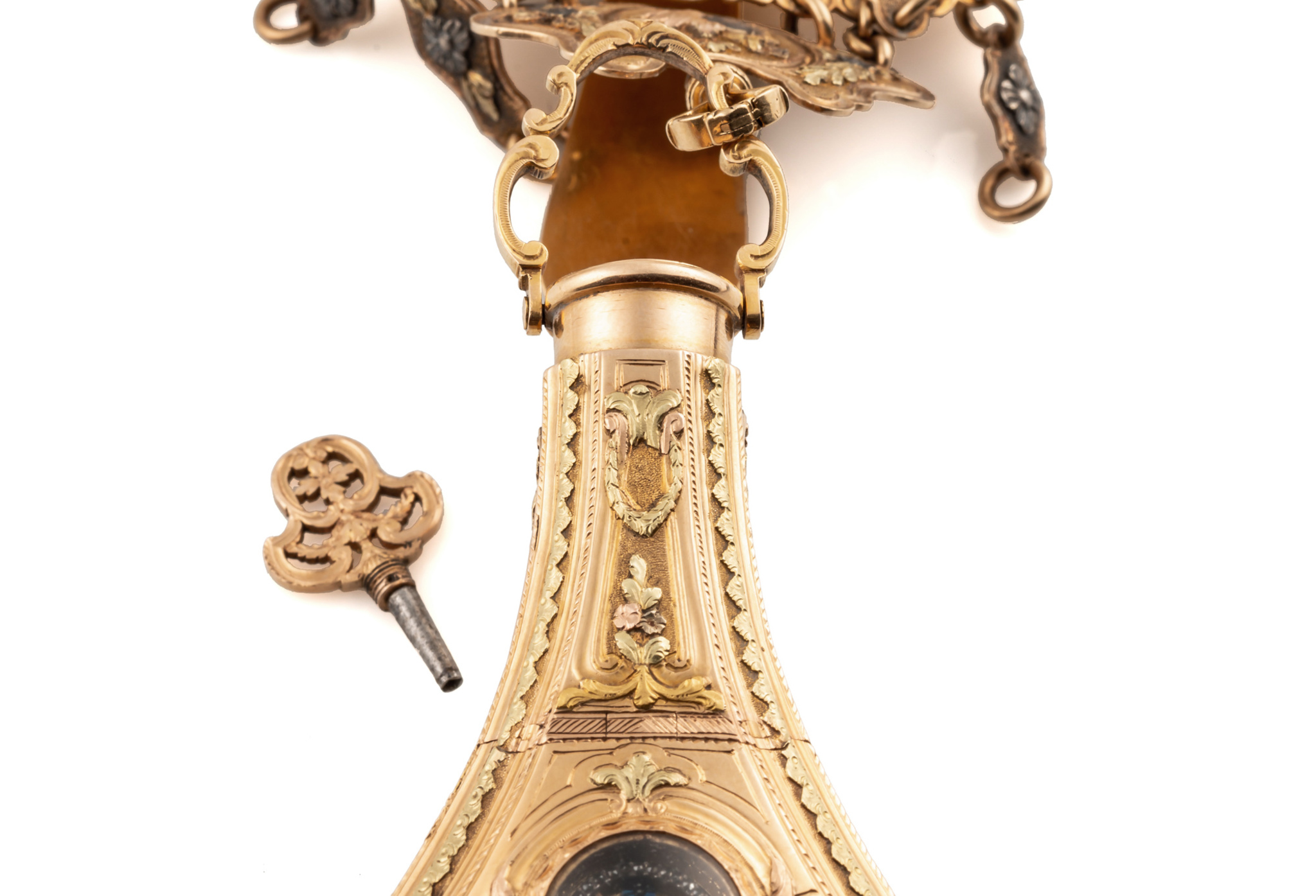 18K yellow gold and varicoloured gold, double-face, form-watch in the shape of a scent-bottle, with visible balance, date, and seconds. Body decorated with chiselled leaves, garlands of flowers, bunches of grapes and angels, over a matted background; the front with two apertures, the lower one for the dial of the watch, the upper one for its balance; the back, also with two apertures, the upper one for the seconds, the lower one for the date of the month; the winding and setting key screwed in the top of the object. Chatelaine decorated en suite with two allegories of Love; on top, an altar of Love with the union of the two hearts; below, two doves kissing each other, near a quiver and the arrows of Love. This watch-object can be linked by its decoration to a small group of Genevan pieces of neoclassical inspiration of a great facture sometimes bearing the mark “P G”, a goldsmith master who could be Philippe Gervais (c.1734-1796) or Placide Granier (c.1743-1812). The Patek Philippe Museum in Geneva, as well as the Louvre Museum and the Cognacq Jay Museum in Paris, as well as various private collections, kept in their collections several of these magnificent timepieces, some in the form of miniature lanterns (with three dials), double-side miniature cartels (with two dials), canes handle, boîtes à montres (with two or three dials), perfume bottles (with two or three dials), “World Time” bonbonnière (with one dial), but also various boxes without watches (snuff-boxes, bonbonnières), etc. On these objects we someti - mes found the signatures of Parisian watchmakers and retailers, such as Pierre Morand, Adam L’Echopié (master received in 1758), etc. Philippe Gervais (c.1734-1796) Bijoutier (jeweller), son of André, who came from Hanau in Germany, to Geneva and was registered as a habitant (resident) on September 8, 1761. Two years later, on November 12, 1763, he was received as a master under the usual restrictions imposed on foreigners and presented as his masterpiece “une tabatière émaillée et garnie en diamants, for propre” (a most acceptable gold and enamel snuff box set with diamonds). On February 26, 1764, he married a local woman, Gabrielle Rey, with whom he had three children. Gervais died in Geneva on August 19, 1796. He associated with Pierre Delasauzais, Master goldsmith (received on March 31, 1744). Placide Granier, Geneva (c.1743-1812) Born in Cambrai in the North of France circa 1743, he died in Geneva on April 25, 1812. In this city he married Anne André (1745-1814), a lady probably from the long line of goldsmiths and painters on enamel. He was admitted, though simple domicilié (domiciled), to the privilege of the master’s degree in Geneva on December 28, 1784 (which proves his great abilities), having presented as a masterpiece “une boîte garnie de diamants très bien faîte’’ (a box set with diamonds, very well made). He was received as a habitant (resident) of that city on July 6, 1791, and Master goldsmith the following August 2. He associated with Jean-Georges Vignier (1769-1833), Master jeweller (received on August 27, 1791).