Very rare and large, 18K gold, quarter repeater pocket watch with automatons, Royal blue translucent enamel over guilloché engine turning back and pearls set bezels. Punchinello appears on a balcony supported by two columns to strike the hours on the scythe of Father Time, as soon as he has disappeared, two cherubs below strike the quarters. 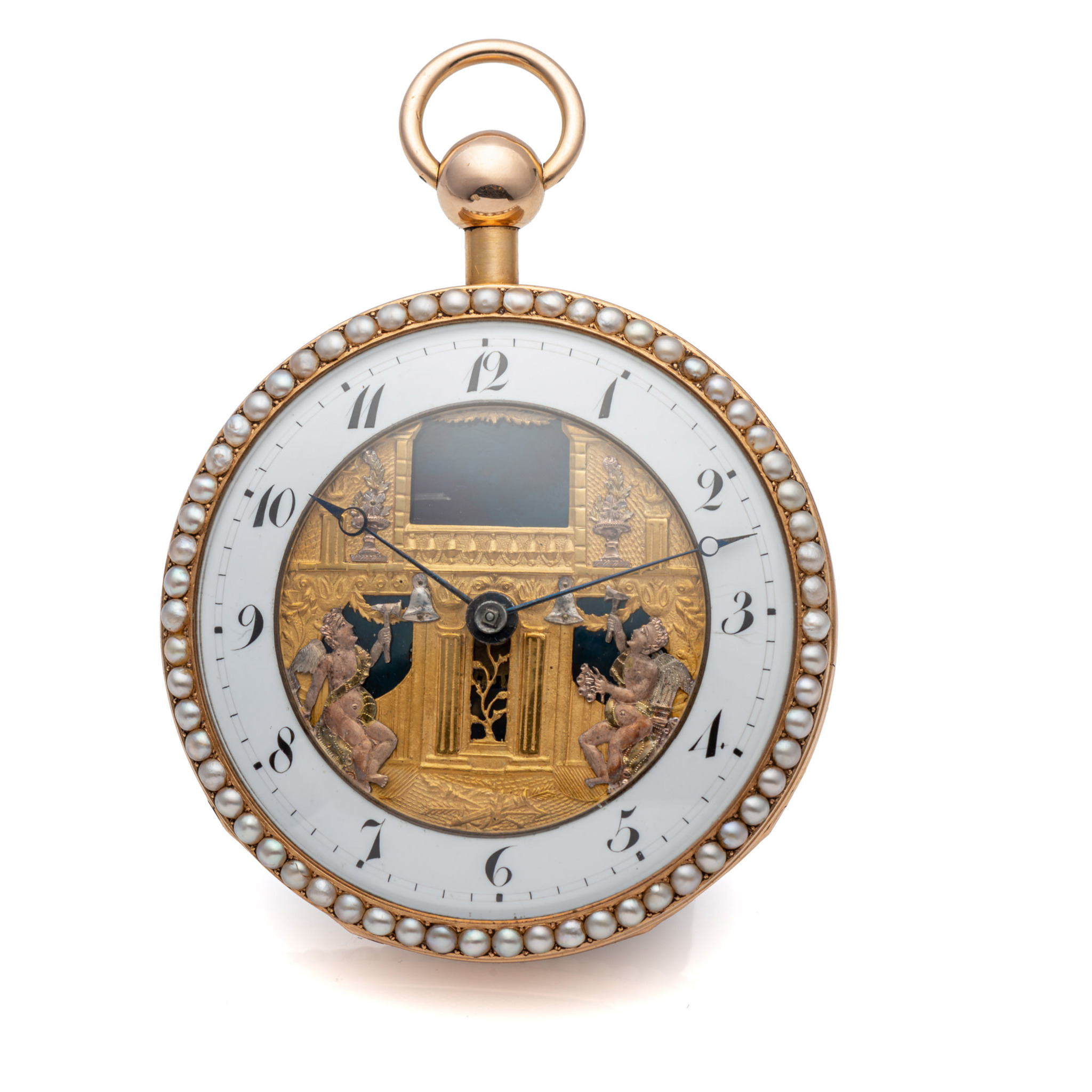 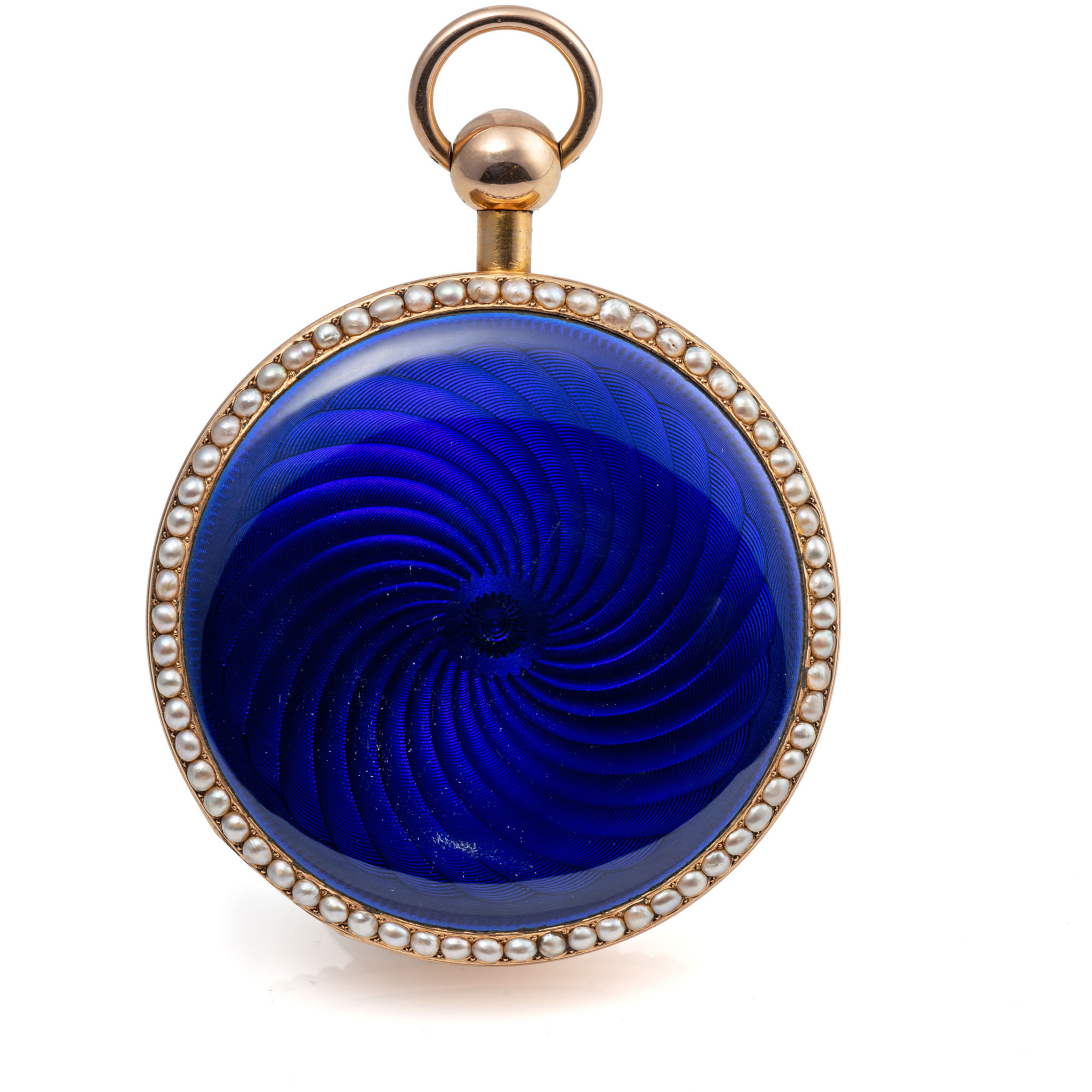 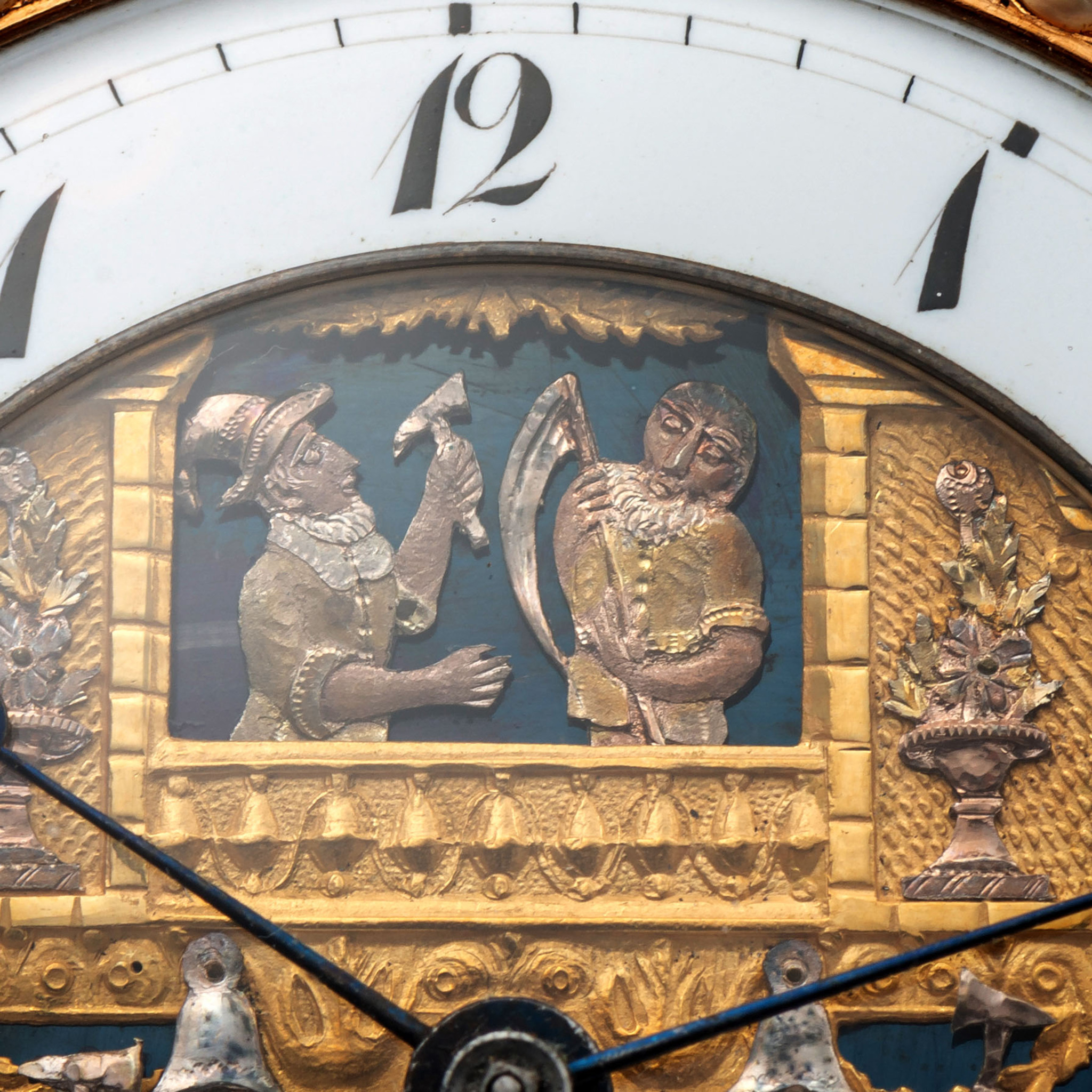 “Punchinello” In this uncommon automaton scene the figure of Punchinello enters the aperture at the top from the left when the pendant is depressed, after he has struck the hours he disappears, and the cherubs below then strike the quarters. This type of watch is so rare that Alfred Chapuis and Edmond Droz found only a movement to illustrate it in their book Les Automates, p. 180. Five other watches with this configuration have been already auctioned by Antiquorum: - Signed “François L’hardy (Geneva)” (dial damaged; formerly in the Ruschitti Collection). Antiquorum, Geneva, auction, October 13, 2001, lot 594, unsold (Estimation: CHF 15000.- / 20 000.-); Antiquorum, Geneva, auction, June 14, 2003, lot 183, unsold (Estimation: CHF 10 000.- / 14 000.-). - Signed “Duchene & Fils (Geneva), No. 4562” (dial damaged) Antiquorum, Geneva, auction, November 13, 2011, lot 198, sold for the amount of CHF 11 250.- - Signed “Berthoud No. 10 815” (dial damaged) Antiquorum, Hong Kong, auction, February 26, 2012, lot 157, sold for the amount of HK$ 150 000.- - Signed “Berthoud à Paris” (dial damaged) Antiquorum, Geneva, auction, November 10, 2013, lot 313, sold for the amount of CHF 15 000.- - Signed “Schuttleworth” Antiquorum, Geneva, auction, November 11, 2018, lot 344, unsold (Estimation: CHF 9 000.- / 14 000.-).
Square watches of the 17th century are extremely rare. Only eleven are known to exist: - Paul Bizot, Paris, circa 1645. The present watch. - Balthazar Marthinot, circa 1650. Louvre Collection. - Balthazar Marthinot, circa 1650. Private Collection. - Nicolas Lemaindre, Blois, circa 1650. Louvre Collection, Inv. OA 7026. - Pierre de Baufre, Paris, circa 1650. Musée National de la Renaissance, Inv., E.Cl. 12010. - Nicolas Gando, circa 1660, silver/enamel. Mentioned by Tardy. - Nicolas Gribelin, Blois and Paris, circa 1860, Damascus steel and gold. Private Swiss Museum. - Bretonneau, A., Paris, circa 1660. Formerly in the E. Gschwind Collection. - Louis Baronneau, Paris, circa 1660. Sold by Antiquorum on October 12, 1986, lot. 303. - Paul Bizot, Paris, circa 1660. Formerly in the Gschwind Collection. - Paul Bizot, Paris, circa 1660. Sold by Sotheby’s Zürich, in May 1977, lot 112. Paul Bizot Was chosen as Juré for 1687-89 by his fellow watchmakers in Paris, a proof of the high esteem in which they held him. Bizot died between 1689 and 1691, in which year his widow is listed in the rue de Harlay. The painting, in its manner and technique, closely resembles that of a magnificent round watch with a movement by Grégoire Gamot, now in the Walters Museum. It is also painted with flowers in the same tones of white and taupe, and dates from around 1645. Between 1620 and 1640 the Blois school was unchallenged in the art of painting on enamel. A goldsmith from Blois, Jean Toutin (born in Châteaudun), is credited with the invention of the technique between 1620 and 1630. As Toutin published six plates of engravings with designs for enameled watches in 1618-19, it appears that he developed the technique about that time. Toutin developed a true method of miniature painting, refining the existing technique (that of the Limoges school) and enriching the color palette. He conferred a precision, a sense of perspective, and a subtlety of tonal gradation that were previously unknown in miniature painting. Blois became famous throughout Europe for its enamels; watchmakers from England, Switzerland, and Holland sent for cases made in Blois (later also Paris), having movements made for them. These watches were costly objects and greatly appreciated. It is known that Mazarin and Richelieu gave such watches as handsome presents, most were decorated with mythological and biblical subjects, a few were adorned with flowers. In the early 17th century, flowers came to be considered a subject of great decorztive merit. During this period the florilegium, a collection of flowering plants intended as design sources, came into fashion. In 1611 J.T. de Bry began his work “Icones Plantarum”, devoted to garden plants. The art of painting flowers became an established custom, giving rise to the genre of the still life with flowers. The artist who painted the present watch most likely took his inspiration from Emanuel Sweerts “Florilegium”, first printed in 1612 and subsequently reprinted at least six times until 1654. Very few watches with this type of enamel have survived. The present watch represents the earliest manner of the Blois school of painting on enamel, exemplifying the techniques of Toutin and his pupils during the 1620s to the 1640s. There is little graduation of tone; the brush strokes have clean edges, whereas in the later “pointillistic” technique, tones were blended by means of the application of many small dots of paint. During this early period very few people knew Toutin?s secret. The case comes either from Blois or is one of the earliest Blois-type enamel cases produced in Paris. Formerly sold by Sotheby’s London, April 22, 1965, lot 150, and featured in their “1965 Review”. The watch is fully illustrated in Camerer Cuss, The Book of Antique Watches, London, p 68.