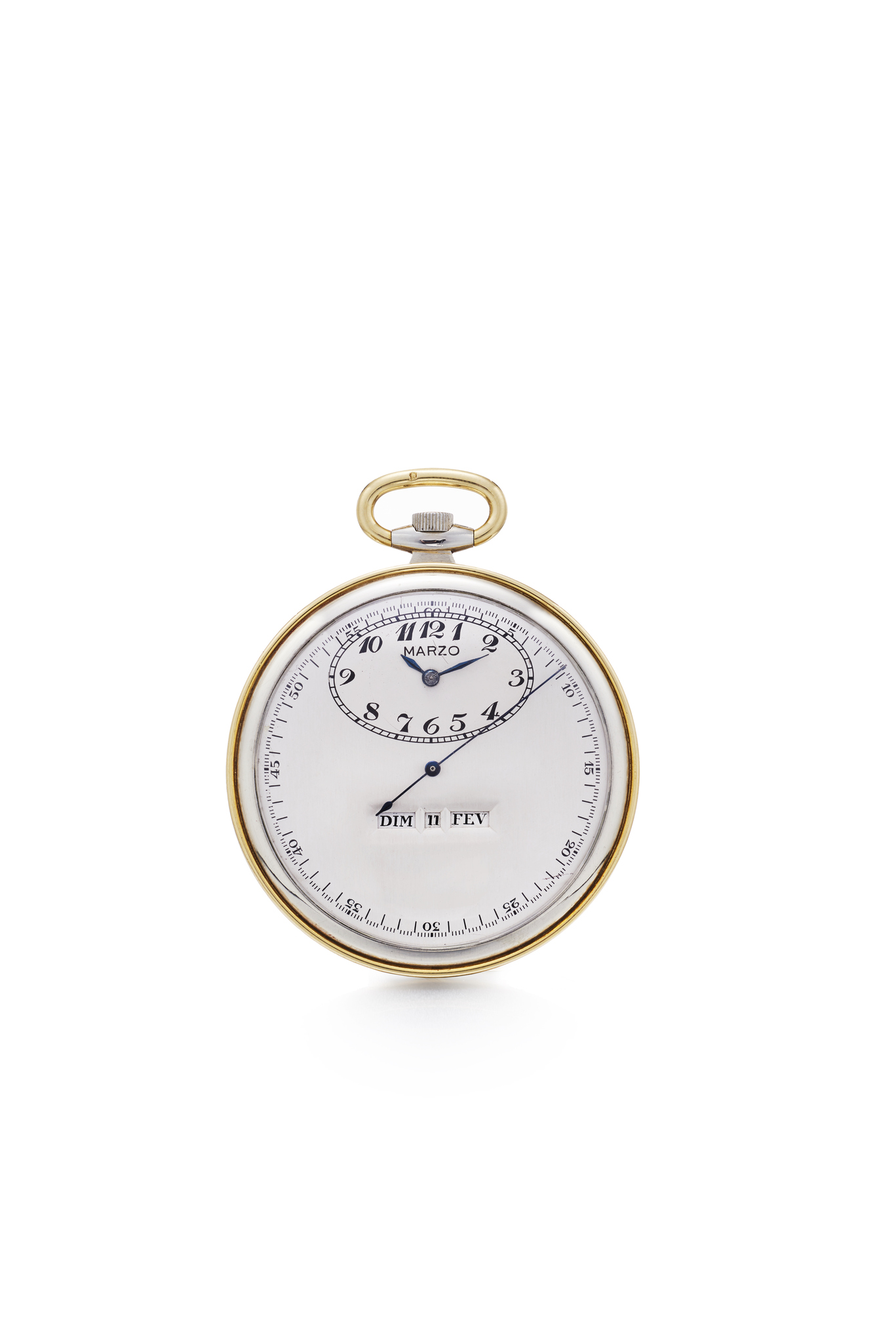 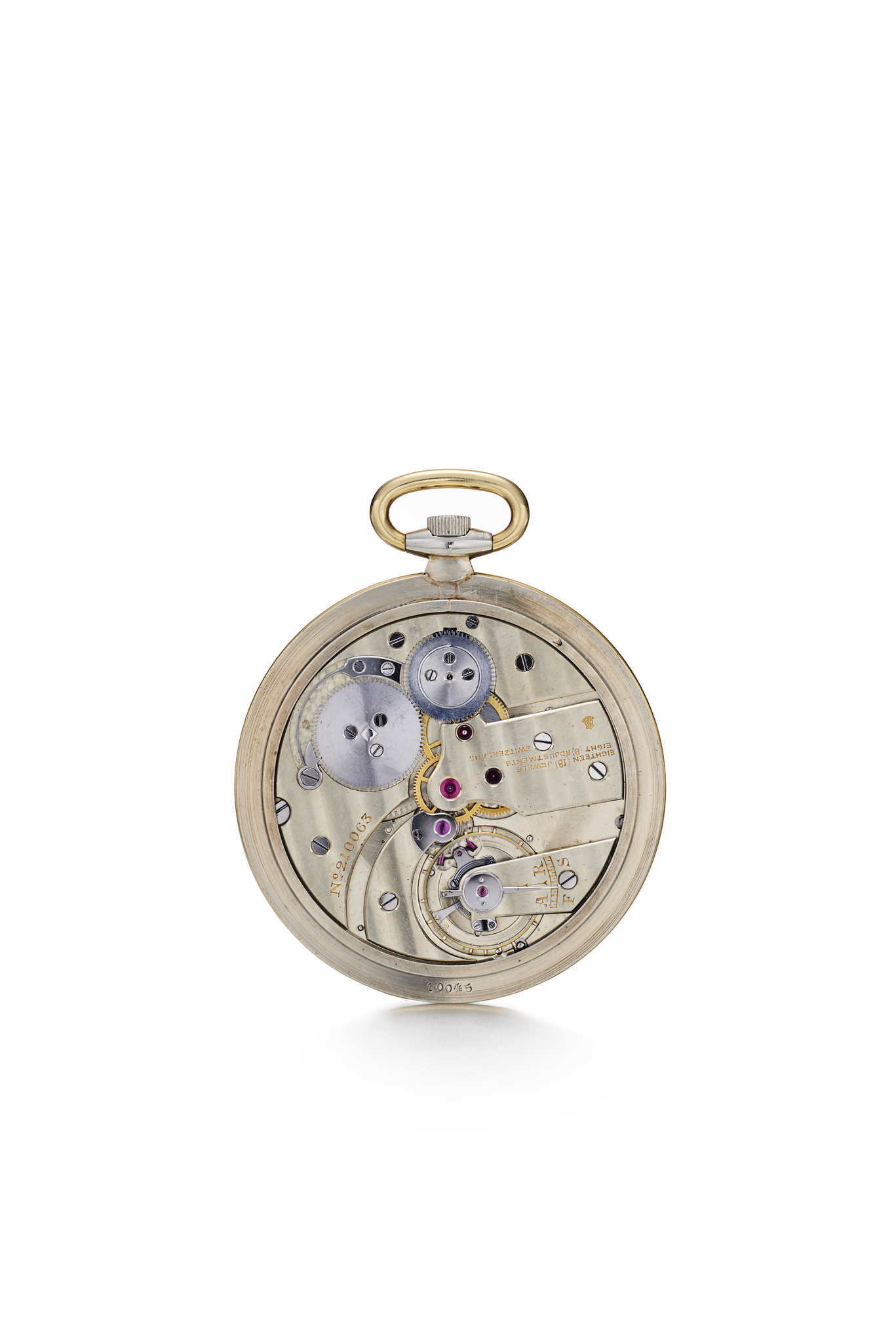 Model made for Marzo, Paris

Signature dial (by the retailer) and case

Marzo, Laurent (Lorenzo; 1865-1929) Lorenzo Raimondo Mariano José Marzo was born in Madrid on March 15, 1865. He is the son of Juan Marzo and Rosa Carles. His paternal uncle is Francisco Marzo († 1891), a famous Madrid jeweller and silversmith who works for the Spanish royal family. Lorenzo seems to learn his job at this uncle who at the end of his career is associated with the jewellers Garcia and Florès. In 1891, following the death of his uncle, their company was dissolved and Lorenzo left the following year, in September 1892, for Paris; he is 27 years old. On May 31, 1890, he married in Madrid Elvira Altuna y Aguirre (c.1867/1868- 1916); the couple (domiciled 22 Calle de las Infantas) will have three sons, including Rafael (Raphaël; † 1958) who will take over the business. In Paris, after working for several years as a craftsman-jeweller, Lorenzo Marzo ?? now Laurent ?? settled in 1901 on his own. On July 6 of this year, he filed with the service of the Guarantee of Paris his hallmark of master, with the initials “L M” and like different “a pincer”. His address is 207, rue Saint-Honoré. On March 3, 1911, Marzo joined forces with Eugène Laillet (a 10- year partnership with a capital of 750,002 francs). They have a shop, “Marzo & Laillet”, at 22, rue de la Paix; prestigious artery that place Vendôme leads to the Opéra Garnier. That same year, we note that Marzo is a member of the office of the Spanish Chamber of Commerce in Paris. He is also a member of the Chambre Syndicale de la Bijouterie. In 1914, the Marzo House opened a store in Biarritz (6, place de la Mairie), another in 1915, in Madrid (32 Calle de Alcalá), and another in San Sebastián in the Spanish Basque Country. It will later have a branch in Havana (Cuba) where you will find the creations of the house but also objects of art and Parisian trinkets. In 1915, the two partners, Marzo and Laillet, separate. Marzo remains alone at 22, rue de la Paix, while Laillet settles at 5, rue de la Paix. On March 8, 1921, Marzo had his master mark erased, which seemed to indicate that he stopped producing his jewels. On August 13, 1927, Laurent Marzo was made knight of the Legion of Honour (under the Ministry of Foreign Affairs, file No. 36 102). In 1928, he married, in second marriage, Jeanne Privé, who created in 1919 the “Maison de Décoration” (83, avenue Niel), an antique store. He died on January 20, 1929, at the age of 64, at his home in Neuilly-sur-Seine (52, avenue de Neuilly). He is buried in the Batignolles cemetery (in the same vault as his first wife). His son Raphaël continues the company Marzo. The workshop occupies many employees, many of whom have been trained by Laurent Marzo. In 1923, the company “L. Marzo” becomes “Marzo & Fils”. Raphaël Marzo is the husband of Conchita Cuesta; the couple with 4 children. At the Exposition internationale des Arts décoratifs et industriels modernes (International Exhibition of Decorative and Modern Industrial Arts), which is held in Paris from April to October 1925, the house Marzo receives a Grand Prix and is equal to the other major houses of Parisian jewellery (mainly located in the neighbourhood of place Vendôme and rue de la Paix): Boucheron, Cartier, Dusausoy, Fouquet, Lacloche, Linzeler & Marchak, Mauboussin, Templar, Van Cleef & Arpels, Vever, etc. In reports of the time, we note that the house Marzo is noticeable by the use of blued steel parts in the ornamentation of his Art Deco jewellery.