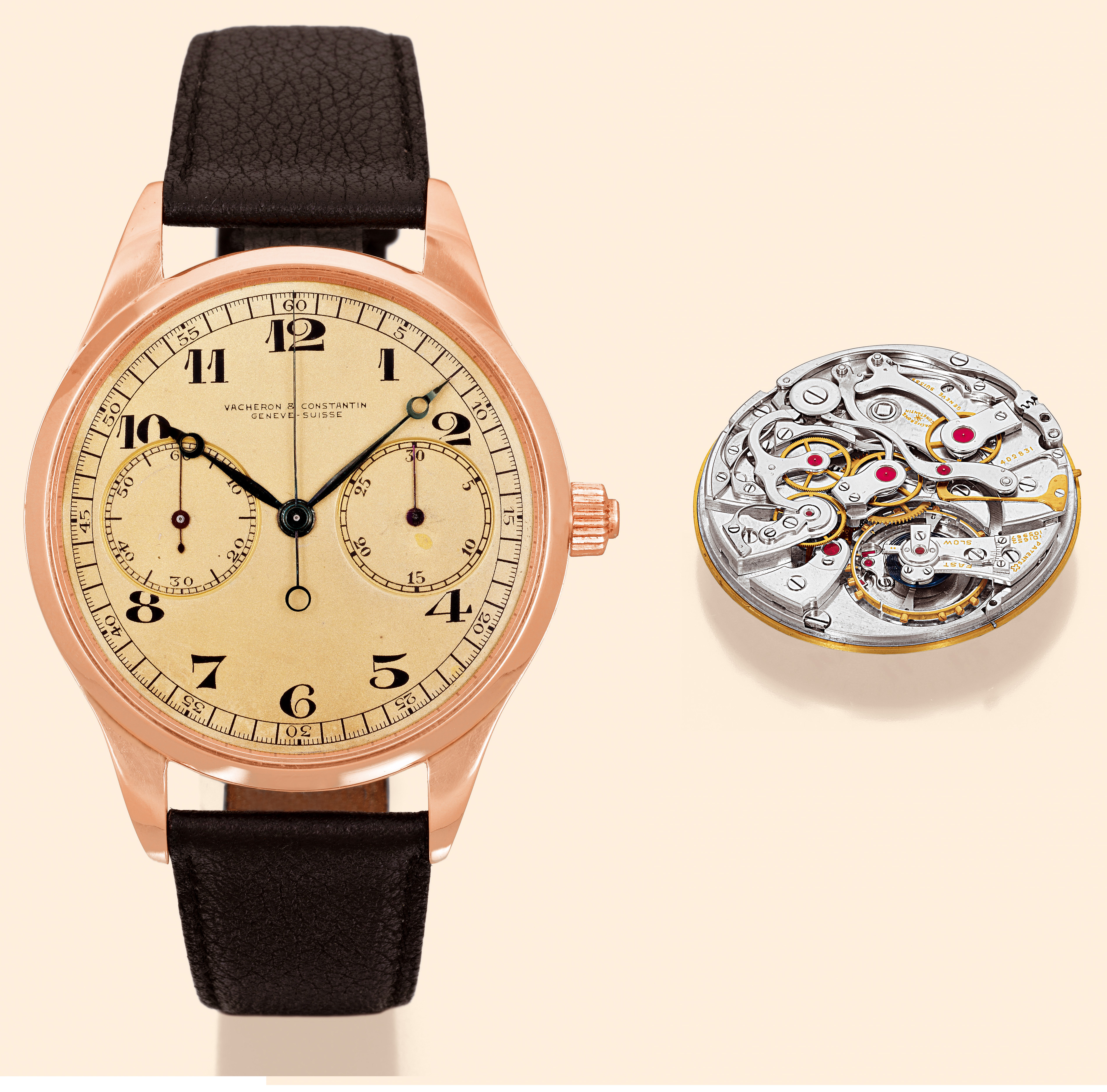 ?George V Royal Presentation, Aviator?s Chronograph? Vacheron & Constantin, Genève, No. 250752 / 402831, case No. 402831. Made on special order for the English Crown in 1925 and sold in 1926 via the Goldsmith?s Company. Presented to Admiral Richard Byrd in commemoration of his 1926 Arctic Expedition. Historically important and possibly unique, extra large and thin, gentleman?s 18K pink gold wristwatch chronometer with co-axial single button chronograph and register.

King George V George Frederick Ernest Albert, better known as King George V, was the king of Britain during World War I. He was born in 1865 as second son of King Edward VII and the grandson of Queen Victoria. From the early age of 12, he was trained for a career in the Royal Navy, eventually rising to the rank of Commander. His older brother died and he gained heir to the throne. At the age of 26, he had already acquired personal knowledge of outlying British lands that he had learned in the Royal Navy. In 1893 he married Princess Victoria Mary, the daughter of the Duke of Teck; Mary. Together they had five children who held court: King Edward VIII; Albert, Duke of York, later King George VI (upon Edward's abdication); the Duke of Gloucester; the Duke of Kent; and Mary, Countess of Harewood. It was he who changed the name of the royal house from Saxe-Coburg-Gotha to Windsor. In 1917, during World War I, he gave up the royal family's connections to all things German including titles. In 1911, George traveled to India for a ceremony to cement ties with that colony. May of 1935 was celebrated as the silver jubilee of his reign. He died on January 20, 1936. He was succeeded by his son, Edward VIII. Provenance: This watch was presented by King George V to Admiral Richard Byrd, after the Admiral?s North Pole flight in May, 1926. It subsequently became the property of Hermann Goering, as attested by the Vacheron Constantin Archives. After the Second World War, the watch became the property of an Oriental gentleman. Richard Evelyn Byrd Rear Admiral Richard Evelyn Byrd, USN (October 25, 1888 ? March 11, 1957) was an pioneering American polar explorer and famous aviator. He graduated from the U.S. Naval Academy in 1912 and entered the Aviation Service during World War I. He developed a passion for flight, and pioneered many techniques for navigating airplanes over the open ocean including drift indicators and bubble sextants. On May 9, 1926, Byrd and pilot Floyd Bennett set out on the first flight over the North Pole. They claimed to have achieved the pole, however subsequent evidence from their diaries and mechanical analysis of their plane, confirmed by the Norwegian- American aviator and explorer Bernt Balchen, has cast significant doubt on this; they likely turned back due to a mechanical problem just short of the Pole. Nonetheless, the expedition earned Byrd widespread acclaim, enabling him to secure funding for subsequent attempts on the South Pole. Byrd was awarded a Medal of Honor for the achievement. Aviator?s chronograph The Vacheron Constantin firm, which has always responded positively to special request, made a few watches especially for aviators. Among these is the ?aviator?s degree watch? sold by Antiquorum in the ?Quarter Millennium of Vacheron Constantin? sale on April 3, 2005, lot 114. Cased in ?Staybrite? stainless steel, it was based on a movement by Victorin Piguet and was produced in only three examples. The present watch, made on special request, is based on a movement by Louis Elisée Piguet. It differs from other Vacheron Constantin ?monopoussoir? chronographs both in size and design. Most of the mono-poussoirs known today are tonneau-shaped with a round opening for the dial and are much smaller in diameter. However, whereas the aviator?s degree watch was made in three examples, the present watch is believed to be unique.