18K yellow gold, entirely diamond-set with 170 baguette-cut diamonds (including 40 on a grid-plate dial) formed a bracelet of 32 rows(including the dial) and 30 others princess-cut diamonds on the bezel, whether a total of 200 diamonds, round-shaped, gentleman's wristwatch; the bracelet fully articulated. 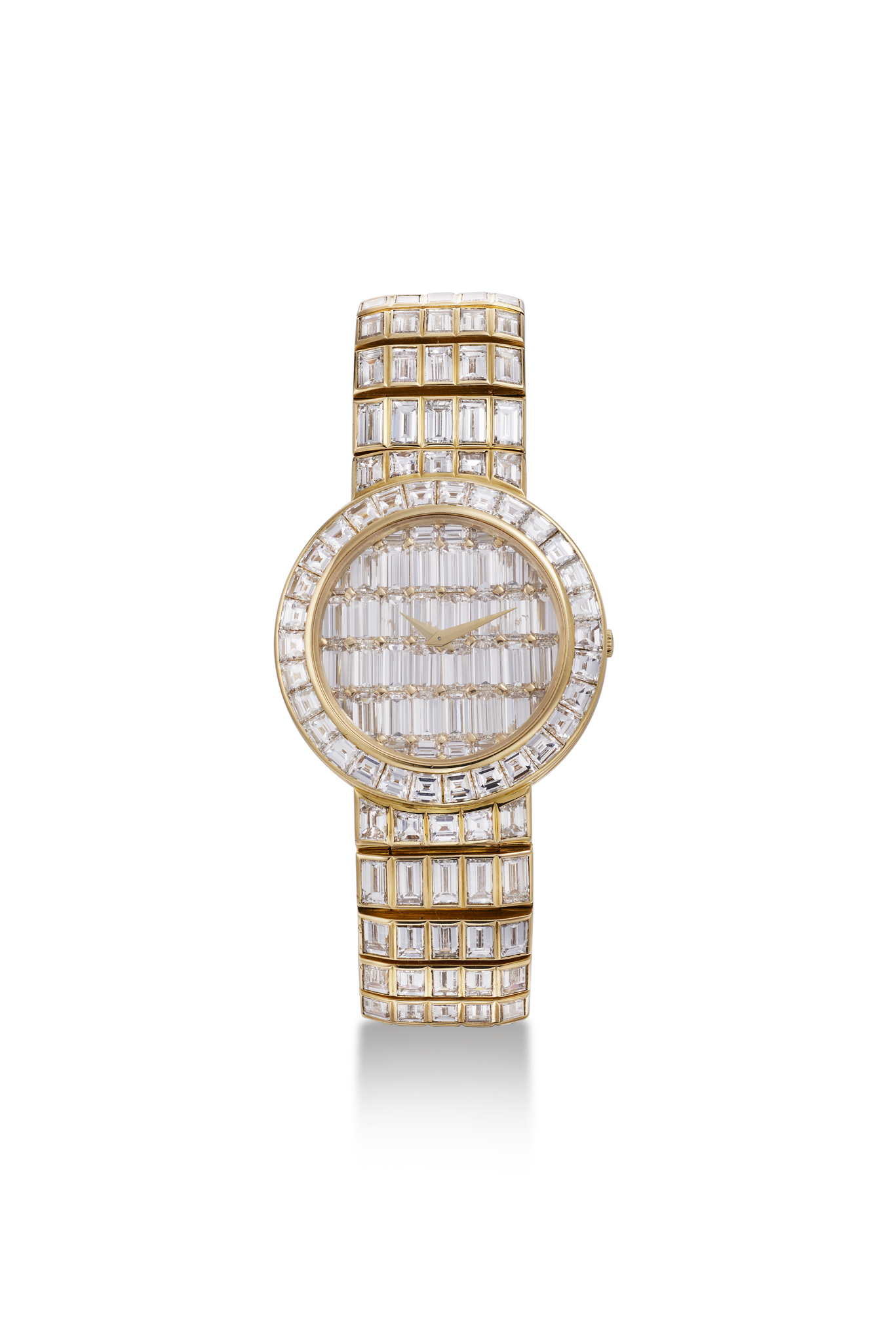 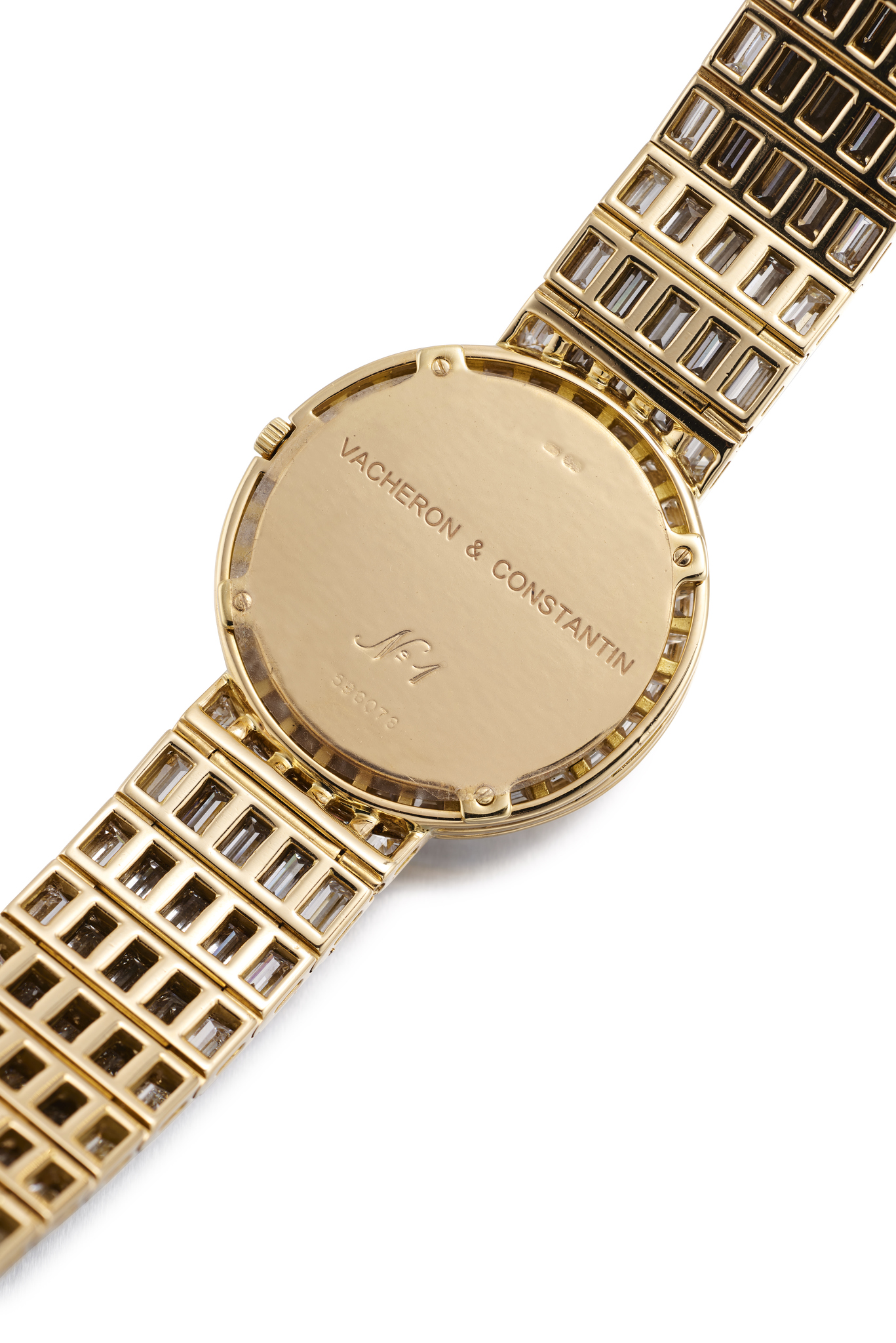 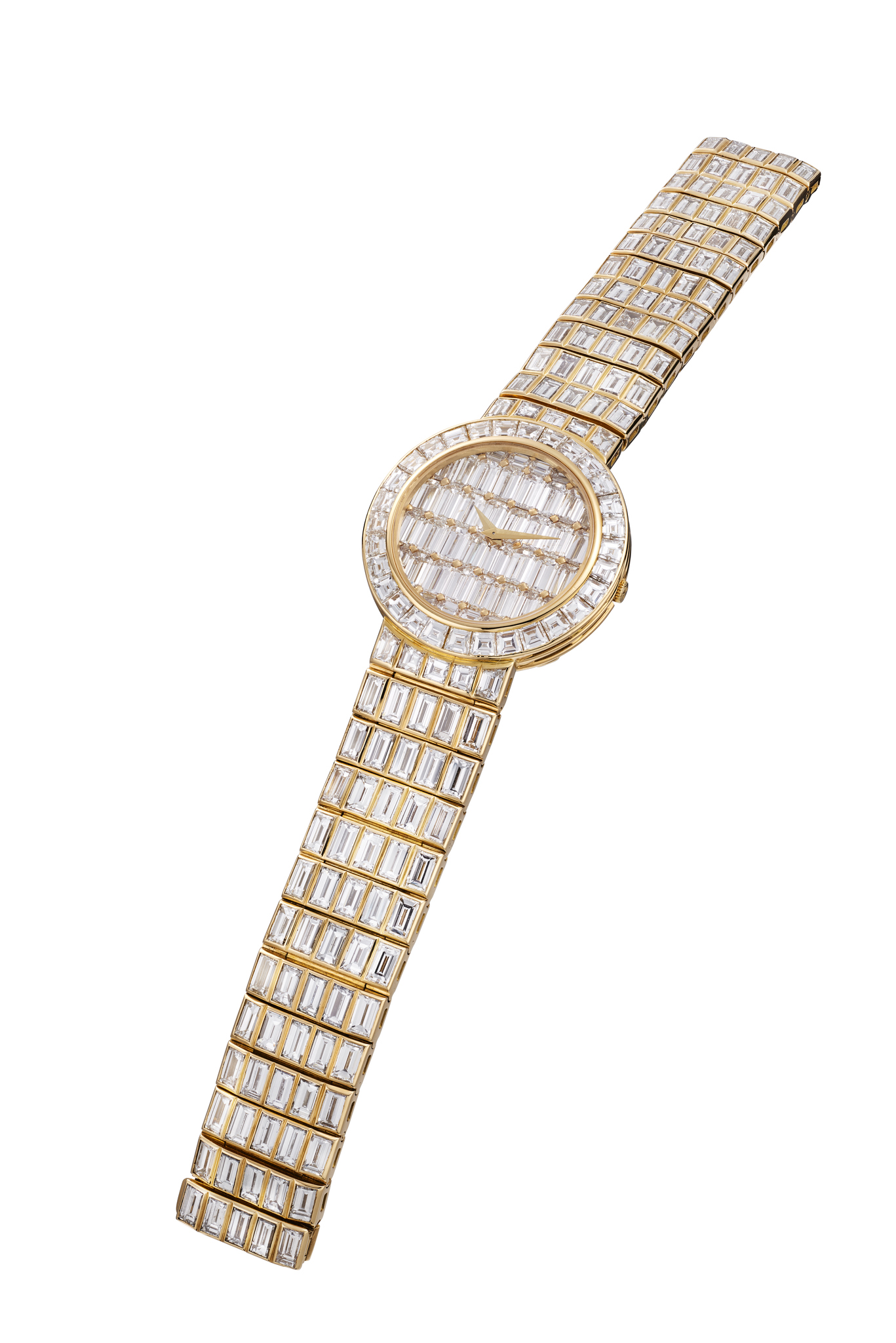 The Extract from the Archives, mentioned that this watch was manufactured in 1989. The Kalla Collection In 1979 Vacheron Constantin presented what was then the most expensive watch in the world: the “Kallista” (for US$ 5 000 000.-). It was designed by Raymond Moretti (1931- 2005), French painter and sculptor, a friend of Pablo Picasso (1881-1973) and Jean Cocteau (1889-1963). The watch was set with 118 emerald-cut diamonds, each accompanied by a certificate from the GIA. It required 6 000 hours of labour and took five years to complete. Even today, this watch remains the symbol of the Haute Joaillerie watch, and served as inspiration to the entire Swiss watch industry as well as to the trade press. There was much speculation as to the identity of the buyer! Such was the impact of the watch that today, near 40 years later, one still finds occasional articles devoted it in the trade press. The Kallista, in Greek, “the most wonderful”, with its 118 emerald-cut diamonds (a total of 127.34 carats.), its 141 brilliant-cut diamonds (a total of 18.74 carats) and a total weight of 155 g., will always stand out among Vacheron Constantin’s production. However, it was extremely influential: a new generation of watches inspired by the Kallista, called “Kalla”, became available in the early 1980’s. “Lady Kalla” set with 108 emerald-cut diamonds, with 26 others on the dial, was specially designed and made for Diana (1961-1997), Princess of Wales, on the occasion of her marriage in 1981 to Prince Charles (b.1958). From 1988, the watches from the Kalla Collection were offered to the public, but always in very limited quantities and sometimes only one at a time. They were in white or yellow gold, for men or for ladies, and had either leather straps or diamond-set bracelets. The Vacheron Constantin designers showed great creativity; the watches of the Kalla Collection are no longer of one shape. One finds Kallas that are rectangular, round, tonneau-shaped, dodecagonal, hexagonal, etc. There seems to be no limit ?? among the watches offered there are “Rome Kallas”, “Geneva Kallas”, “Venice Kallas”, but also “Lady Kallas”, “Queen Kallas”, “Earl Kallas”, etc. In all, there are approximately 30 different styles, available in yellow or white gold, set with diamonds or precious stones, such as emeralds, sapphires, or rubies, and featuring approximately a hundred different references. Among Haute Joaillerie watches, the Kalla Collection holds a special position, due largely to the audacity of the Kallista, but also to the great variety of models that were offered to the public, all different yet all sharing the common denominator of the lavish use of precious stones.