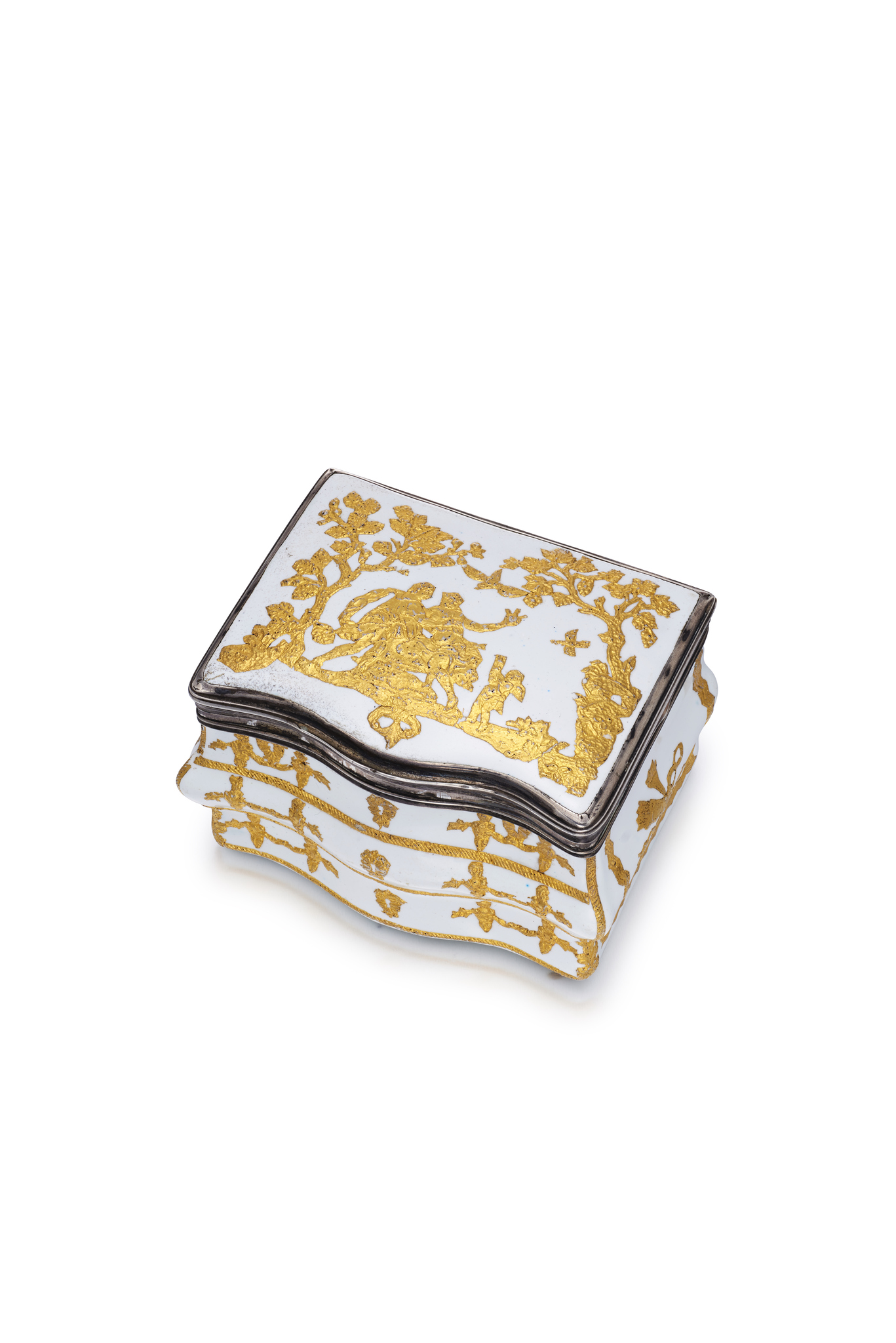 price The Fromery workshop In the early 18th century, French “tabatières” (snuff-boxes) made of gold and enamel or of other precious materials, were quite fashionably in Europe and especially in Germany. These were mostly used for the storage of snuff tobacco, but also of powder ?? under the name of “poudrier” ??, pills and candy or dragees ?? under the names of “bonbonniere” and “drageoir”. In 1740, the ascent to power of Frederick the Great (1712-1786) in Berlin meant soon a restriction to their import from France. The goal was then to encourage the local production of such wares. Frederick was himself a great collector and user of such snuff-boxes, exactly like Count Heinrich von Brühl (1700-1763), the head of the Meissen Porcelain Manufactory. Wares of toilet sets and small boxes with white enamel take the name of “émail de Saxe”. Their chief feature is the gold relief foils and the colourful painting on the white enamel surface. This technique was mostly used in Dresden by the workshop of Johann Melchior Dinglinger (1664-1731) and in Berlin by the workshop of the Fromery family but also by different craftsmen in Augsburg. Small boxes which are decorated like this present one, are mostly attributed to the Berliner workshop of Pierre Fromery (1655-1738), who was an émigré ?? a Huguenot ?? from France, who was active in Prussia as an accomplished clock- and box-maker, steel-cutter and armourer. He works with his two sons, Charles Fromery (1685-1738) and Alexander Fromery (1695-1775). After the death of Pierre and Charles in 1738, Alexander took over the workshop. He was moreover a dealer in luxury wares, who made since 1733 business with the Meissen Porcelain Manufactory. it is interesting to note that a painter on enamel, Christian Friedrich Herold (1700-79), worked in the workshop of the Fromerys, but he joined in 1726 the Meissen Porcelain Manufactory. He then transferred there the technique of the application of gold foils. Besides, Herold has contributed to the development of the refined painting of the Porcelain Manufactory, which he has ennobled and evolved. However, Herold was still active for the Fromery workshop, despite the protests of the director of the Manufactory, decorating plaques, boxes, cup and beakers with pictorial subjects in a combination of foil and painting. As we see in the study of objects, the production of luxurious wares in Berlin of the 18th century was strongly influenced by Parisian examples. A secure attribution of enamel boxes to a specific workshop in Berlin is sometimes difficult, due to the lack of marks or signatures. According to latest research, the hypothesis has been expressed that many enamel parts were made in Berlin and imported into Paris by marchands-merciers, where they were finally mounted and marked. On this matter, compare three boxes with white enamel and gold foil applications in the Metropolitan Museum of Art (Inv. 1993.336; Inv. 1975.1.1551; Inv. 1975.1.1551; the first one has the exactly same shape, sizes and a very similar decor). We also know watchcases decorated with gold foil encrustation, with a few rare examples signed by G. Bouvier, a craftsman who was to be active in Paris around 1740, even in Geneva (see: Walters Art Museum, Baltimore; Patek Philippe Museum, Geneva; etc.). Bibliography Le Corbeiller, Clare, The Robert Lehman Collection, Decorative Arts, Vol. XV., New York, The Metropolitan Museum of Art in association with Princeton University Press, 2012, pp. 154-55, No. 72 and 73.