THE ART OF BREGUET

Case: 18 ct., three body, collier form, by Mermillod, No. 371, in silver, engine-turned à grains d'orge, with rims in gold, the reeded band with monogram "S" in blue champlevé enamel on a circular gold plaque, affixed to the middle of the back.
Dial: White enamel, by Borel, No. 28, signed: " Breguet", with Breguet numerals and secret signature under "12". Blued-steel souscription hand with tapered point.
Movement: Gilt brass, 25"' signed: "Breguet, No. 258", of experimental caliber, as used by Breguet for the first souscription watches, with central barrel, retained along with the wheels by a single plate. Overhanging ruby cylinder escapement with gilt brass escape wheel, threearm plain brass balance. Blued -steel flat balance spring with bimetallic compensation curb on the regulator.
In good condition. Diam. 61 mm. 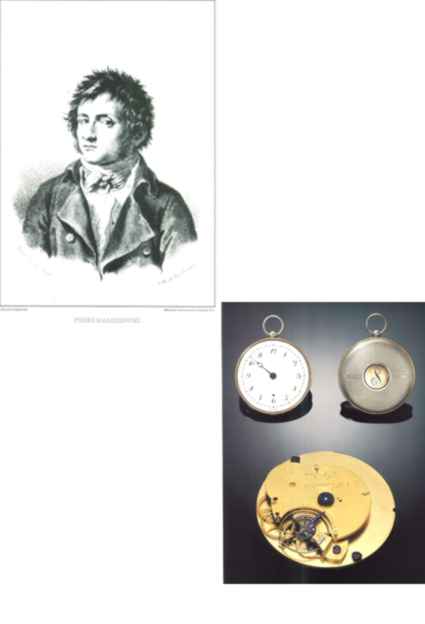 Note: In approximately 1794, whilst exiled in Switzerland, Breguet conceived the idea for his souscription watches, but it was after his return to Paris that he began their construction. The caliber for the movement was developed in stages, the first being a single handed watch with the barrel in the centre (see G. Daniels, The Art of Breguet, p. 170, figs. 127 a-c, and 128 a-b) and the balance mounted beneath the dial, both examples known being fitted with a lever escapement. This watch, no. 258, also very rare, is an example of the intermediate stage, incorporating an over-hanging cylinder escapement, parachute shock protection, a bimetallic compensation curb, and the wheeltrain layed out in exactly the same way as the final version; the only difference being the use of a single small "back plate" instead of bridges.
PIERRE MALESZEWSKI (PAUL-JEAN) (1767 - 1828) Pierre Maleszewski, politician, economist, publisher and historian, was the natural son of Michel Poniatowski and Marie Maleszewski. In 1786, he was sent to Paris by his father, who was in fact the brother of Stanislas August Poniatowski, King of Poland. He became a member of the french masonic lodge dedicated to la Réunion des étrangers de l'Est de la France, which, alongside his connections with the press enabled him to further certain polish interests, whilst at the sanie time acting as an informant for his King. After a brief return to Poland in 1792, the King again sent him on a new political mission, and he arrived in Paris in January 1793. As a result of his correspondence being intercepted, Maleszewski was arrested, but subsequently released through the intervention of General Sulkowski, although he was forced to hide out in the capital due to the unrest created by the assassination of Marat in July 1793. Towards the end of the same year, he married Victoire-Françoise Venture de Paradis, the daughter of his friend Jean-Michel, Professor of oriental languages, which enabled him to reappear in public again. Following the death of his father, and the end of the French Revolution, he became a confirmed Republican. His literary output was extensive and varied; two books written in polish covered the English parliament and the interrelation between agriculture, business and craft. In 1795, he published: Recherches politiques sur l' état ancien et moderne de la Pologne, appliqués à sa dernière révolution under the pseudonym J.Ph. Garran. In 1798, General Bernadotte appointed him as his secretary at the French Embassy in Vienna, and a year later when the general became Minister of Defence, Maleszewski returned with him to Paris. Quitting the field of military administration in 1801, he launched himself into the world of business in the Ukraine, writing a paper entitled: Sur le connuerce avec la Mer Noire; his ideas apparently met with the approval of Napoleon, for by 1802 he was a major shareholder in various commercial enterprises in Odessa, and the following year established direct trade links with France. In 1803, following the settlement of his inheritance, he returned to Paris, but found himself in opposition to both the politics of Napoleon and his native Poland. Despite a cataract in his eye, discovered in 1823, Maleszewski continued his writing; his final work: Essai historique et politique sur la Pologne depuis son origine jusqu'en 1788 was published posthumously. He died in 1832 at the house of his second wife, Jeanne, daughter of his friend J.Ph. Garran, at Maisonneuve near Chatellerault.