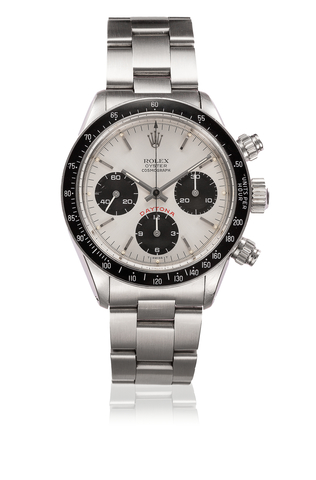 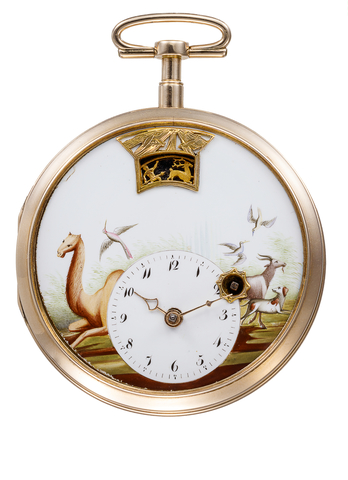 18K yellow gold, open-face, key-winding, round-shaped, pocket watch, with wandering automata (aperture at 12 o'clock) On the dial, the scene painted on enamel on copper shows, on the right, a dromedary sitting. 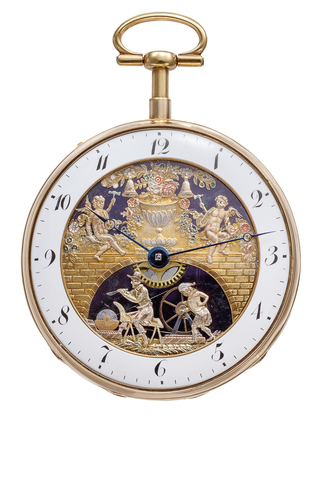 18K pink gold, open-face, key-winding, round-shaped, pocket watch, with one horological complication and automaton scene: Quarter-repeater on two steel gongs (activated by depressing the pendant), leading the two striking Jacquemarts (jacks) and also an animated scene with four functions The chiselled scene depicting: on the left, a knife-grinder at work, his grinder-wheel turning, sharpening a knife; at the end of the striking, he gets up and observes the quality of his work; on the right, an apprentice pulls the grinder-wheel by the force of his arms;, thanks to a big pulley-wheel, that drives the grinder-wheel Cuvette (dome) decorated with a scene in vari-colour gold representing a young woman playing the lyre; this cuvette (dome) is engraved with an apocryphal signature "Jaquet Droz". 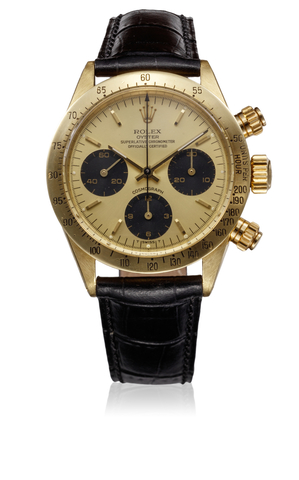 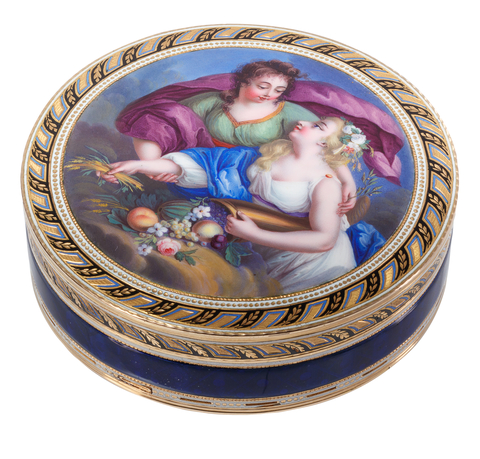 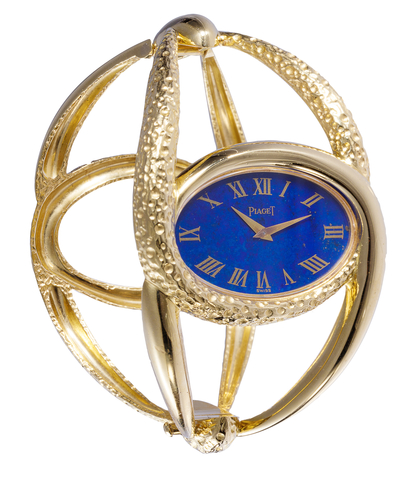 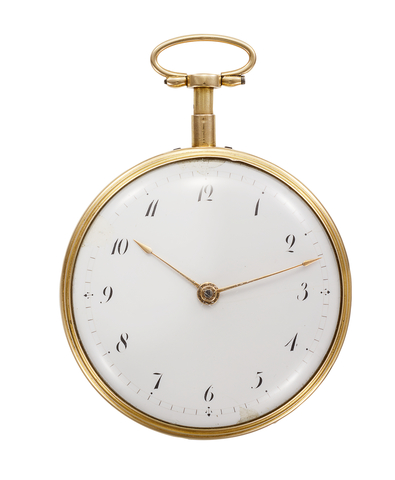 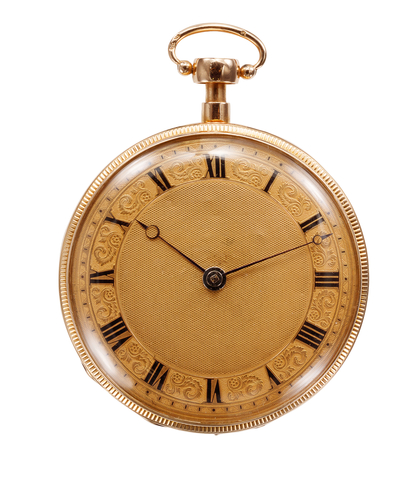 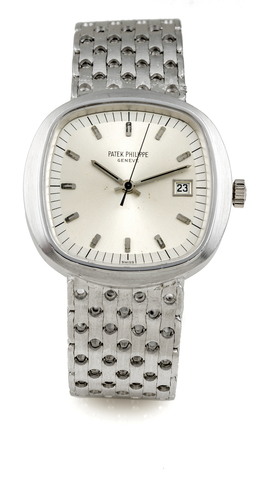 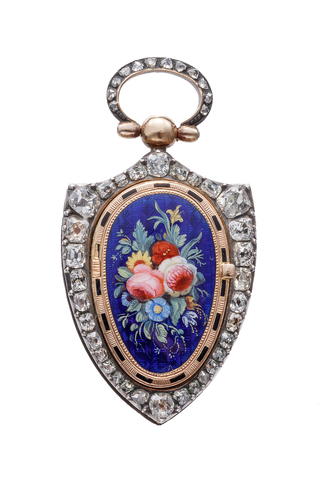 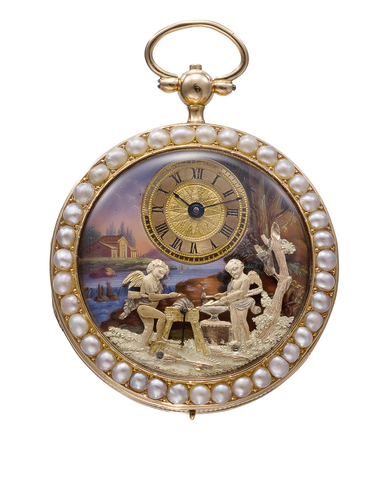 UNSIGNED, ATTRIBUTED TO HENRY CAPT OR PIGUET & CAPT "THE FORGE OF LOVE" - WATCH WITH AUTOMATON SCENE AND MUSIC

18K yellow gold, enamel pearl-set, open-face, key-winding, round-shaped, pocket watch with automata and music: Animated scene triggered upon request (activated by the button at 5 o'clock), with four functions, Musical train with a melody on a pinned drum with seven polished steel vibrating blades mounted in one stacks on the main-plate The scene depicting two cherubs busily working in a forge; one is forging weapons for Venus while another sharps the arrows. Royal blue flinqué enamel (translucent enamel over guilloché engine-turning) case-back. 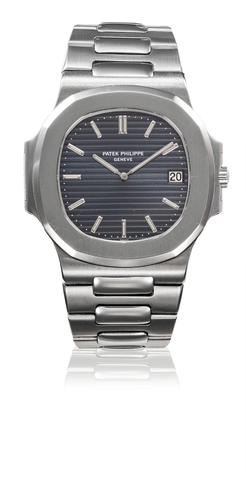 Accessories Certificate of identity and guarantee of origin, 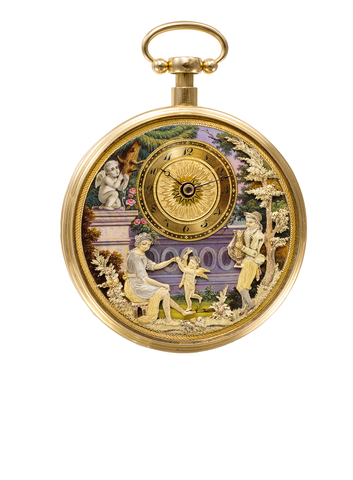 18K yellow gold and enamel, open-face, key-winding, round-shaped, pocket watch with one horological complication, automata and music: Quarter-repeater on two steel gongs (activated by depressing the pendant), Animated scene triggered upon request (activated by the button at 5 o'clock), with two functions, Musical train with pinned-barrel and eight blued steel tuned blades mounted in two stacks of four set between the plates The scene depicting a young man standing against a tree, playing his lyre, for a sitting maiden, playing with a frisky Cupid jumping on her foot. 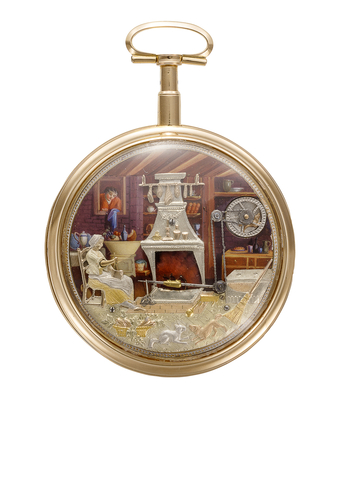 18K yellow gold and enamel, double open-face, key-winding, round-shaped, pocket watch with animated scene triggered upon request (activated by depressing the pendant), with five functions. The scene depicting: At the top, on the right, the wheel of a spit is in motion; Inside this one, a small mammal hops and trains it; In the centre, a chicken, on its spit, turns and grills in front of a fire; Behind, at the bottom of the chimney, the flames crackle; On the left, sitting on a chair, a woman grinds with her right arm a mixture in a pestle, placed on her thighs, which she holds with her left arm. 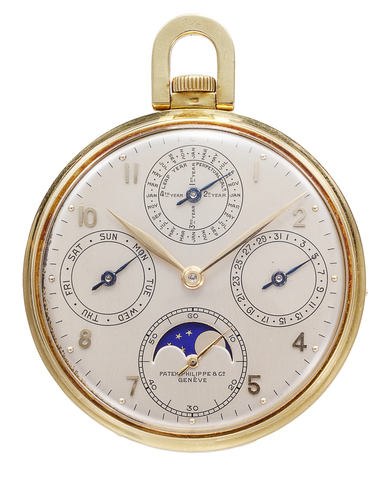 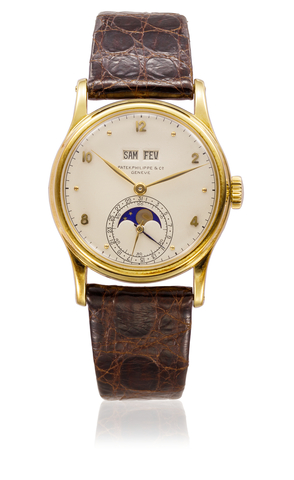