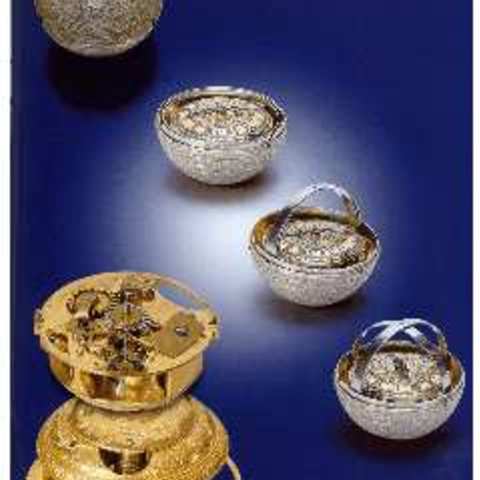 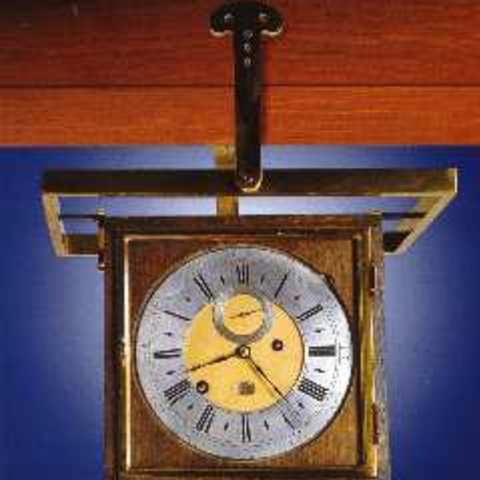 Henry Sully à Versailles Invenit 1721 et Fecit 1724.An important and only recently discovered eight day Marine Timekeeper of the historically famous small group made by Sully and termed by him Pendules à Levier. This example, for which evidence exists that it is almost certainly Sully's third such timepiece, is one of only two known to have survived. It is a remarkable work offering hour and quarter striking as well as calendar in addition to most of the extraordinary features described and illustrated in Sully's 295 pages work dedicated to LouisXV and entitled Description abrégée d'une Horloge d'une nouvelle invention pour la juste mesure du Temps en Mer? Par Henry Sully, Horloger de S.A.S Monseigneur Le Duc d'Orléans, Paris 1726.Pendule à Levier, described by Sully as "C", this clock, together with Sully's "A" and "B", Harrison's Nos. 1, 2, 3, 4 and 5, Pierre Le Roy's "A" and "S" and Ferdinand Berthoud's Horloges Marines No. 6 and No. 8, can be considered as one of the 12 most important early timekeepers related to the discovery of the Longitude at sea.

C. As found it stood upon a rectangular ebonised wooden display base of much more recent origin. The clock has now been rehoused in a wooden case suspended in brass gimbals in conformity with the system shown in plate 3 of Description abrégée d'une Horloge d'une nouvelle invention pour la juste mesure du Temps en Mer?, and as intended by Sully to be suspended from the deck-head of a ship. D. Circular dial with matted centre, engraved and silvered chapter ring with Roman numerals and outer Arabicminute ring, subsidiary seconds ring below Chapter XII and calendar aperture above Chapter VI. The blued steel hour hand began life in the characteristic French fleur-de-lys form but lost its "ears" in the post-Revolutionary period when any object, decoration, or inscription conceivably reminiscent of the French monarchy had to be destroyed or defaced under penalty of confiscation. M. The two train movement is very much in the English style, having sturdy brass plates separated by five latched pllars. The dial feet are attached to the movement by the same method. All latches are numbered, as are the pillar-ends. The movement plates have high-arched tops. The back arch encompasses the top half of a large circular "window" made to show off the large vertical balance and the two anti-friction wheels supporting the back balance pivot. The escapement is Sully's famous, two-plane, dead-beat, frictional-rest type which bears his name. The pallet-discs are made so as to be reversible on theirrbor, in order to offer a choice of two differing inclinations of impulse planes. The escape wheel teeth have been repeatedly recut and now are little more than pins. The plain brass balance, which has had a ring added to it to make it heavier, has no spring. It beats half seconds. Its arbor extends backwards to a cock behind the movement plate and carries a crank and a connecting-rod reaching downwards to support a horizontal lever (the levier) pivoted at one end and weighted at the other. Whenthe balance is in motion, then the lever is alternately raised and lowered by the connecting rod. The going train employs a fusee (without maintaining power) driven from a large barrel and powerful spring through a strong gut line. The striking train is driven by a going-barrel, and employs a two sided rack in the manner of Thiout. The hours are struck in passing from a single train and hammer upon a deep-toned bell and one-blow quarters upon another of higher pitch. There is a Strike/Silent levr in the dial high up on the right beyond the minute ring. The front pivot of the third pinion of the going-train, carries the seconds hand.Signed on the back plate: Henry Sully à Versailles Invenit 1721 et Fecit 1724.Scratched on the front plate under the dial : Enderlin de Bâle - fait en 1724 Pour Monsieur de Sully.Dim. 33 x 32 x 19,5 cm. 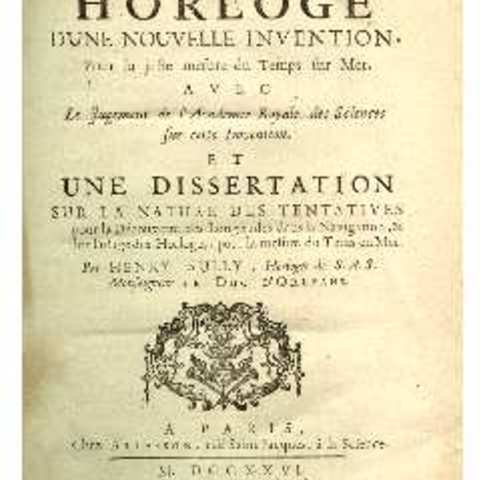 Paris, janvier 1726In 4°, 294 pp + errata and folding plates.Full calf, ribbed back with inlaid remaining of the original binding. 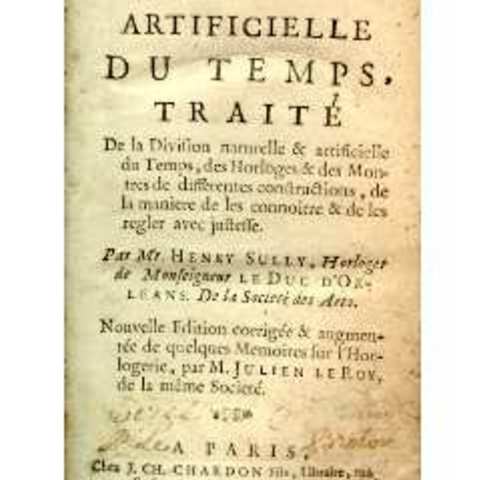 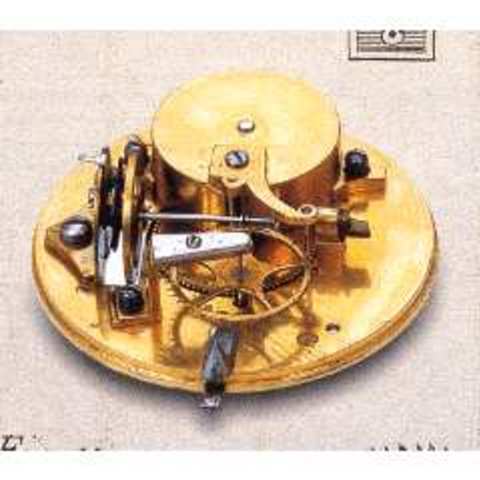 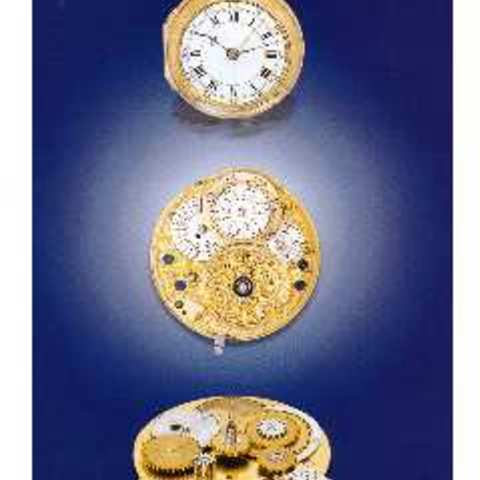 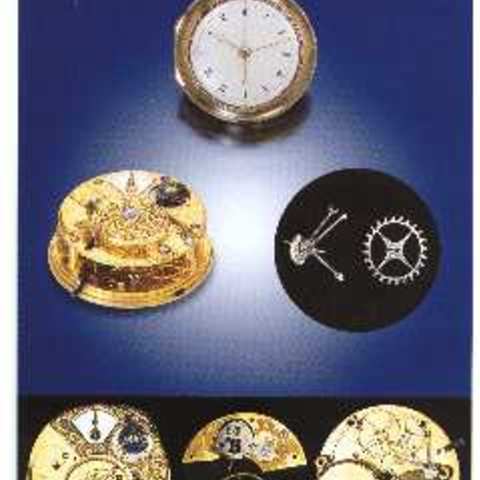 Josiah Emery, No. 661, produced in 1774.The first lever watch made by Josiah Emery, the second Lever Watch ever made after that executed by Thomas Mudge in 1769 for King George III.Gilt brass, pair cased, centre-seconds stop watch.

C. Gilt brass pair case, custom made circa 1795, both polished. D. White enamel with Roman numerals and outer minute and seconds ring, custom made from the same period than the case. Gilt brass hands.M. Hinged gilt brass full plate, regular English calibre, fusee with chain and Harrison's maintaining power, the mainspring set-up is of the type typically associated with Emery. Unusual arrangement of the centre-seconds driving wheel so that the centre seconds hands can be stopped independently from the movement. The train count determine a balance frequency of 36,000 beats per hour, extremely high frequency, probably unique for an 18th century watch. Lever escapement of experimental type withighly polished steel wheel of "flat wheel cylinder" type, the lever with simple pointed pallets, one jewelled, the other steel. The banking is achieved with extensions to the pallet arms which stop on top of the escape wheel teeth. There is apparently no draw on the pallets. The fork and roller action simply consists of two independently friction-mounted "D" section pieces on the staff, rotatable so that the shake in the fork can be adjusted closely. Plain gilt brass three-arm balance with two sall steel poising screws eccentrically mounted, and inset in the rim. Blued steel balance spring with a long straight tail, controlled by curb pins to effect the corrections for temperature changes by means of "Chelsea Bun" type compensation, the curb is mounted on a sliding steel frame, which can be racked sideways to adjust the watch for meantime, by moving the curb pins along the tail of the balance spring.Diam. 54 mm. 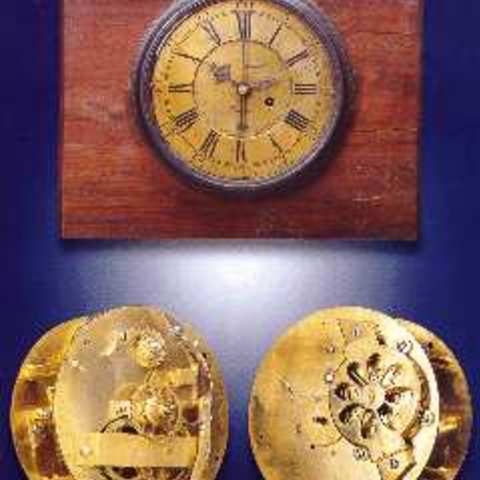 William Smith, London, H. Morton Invented,circa 1770.A rare, possibly unique centre seconds timekeeper of historical interest for use on board ship, mounted in a solid block of teak inset with a plaque inscribed "Sir John Franklin - Ships Clock from the North West Passage 1845-1847 - Mounted in a log of teak from H.M.S. Hindustan, a man-of-war, built entirely of wood, 1854". 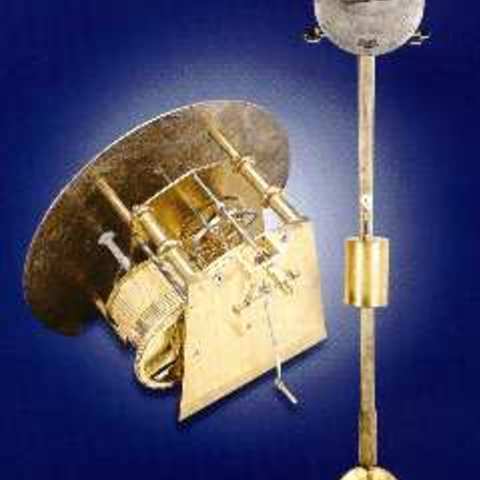 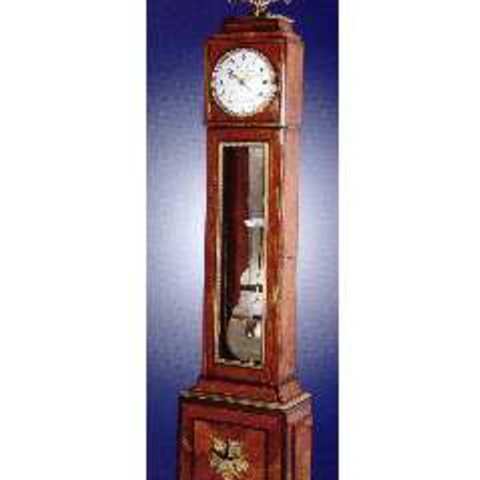 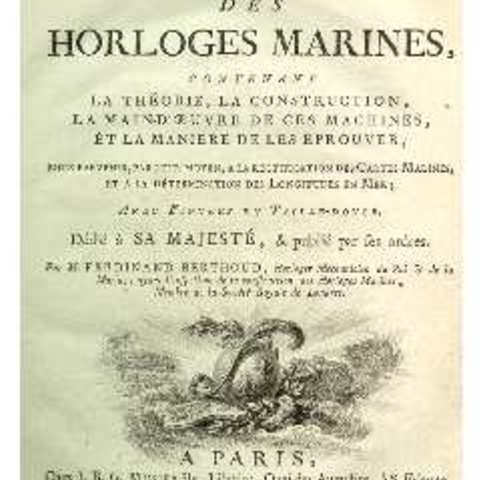 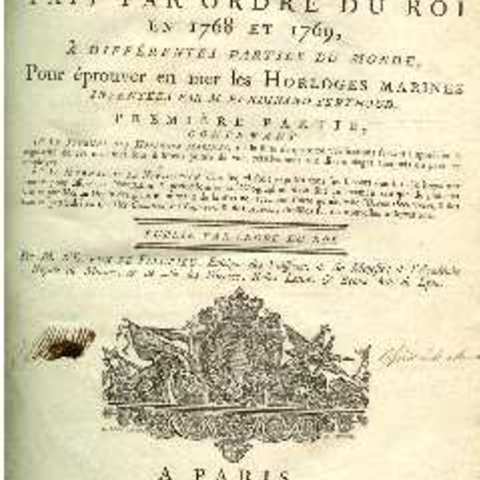 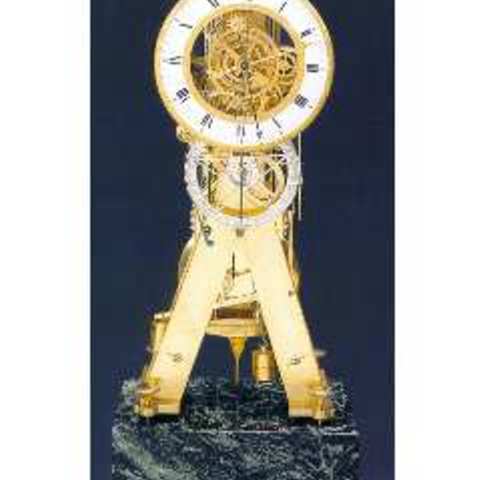 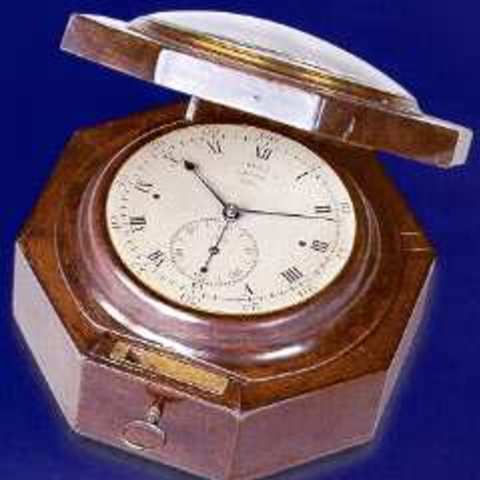 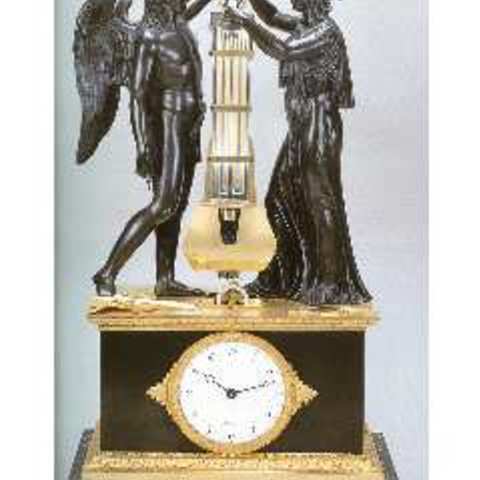 Breguet No. 453, Pendule Pyramidale, Génie et Prudence, sold to Monsieur de Pourtales on October 22, 1806, for 3000 Francs.Extremely fine bronze and ormolu precision mantel regulator. One of the four precision clocks from the prestigious series of Pyramidales, made by Breguet with the magnificent bronze figures by Pierre-Philippe Thomire.

C. Portor marbel base standing on four gilt bronze engine-turned bun feet. The pendulum is hold above the escapement by two allegorical figures, featuring the Genius and the Experience. D. White enamel attributable to Dubuisson with Breguet numerals, the subsidiary seconds shown on a small silvered revolving chapter ring driven by the escapement. Blued steel Breguet hands. M. Brass rectangular with cylindrical pillars and two going barrel wound separately. Highly unusual form of pivoted detent ecapement with twin escape wheels each with four ratchet teeth, one for locking, the other for the impulse on the jewelled pallet of the pendulum. Half second beating gridion pandulum with knife edge suspension.Signed on the dial and back plate.Dim. 63 x 34 x 21 cm. 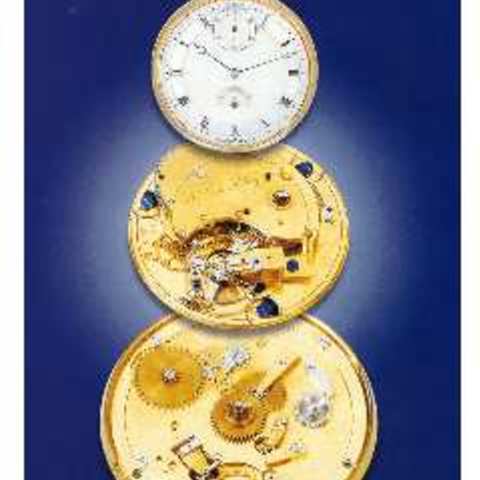 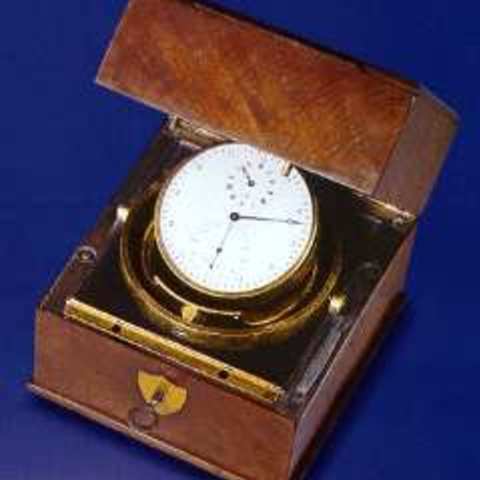 Breguet & Fils, No. 2897, Horloge Marine, lettre K, sold to Ducom on October 17, 1816, for 1500 Francs.Rare and fine mahogany marine chronometer, similar to those produced in the workshop of Louis Berthoud. 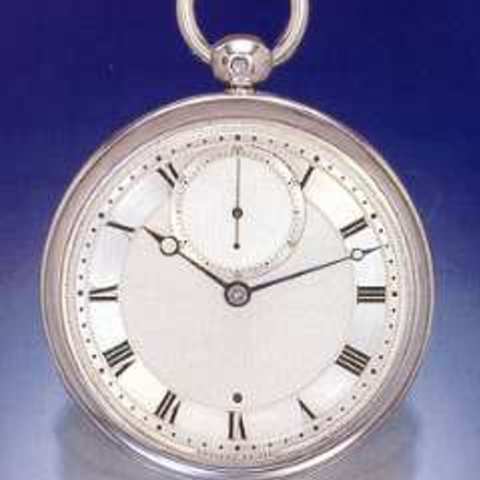 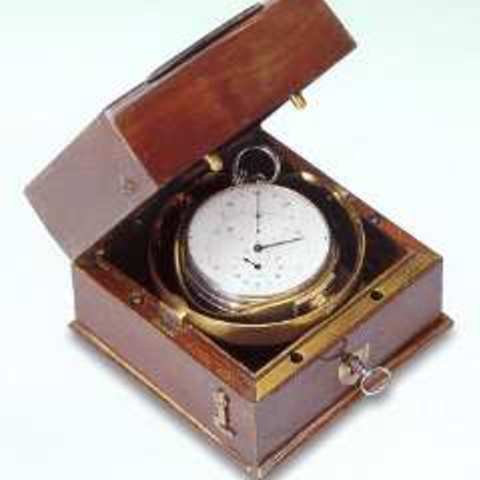 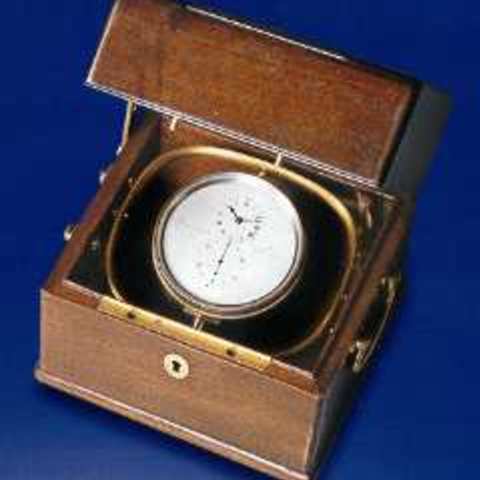